a few weeks ago, i came across a website of listings for free field trips offered by all sorts of sponsors.  while i browsed through the offerings, i came across something interesting - an earth day-themed trip to ralphs grocery store, only offered during the month of april, where the kids would get a tour of the store while learning how to make an impact on the issue of saving the environment.  with our daisy troop working diligently on earning the rest of their petals before the end of the scouting year in june, i thought this would be a great way to get us out of our usual meeting place for a change.  plus, we'd get a double whammy - the trip would earn us both the "use resources wisely" and "make the world a better place" petals.  BOOM.

the local school district has spring break this week, while the bean's isn't scheduled till next week.  but with good friday off, i figured it would probably be okay if i pulled her out of school at lunchtime on thursday so that we could make the field trip happen.  she was more than happy to break out of class early, and off we went to the ralphs in pasadena for our field trip. 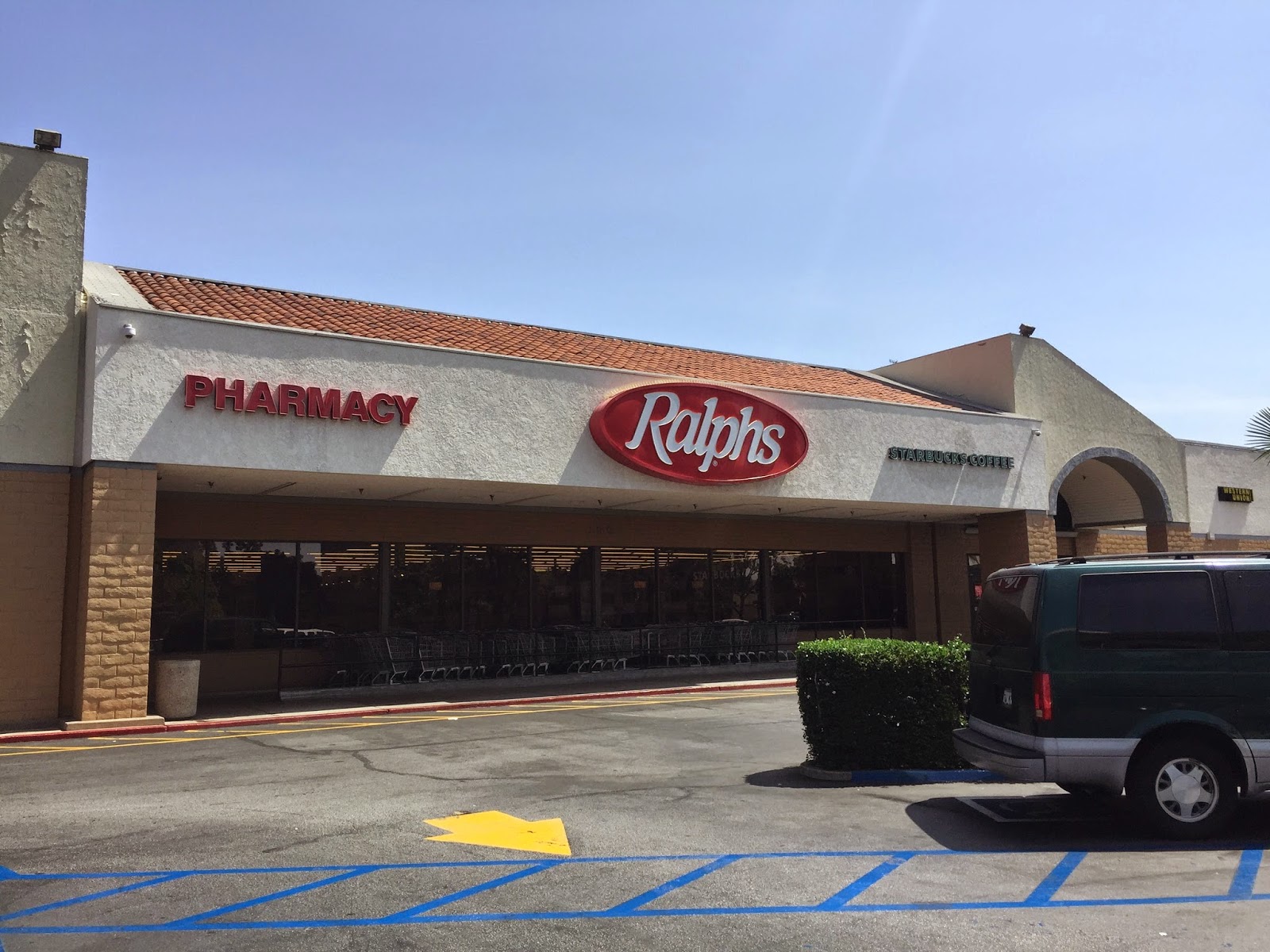 i'd called earlier in the week to confirm our outing with the contact person listed on the website.  she seemed a bit less than enthusiastic about the whole thing, but assured me that we were good to go.  except that when i went inside the store to check in with her, i was met with blank stares by both of the store managers.  apparently, she was off for the day...and hadn't told a soul about the group of ten daisy scouts who were coming in from 20 miles away for a tour.  i was rather put off by the way the two managers seemed to be trying to pawn us off on each other, with neither one being particularly welcoming about the whole thing.  i mean, i get it - this was totally sprung on them out of the blue, left in their laps by a colleague who managed to duck out of it completely.  but damn, put a professional face on and don't make me feel like shit about it.  it was an uncomfortable, awkward situation and i left them to deal with it while i went back out to confer with my co-leaders and see if the rest of the girls had arrived.

fifteen minutes later, they were finally ready to go.  the manager had tasked one of his employees to put together some goody bags for the girls, which they handed out before starting the tour. 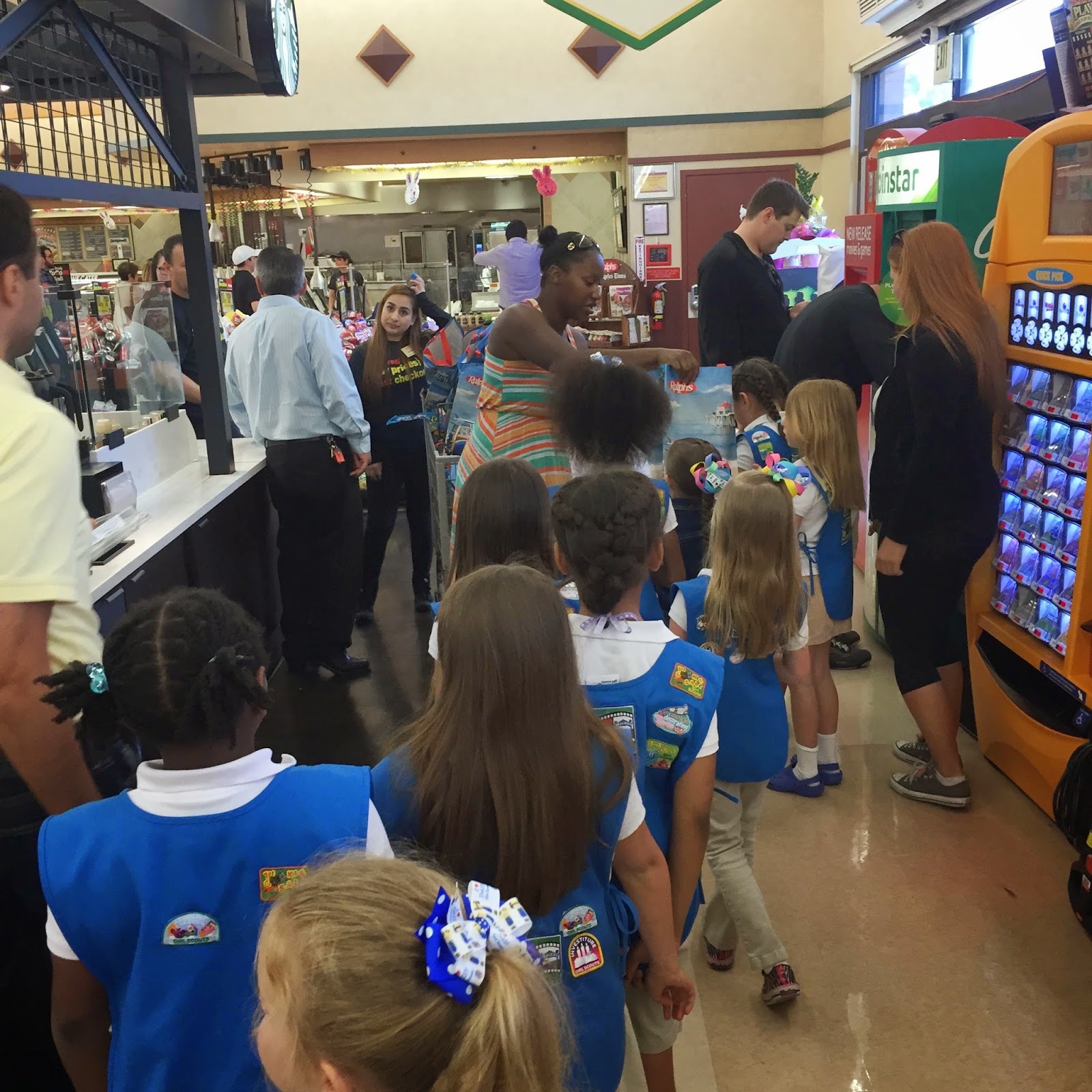 our first stop was the bakery, where the girls learned a little about how that department works and how they contribute to the store's recycling: 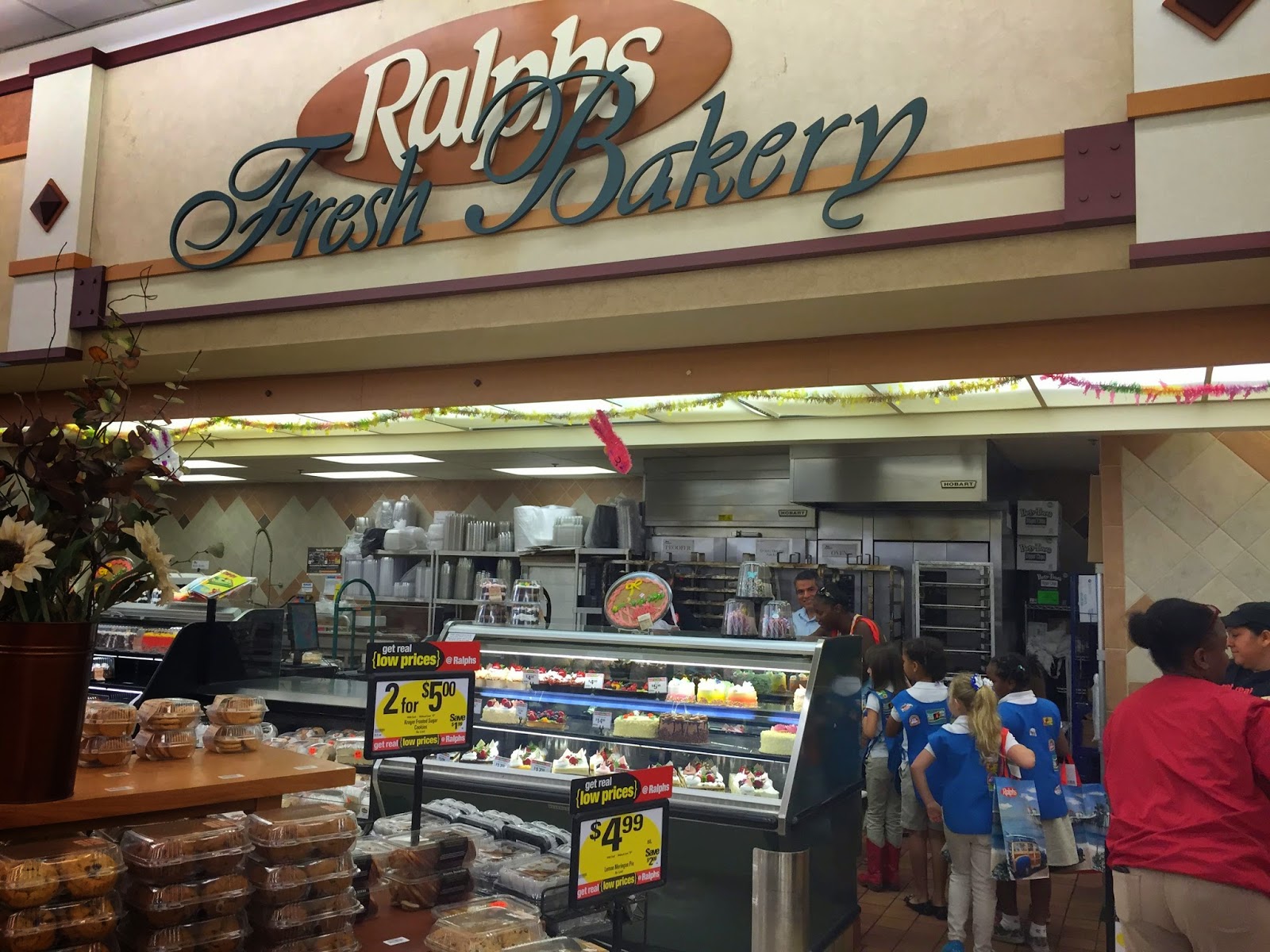 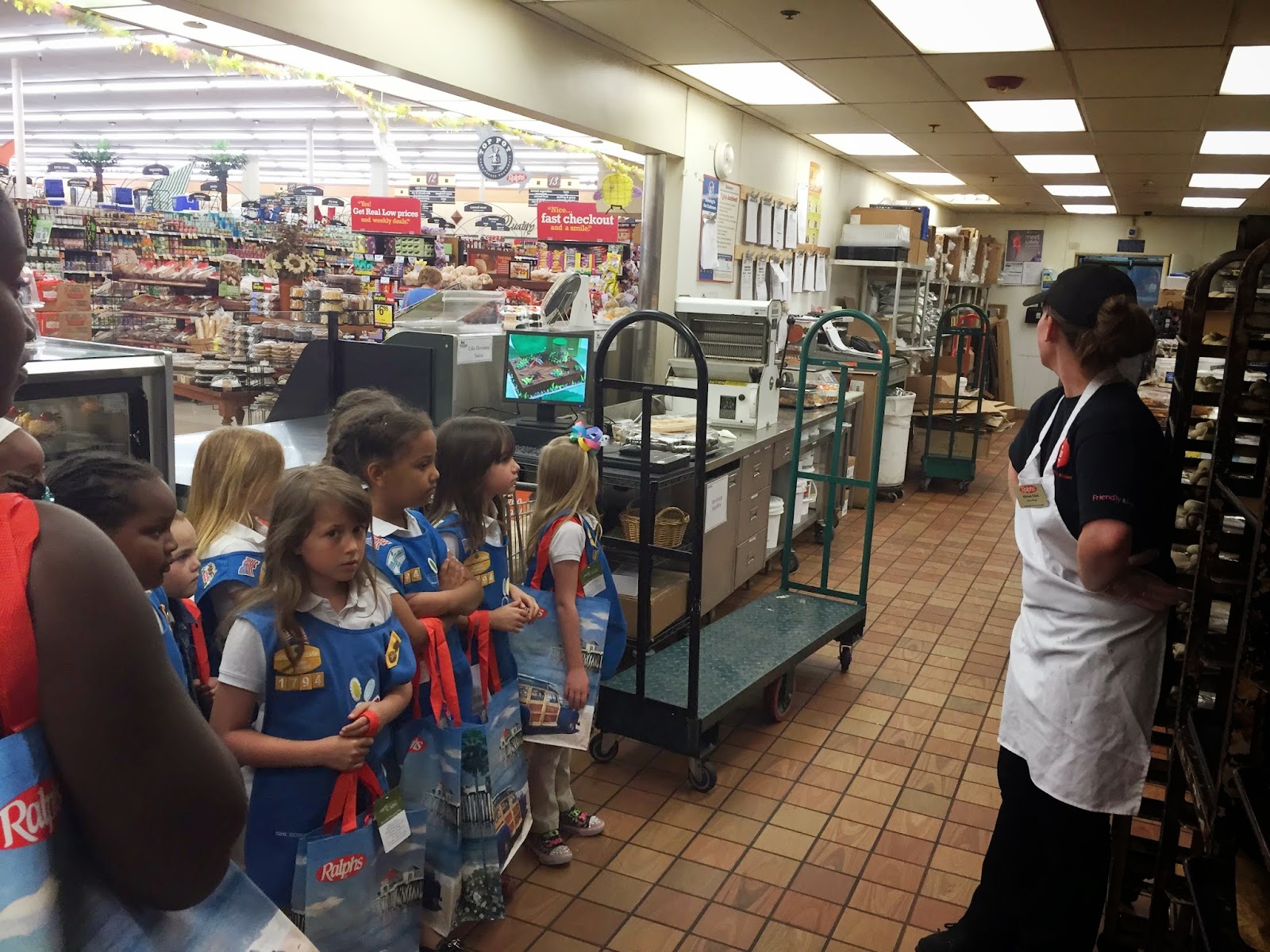 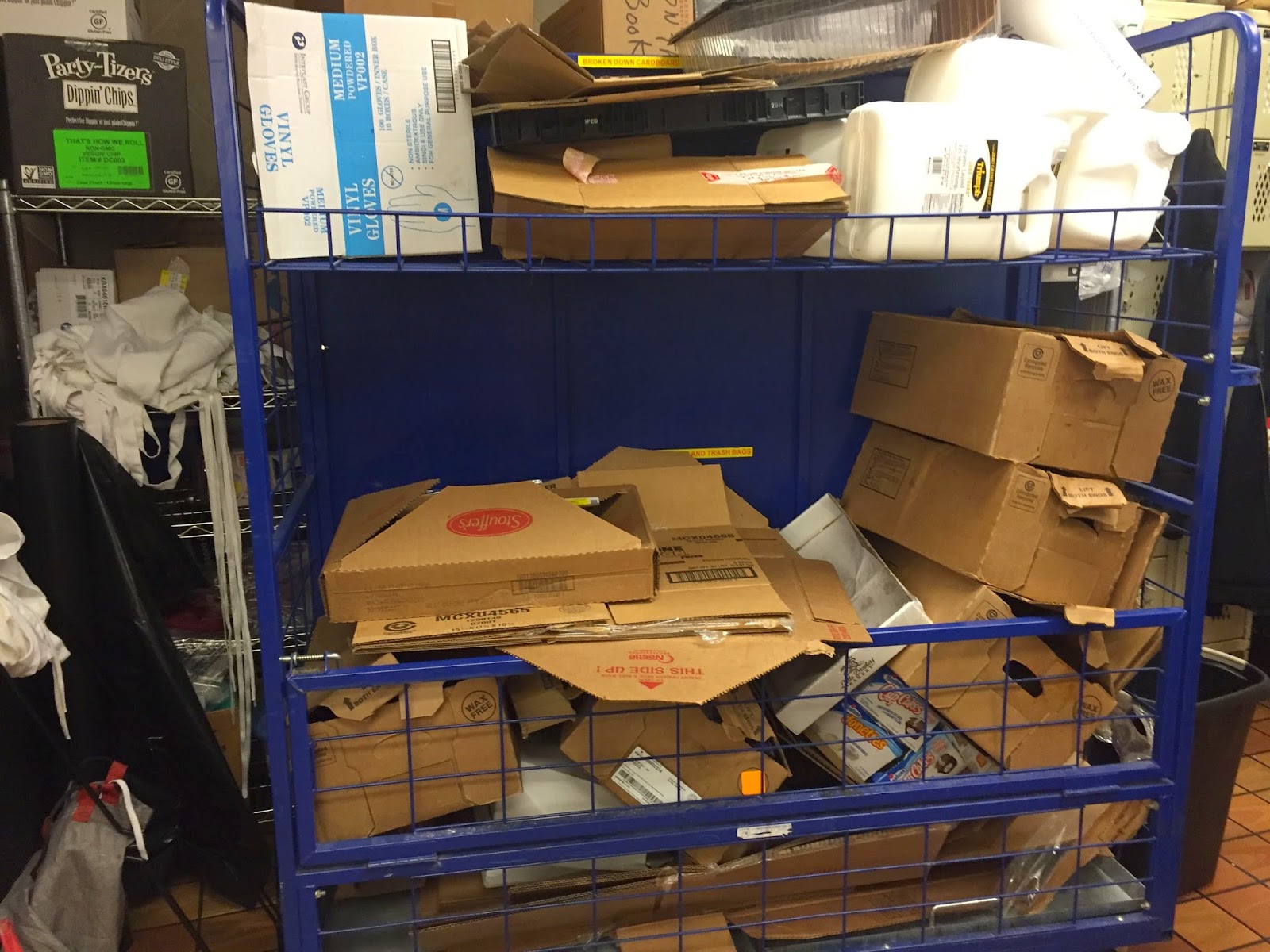 they were joined by a member of the hot foods department staff, who offered around some freshly cooked chicken tenders.  he told them all about how they pack up all of the unsold food at the end of the day and send it off to a local company that takes it and makes compost with it. 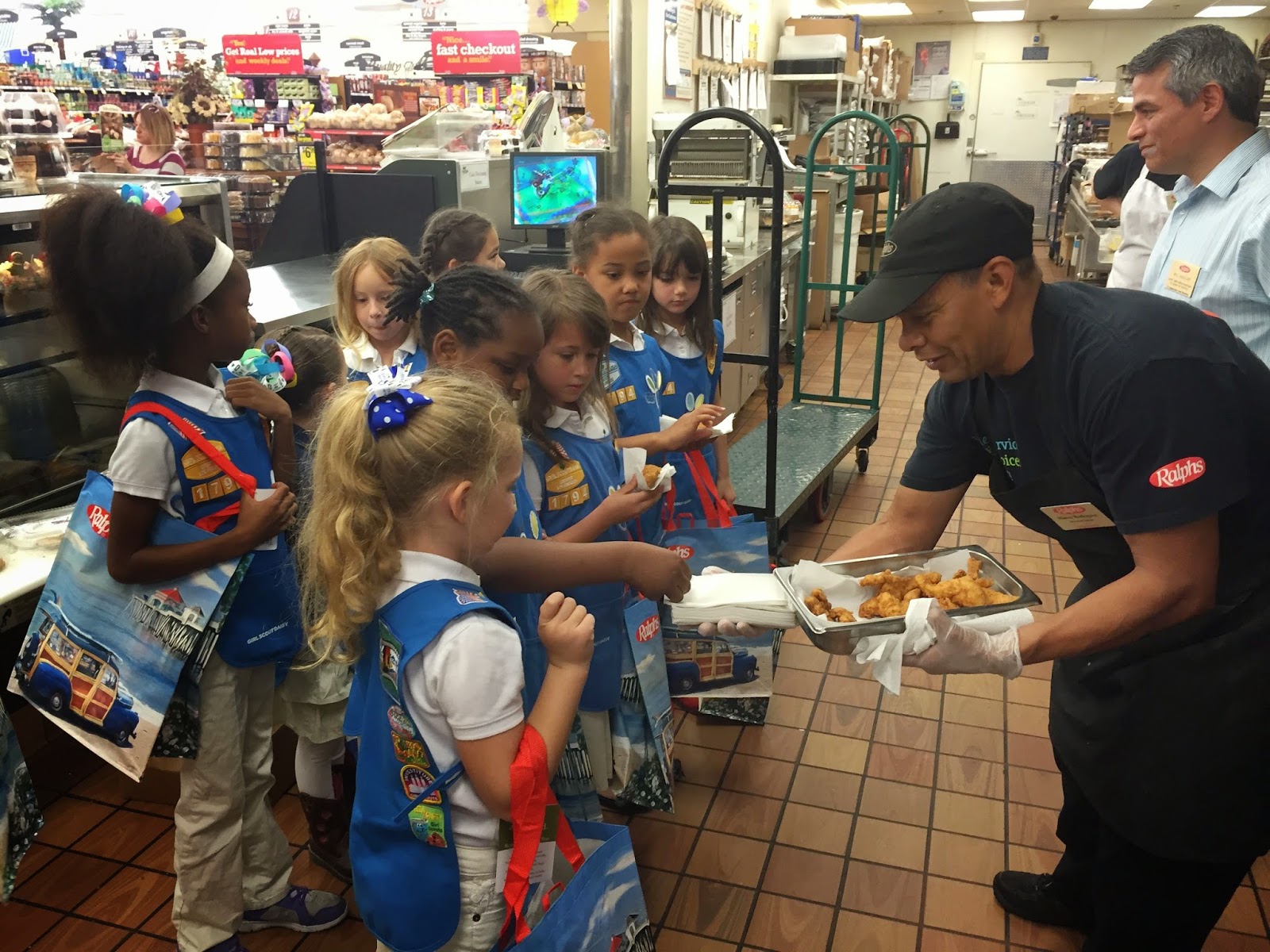 that chicken was really good, by the way.  it was seasoned nicely, cooked perfectly, and since i hadn't had anything to eat i was grateful for something tasty to put in my belly.

before heading off to the next department, the girls happily accepted brightly decorated sugar cookies. 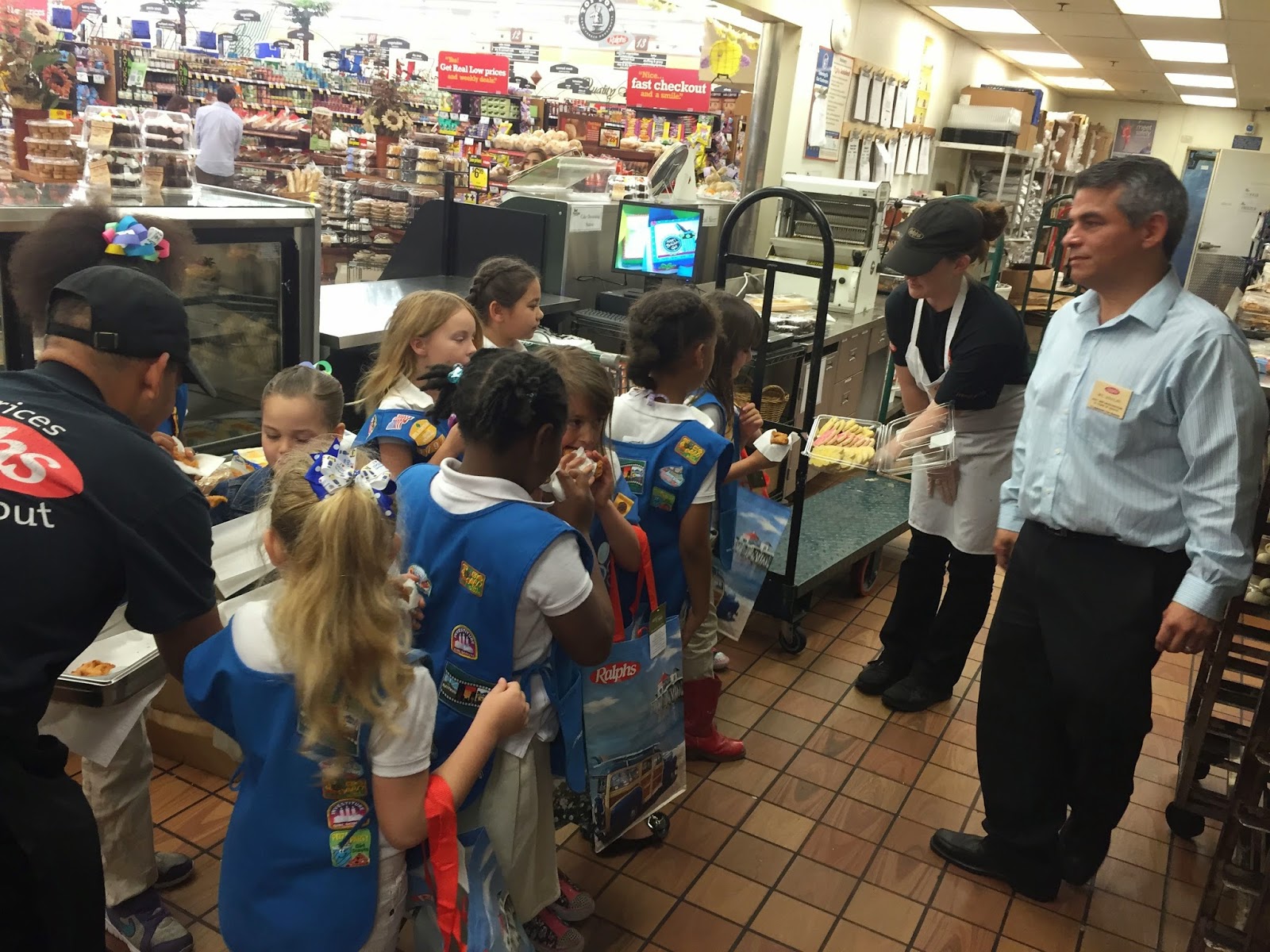 next up - meat and seafood. 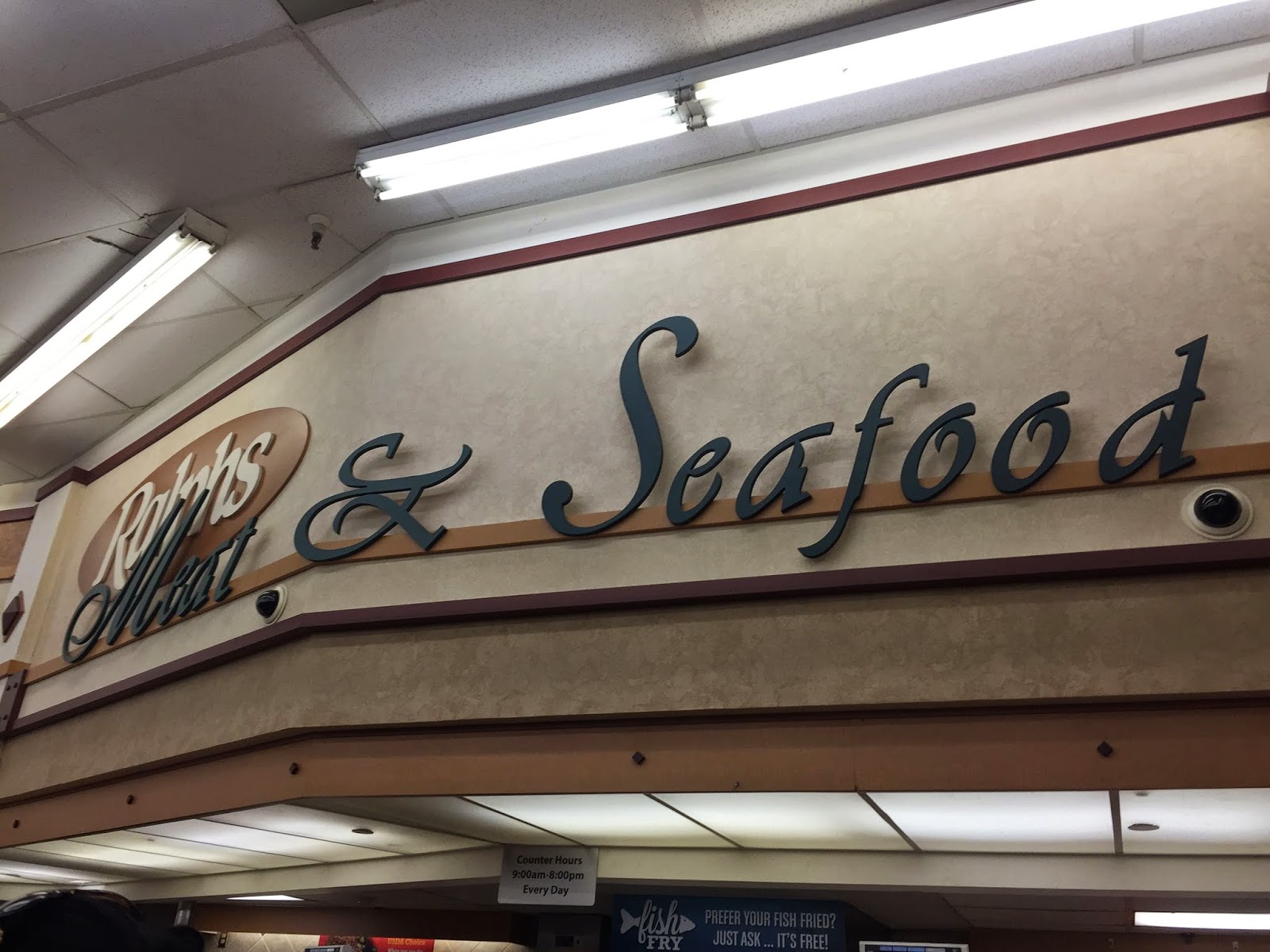 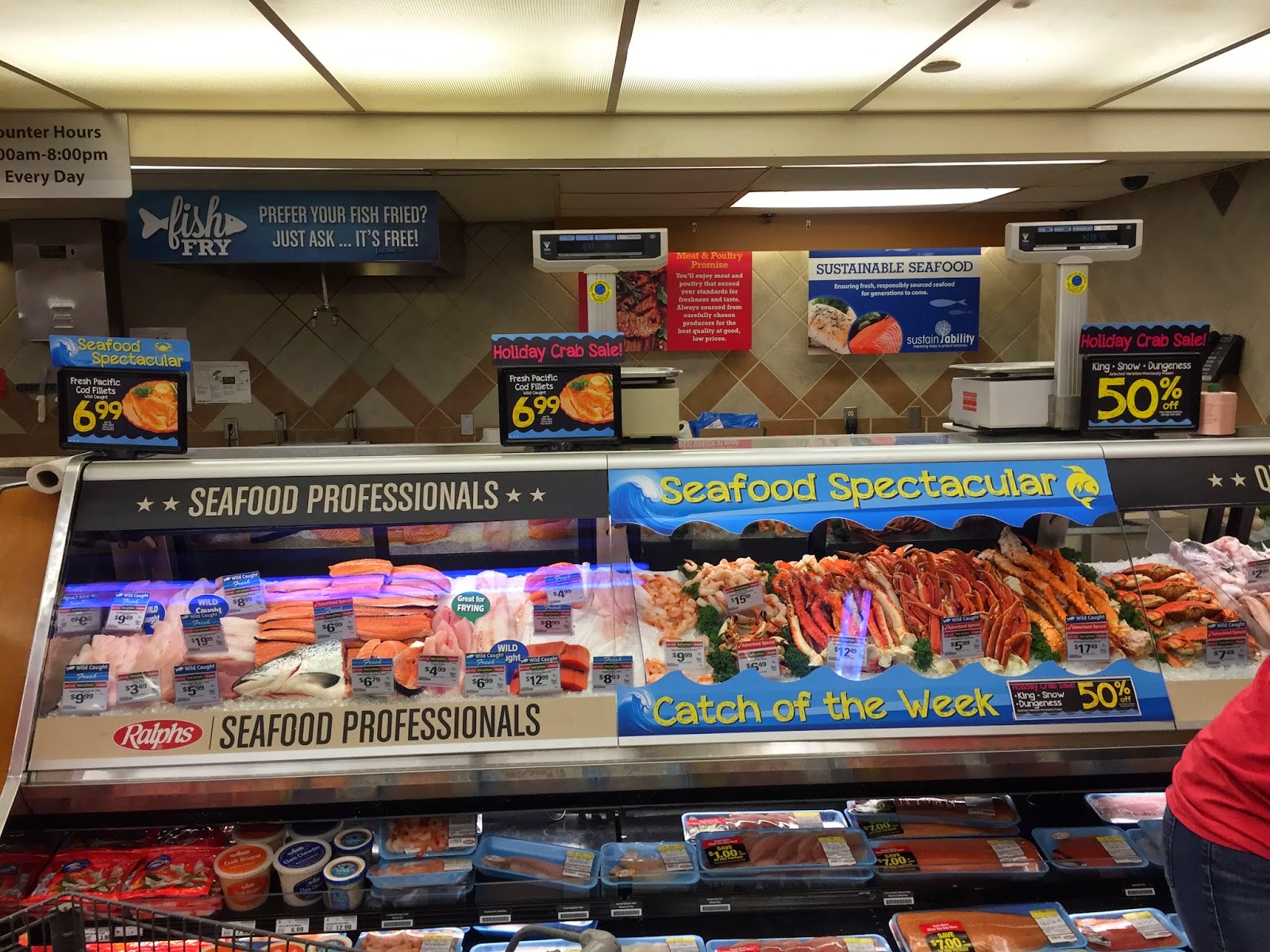 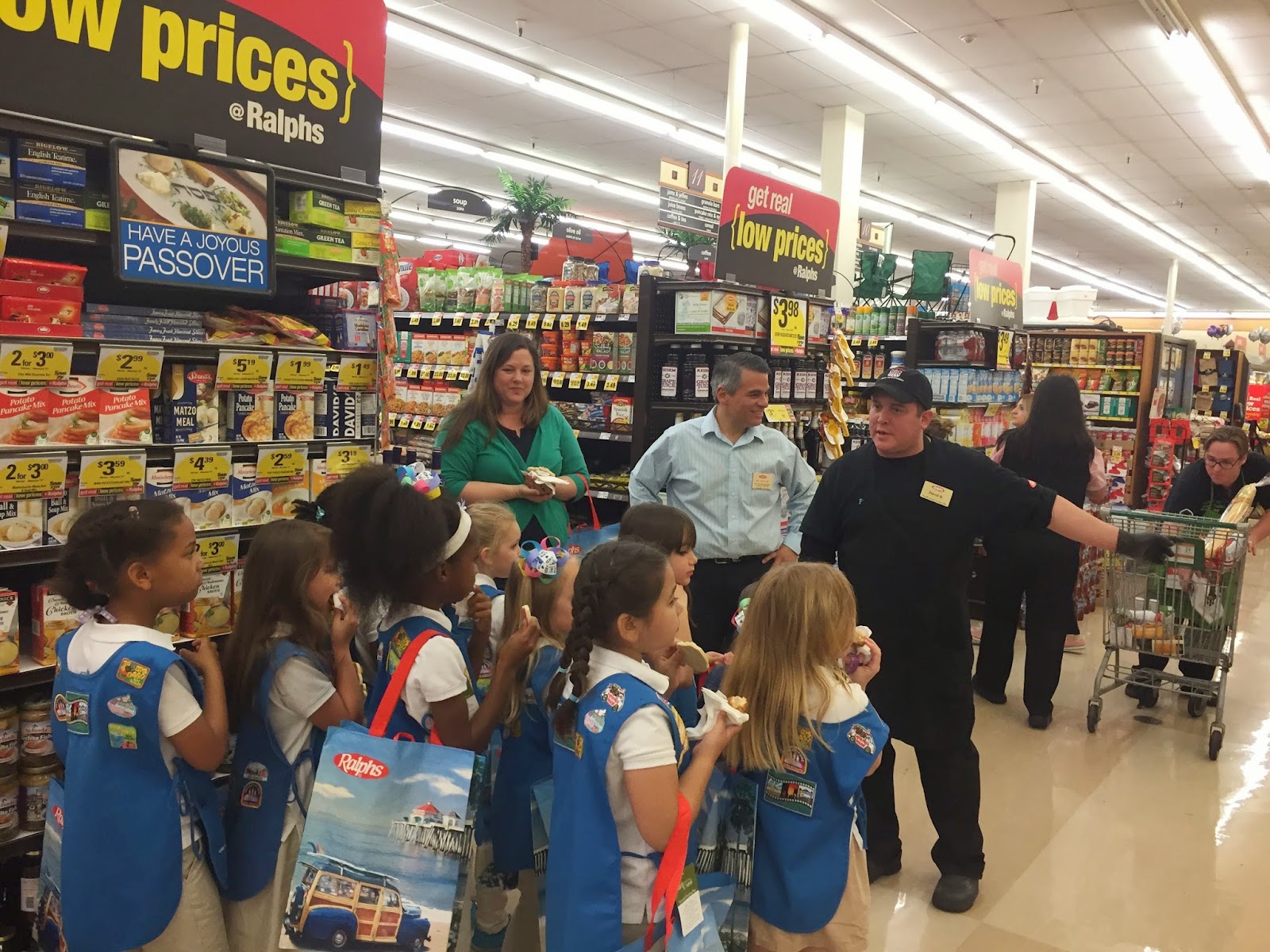 they learned a bit about where the meat and fish come from and asked a few questions, and then it was time to move on to the dairy section.  here they learned that when milk and yogurt and things go past their expiration dates, the products are thrown out and the containers sent off to be recycled. 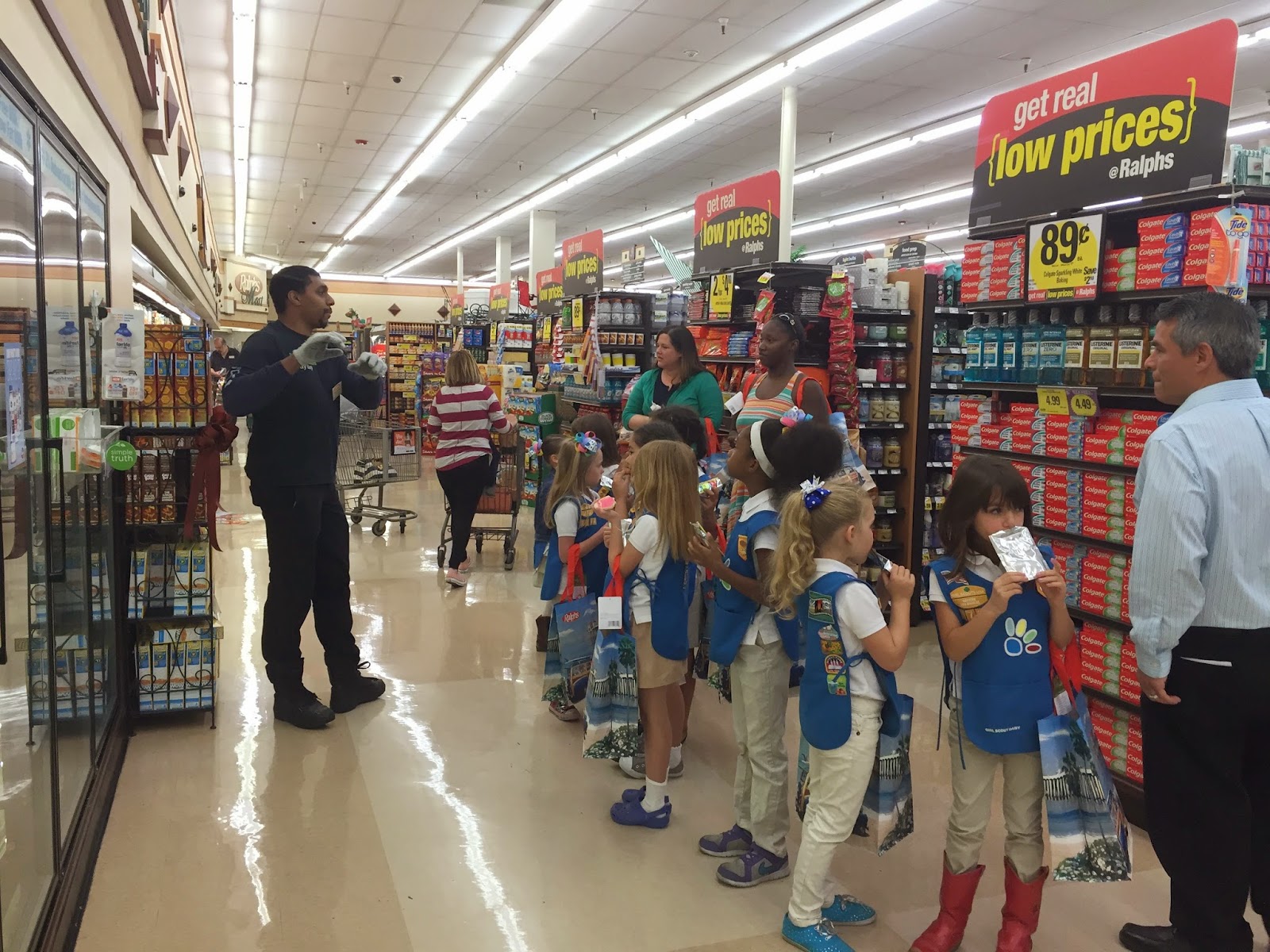 along with some capri sun juice pouches, they were treated to either tubes of gogurt or these drinkable yogurt smoothies: 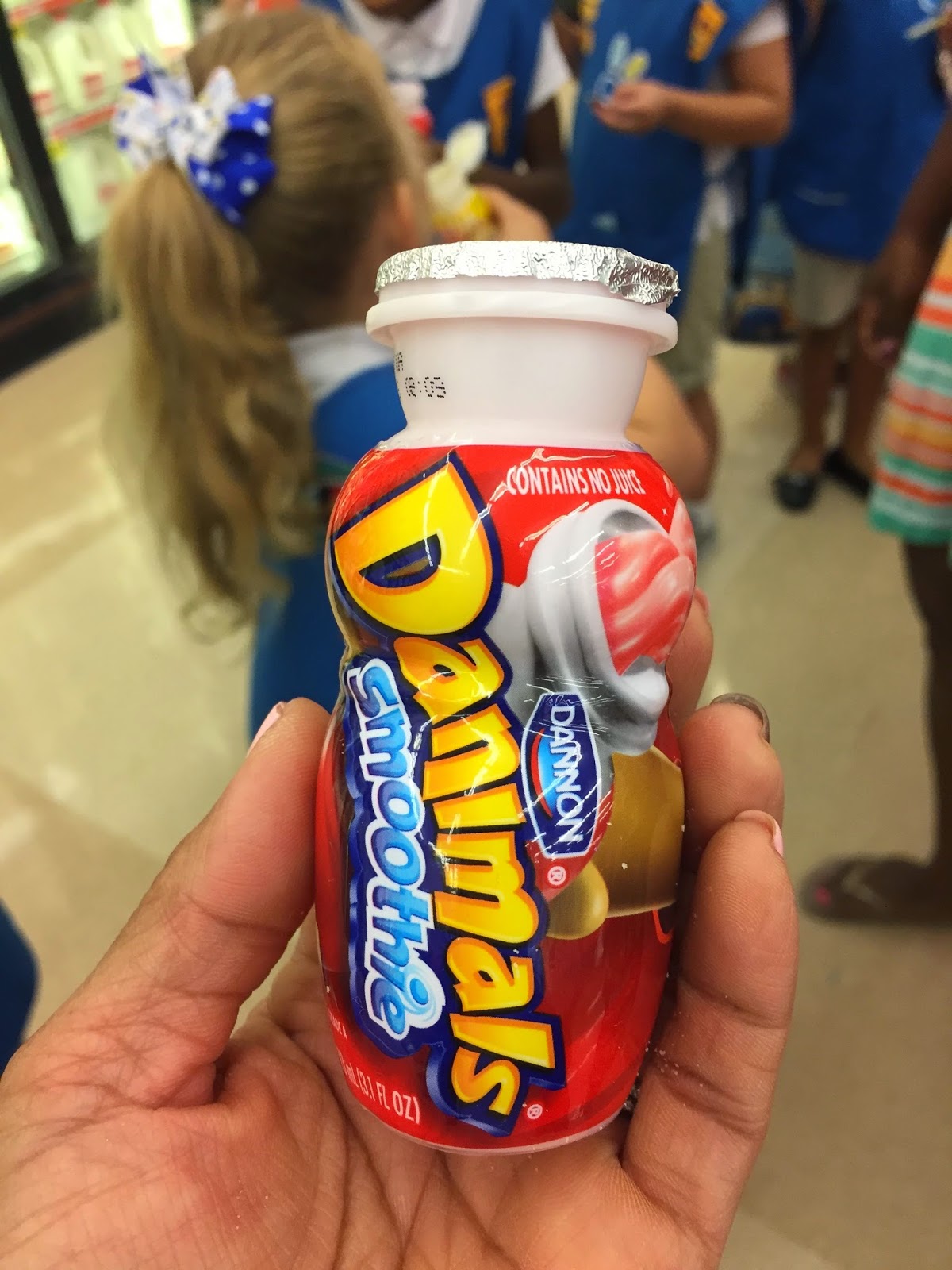 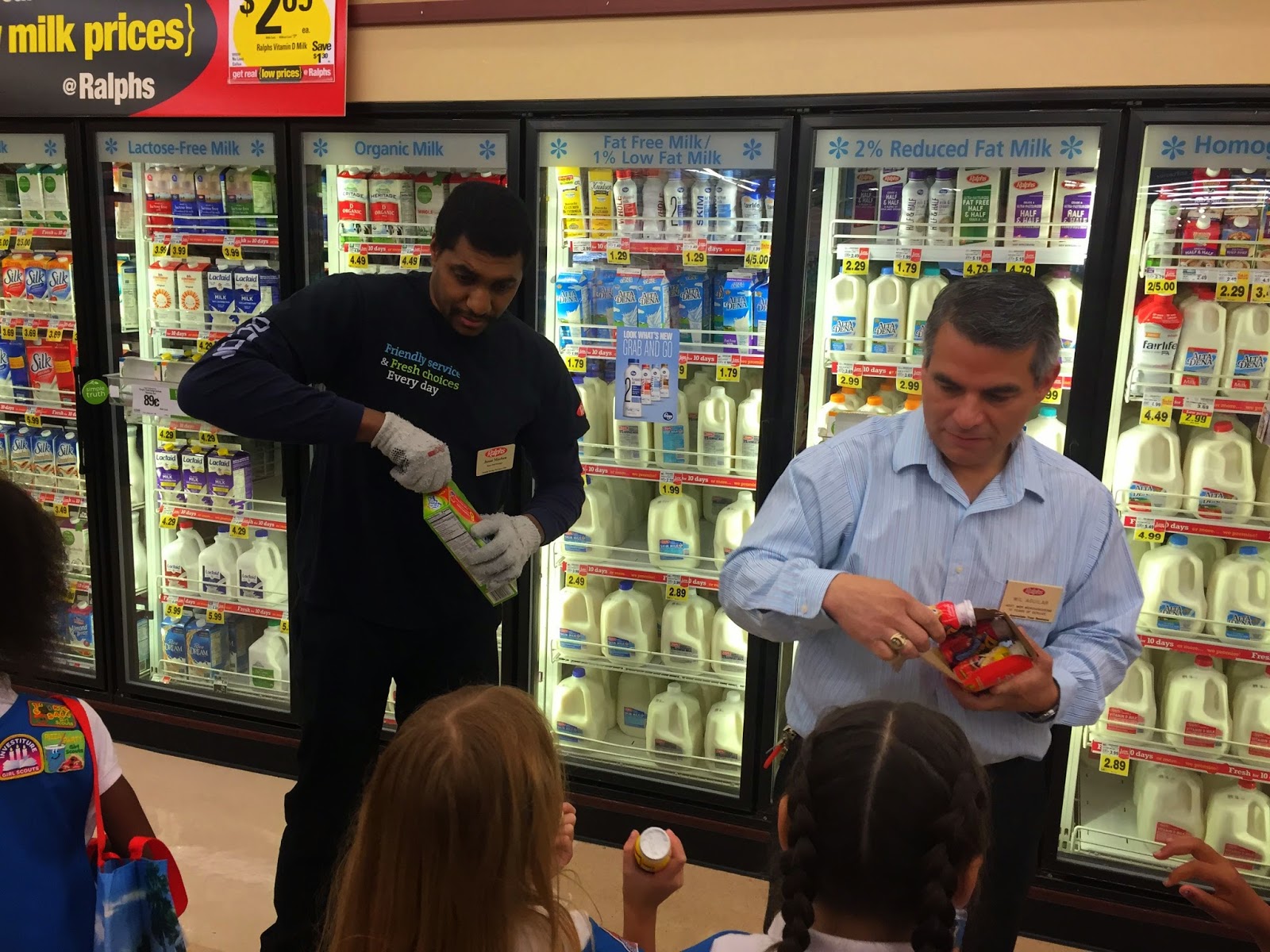 as they snacked on their latest samples, they followed the manager into the receiving department off to the side.  here they got a peek at how they unload pallets of products from the delivery trucks, learned about how they treat hazardous materials, and saw how they stack the cardboard boxes and empty pallets for recycling. 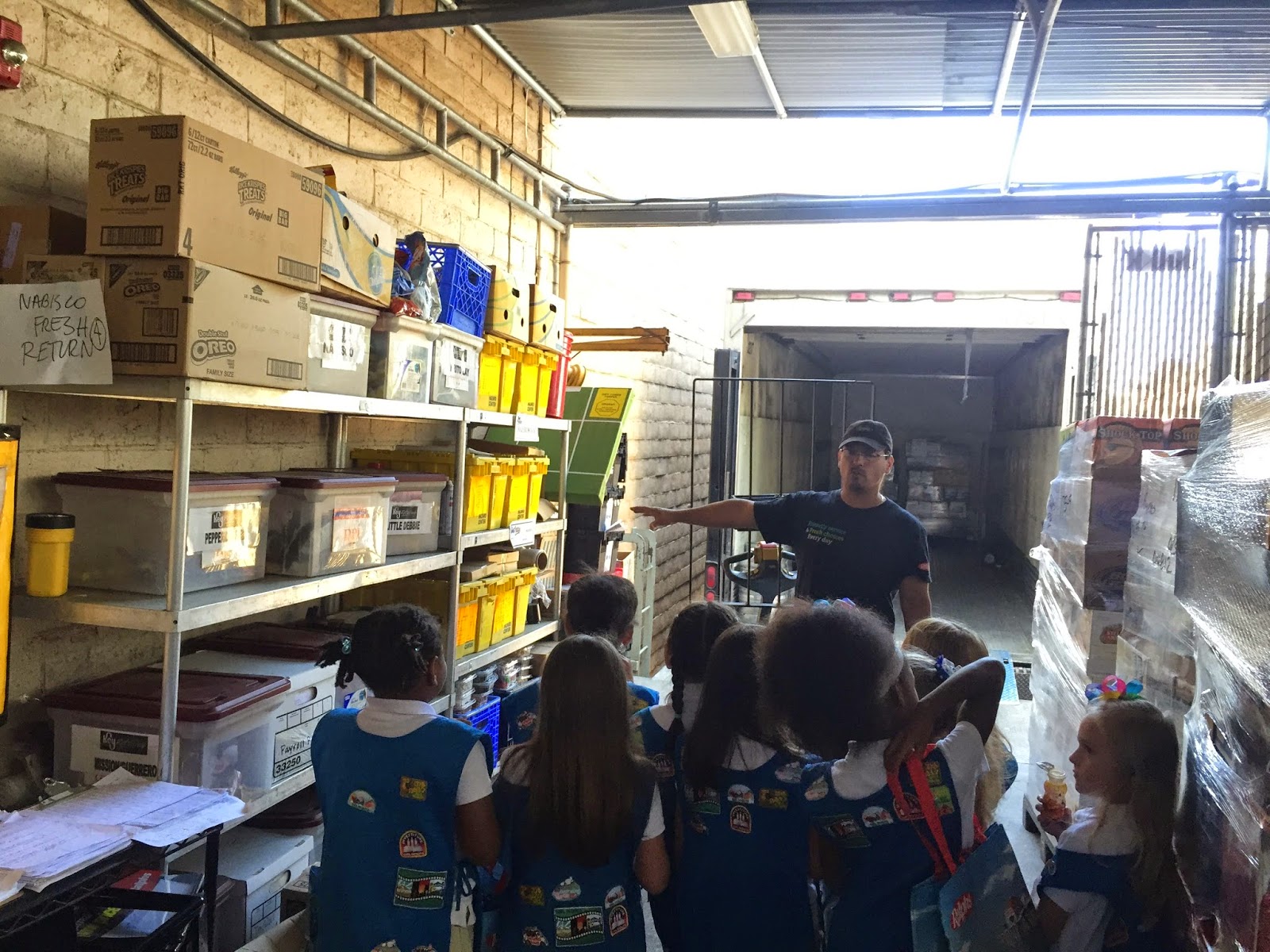 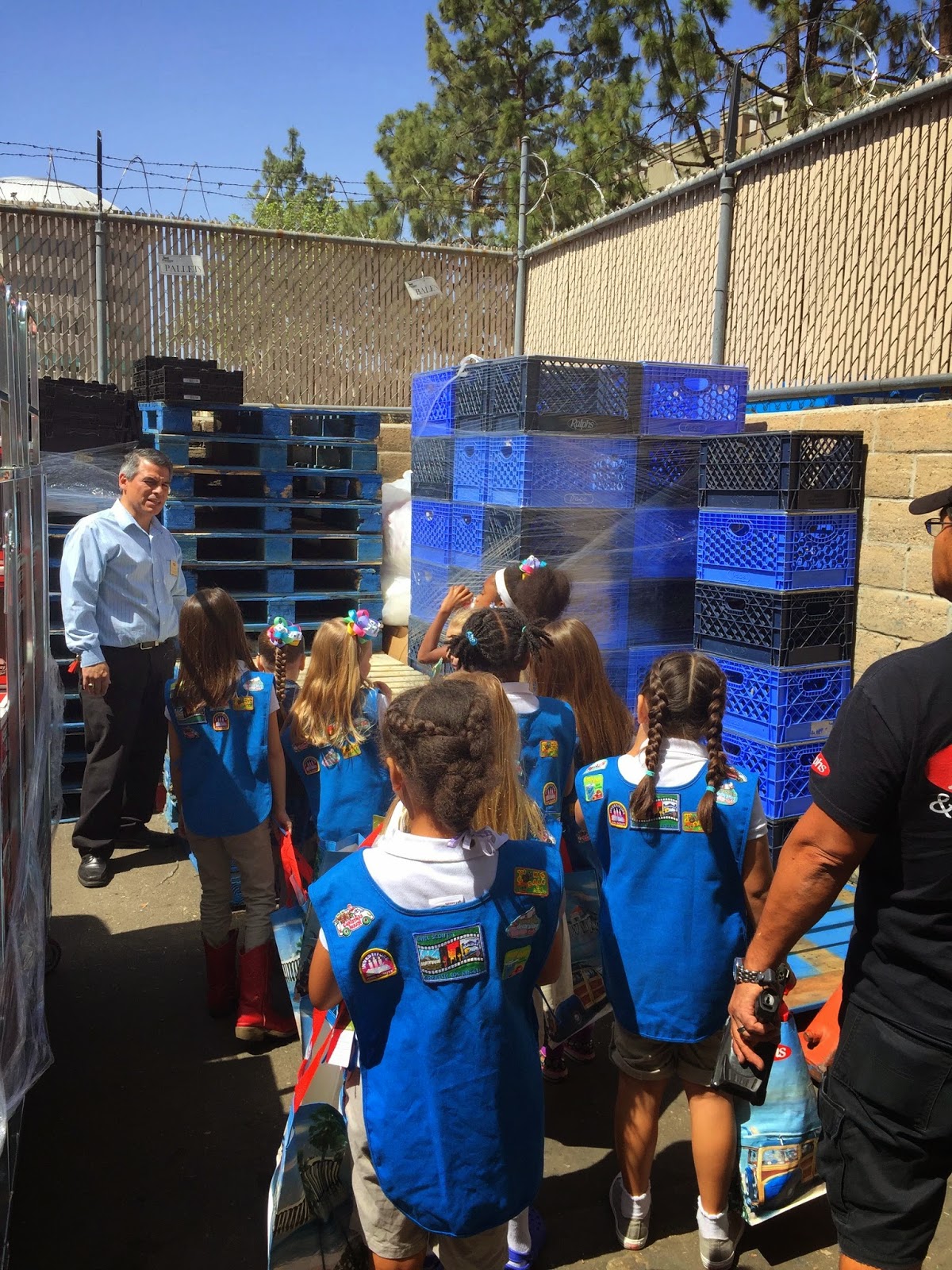 while we were back there, a member of the meat/seafood department staff came bearing gifts - a plate of fried chunks of tilapia.  the bean, having recently taken quite a liking to fish (yay!), was happy to take one and see how she liked it. 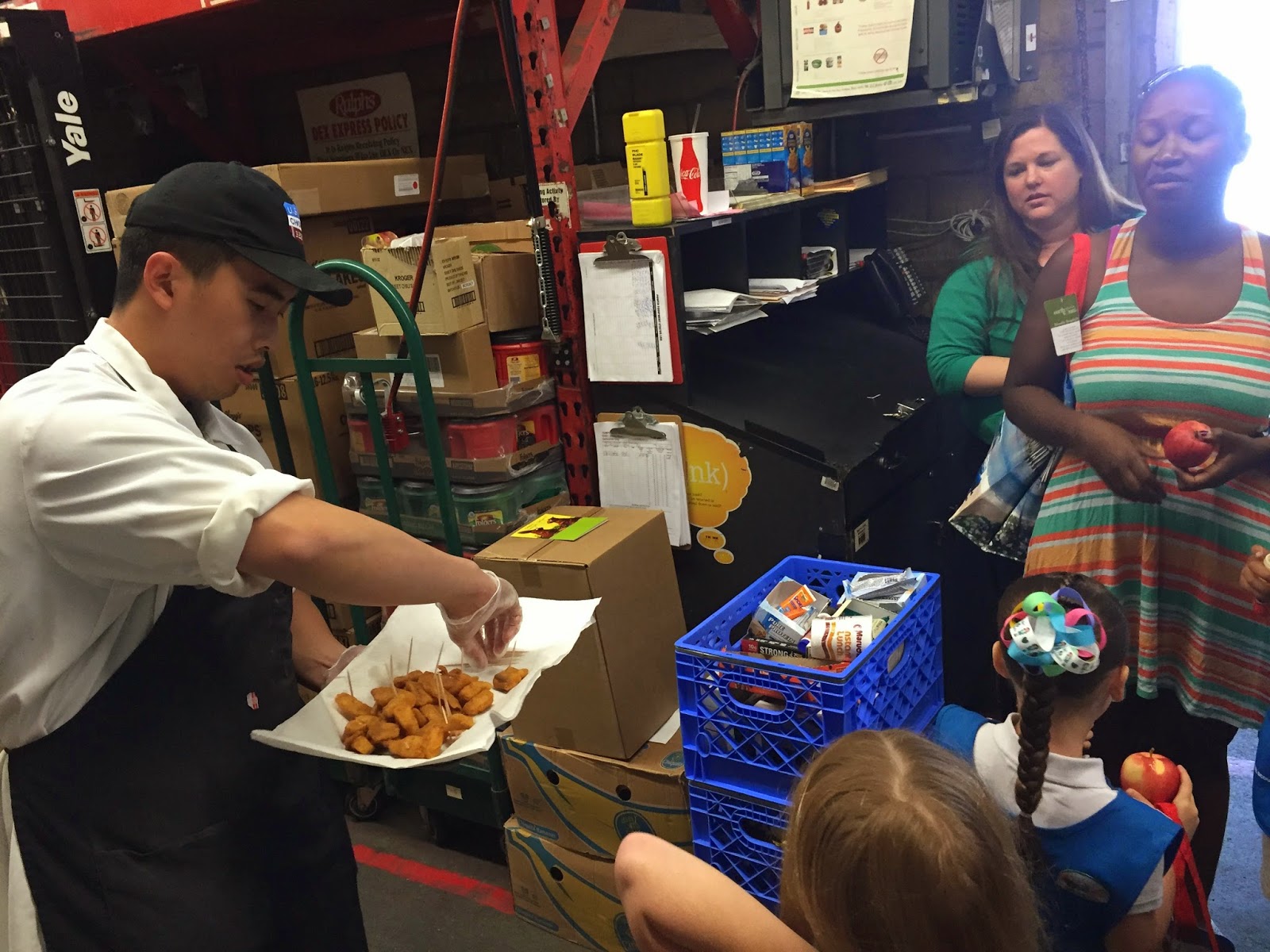 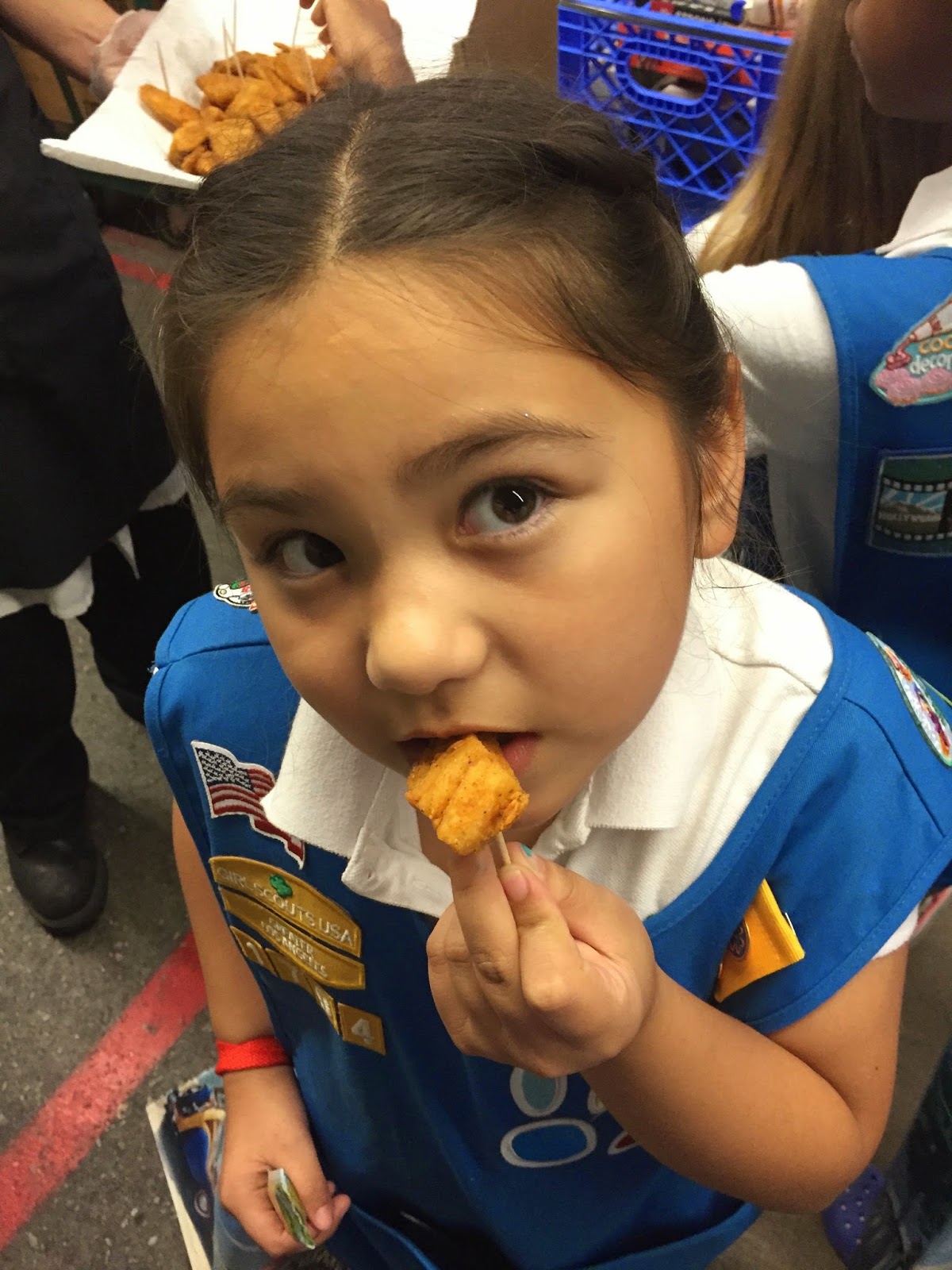 since my tummy was still growling after it'd been teased with that chicken earlier, i was more than happy to sample a piece myself.  and like the chicken, it was fresh from the fryer, nicely seasoned, and perfectly cooked.

they were met by someone from the produce department, who also came bearing gifts.  apples all around! 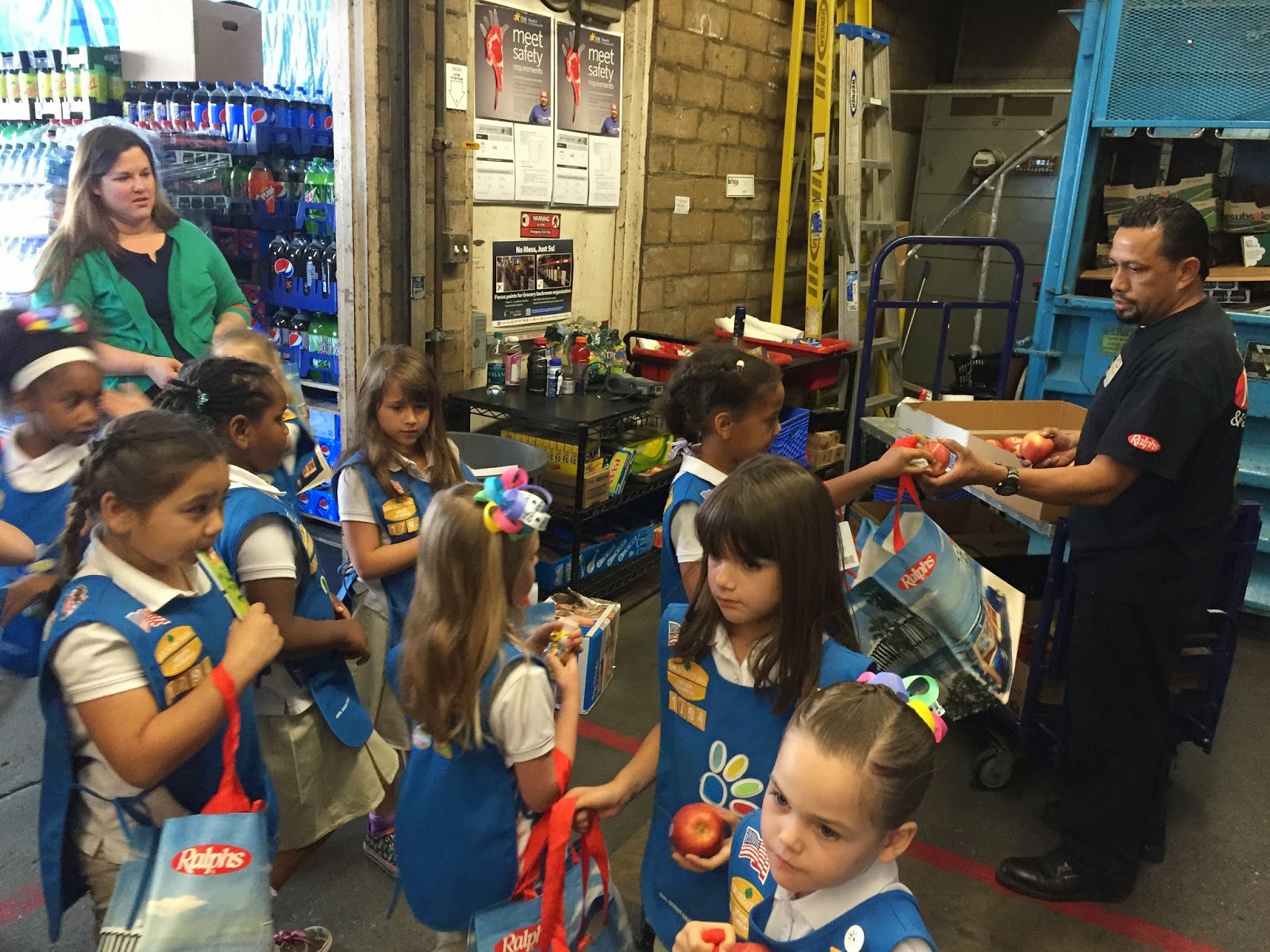 we roped in the manager who'd led us around the store on our tour for a group photo.  he seemed embarrassed as all hell as his staff members who were back there with us snickered in the background, but he smiled and posed with the girls anyway. 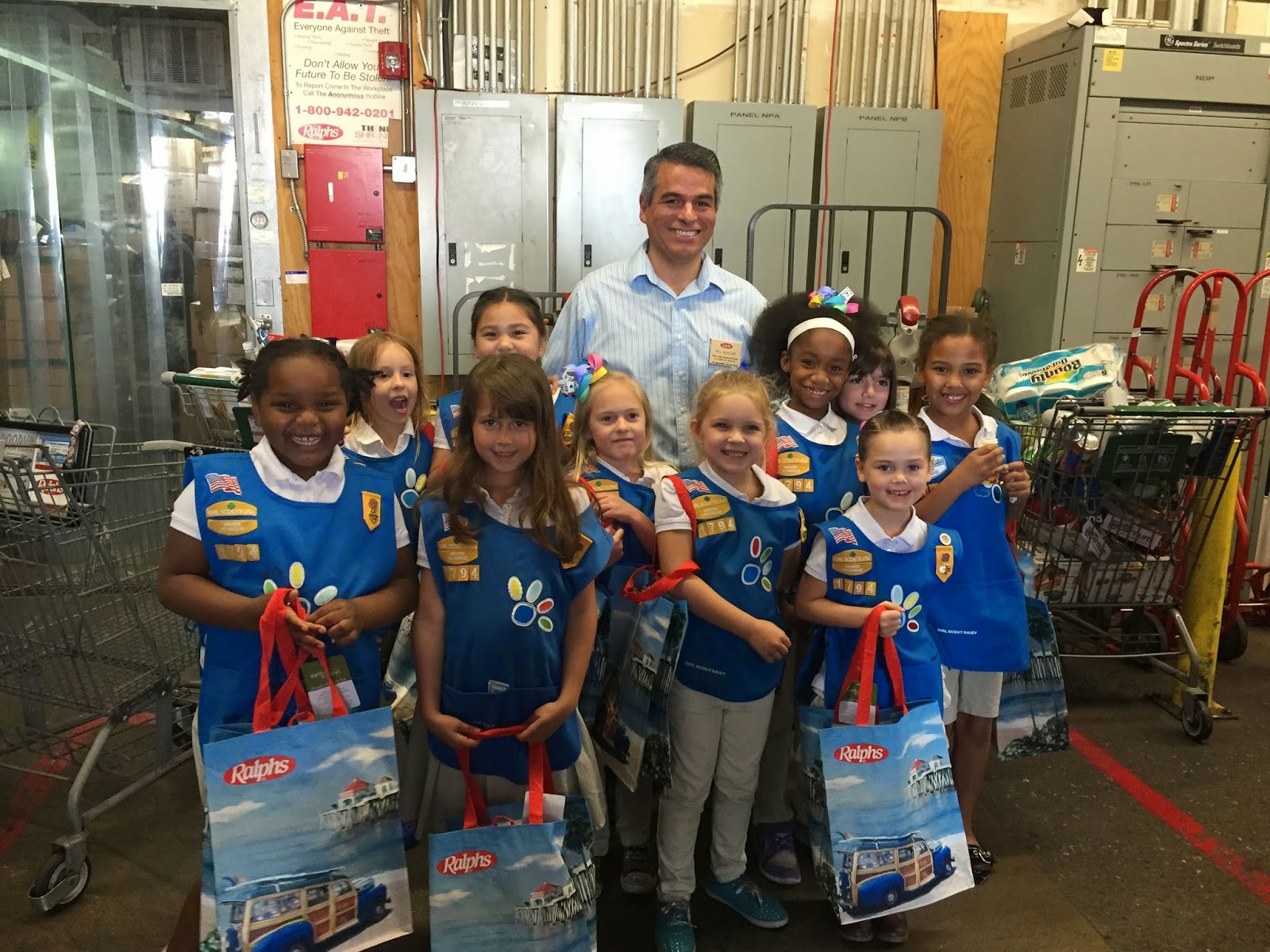 all in all, despite a rocky start, it turned out to be a pretty successful field trip.  he apologized for the mixup, which i appreciated, and it had been educational for everyone, scouts and leaders alike.  not to mention all of those free samples from every department. we'd learned and discussed and seen enough to earn our petals, so i'm considering it a win.  back outside, the girls dug into their goody bags and found all sorts of fun stuff - a red plastic sandwich container, various easter goodies, a plantable bookmark - tucked into reusable grocery bags that their parents seemed to appreciate when they picked them up. 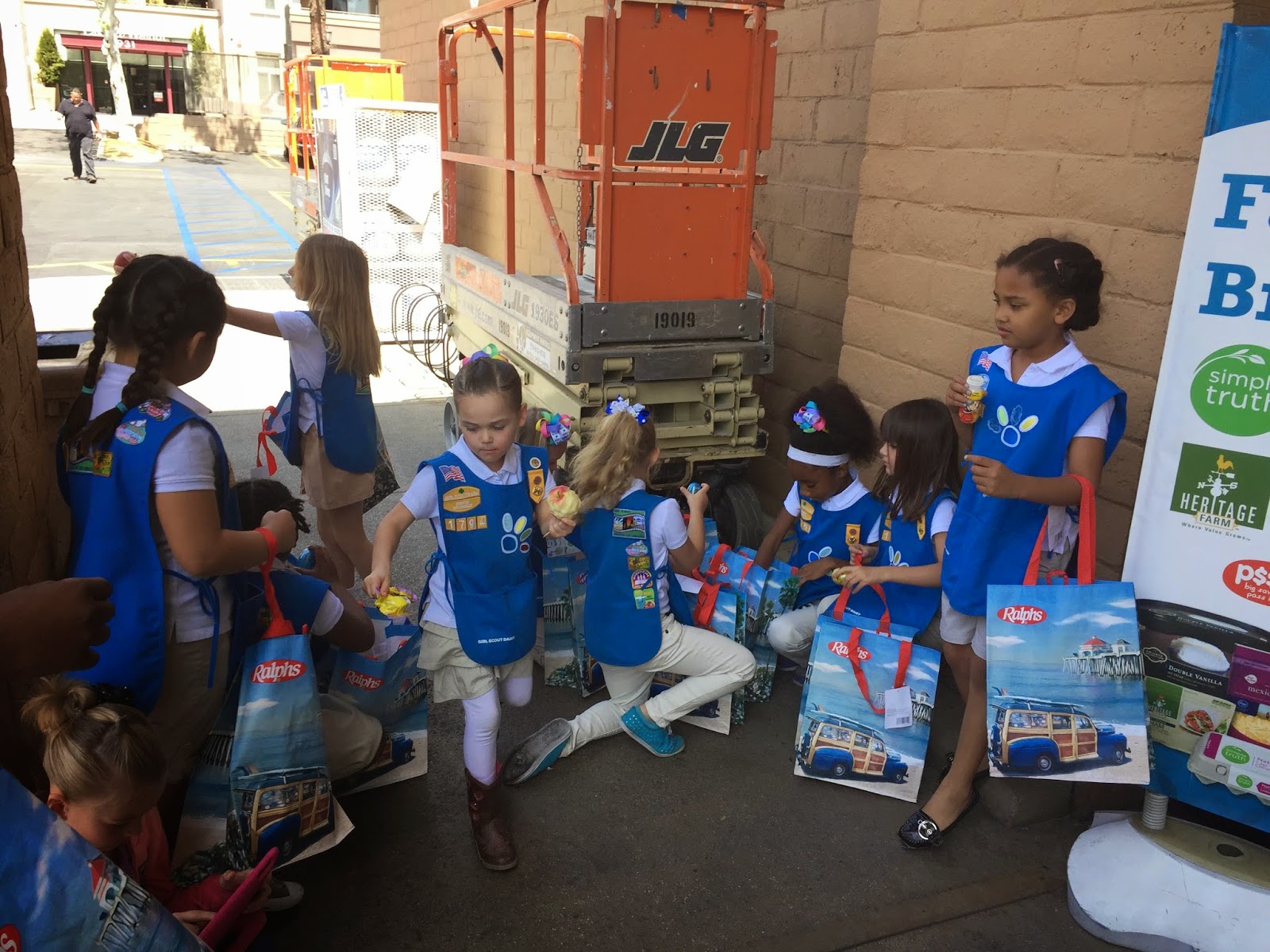 next up, another group outing to hollywood for their cookie sales reward.  13 girls and 11 adults - this is going to be interesting.  wish me luck.
at April 03, 2015