my co-leaders and i were really excited for the next guest speaker we'd invited to join us at our next meeting.  for their petals representing the parts of the girl scout law that say "be responsible for what i say and do" and "respect myself and others," an etiquette coach was coming to teach them a class in basic manners.  society in general has become so lax in this area, and maybe if we make a real effort in teaching our kids how to be polite and well-mannered, we can start to turn that back around.  hope springs eternal, right?

miss christina arrived, dressed beautifully in a yellow pant suit that was perfectly creased, and greeted the girls warmly before sitting down to start discussing the subject at hand.  being 7, the girls were a little squirmy in the beginning, but as they started to listen and interact with their guest, they calmed down and started to have fun. 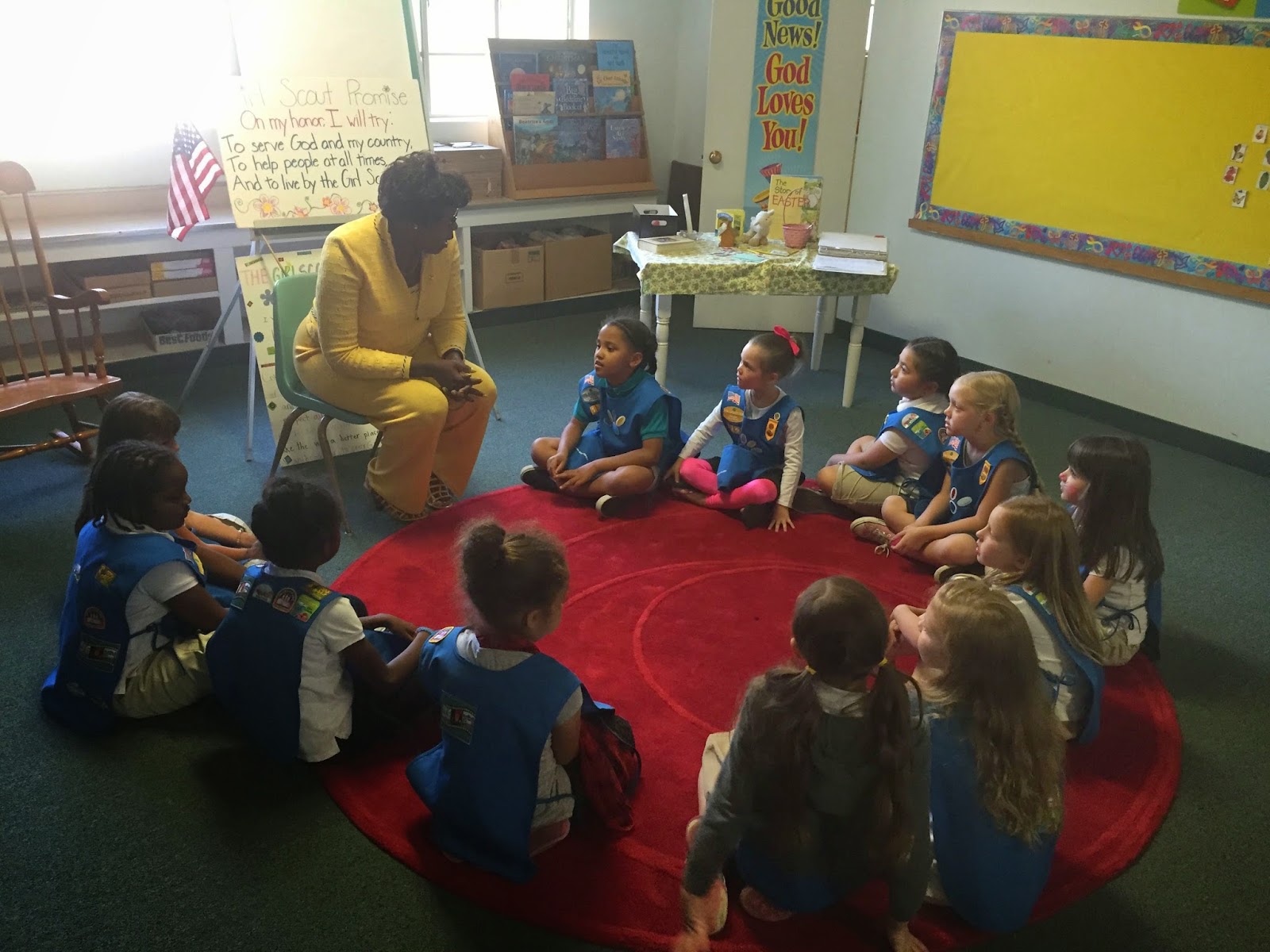 i took a peek at the table, where she'd laid out a disposable tablecloth adorned with a pretty lace pattern, plus a ton of pretty plates, cups, saucers, and flatware.  this was going to be so great: 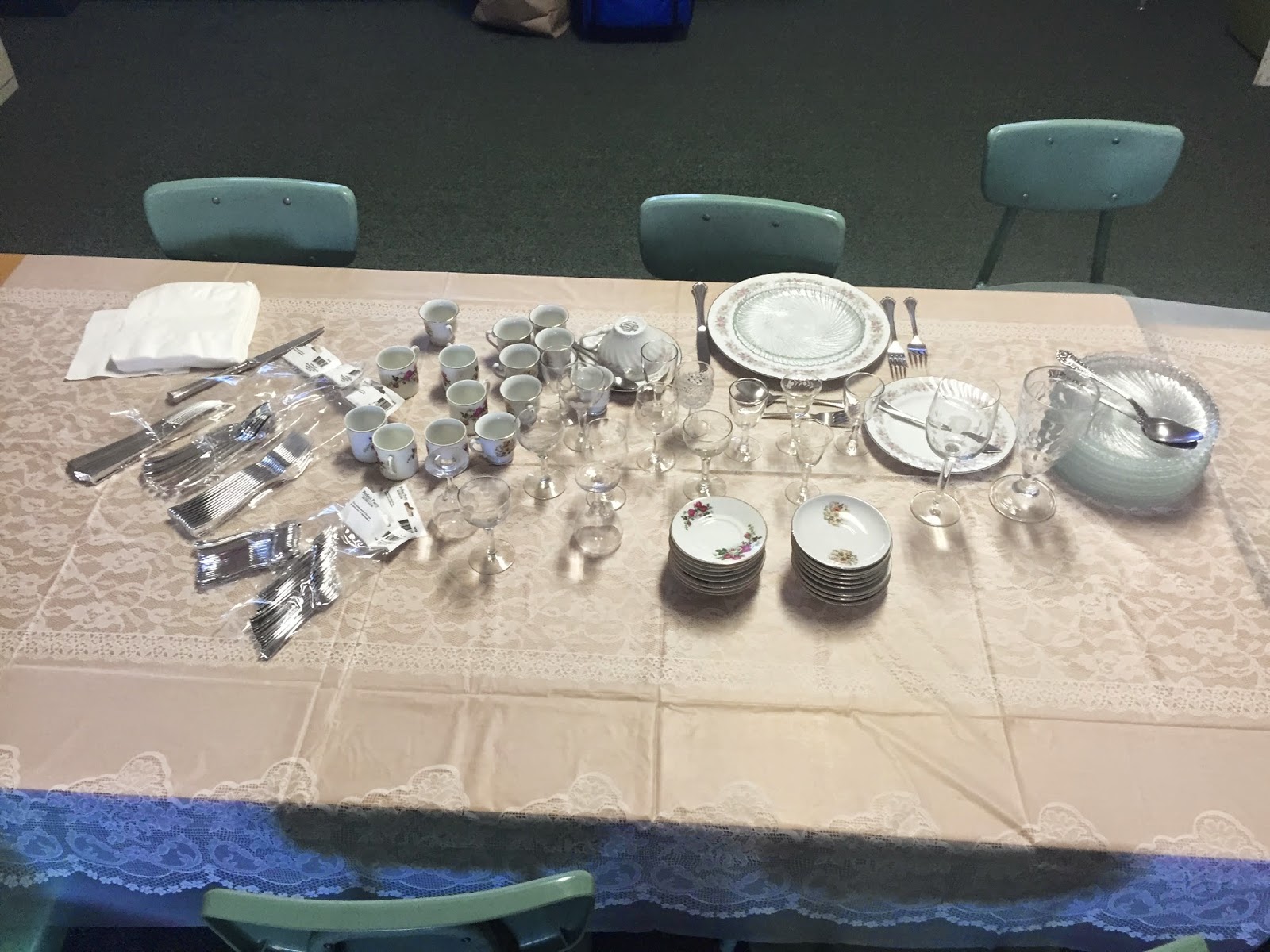 when the girls moved to the table, she explained in detail what all of the pieces were and where they were supposed to be placed at each table setting.  then the girls were seated and passed each other one of each item so that they could recreate the perfectly laid out setting that miss christina had placed as an example for them to follow. 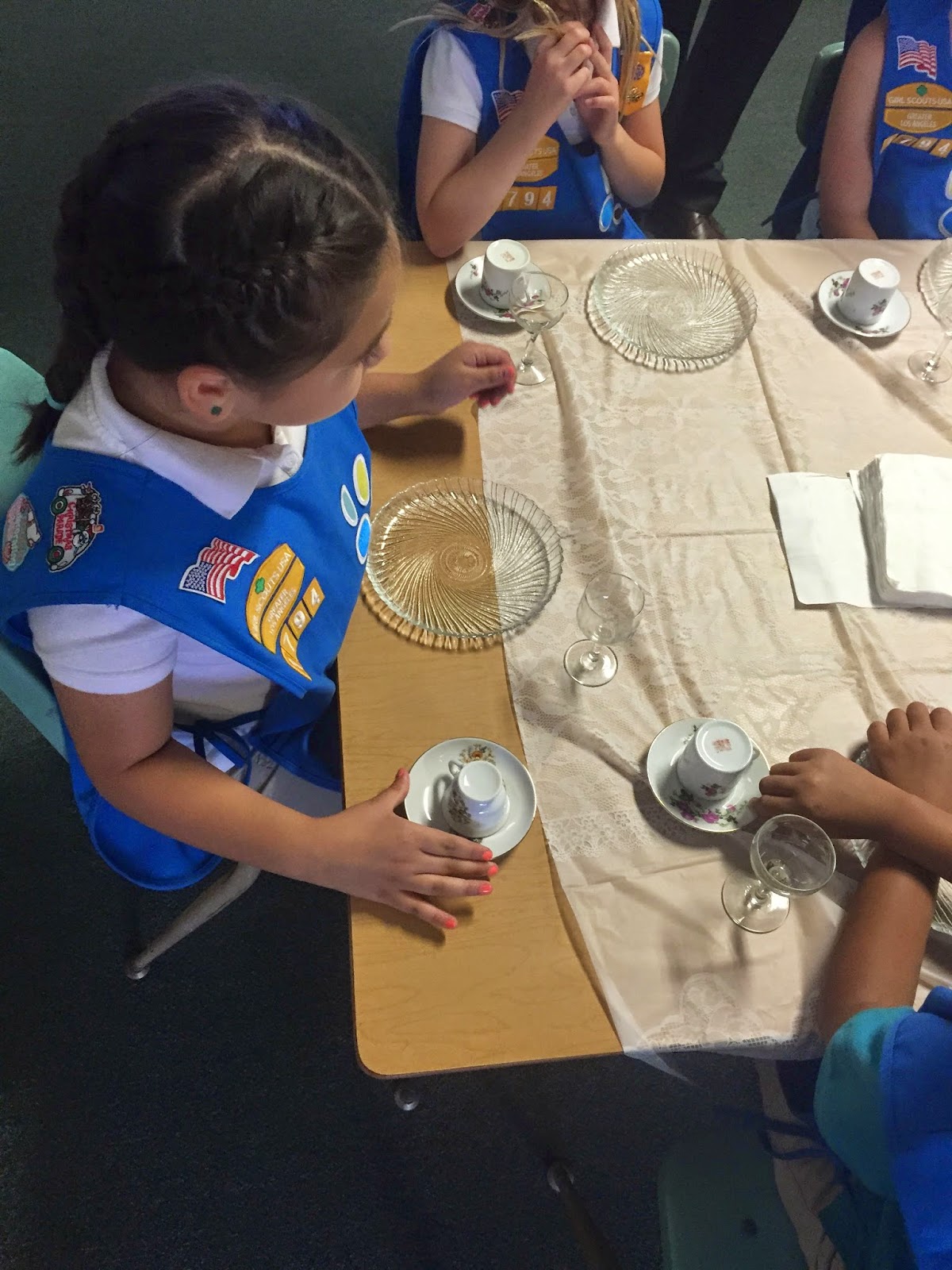 my co-leaders and i sat back in a corner, watching and listening.  as we listened to the explanation of what the various flatware pieces were for and how to figure out which one to use first, i said "you know where i learned that?  from 'titanic'!"  heheh.  funny but true.

it was funny to listen to them ask questions and giggle about things like wine glasses, salad plates and water cups.  these kids are so smart and clever, and it's so much fun to be a part of their lives even for just an hour or two at a time.  when it was time to learn how to use a knife and fork properly, they were served pieces of fresh fruit to practice on.  i wondered how the bean would handle this one, since she wanted so much to be a great student but likes chunks of fruit about as much as i do.  much to my surprise, after making perfect little cuts into her piece of cantaloupe, she ate it.  all of it. 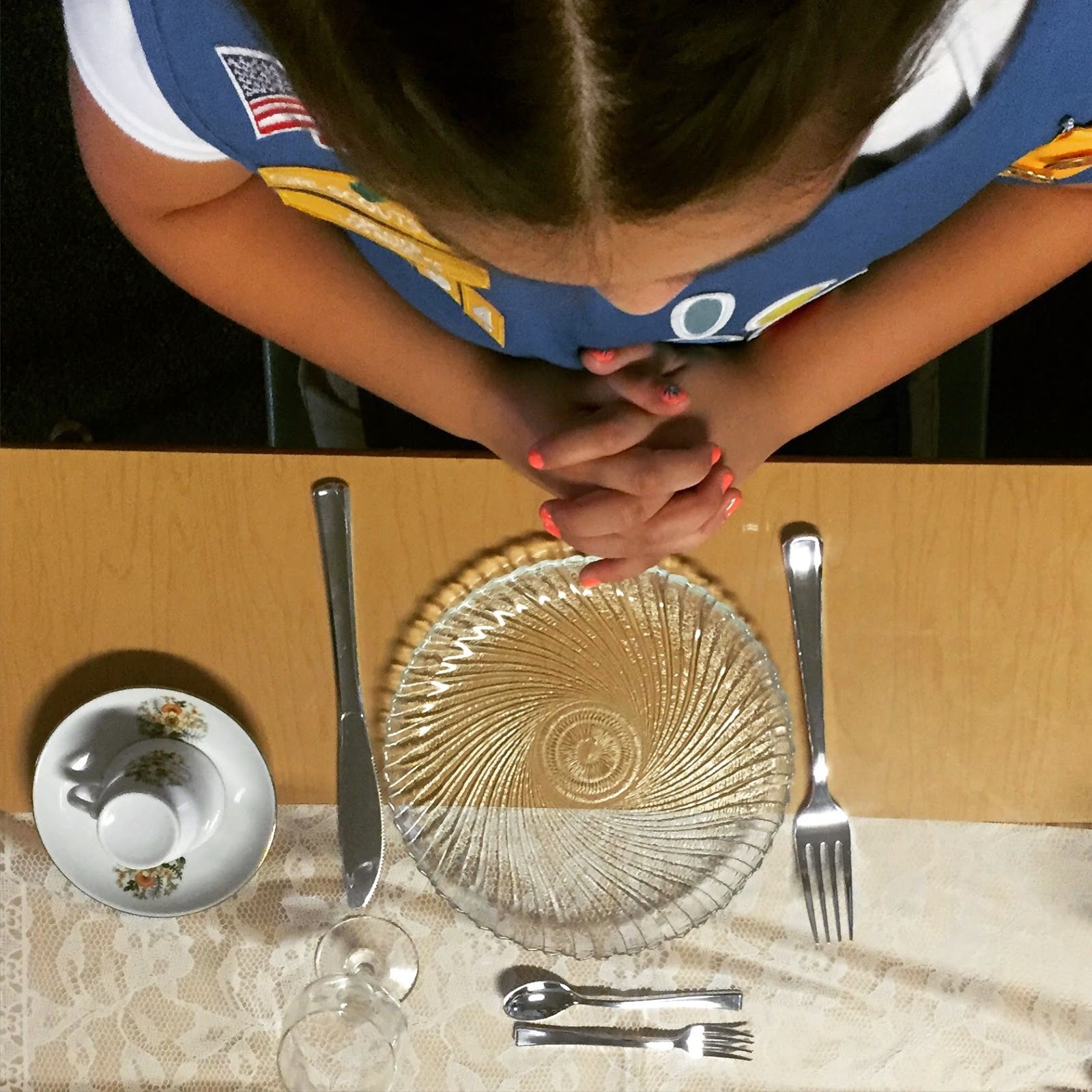 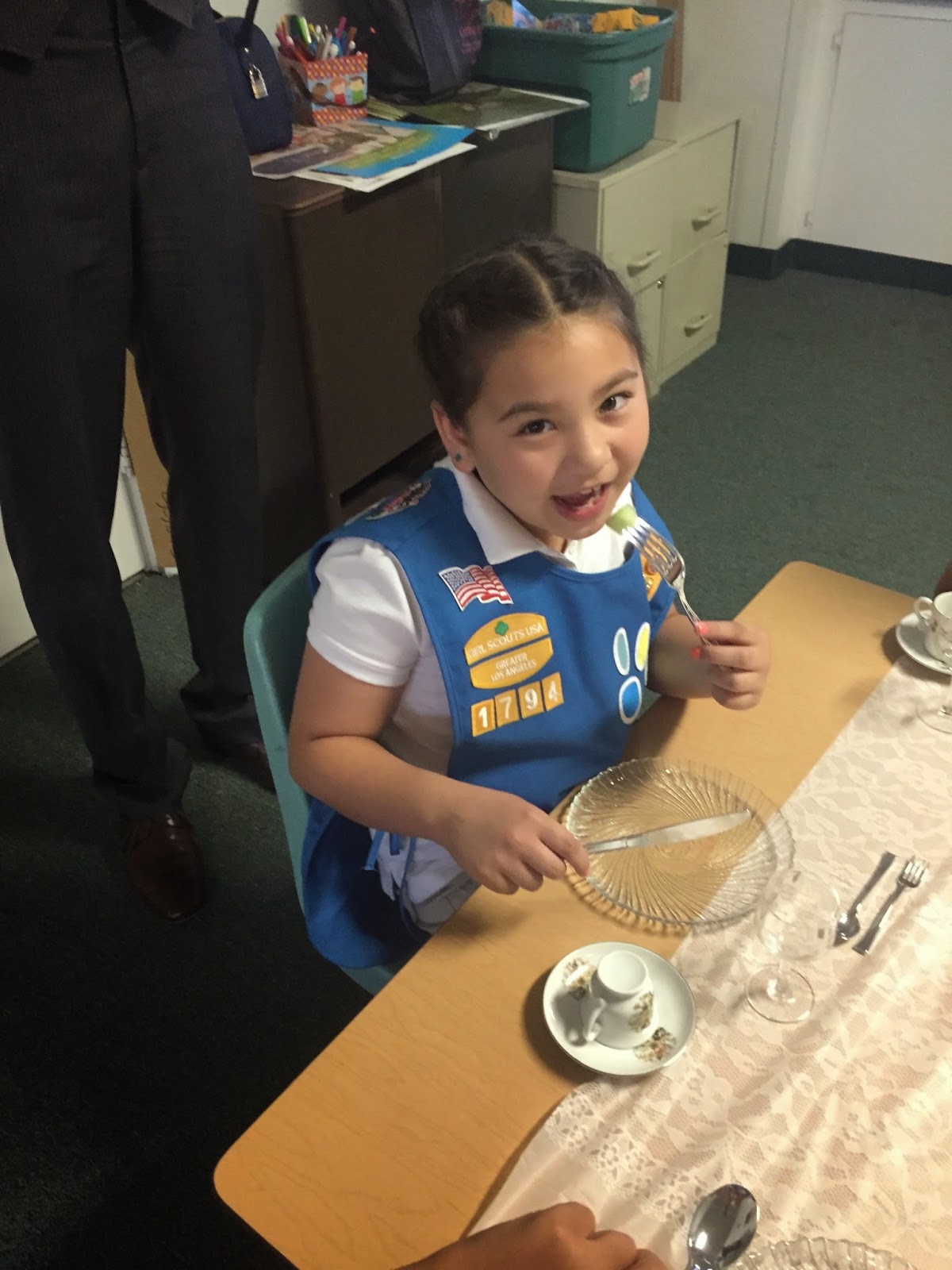 there's hope for my picky little eater yet.  and i may have beamed a little bit with immense pride when miss christina's son told me that she was a very kind and polite little girl.  we're trying really hard to raise her to be just that, and it's always nice to hear feedback from others that it's working.

when class was over, we got a group photo with our guests.  not only are group photos great for memories and all that, but we can look back on them to remember who attended what.  old age, man. it's a bitch. 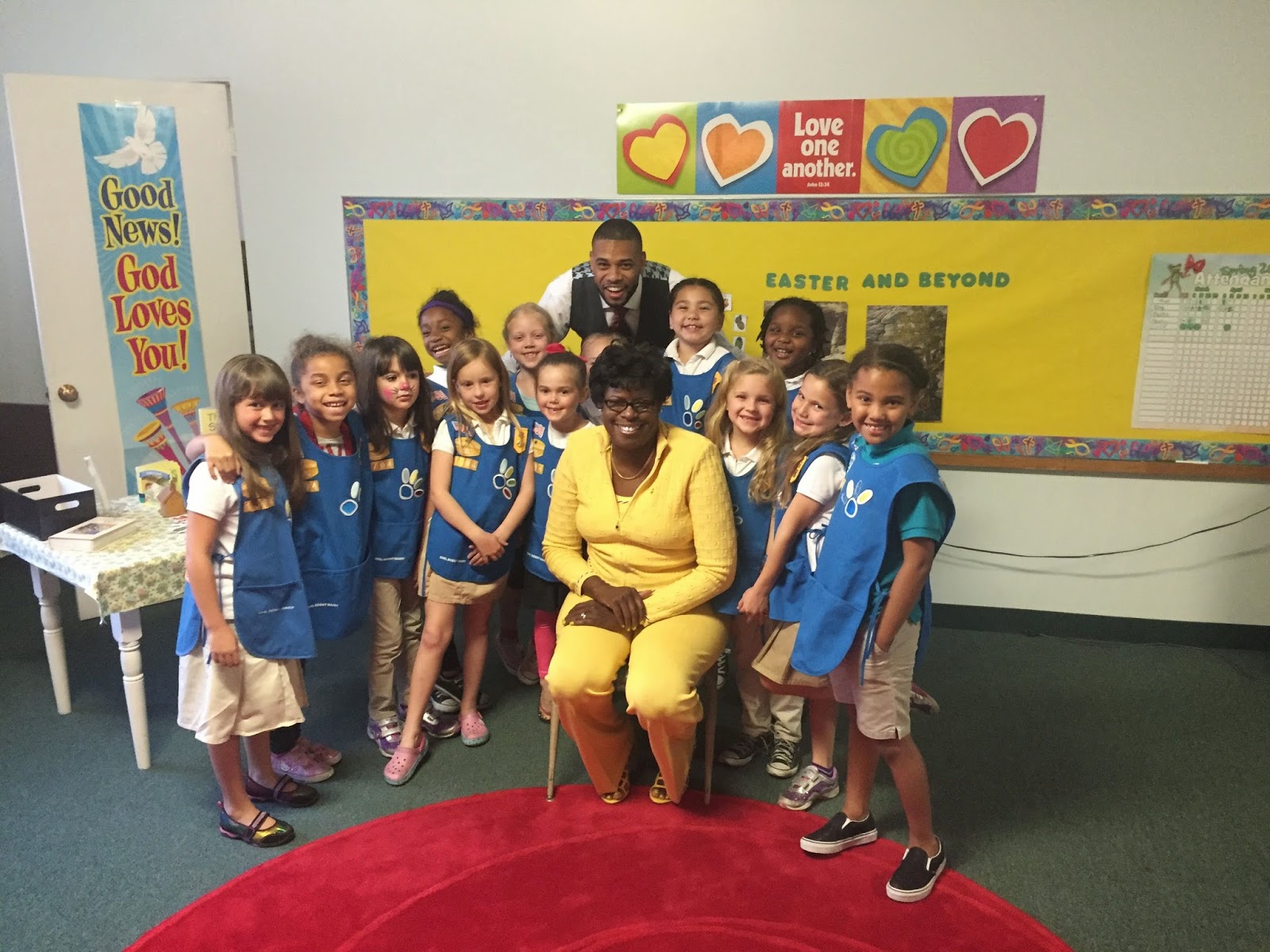 with the two petals they earned that evening, we only have two left to complete the daisy on the front of their uniforms.  and since we really only have four scheduled meetings left in the year, our timing is perfect.  i can hardly believe our first year of scouting is almost done!