if you wanna be my lovah

last week, the girls and i got our hands on some tickets to watch a taping of "america's got talent - extreme" at the fairplex.  it was a special edition of the usual show, with stunts and acts that required much more room than what they could get inside a studio.  we aren't necessarily fans of the show, but since it was practically in our back yard it was too good to pass up.

of course, when we arrived, there was a gigantor line of folks waiting to get in. 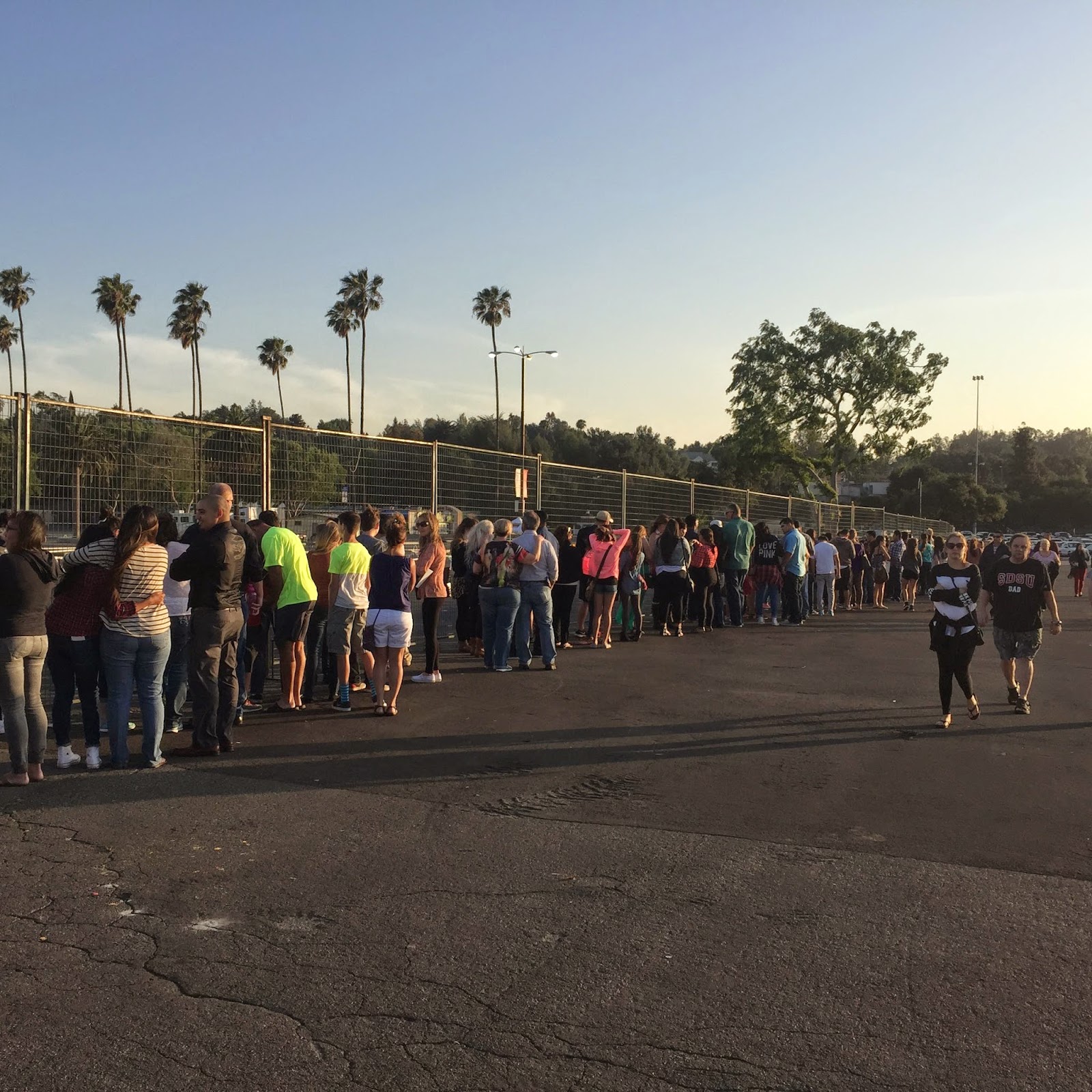 and off in the distance, we could see the name of the show on the marquee and on giant banners. 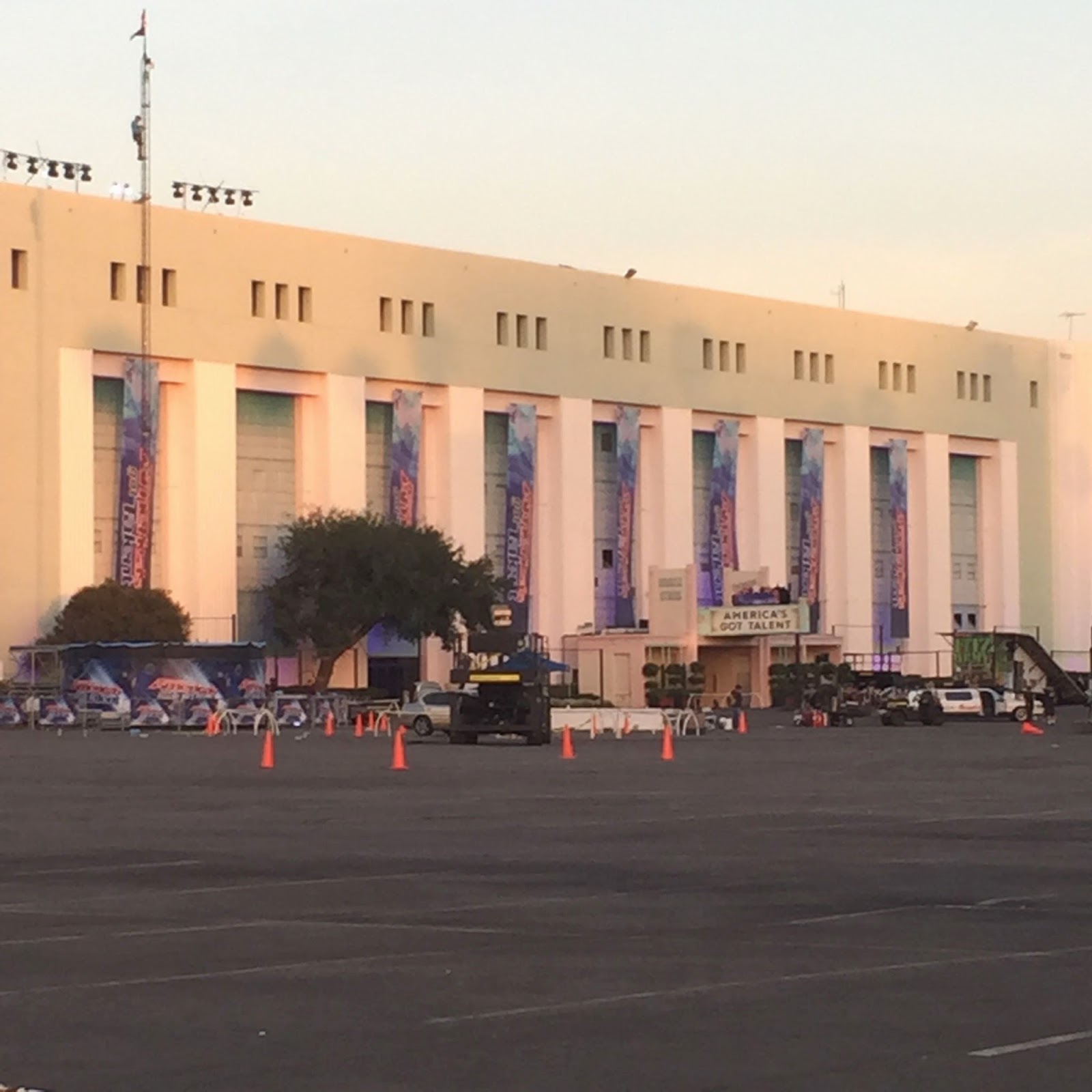 finally, the line moved and we got through security, only to be herded into yet another long line. 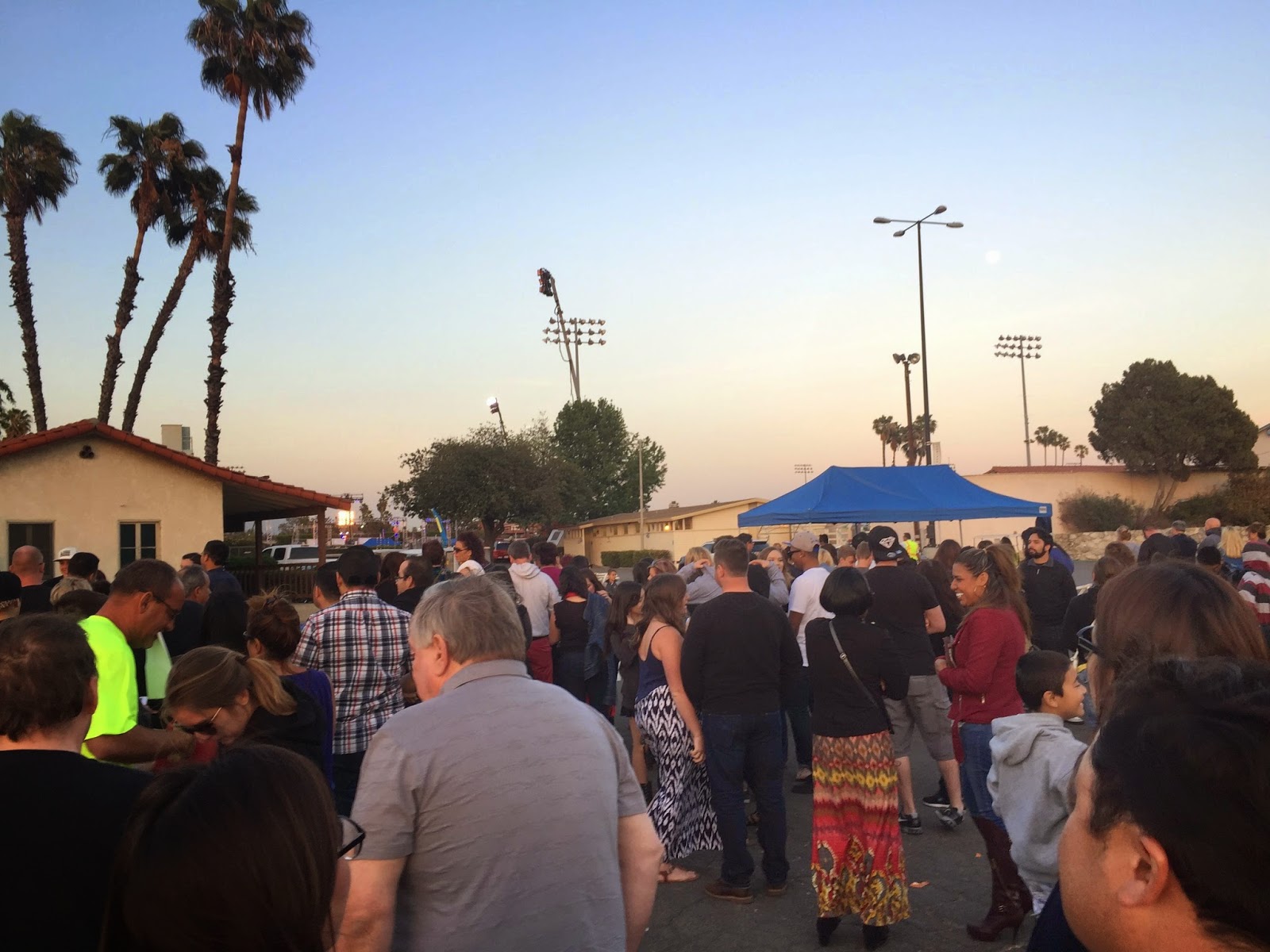 luckily, it wasn't a very long before we moved again and headed in towards the field, where cranes and giant trampoline-like things were set up for the various acts. 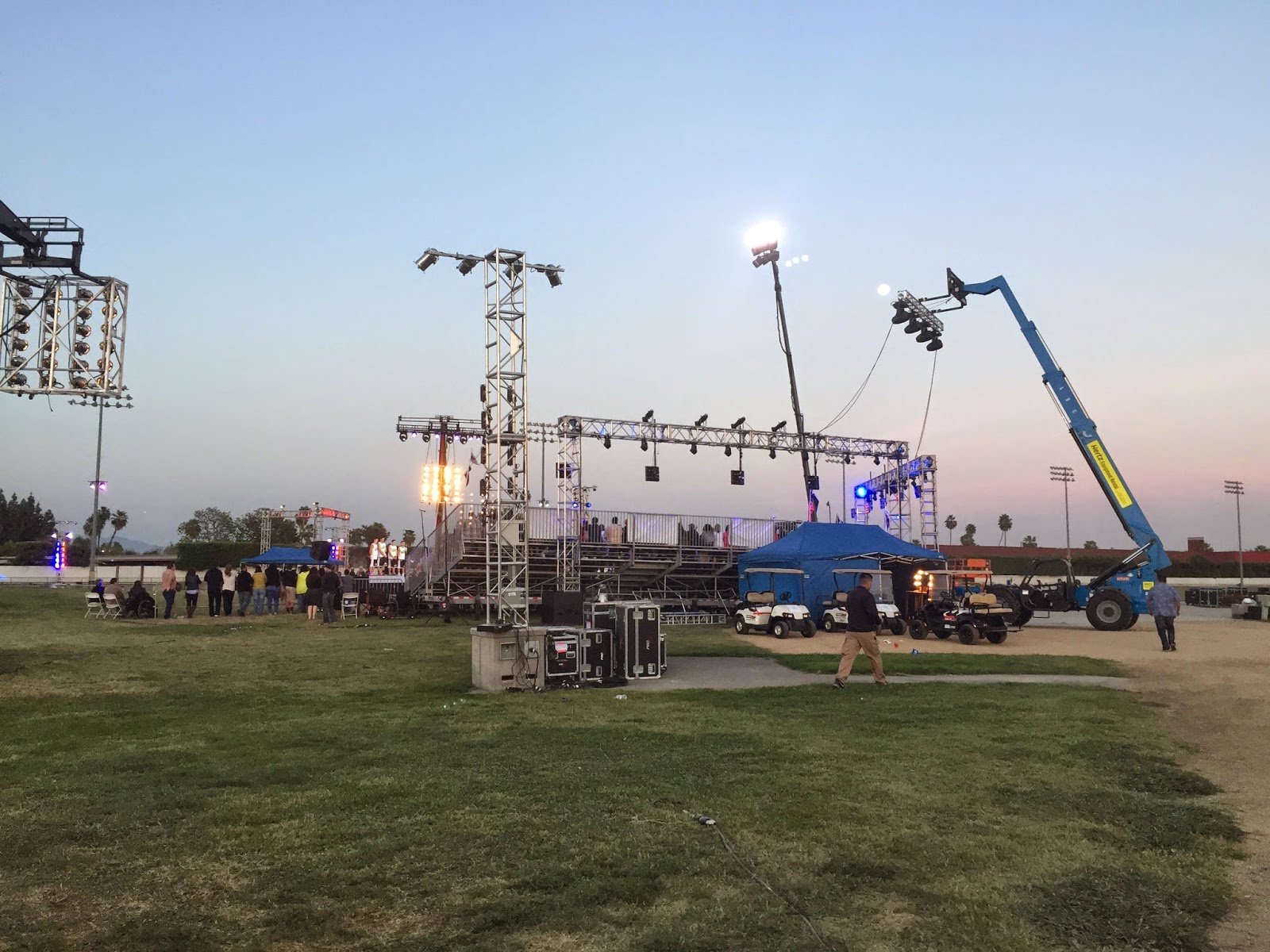 we found ourselves in the crowd of people surrounding the huge airbag.  some crazy thrillseeker was getting ready to go up 180 feet into the air via crane and then jump off, doing flips and twists and stuff before hopefully landing safely in the bag.  if you look closely, that's mel b., aka "scary spice" from the spice girls and howie mandel just off to the left of her.  being a lifelong spice girls fan, the teen was flipping out just a little. 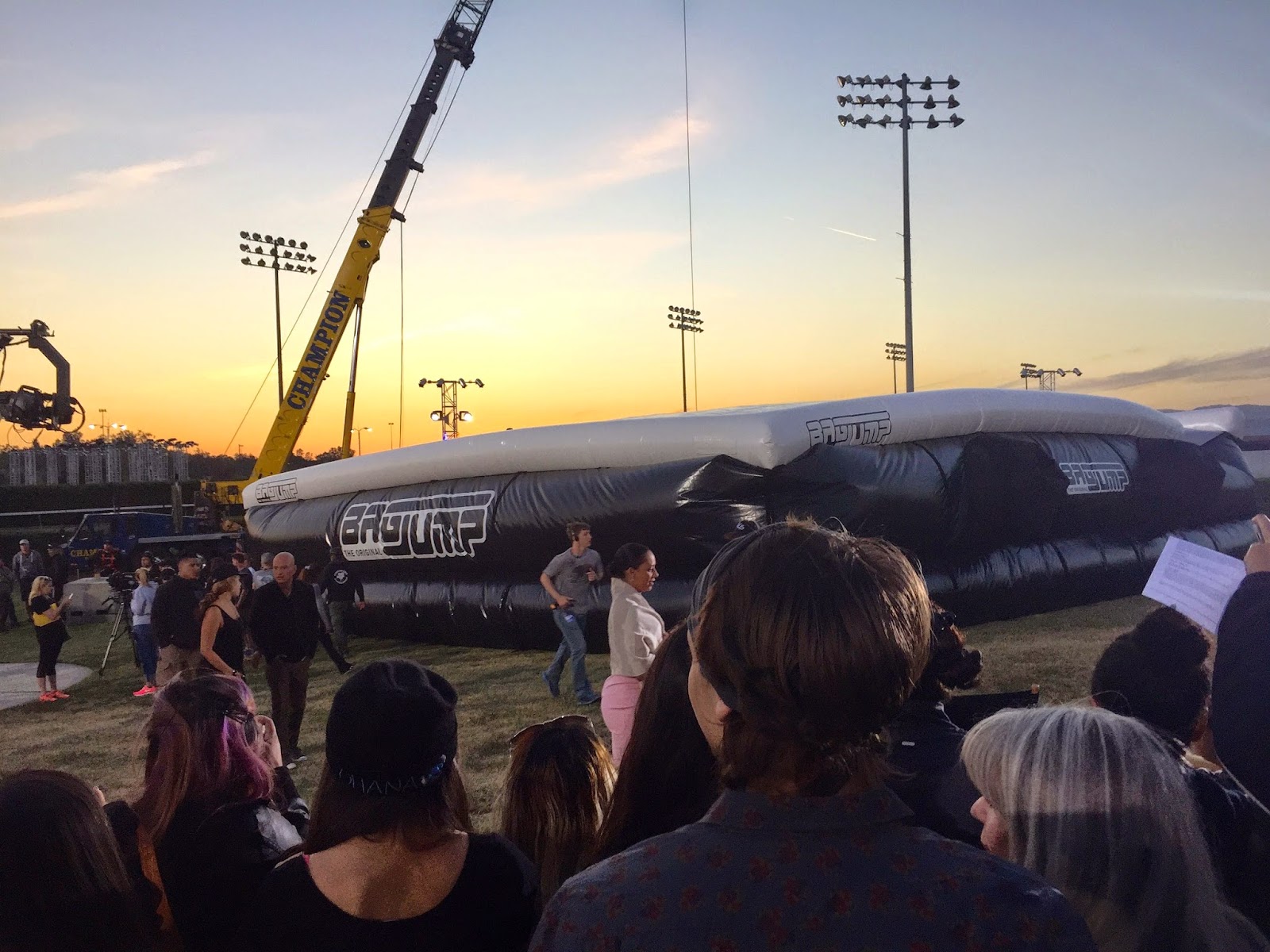 and here, we were just a few feet away from heidi klum and nick cannon.  howard stern was in there too, but the PAs were watching everyone really closely and yelling at us to put our phones away. 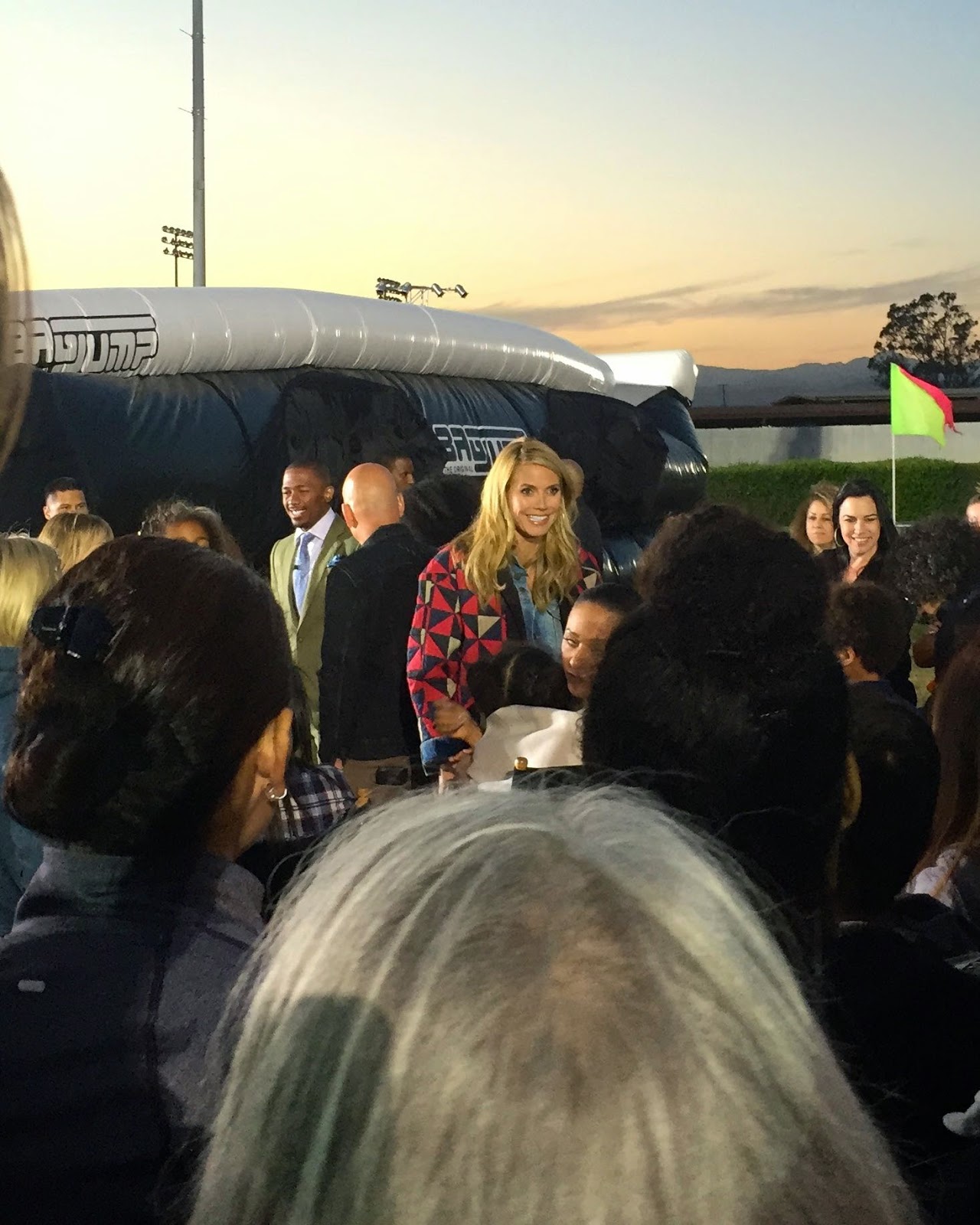 after watching the dude jump into the airbag twice - once as a test and then again for the cameras - both of the girls needed a potty break.  since we were literally corralled in there with barriers surrounding the entire crowd, we had to ask for permission from the nearest PA to exit and head towards the restrooms.  and then when we got back, the crowd was still being held in there - but i noticed a staffer pulling a handful of people out to take to another area for the next segment.  we hung back a little, knowing they weren't paying super close attention, and when they led the group towards the bleachers (away from the crowds that had to stand around), we quietly joined them.  muahahahaha. 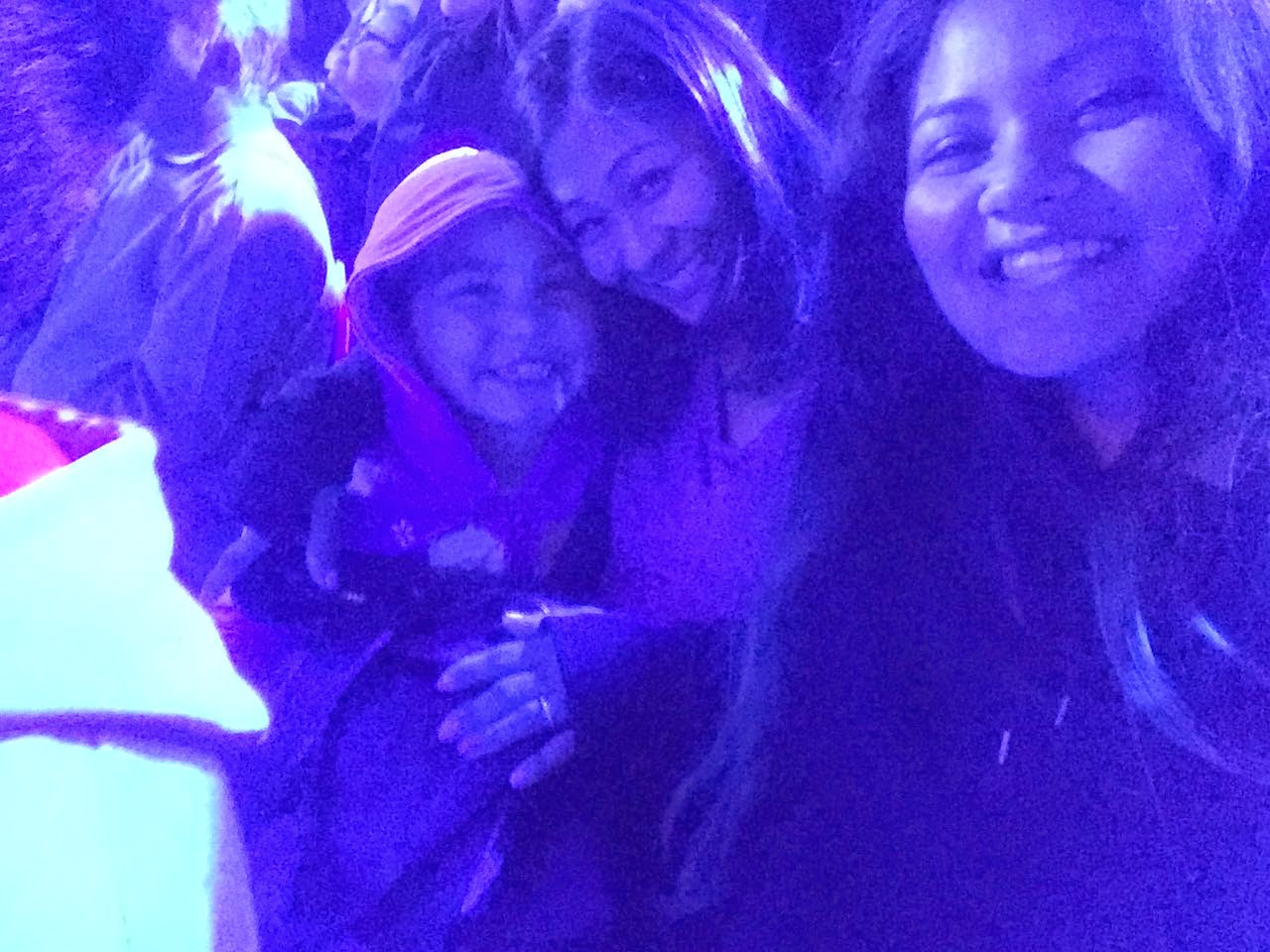 we had a nice view of the judges' stage, where they sat and interviewed the people who were there to show off their skills. 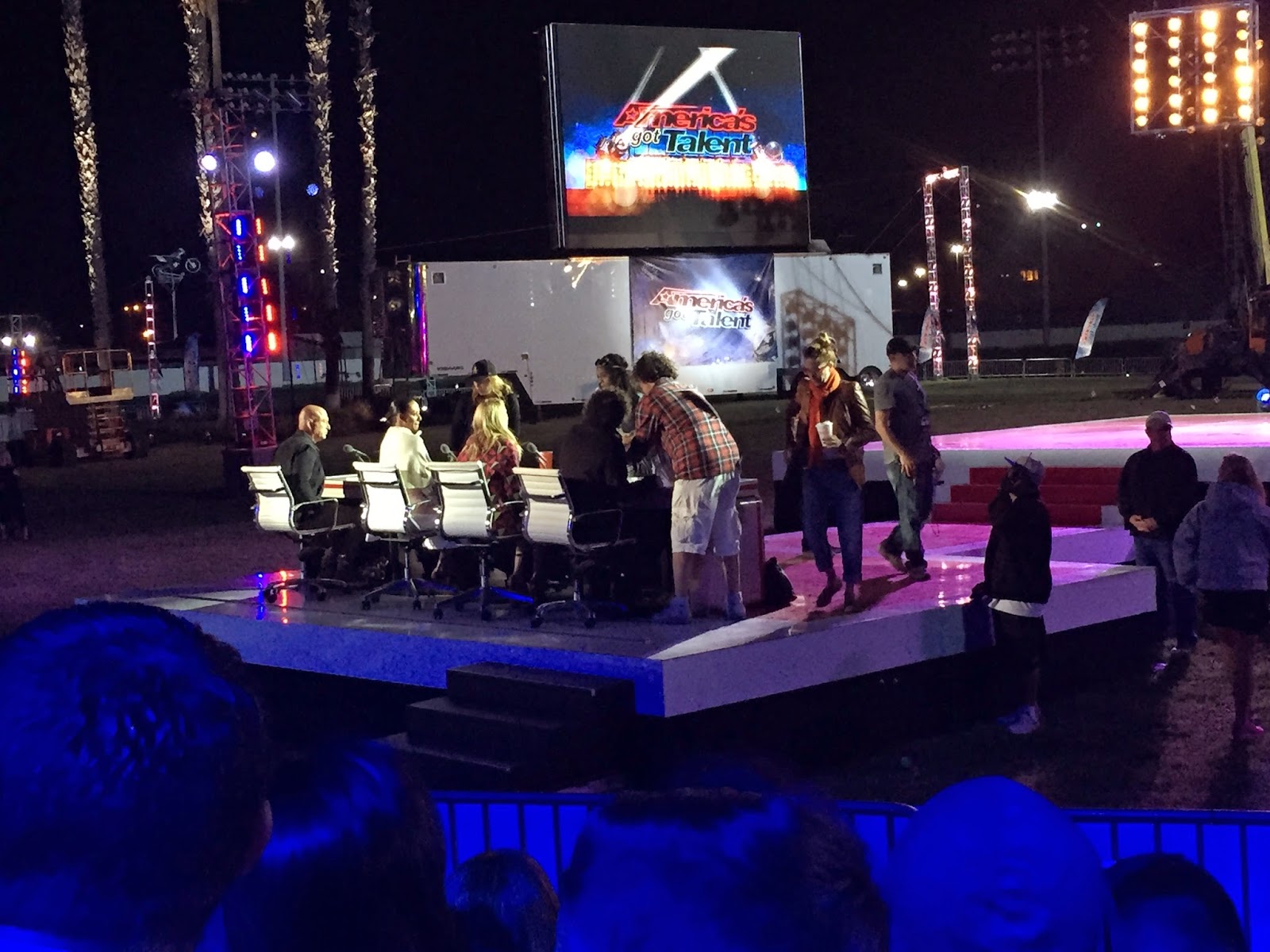 there was one guy who was going to climb up a 185' ladder and dive into a 9-foot pool of water.  then they interviewed the first dude who'd jumped into the airbag.  and lastly, a woman who started off as a roller derby girl and transitioned into stunting.  her act?  sitting in a limo that was going to be blown up, and then she'd be on fire.  people be cray.

it took forever and a day for them to set up that limo.  there was a guy there who was trying to keep the crowd entertained, playing games and tossing out glow rings and show t-shirts.  it was working, too - the audience was good and riled up, cheering and shouting and going out of their heads over this stuff.  it was funny and annoying and entertaining all at the same time.  and most of the time, we were treated to this view - this girl would NOT sit down for anything. 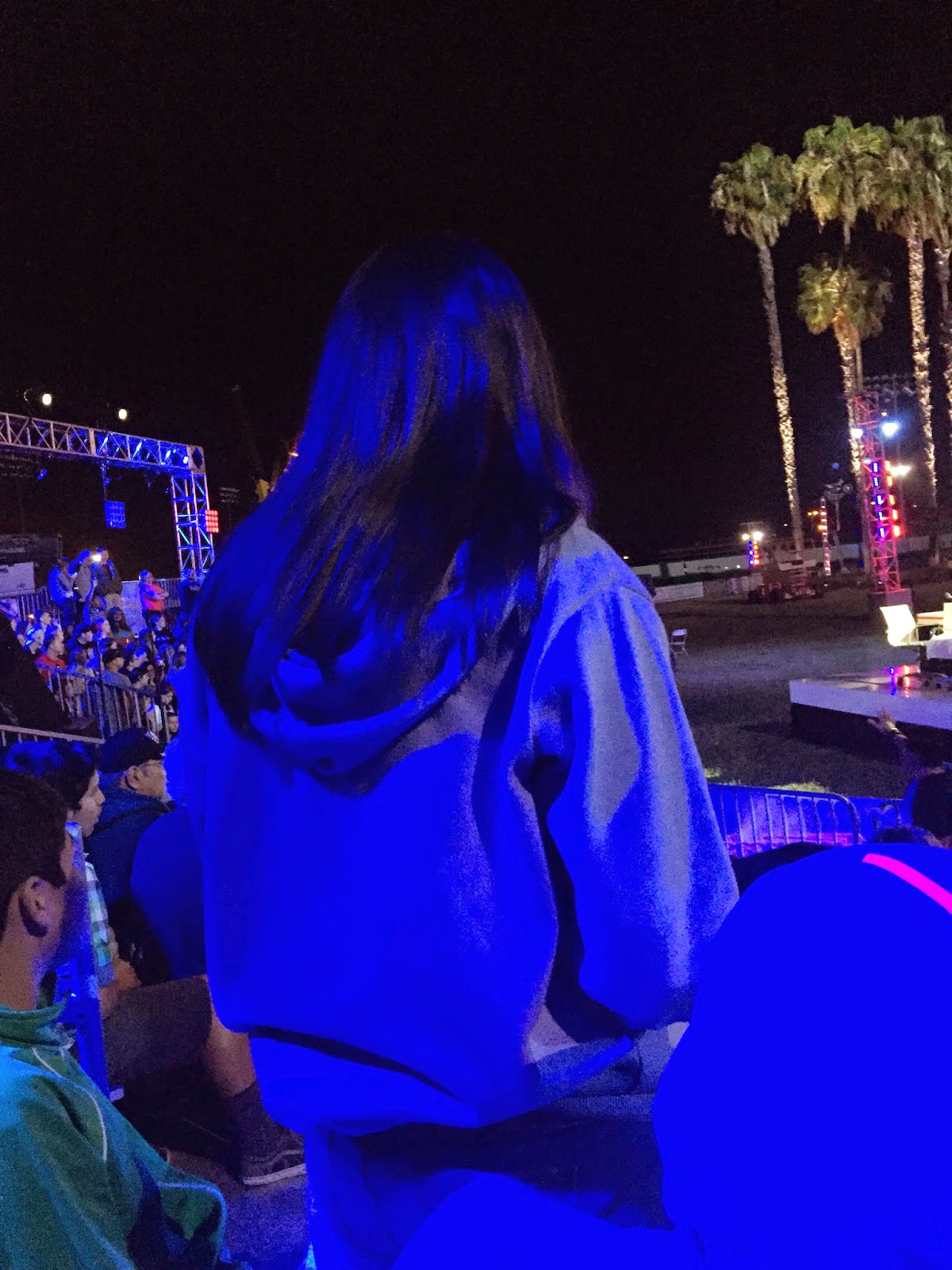 about two hours later, the limo finally exploded.  we watched it from the big screen, and it was over in maybe 15 seconds.  i'd forgotten that taping stuff like this is 99% waiting, 1% actual performances. 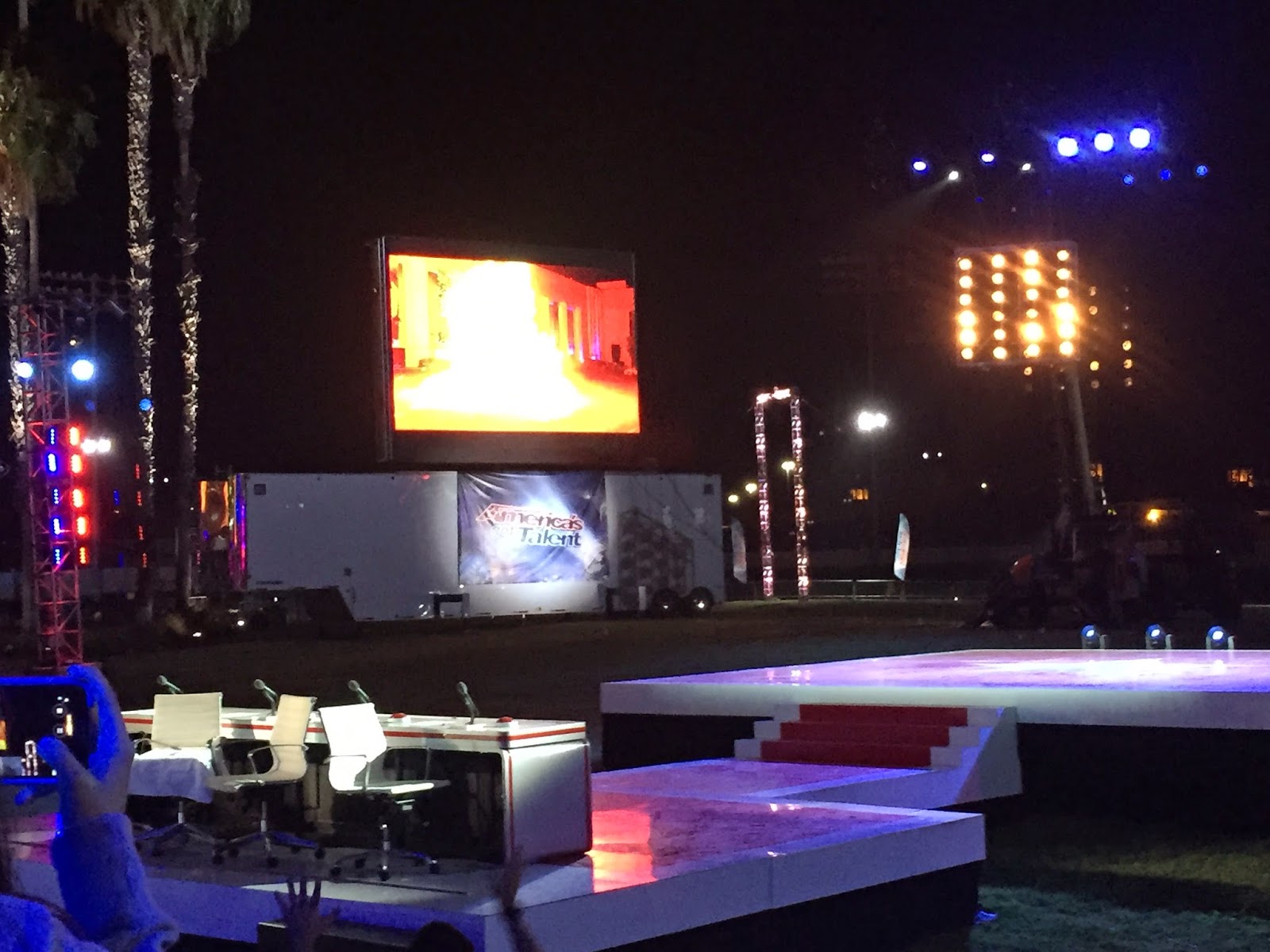 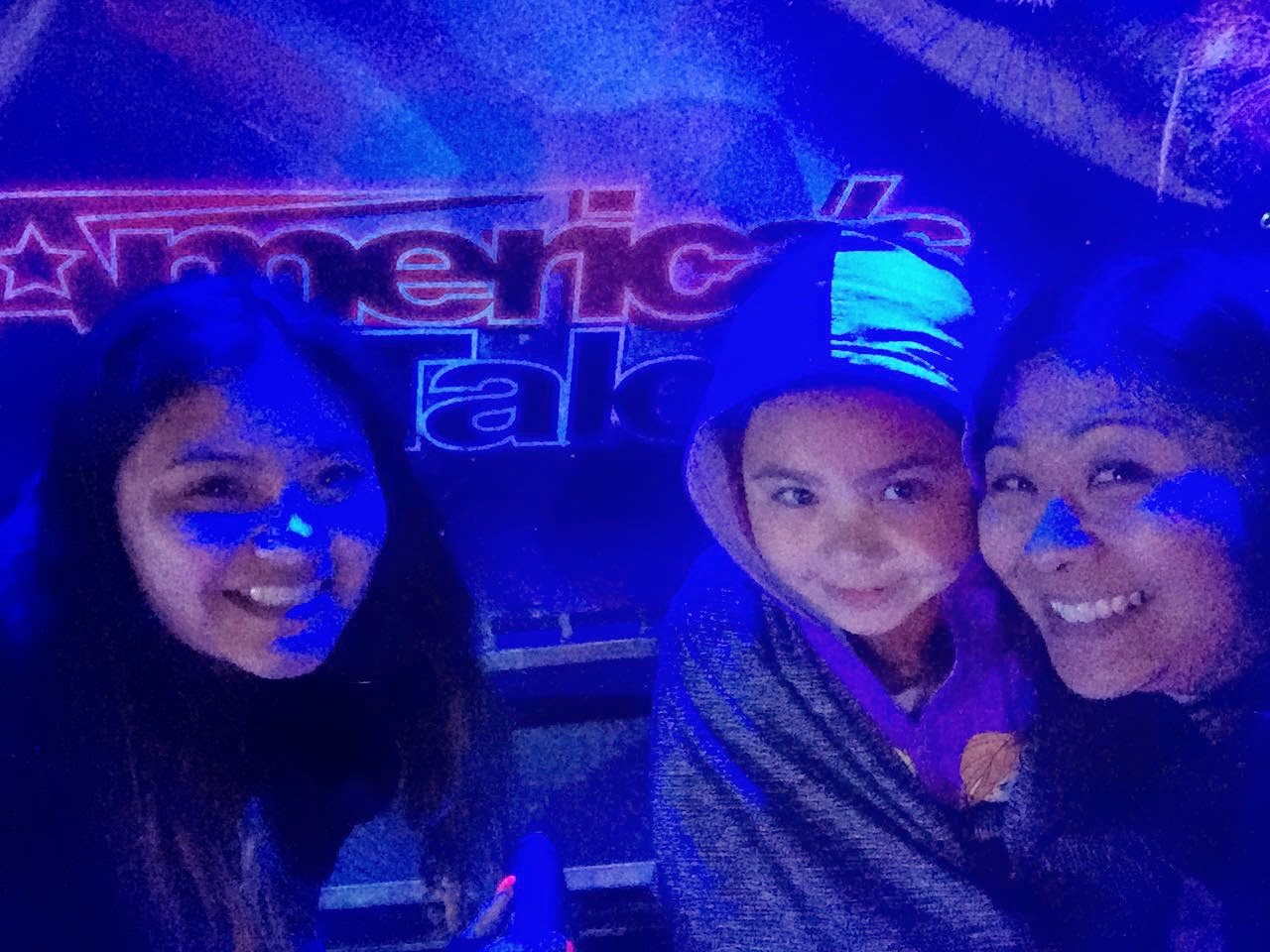 because it had taken so much longer than originally anticipated, another PA got up and announced that we'd be compensated via more tickets for a future show.  we were given the choice between the american idol finale, a taping of dancing with the stars, or another america's got talent.  of course, we had to wait around and watch the last act before we could turn in our requests.  you can see how happy the bean was about that: 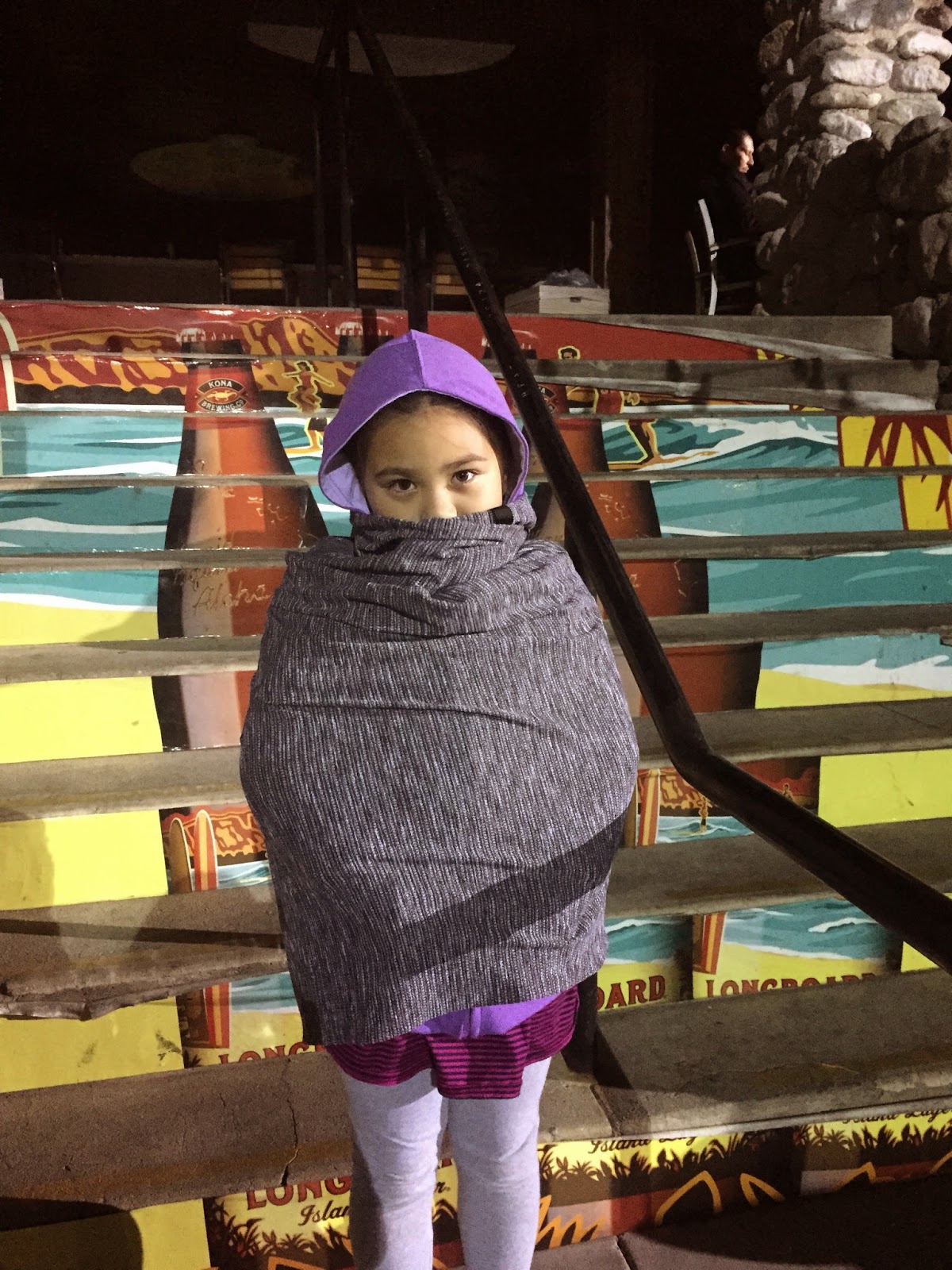 maybe it was because everyone was cold and tired, but it seemed like that final act was done in a lot less time than the others. 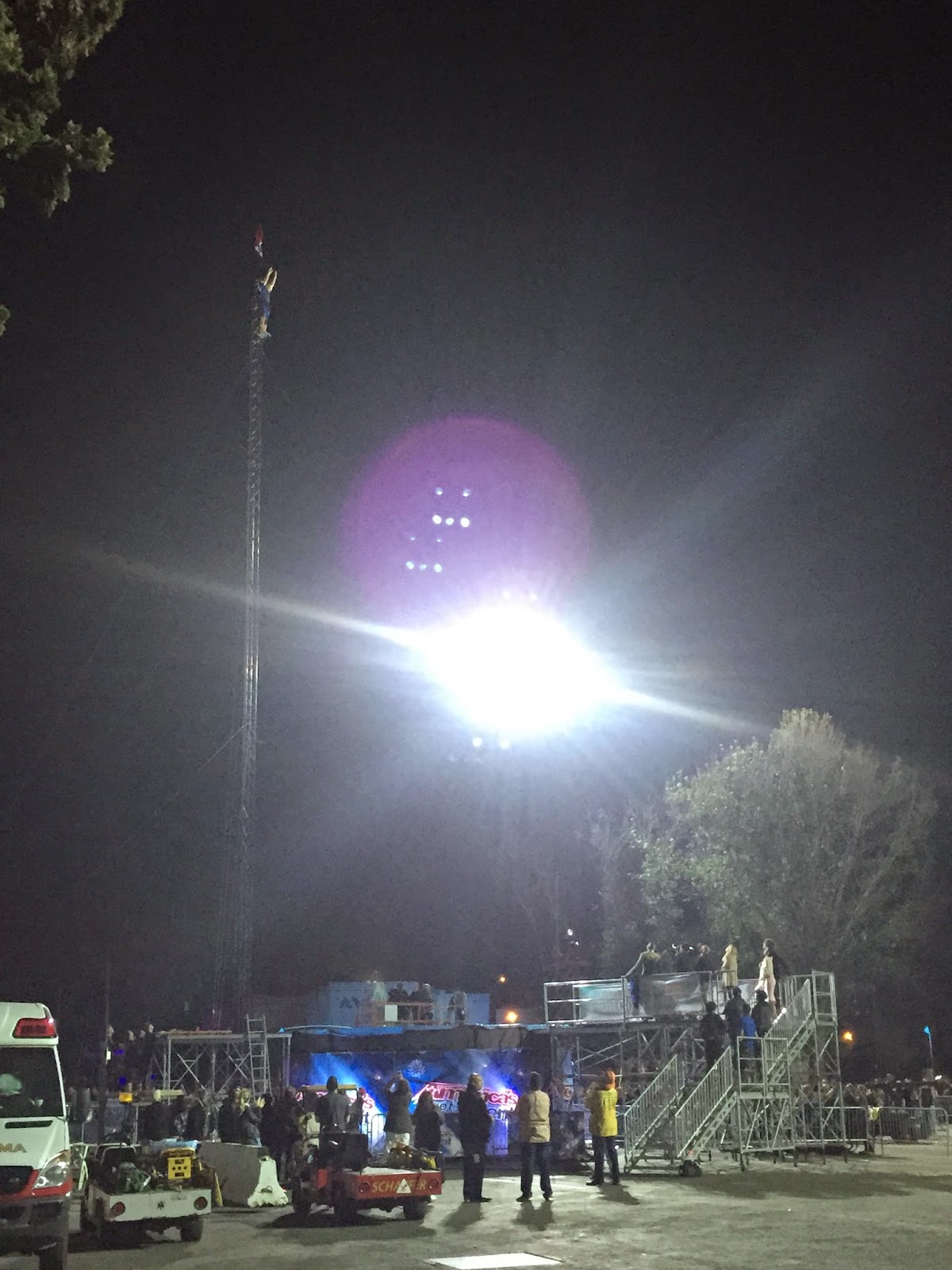 and when it was over, heidi klum and mel b. hopped onto golf carts and whizzed past us towards their  town cars. 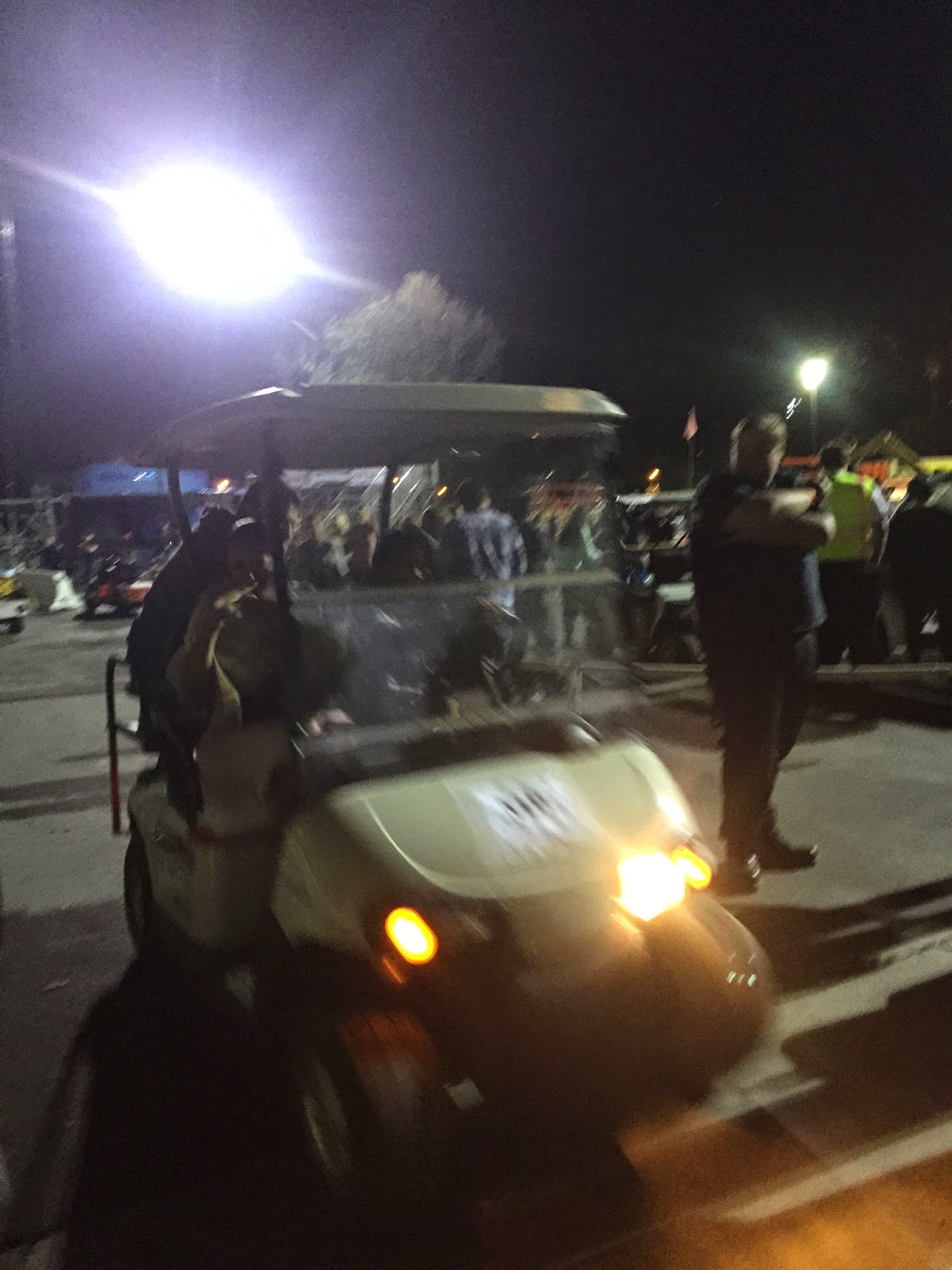 i don't even know when this show is going to air, but maybe if you watch it, you'll let me know if you catch us in the audience, yeah?
at April 09, 2015