discovering the world of unboxing

so the bean is not your typical kid when it comes to toys.  i mean, sure, she has buckets full of stuffed animals that she loves and a toy bin with stuff like american girl dolls and mr. potato head parts and other random disney-related toys.  but they go mainly untouched unless we've got people with kids over.  like, the party we had at christmas was the most action her toys had seen in a long time.  for the most part, she'd much rather read books, ride her scooter, or draw than play with dolls and things.

except that through her friends, she's discovered the world of shopkins.  now, i honestly still don't understand the whole concept.  they're, like, tiny squishy pieces of plastic shaped like food or housewares with little faces and silly names.  i guess you can make up little stories and scenarios and collect them - each piece has ratings ranging from "common" to "ultra rare" and i don't know what that all means, but it's all the rage with the younger elementary school set.  i thought i'd managed to escape it all, but then she started watching those unboxing videos on youtube.  grown ass people buy these blind bags, set up a video camera, and record themselves opening these things up with a running commentary mostly consisting of "oooooh, cool!" and "aaaaaah, this one is a limited edition piece!'

at first, i figured, sweet - she can get the excitement of opening those stupid little bags up and seeing what's inside while living vicariously through someone else.  and i don't have to go out on the scavenger hunt for these hard-to-find things and spend money on them.  win-win, right?

womp womp.  she finally decided she really wanted to have a few pieces for herself.  and me being the sucker i am, i ended up visiting no less than eight stores in one day trying to get my hands on some for her.  she's such a good kid on the regular that i just like making her happy with little things like that.  and so when i picked her up from school, i had it all arranged in the back seat like so: 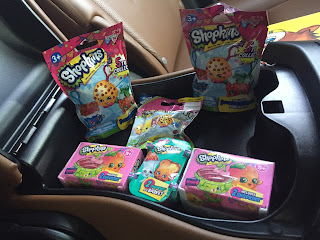 she was super excited when she found my surprise, and immediately decided to go home and make her own unboxing video.  i made her get through the evening routine first - homework, dinner, shower - and then i set up my phone on my old gorillapod on the dining table and let her go at it. 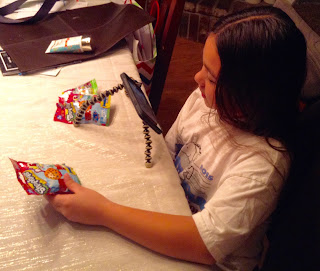 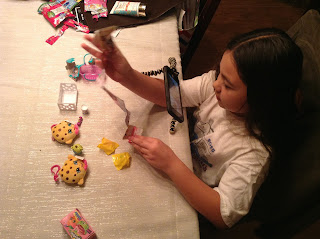 it was really funny to listen to her, because she'd watched and listened to enough of those videos to kind of get the feel for what she wanted to say.  i told her to call herself what i call her online instead of her name, and if you've got 4 minutes and 25 seconds to spare, here's what she came up with:


she's got a few more packages to open, which she's saving for when she has time to make more videos.  although she seems to have lost interest in it already, because she hasn't really said anything more about it.  maybe i'm off the hook after all.
at January 28, 2016

Email ThisBlogThis!Share to TwitterShare to FacebookShare to Pinterest
Labels: bean is a video star, new toys