just yesterday, in a galaxy not too far away....

after dragging her to an early morning barre class and then letting her nap for a couple of hours, i got the old lady to accompany me to the health & fitness expo at disneyland hotel for the star wars half.

parking the car was relatively easy, and the finish line for what i'm assuming is all of the races was all set up. 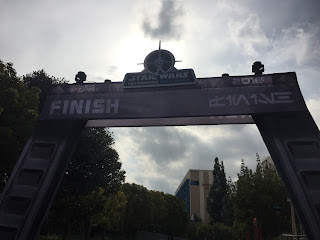 this has become quite a familiar sight by now: 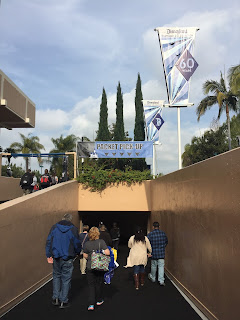 and i'm kind of kicking myself for not realizing i'd cut off part of the left side of this shot as i rushed to snag it with no people in the background.  damn. 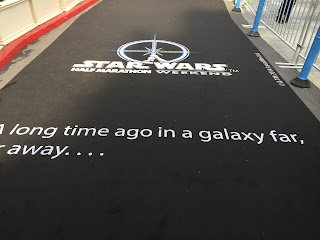 there were lots of folks wandering around the bib pick-up area, but it was relatively easy to grab bibs for me and the bean (and also for our two friends who are running the kids' race too). 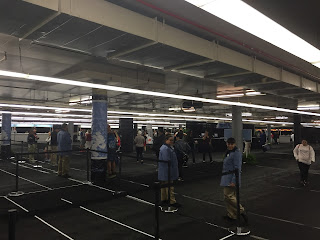 upstairs near the entrance to the expo, i apparently thought it was a great idea to make the same stupid open-mouthed face for most of the photo ops. 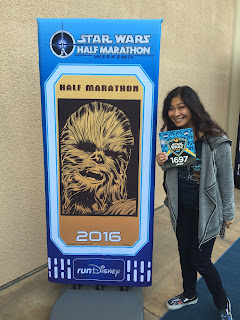 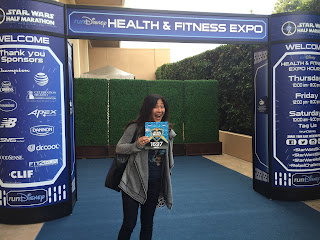 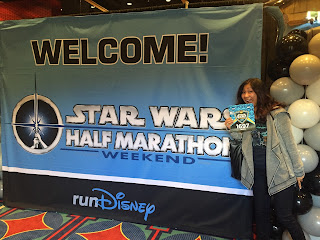 and at the photo op inside, too.  sheesh. 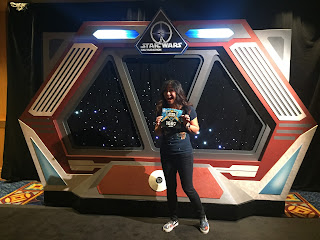 we checked out the line for the official merchandise area, but it was ridiculous as we'd expected.  you had to go upstairs and into one of the ballrooms that was being used as a holding area.  then you were split up into several lines and then paraded randomly back downstairs and through the hotel, eventually ending up in another line at the entrance to the race merchandise shop.  pfffft.  instead, we wandered around the expo and looked at all the fun stuff the vendors were hawking.

i liked both of these tops, but i was trying to be good so i held onto my debit card and didn't pick up either one. 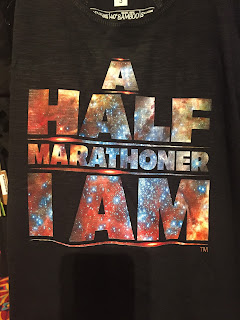 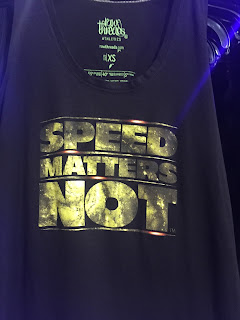 i'd forgotten all about signing up for the virtual queue for the new balance shop, which is probably a good thing.  here's the lineup of the 2016 run disney new balance shoes: 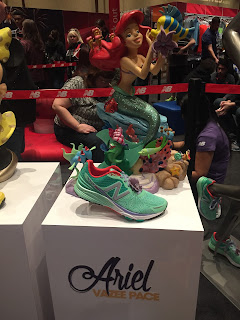 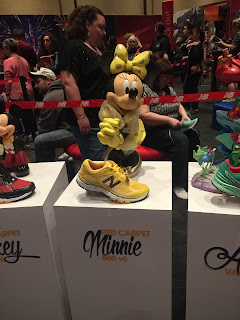 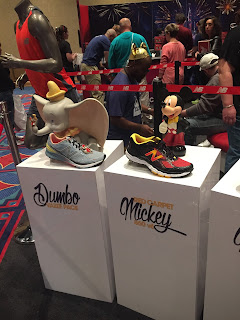 i reaaaaaaallllllly like those ariel shoes.  they're really pretty, and super lightweight.  here's a couple of close-up shots: 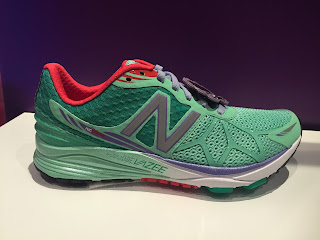 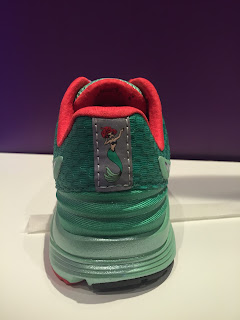 the old lady side-eyed me and reminded me that i still have a brand new pair of the tinkerbell-themed NBs in my closet before dragging me away to look at other stuff.

we hadn't had lunch yet, so the samples at the clif bar tent sucked us in. 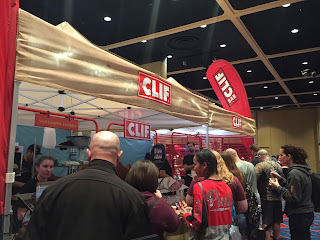 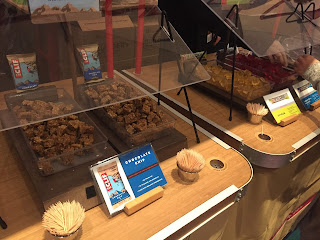 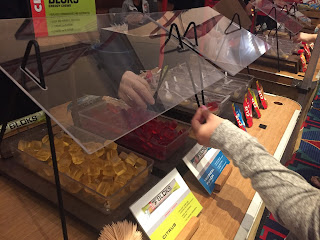 now, i know this sounds really gross.  this is part of a new organic race fuel line that clif has developed, and since most race fuel is sweet, i was intrigued at the idea of something savory: 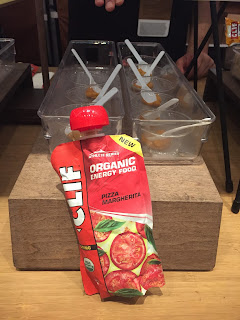 i'd received an email when they first announced this line, so i was kind of excited to see that i could actually sample it without having to spend money on it.  while the old lady grimaced and wrinkled her nose at it, i happily grabbed a little cup and shoveled that sample right into my mouth.  and guess what?  it's super tasty!  i really like it, but was kind of puzzled to learn that they didn't have any of it for sale.  all they had was what they were sampling, and so now i have to see if i can track it down at a local store.  boo.

at another booth, we tested out the "BFF" - a device touted as an electric foam roller.  now, i'm not a foam roller devotee.  i don't even own one of the damn things.  and this particular contraption reminded me of something you'd use to buff scratches on your car.  but we both tried it and i gotta say, i was actually a little less sore afterwards. 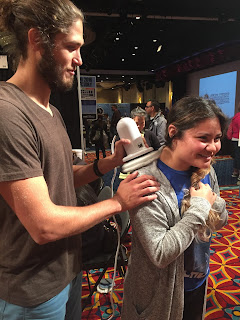 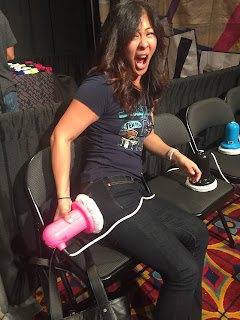 i was happy when she threw me a bone and joined me for this photo op.  we had to hold the pose for a few seconds, which was awesome considering we could hear onlookers waiting in line cracking up at the sight.  oh, well - it was worth it. 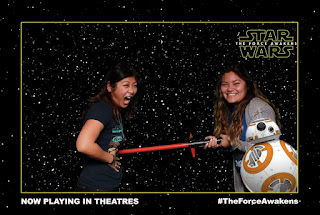 also - since when does run disney do cocktails at the expo?  well, since now, i guess. 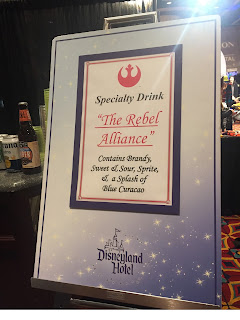 one last photo op at the official run disney/instagram booth, and then we were ready to go out and find some lunch. 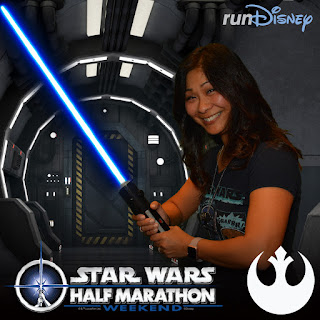 and yes, i realize that a true jedi probably shouldn't look so damn cheerful.  whatever.  i had a light saber, fools.  that was cool.

we grabbed lunch to go from this place: 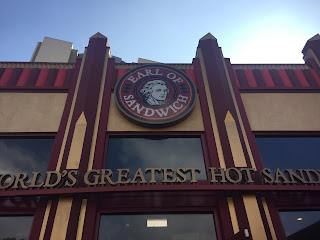 and that's it until saturday morning, when we return to watch the kids do their race.  it's gonna be such a great weekend.
at January 15, 2016