it's amazing to me that the bean has been doing run disney races almost as long as i have.  she's got enough medals to fill up a good-sized medal rack by now!

when she saw my rey costume for the star wars half, she decided that she wanted to be rey too.  and with a little disney store magic, i was able to snag her a costume in time for the kids' race.  she kind of groaned and rolled her eyes when she heard that we moms were going to wear our race costumes so that we could get fun pictures during their race, but i know she secretly thought it was cool.  i think.  whatever, we were doing it anyway.

maybe i just didn't pay attention before, but i don't remember having to go through security or bag check before races in the past.  although with the new costume guidelines and all of the new rules at the parks and at the races, i wasn't really surprised. 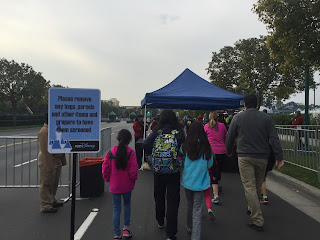 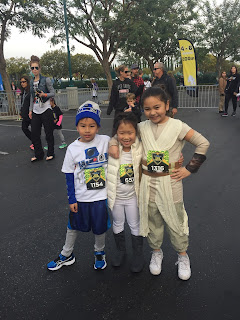 and i had to have one of the two of us, since we were twinning. 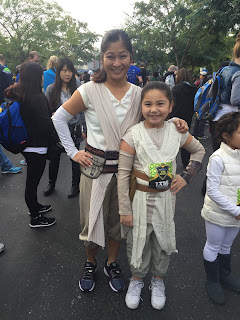 the girls are run disney veterans by now, so they knew the deal.  there's always a good amount of waiting around until it's our turn, because they do the younger kids first and since the races always sell out, there's a lot of kids to get through before the next age group can go.  mini DG got pretty antsy after awhile, but the girls managed to keep him occupied with games on the phone. 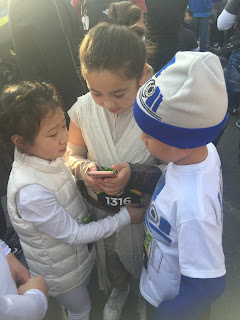 now, i know these kids are fast.  they're sprinters, all three of them.  but i was totally caught off-guard as the cast member yelled "GO!!" and they. took. OFF. 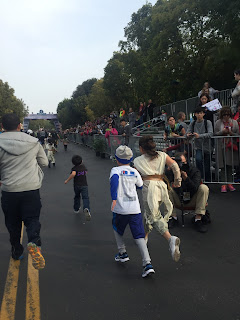 i had a little trouble catching up to her, but i finally caught her as she slowed down at the curve.  you guys, this was a 200-meter race and i was panting and wheezing like i'd never run a step in my life.  i jogged along next to her as she grinned at me and kept on going.  and i was so thrilled when i was able to catch this picture of chewbacca waving at her as she scampered towards the finish line: 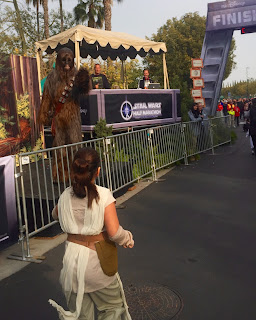 i can't help but grin like a loon every time i look at that. 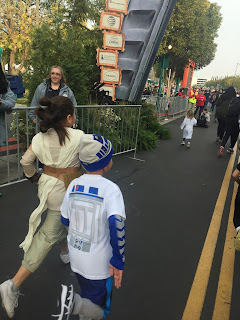 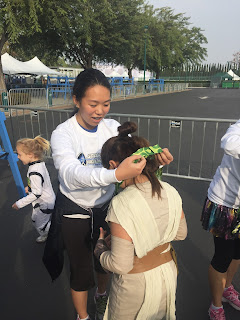 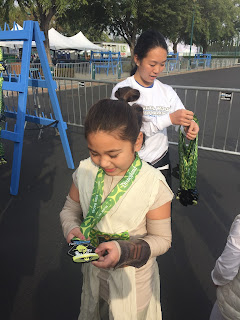 yay for star wars medals!  we took advantage of every photo op, of course. 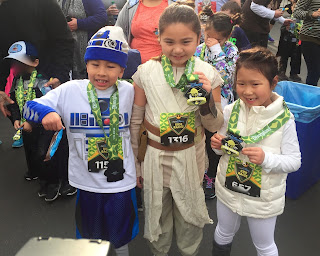 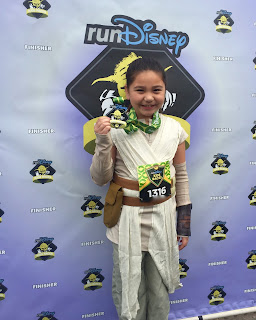 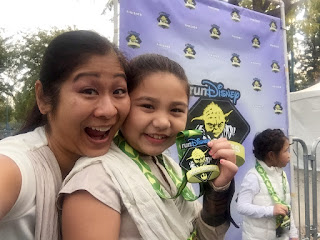 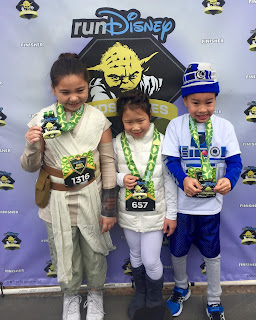 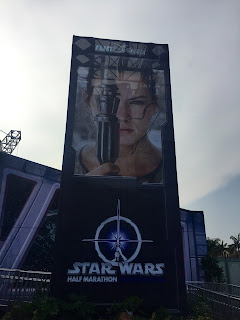 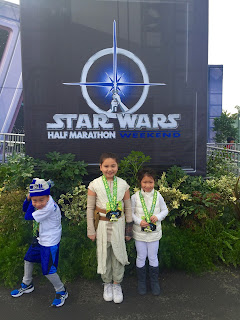 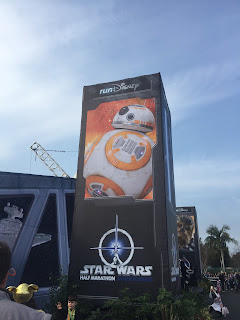 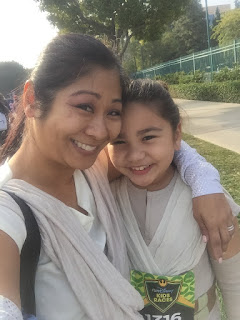 as we headed out of there, i was trading text messages with a friend i've known for a full decade but had never actually met in person.  that's wacky, right?  we were both on the local knot boards during wedding planning and keep up with each other over facebook.  it was awesome to finally give her a hug and chat a little bit. 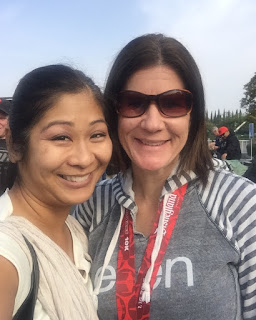 then we headed over to disneyland hotel and visited the expo again, since daily gluttony and lilcee both still needed to pick up their race packets for the next day's half.  we ran into this dude, who had apparently gone all out for his 10K costume but wasn't allowed to wear it per the guidelines.  i guess he figured, might as well wear it where he could.  the kids got a kick out of it. 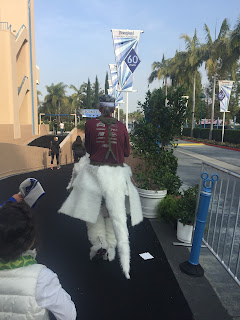 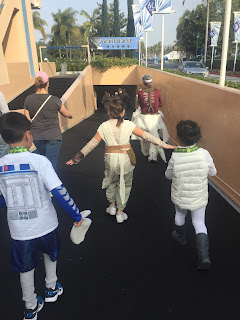 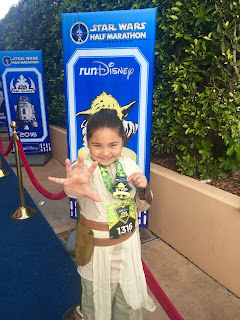 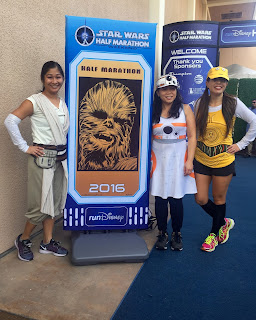 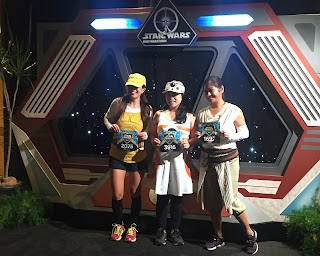 and while the others picked up their race shirts, i took the bean over to the run disney instagram booth to get her own light saber portrait.  it looks like this before the CGI magic: 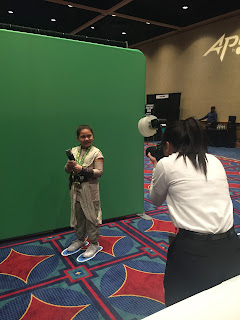 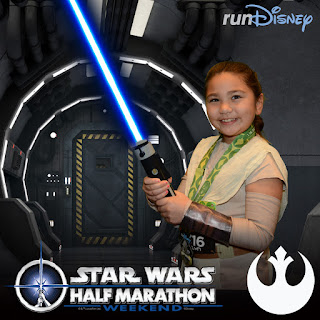 the kids had some fun decorating signs in the area near the stage. 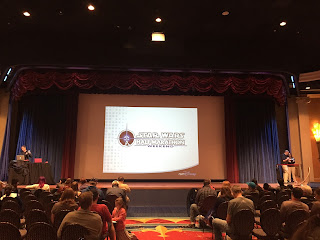 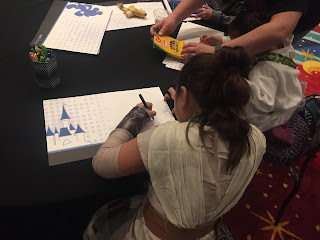 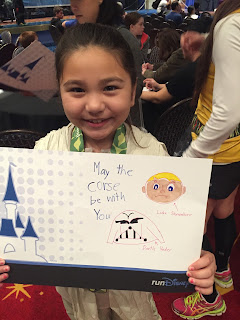 and then that was that.  another fun kids' race at disneyland!  we're getting close to the maximum age for these things, so we have to enjoy them while we can.  next up - disneyland half marathon races, over labor day weekend.  the old lady wants to run the 5K and i've never done one with disney before, so that's going to be super fun!

it never ends, folks.  never ever.