despite having stayed up on christmas eve till after 1 (which is nothing new, really), we found ourselves up and about somewhere around 7am the next morning.  the bean, who had been up almost as late as the rest of us, was full of christmas cheer and energy as she bounced into everyone's rooms to get us all out of bed.  and since her excitement was contagious, we happily got up and made our way to the office, where our tree had been set up this year. 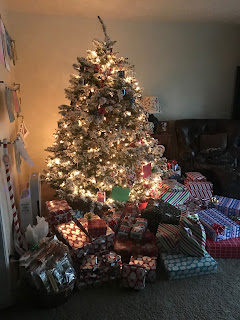 yes, there was an obnoxious number of presents under there.  although some of those were for other folks, and the rest were to be split amongst the five of us.  on top of that, there were stockings for everyone to dig into: 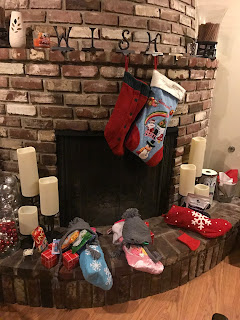 the old lady was wearing her christmas slippers. 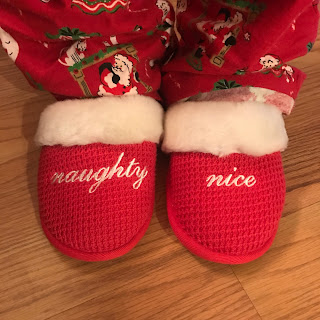 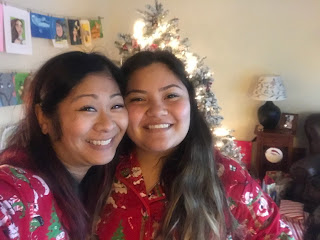 as we always do, we went through the stockings first.  i found all sorts of fun things in mine (thankfully, no butt wipes again): 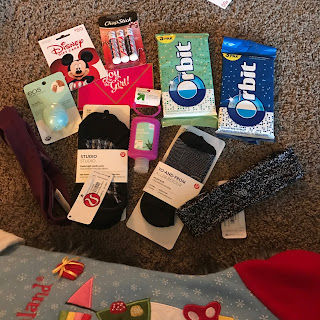 the bean was a little less than amused at what she found in the bottom of hers. 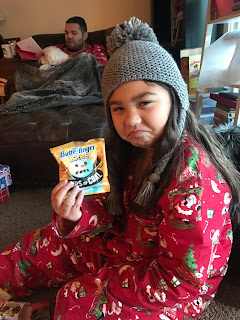 mollydog had found herself a nice comfy spot to hang out in amidst all the ruckus. 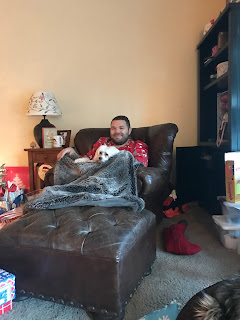 the bean had proclaimed herself as the official "present giver-outer," and she was happy to get to work once all the stockings were empty. 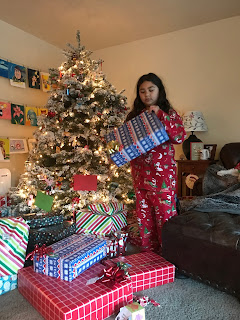 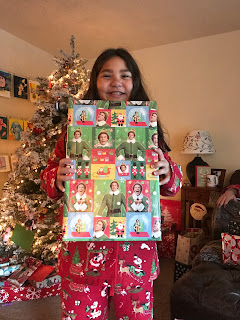 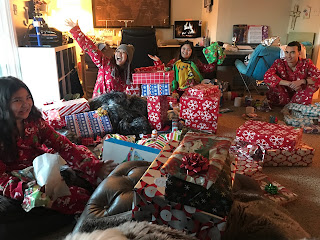 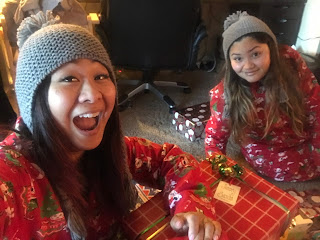 the majority of the bean's list had consisted of a bunch of different types of "squishies."  have i talked about these before?  she discovered them via youtube, of course, and they're these silly little japanese toys that consist of super soft, super squishy sponge-like material that are shaped into different things - mostly animals and bread/bakery products.  some are animals in bread form.  it's really bizarre, and apparently the best ones are "super slow rising," which means that when you squish them in your hands, it takes an absurdly long time for them to come back up into their original shape.  they remind me of stress balls, and while they are pretty fun to squeeze i just don't get it.  and the craziest thing?  some of these are known as rare, or super rare, or ultra rare, and go for stupid amounts of money.  the average cost of, say, a squishy made by iBloom in the shape of a giant strawberry goes for about $30.

anyway, one of the squishies she most coveted was the rainbow cake slice.  one of my mom friends at school had gotten hooked on finding these damn things for her and her daughter (who my kid managed to reel in on the squishy craze too), and she'd found a gold mine of the best and rarest squishies in a hello kitty store not too far away.  and so... 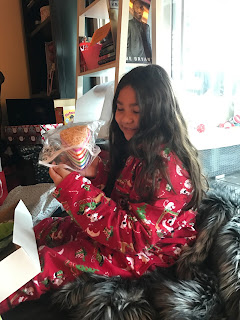 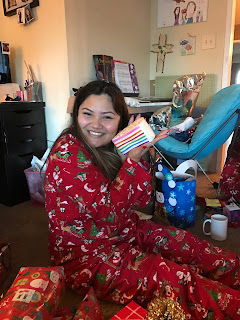 meanwhile, i was super excited to find that santa had gone on a lululemon shopping spree for me. 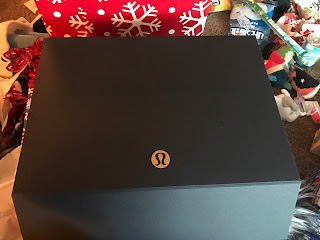 the bean scored some pretty fun stuff too, like this puzzle ball shaped like the death star from star wars: 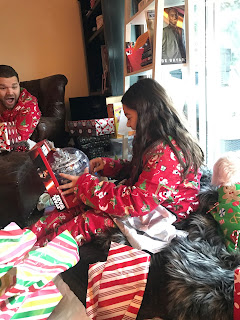 the american girl doll she'd been wanting since her birthday: 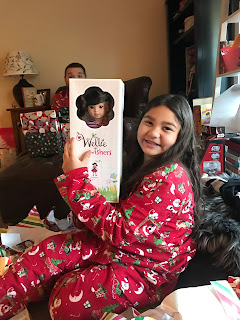 and a set of my little pony figurines that were also pretty high on her wish list. 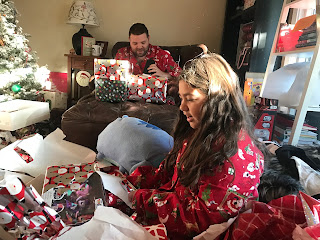 too bad one of them became the first christmas casualty as she took them out of the box.  boo. 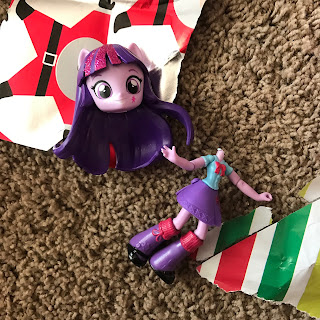 oh, and all this was going on with the traditional yule log and christmas music going on in the background (that fantastic desktop sign comes courtesy of my buddy lilcee). 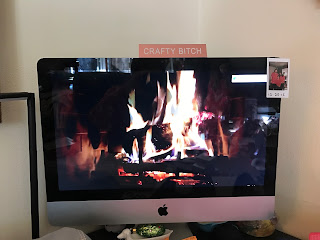 i finally came through on an IOU i'd given the old lady's special friend exactly a year ago: 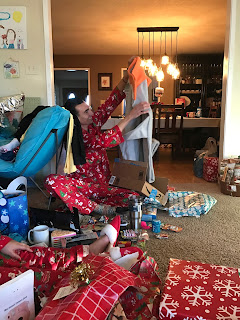 and santa brought him a pretty fun present, too. 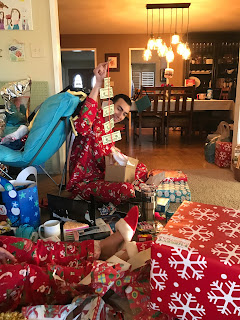 the old lady was having a ball going through her stuff, too.  she found clothes and make-up and a fun glitter case for her camera, and then she opened a gift from santa that made her very, very happy - a pair of black velvet pumas designed by rihanna that she'd been drooling over for months. 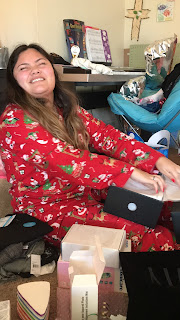 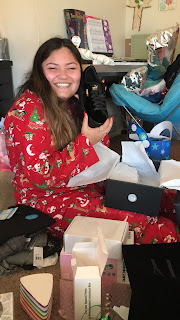 and because i love to torture her, i'd wrapped her big gift (an iPhone 7 plus) in approximately 8 layers of wrapping paper.


the aftermath.  it looked like christmas vomited all over my floor. 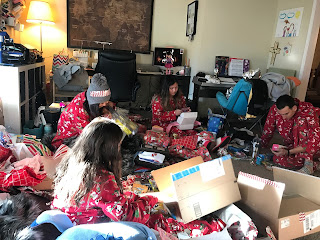 i made everyone gather around for a group photo (the one i'd tried to take in front of the tree came out really fuzzy). 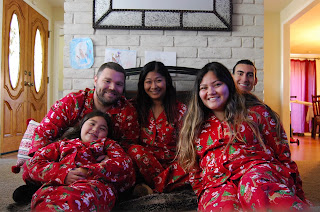 i even got this one: 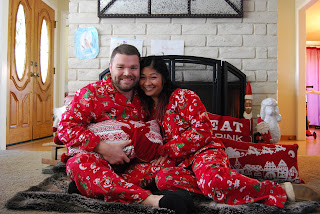 after enjoying our usual christmas breakfast casserole, we collapsed onto the couch and fell back asleep.  the bean played with all her new toys and the old lady and her special friend got themselves ready for a day driving around to see his family.  a little while later we found ourselves watching the spartan world championship race on tv, which motivated me to finally get up off my ass and head out for my annual christmas day 3-mile run. 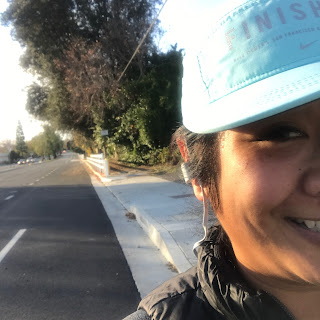 when i got home, i took a nice hot shower and busted out one of my presents that had been high on my wish list this year.  i have several pairs of ugg boots that are super duper old, and this set of new insoles - only $15! - made them feel brand new again. 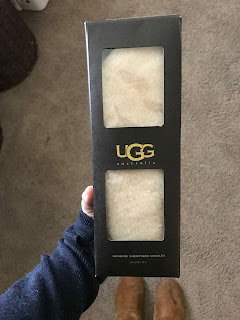 with just the three of us home that evening, i hadn't planned on anything special for dinner.  we had a lasagna that the hub had picked up at the italian market, but since we'd had meatball sandwiches for lunch it didn't sound good anymore.  and so we ended up with grilled cheese and bacon sandwiches that we ate while watching "home alone."  the bean said it was kind of a weird christmas dinner, but it wasn't a complaint.

the kids got home not long after that, and they plopped down on the couch to watch another movie with us.  we all fell asleep there, and eventually made our way to our rooms.  it was one of the most laid-back, relaxing, enjoyable holidays ever.

Email ThisBlogThis!Share to TwitterShare to FacebookShare to Pinterest
Labels: merry christmas to all, presents are fun, running my ass off