so when i was meeting up with my friend who asked me to make those snowman pops a couple of weeks ago, she came up with an idea that she thought i might be interested in tackling.  her daughter is in an all-star competition cheer squad, and she'd packed up last year's uniform to see if i could come up with a way to create a christmas stocking out of it.  after asking her about five times if she was completely sure she didn't want to keep it intact or that it wasn't going to be used again, i decided to go for it.

although her daughter is teeny-tiny (i think the uniform may have been a size 5/6?), there were quite a few pieces there for me to use - a pair of full-length warm-up pants, some booty shorts, a bodysuit, and a crop top with the cheer squad's logo and name all blinged out on it.  i figured that the first step had to be deconstructing each piece to see how much fabric i had to play with, and so i started with the pants. 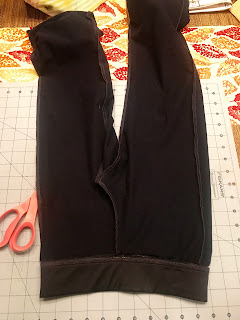 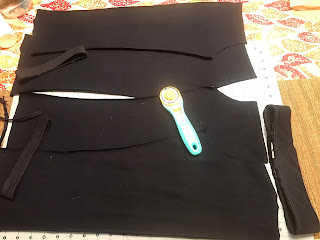 working with one-of-a-kind items like this always makes me super nervous.  i mean, you only get one shot to get it right!  and i had to be extra careful with how i laid everything out because i only had so much material to work with, so there was pretty much no margin for error.  oh, the pressure!

after cutting the seams out of the pants, the shorts, and the bodysuit, i took a deep breath and started chopping up the top.  look at this thing!  here's the front: 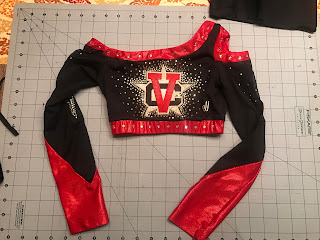 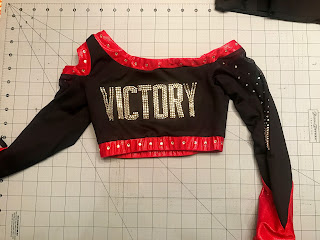 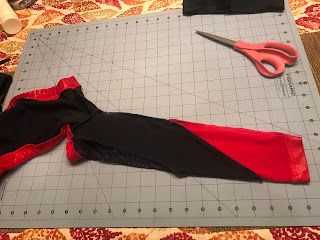 when i was done, i had these pieces plus those pants: 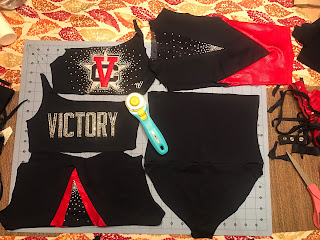 that bodysuit ended up being the biggest section that allowed me enough space to cut out the foot part of the stocking. 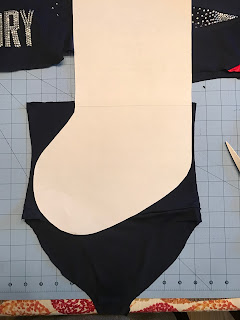 the widest part of the pants served as the top: 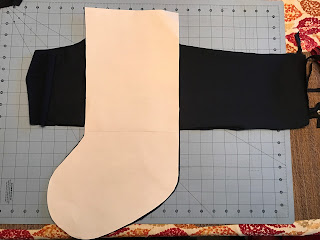 and then i decided to use this sparkly part of the top to break up all that solid navy blue. 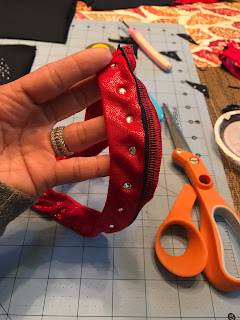 i wanted to use the "victory" in rhinestones as an accent for the bottom of the stocking, so it would look like this: 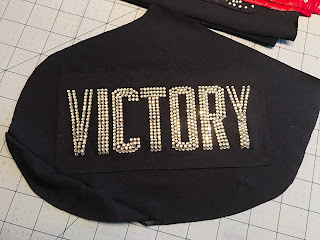 after a little bit of debate, i decided that the best way to do it was to sew it on using a zigzag stitch at the edges.  because the fabric is a little slippery and stretchy, i used a little hem tape to stabilize it a little before sewing. 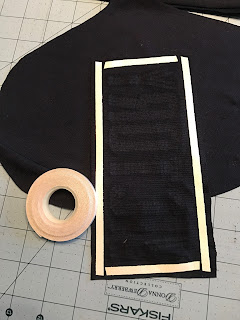 from here the process got a little intense.  those rhinestones were a bitch to sew around, and i was worried i'd break a needle or screw it up in some way.  each side of the stocking consisted of four separate pieces plus the top cuff, and i had to take it really slow.  i had to sew them all together to form my pattern pieces, and then before i could finish it off i still had to embroider her name on the cuff piece.  after doing a test run on a scrap piece, i hit the button on my machine and let 'er go. 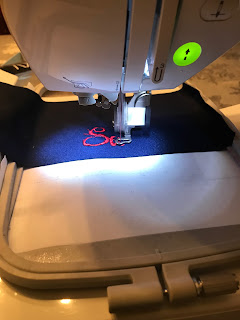 it ended up a little closer to the bottom than i would have liked, but it worked out okay.  i used some red knit fabric for the lining (which won't be seen anyway, but still) and hand sewed the hair tie part of the cheer bow to the top corner so it could be used as the hook.  i had to trim the bottoms of the bow a little so that they didn't cover up the name, and then i was done. 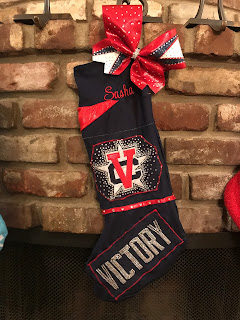 it's far from perfect, and you can totally see what i mean about the embroidery being too close to the bottom edge of the cuff.  but i sent her that picture and she seemed to be pretty excited over it, so that's all that matters.  i'm pretty proud of how it turned out anyway, and hey - i can add "custom christmas stocking" to my list of things i've done now.