afternoon with the pops

a friend of mine hit me up to do some treats for her daughter's birthday party...but with a twist.  yeah, she wanted some sugar cookies, but the plan was for the kids to decorate them using edible ink markers.  and she wanted a combination of my usual sugar cookies plus some chocolate ones - something i've not done before.  and instead of my usual corn syrup glaze frosting, i decided to mix up some regular royal icing so that it would dry hard enough for the markers to work. 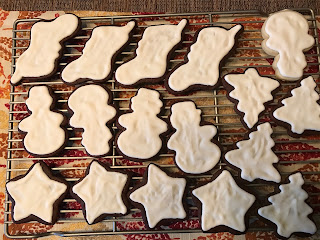 along with those, she asked me if i could do some marshmallow snowman pops like some she'd seen online somewhere.  and instead of on lollipop sticks, the pops were on paper straws with a purple chevron print.  now, i haven't taken on anything that required dipping into chocolate (like cake pops) in a really long time because it's not my favorite thing to do.  but i figured it would be fun to give it a shot, and so after a trip to my favorite candy supply shop to pick up all the required stuff, i got to work.  first off, i got all of the marshmallows placed on the straws - 32 pops total (plus one extra for practice). 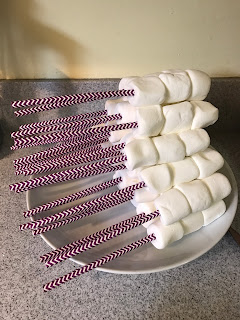 i wasn't at all sure how much white chocolate i'd need for these things - each one consisted of three full-sized marshmallows.  so i splurged and bought the giant 5-lb bag of wafers and measured out a pound so that i could keep track of how much i was using. 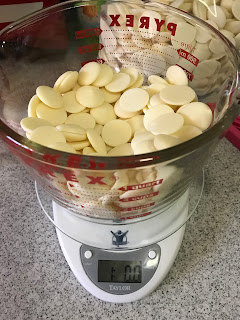 the chocolate went into the microwave for a minute, and then after a quick stir i put it back in for another 30 seconds.  it took a couple of rounds of that before it was all melted and smooth. 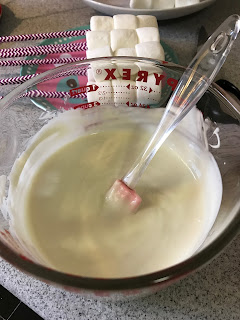 i poured it into a tall, skinny cup to make it easy to cover all three marshmallows.  the first try was a success - dip, tap to remove excess chocolate, and then place onto a makeshift stand i created using floral foam and lollipop sticks. 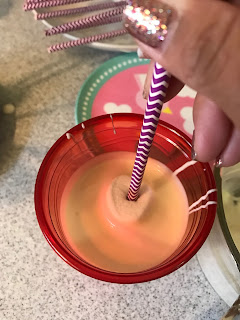 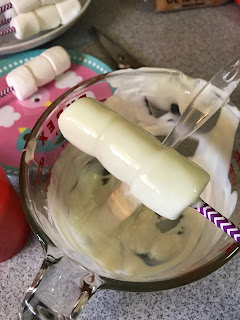 except that after the first four, i misjudged the distribution of weight on my stand and the first five pops toppled right over and fell onto the counter.  there was white chocolate everywhere, including all over my sleeve.  i was so mad. 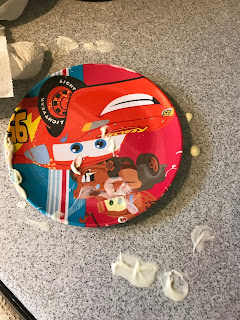 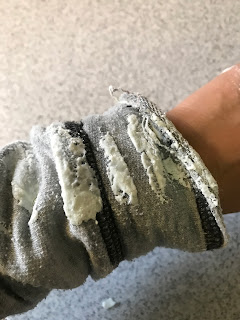 luckily, all it took was a quick re-dip to fix them and then i continued on until i was done with all of them.  i set them aside and moved right into the next step - melting candy in the other colors i needed to add the decorations.  now, since i didn't want to buy entire bags of orange, black and purple candy wafers i opted for the mixed bag and hoped that i'd have enough of each color for what i needed. 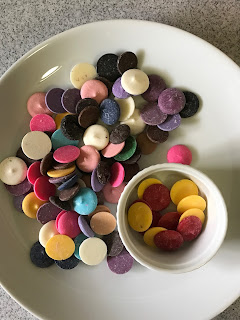 i mixed some of those red and yellow wafers, adding a few white and beige ones here and there until i had the color i was looking for.  of course, as soon as i was done and went into the cupboard looking for something, i came across a half-full bag of orange.  i was pretty happy to see that i'd managed to mix the colors almost perfectly. 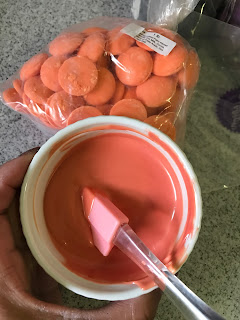 ...because of course, snowmen need orange carrot-shaped noses, don't they? 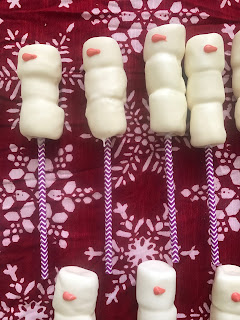 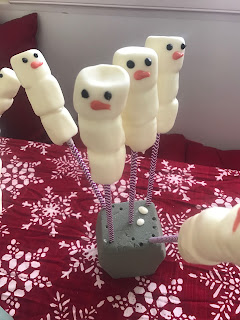 plus a mouth and little twig arms. 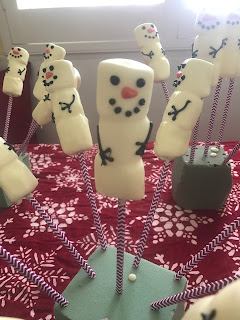 the final touch:  a purple scarf to match the straw. 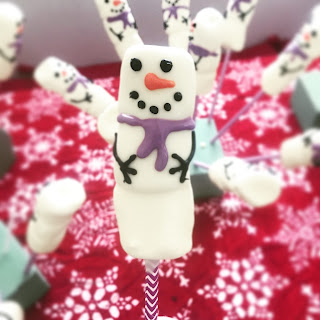 after they were completely dry, i wrapped each one in clear bags and tied them with purple ribbons.  my friend was pretty excited when she saw them, and now i want to make some more because they sound really tasty.  not to mention, i kinda want to dip all the things now.

stay tuned for some fun chocolate pretzel rods and maybe a re-do of some good ol' oreo truffles.  mmmmmm.
at December 09, 2016