to celebrate christmas, the two third grade classes decided to have a joint party to bring everyone together and combine resources and activities.  along with the other room moms and the teachers, we settled on games and activities and asked all of our parents to sign up to bring the needed supplies.  there were to be four stations - cookie decorating, photo booth with a picture frame craft, and then two games.  after that was a fun book exchange game and snacks, and that was the plan.

i'd seen a set of photo booth props that looked like fun, but as i looked at them i realized i could easily make them myself using colored cardstock that i already had and cutting out the shapes with my die cutter.  it didn't take very long before i had these all done: 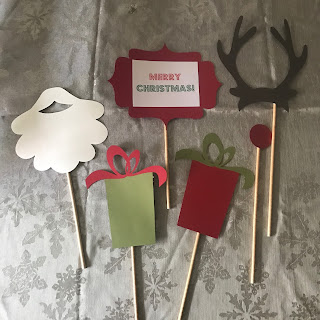 the kids were broken up into several groups and sent to the various stations for about 15 minutes before rotating to the next one.  when the bean's group got to the photo booth, i managed to squeeze in to get this: 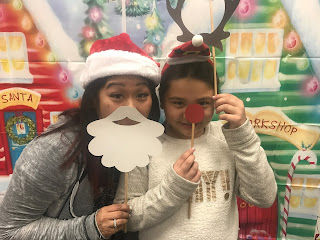 cookie decorating isn't a novelty to her anymore, but she still had fun slathering frosting onto a sugar cone and adding sprinkles and other decorations to make a "christmas tree." 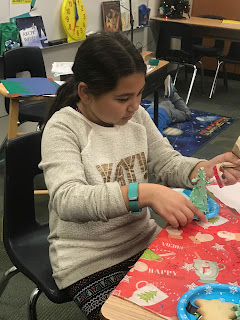 while she opted out of the pie face game (because she's like her mother and doesn't really see the fun in having her face smacked with a mound of whipped cream), she was happy to be the model for the "make a snowman out of toilet paper" game. 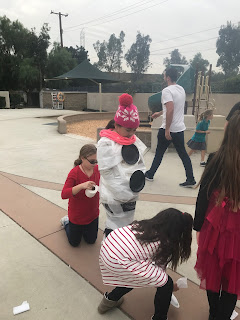 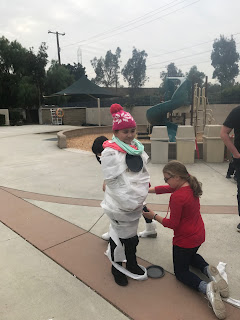 and then a few hours later, after her piano lesson and math homework, the old lady joined us and hopped into the car to head down to the happiest place on earth for our last trip of 2016.  it was our last chance to see santa, since our passes are blocked out for the two weeks of christmas and new years.  end although it was a school night, she only had to be at school for half of the day.  i figured she could just go home and take a nap if she was still tired.

when we got there, we found that the new security checkpoints were up and running.  before, you would exit the parking structure and get onto a tram before going through security.  this also meant that you'd have to go through the checkpoint if you wanted to go between the parks and the downtown disney area.  now, you just do it once before you even enter the resort: 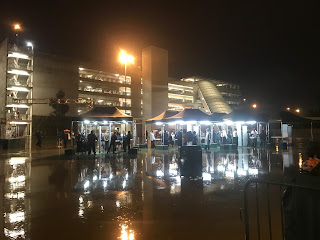 it was really easy, and seemed to make the lines for the tram easier to get through.  and walking from the tram stop to the turnstiles was easy breezy.  once we entered california adventure, we made a beeline for the redwood creek challenge area, where the big guy himself was waiting to greet all the kids (and kids at heart). 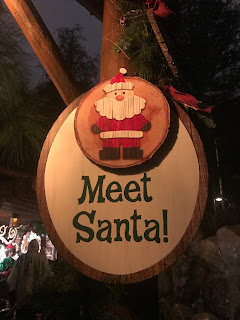 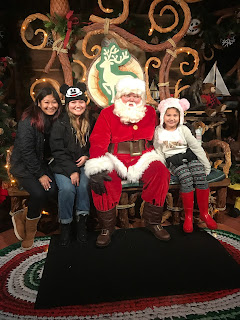 the "santa's nice list" was sitting out in the rain, uncovered and getting soggier by the minute.  she stopped to add her name to it anyway. 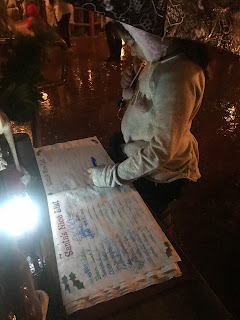 the big ol' bear at the river rapids ride was all dressed up for the holiday. 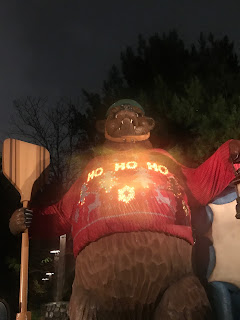 we'd headed down knowing that it would likely be crowded despite the weather, even on a thursday, because the holidays always bring a ton of people to disneyland.  and so we were prepared to just see santa and have dinner before heading back home.  fried chicken and pot roast sounded pretty delicious, and so we headed over to the disneyland side. 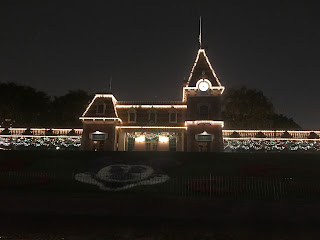 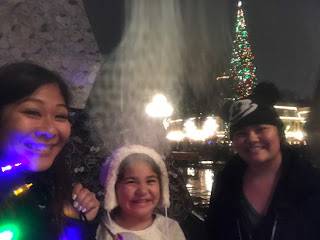 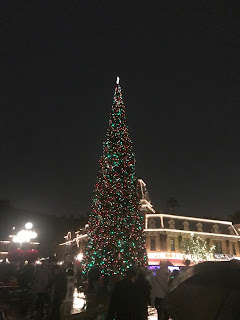 this is the bean's most favorite spot in the whole resort for dinner. 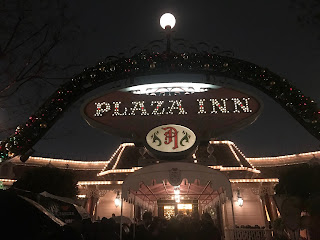 we took our time and enjoyed our meal while doing some peoplewatching, and after grabbing a sweet at the candy parlor on main street, we took one last selfie with the castle in the background. 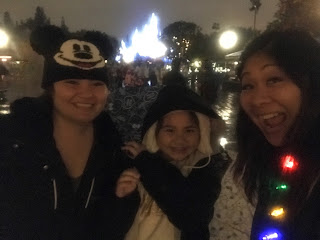 Email ThisBlogThis!Share to TwitterShare to FacebookShare to Pinterest
Labels: disneyland, santa pic, the bean is a party animal