the workshop continues to grow

i had a friend contact me awhile ago to ask if i could do some cookies for her company's holiday party.  she was looking to have their logo on the cookie somehow, and of course, i'm like "sure!" i explained that i probably wasn't going to attempt to freehand the logo using frosting, but instead would have some edible images printed up and use those to decorate the cookies.  she thought was a mighty fine idea, and i penciled the date on my calendar and waited for further instructions.

turns out that she ended up needing a total of 260 cookies - half of them with the logo and the other half in some sort of wintery/holidayish-but-not-christmas design.  phew.  it was a pretty tall order, but i knew i could handle it if i took it slow and didn't let myself stress out too hard over getting them all done.

and then i got to thinking...each sheet can hold about a dozen edible images.  and each one of those sheets is $10.  after doing a little mathing (yes, i turned "math" into a verb), i realized that those logos were going to add up to quite a pretty penny.  not to mention, i'd also been asked by another friend to do some cookies with her company's logo on them too.  do you see where this is going?

so, yeah...i turned to the google and started doing a little research on edible ink printers.  i've looked into this before, but hadn't pursued it much further because i really didn't have an urgent need for it.  and even after i perused the different options and pricing, i second-guessed myself and wondered if i really wanted to deal with yet another piece of equipment and take the time to figure out how to make it work and blah blah blah.  in the end - well... 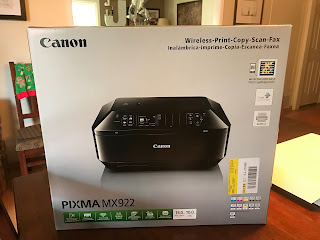 guys...this thing is humongous.  it's about twice the size of my regular printer.  yikes.  and yet i was excited at the idea of being able to produce my own edible images whenever i want them.  see?  one stop shop right here, people.  i can do it all! 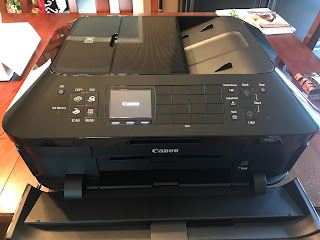 once it was powered up, it was time to insert the edible ink cartridges.  they look just like the ones that came with the printer, only the ink is FDA-approved for consumption. 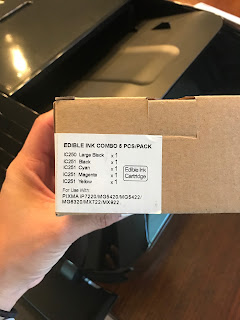 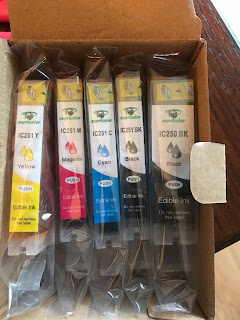 the cartridges click into place one by one, and a little light goes on once they're properly installed. 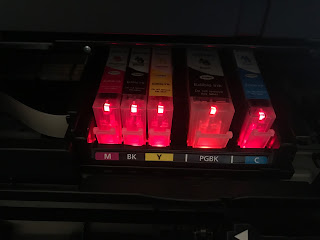 next, the printer does some aligning and adjusting and testing. 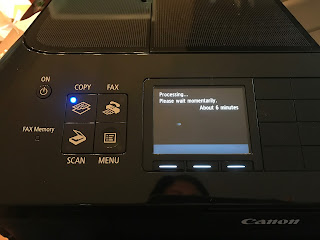 a couple of minutes later, disaster struck.  the screen flashed an angry red with some sort of error code that said that something was stuck, or the ink cartridges weren't correctly installed, or something.  i opened the front door of the printer to see what was wrong and the cartridges were stuck on one side. i couldn't even see them or figure out how to get them back out.  i opened all of the doors all around the damn thing, looking for jammed paper or some other way to access the printhead, and...nothing.  i started to panic a little, tried looking through the troubleshooting section of the manual, turned it on and off a few times.  then i decided to try calling customer service, who while very friendly, was pretty much no help whatsoever.  finally i managed to stick my hand inside and pry that printhead out so that i could finally see what was wrong.  one of the cartridges had popped out of place, and when i snapped it back in and closed all the doors, the self testing resumed and finally resulted in a test page. 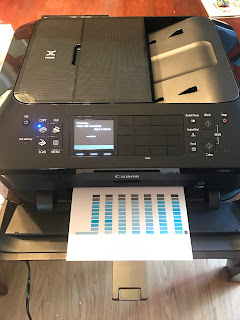 yay!  i was so happy to get through that without having to return the thing to best buy.  not to mention, i only had the one set of edible ink cartridges and didn't have time to have to order another one.  all i needed to do then was connect it to the wifi so that i could print wirelessly.

well, guess what?  i couldn't get that shit to work either.  it had to be right next to the router to connect, and then even after i was able to get my computer to recognize it as a network printer, every time i tried to send a print job it would never go through.  i was so frustrated by this point, i was ready to just chuck it all out the window and cough up the $10 per sheet.

BUT NO.  i was determined.  i finally decided that i didn't care about printing wirelessly and went through the entire house looking for a cord to just hardwire the damn thing to my computer.  of course, there was no such cable to be found anywhere.  and so off to best buy i went.  except that the stupid thing cost $30.  YARG.  i couldn't bring myself to do it and went across the parking lot to staples instead, where i managed to find one for a lot less cash.  i grabbed some lunch on the way home and headed straight back to the office to get it connected and get this show on the road.

wonder of wonders, it finally worked: 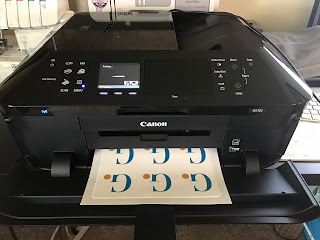 the graphic printed up so nice and clear, and as soon as i saw that first sheet come out all the frustration and irritation and stress flew out the window and was replaced first with a huge sense of relief.  and then as i finished printing the rest of the sheets i needed i was pretty stinking stoked over my new toy.

once all of the cookies were rolled out and baked, i decided to try a new trick i'd read about before but hadn't had the chance to test out.  normally, i'd make the frosting and put it into a decorating bag to "flood" the surface of each cookie for the background.  but i'd seen some blog posts where they put the frosting into a shallow container with a lollipop stick attached to it and simply dipped the cookie, scraping the excess off with the stick.  and so i got my supplies ready: 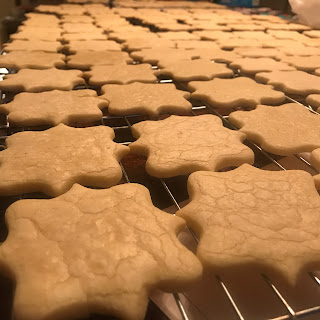 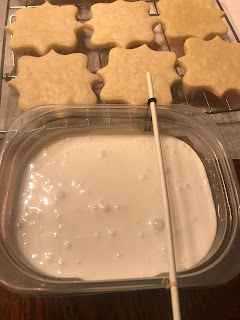 and after a couple of tries, i got the hang of it and found that it worked really well - so much so that i was done in about half the time it normally would have taken me.  as i dipped each cookie i placed the logo on top and set it aside to dry.  the last step was to outline each cookie in a gold-colored frosting, which also went a lot faster than i'd anticipated.

much to the annoyance of the old lady, i spent a good bit of time bellowing "WHAT UP, G!" as i worked on those.  oh well.  i couldn't help it.  plus, i was super amused at myself the whole time.  heh.

as for that second cookie, we decided to go with a very neutral, non-holiday-specific snowflake. 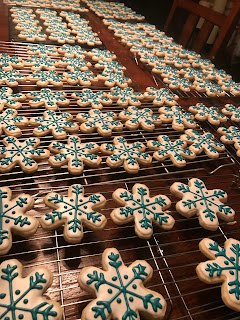 once they were all dry, i placed one of each cookie into bags and tied them with teal colored ribbons.  happily, she was super thrilled with the results and now i can't wait to hear all about how they went over at the party.

and now i just want to make cookies with people's pictures on them.  oh, so many possibilities...
at December 16, 2016