a dollar here, a dollar there

at gymnastics this weekend, one of the moms walked in with what looked like a reusable shopping bag adorned with my very favorite character - hello kitty.  i gasped out loud, pointed, and breathed "wherrrrrrrrre did you get thaaaaaaaaaat?"

anyway, she grinned at my excitement and said she'd picked it up at our local target store, buried in the "one spot" section.  oh, how i love the dollar bins at target.  she warned me that they were stuck under a pile of other stuff, but had only picked it up a few days before.  so obviously, we know where i was dragging the bean as soon as class was over.

sadly, the bags were nowhere to be found.  i picked through every single one of those bins, finding only some sad-looking dr. seuss bags.  we walked around the whole store, hoping for a miracle, but it wasn't to be.  i finally gave up (but still managed to leave with a cartful of crap) and left the store dejectedly.

there's another tar-jay not far from the house, and i spent a few minutes debating driving out to see if i could find the elusive HK bags there.  after a quick convo with the bean, who was fully in favor of the extra trip, i decided to go for it.  the hub was off doing other stuff anyway, and i knew he wouldn't care if we weren't home right away.

as i pulled into the parking lot, i spied some kind of hullaballoo going on at the my gym (a kids' fitness center) across the way.  there was a bounce house and a pony ride, and i figured we'd go and check it out after our target run.

i strode into the store, with the bean riding piggyback, headed right for the one spot, and literally squealed when i found this: 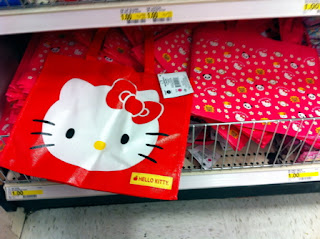 i was so excited, it was ridiculous.  and that red one with the big HK face on it?  it came in pink, too.  i scooped up six of each style, or so i thought.  but as the cashier counted them out, it turns out i'd gotten twenty of them.  eek.  but i knew they'd make some great gifts, and at $1 apiece, well, hey.

as we headed back to the my gym, i dropped the bags off in the trunk and pointed out the fun to the bean.  "pony ride!" she squealed, and i knew it would be a good time. 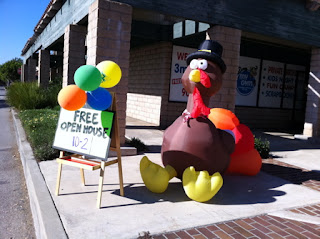 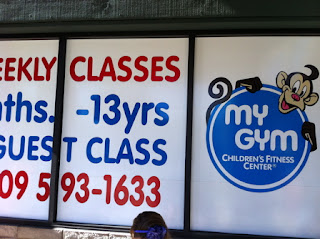 we signed in and accepted a raffle ticket to enter into one of the drawings inside.  but first, we stopped and played a couple of games for a buck.  our spending seemed to be in a pattern that morning.  the bean bombed at the first game, knocking down zero bowling pins: 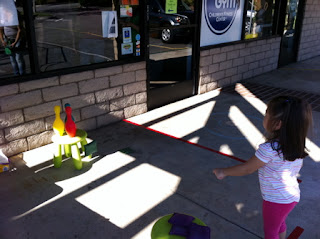 but the second game, tossing a bean bag to a target drawn on the ground with sidewalk chalk, was easier for her.  she managed to hit the target on the second try and was excited to win a prize - a little pink squirt gun. 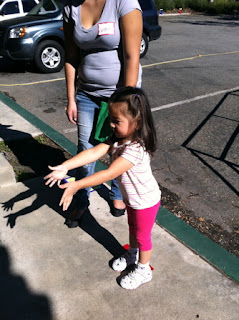 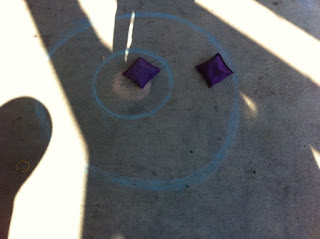 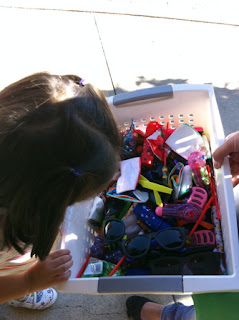 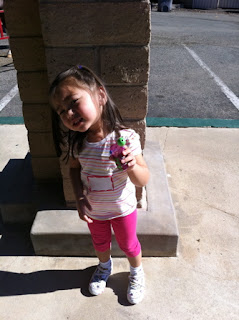 inside, she perused the prizes for the raffle before dropping her ticket into the bin for a ball pit.  as if she didn't already have a perfectly good one at home. 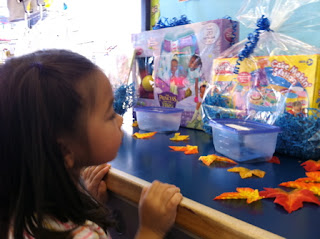 she had a ball playing on all of their equipment inside. 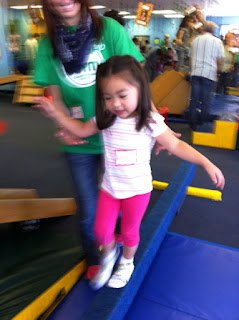 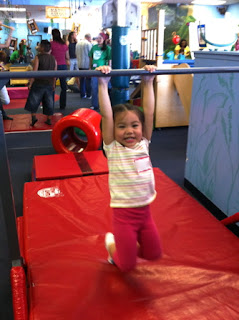 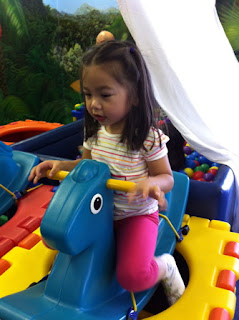 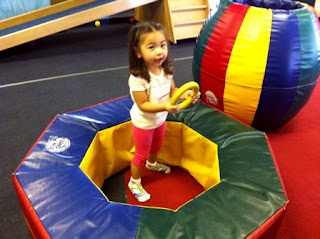 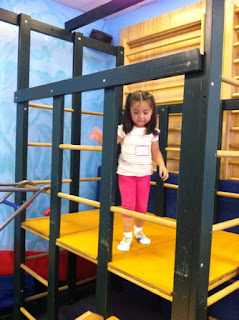 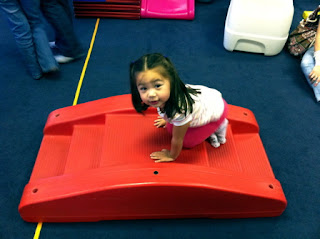 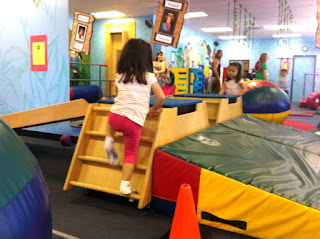 but outside, the ponies awaited.  i forked over the $4 for a ticket, and she was stoked as she rode in circles.  i always feel bad for those horses, but man, did she have a big ass smile on her face. 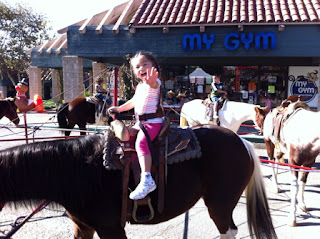 for another $3, we got to go into the petting zoo.  more animals to feel sorry for, but again, the bean loved being near them and stroking their fur.  or feathers, however the case may be. 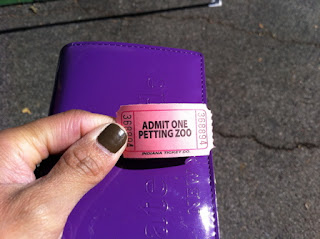 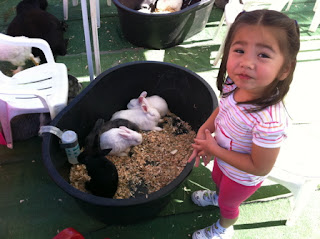 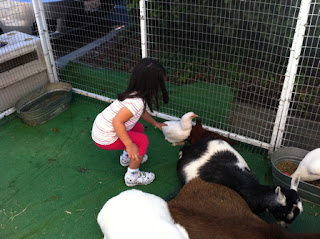 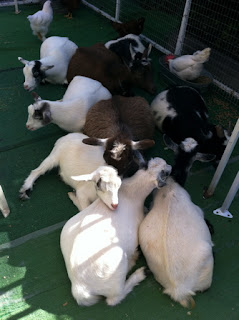 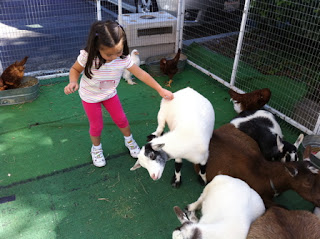 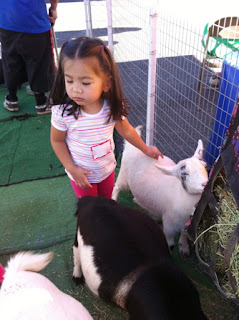 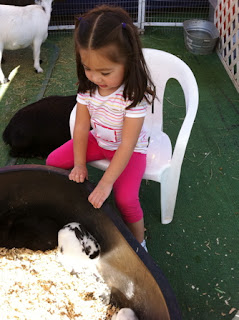 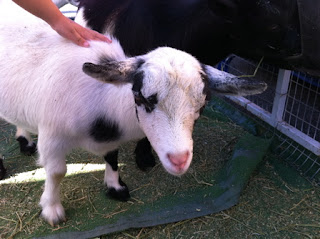 we washed our hands at the station right outside the gates (after i figured out how to turn the damn water on). 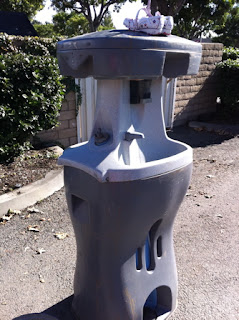 and then for another dollar, she jumped around in the mostly-empty bounce house.  man, they sure knew how to rope a parent into dropping cash. 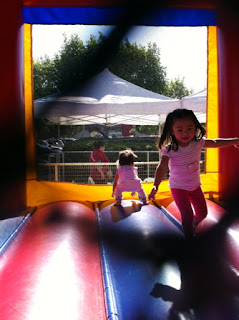 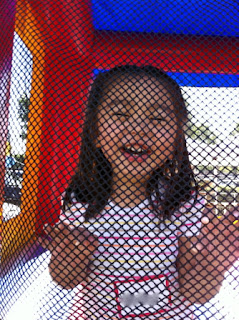 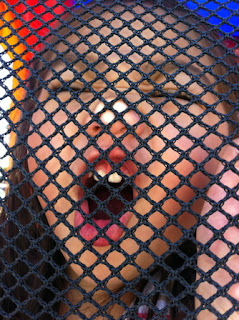 Email ThisBlogThis!Share to TwitterShare to FacebookShare to Pinterest
Labels: nablopomo, the bean is a party animal