guilty feet have got no rhythm

i am in deep mourning for someone i held very dear to my heart.  someone i'd really connected with, admired, loved.

i never got to meet her in person, though.  and i'll always regret that.  she died last week after a ridiculously short battle with stomach cancer - diagnosed only this june.  and a precious five months later, she's gone.  i cannot believe it.  she left behind a wonderful husband, a doting father, countless other family members, and a big ol' group of invisible friends - like me - who loved her.

see, when the hub and i were planning our wedding, i spent a lot of my time on the mother of all wedding websites - the knot.  and while i didn't really utilize my local board much (since we were getting married in hawaii), i hung out on the national message boards.  a lot.  the one i loved the most was called "wedding woes."  at first, i lurked and read the posts and got to know the girls who were regulars on the board.  and then i decided to just jump in and play.

they were all so friendly, especially when they realized i was normal - at least, according to WW standards.  heh.  and while i had a blast chatting with everyone (all day long, every day that i was at work, heh), there was one girl in particular who i gravitated towards.  she went by the username "cinnamonspark," and she was just so witty, clever (i learned all about being a snarky bitch from this girl), and hilarious that i loved her instantly.  we really clicked, and with every day that went by, i felt as close to her as any "real life" friend would. we had a lot in common, and her wedding date was even on my birthday that year.

we all spent months chatting every single day about everything from minute wedding details to the most fantastically insane stories about her MIL-to-be to whatever was happening in the world at that moment.  there was a great group of regulars on that board, and i was happy to be part of it.  although the board was created to vent about problems with wedding planning, our group pretty much took it over and it was just a place for us to go and spend downtime together.  sometimes newbies would come around and get really sensitive and angry when their posts were ignored, or if we fired off responses that they didn't want to hear.  i guess we were bullies in a way, but sometimes the girls would read our replies and come to realize that we were right.  and in most cases, those girls would end up joining the group.

when cinny's wedding date came, we all wished her well and waited anxiously for photos and stories from the big day.  she was one hell of a storyteller, and she didn't disappoint.  and i still remember my first post after our wedding, asking if she was around that day, and she came in and said "i'm here, you fabulous married whore!"  that's just how we were, and it was awesome.

but then, in march of 2006, the "powers that be" at the knot started cracking down on us. a lot of those whiny newbies (they were dubbed "beebee brides") had been complaining about us, as well as a few of the other boards with groups just like us.  the "knotzis," as we called them, started banning users left and right.  in a matter of a couple of days, roughly half of our board was gone.  some returned with new usernames after the 72-hour waiting period that it took to receive posting privileges, but a lot started up a new board on a different site.

WW was never the same after that.  with the loss of so many regulars, there was little action on the board.  i joined the spinoff board for a while, but lost interest as it really wasn't the same.  we tried to get cinny to join us, but she felt the same as i did.  instead, she just kept going back to WW and chatting with those who stayed, as well as newbies who rolled in.  i'd pop in now and then, but with the board so quiet, i'd finally turned to my local board to meet new "knotties," ones i might actually be able to meet and get to know.  i don't think i've ever told her this, but i felt the same way about weezermonkey as i did about cinny - i liked her instantly and knew we'd be great friends.

a few weeks ago, i received an e-mail from one of the girls on the old WW board that told me that my dear cinny was battling stomach cancer.  i just couldn't believe it.  not her - no way.  but apparently,  the chemotherapy wasn't working anymore and she was hoping to get in on some clinical trials to hopefully keep up the fight.  they were putting a photo book together of her WW friends, old and new, and i was excited to participate.

but i was always too damn busy to sit down and take a fucking picture.  there was always something i needed to do, a project to complete, a phone call to make.  i kept sending her love and prayers, and my stupid optimistic self just never thought that it would ever be too late.  i can't believe i was idiotic enough to think that it would just get better and she would be okay.  i am so incredibly racked with guilt that i didn't make the time to do this, even though, as it turns out, it wouldn't have gotten into her hands in time.  i can't believe how self-involved i've been, even knowing the hell she must've been going through.

and then yesterday morning, as i sat in traffic, i happened to check my facebook account (i know, i know) and noticed an e-mail from one of the WW girls.  when i saw the subject line, my heart sank.  because i just KNEW, the tears came immediately.  and through the blur, i saw the words i was dreading:  "hate to tell you...cinnamonspark...WonderW1fe...passed away."

the phone fell from my hand and as it sank in, the tears gave way to full-on crying.  i sobbed and sobbed, and i couldn't stop.  not her.  not that amazing, fabulous woman who was going to make such an awesome mom to some beautiful children.  and i didn't stop crying on and off, all day long.  it was hard as hell to smile for the customers at work, and i fought back tears the whole time.  and when the teen noticed that i was unusually quiet, i started crying again and had to work really hard to get the words out.

i realize how insane it sounds to feel that close to someone i'd never met.  i do.  but when you spend five days a week chatting with someone, you really get to know and care about them.  and it's actually really hard to find friends at this stage of life, i think.  the internet can not only find you a date (or a spouse, in many cases) - it can find you a whole group of women that you have tons in common with, who you never would've found otherwise.  i've made so many friends via the knot and the nest, and life has been so much fun with them in my life.

this girl had lived through a lotta shit - growing up with no mom, a tough childhood with a military dad, living overseas for a while, and still managing to emerge from it all as one hell of a smart, funny, beautiful woman who lived life to its fullest.  she and her husband seemed to be a match made in heaven, the perfect couple - and now he faces life without his "WonderW1fe" (the username she went by over the last couple of years).   obviously, i never met him, never said a single word to him, but man, how i wish i could give him a big ol' hug right now.  at least half of my tears have been shed for him, because she loved him so much and i know he's got to be reeling right now. 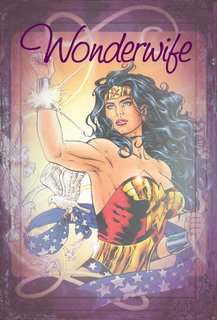 but i feel super lame.  as much as i admired and liked her, i hadn't "talked" to her in months.  granted, i haven't had much time to play online at all since i stopped working in an office, but still - i could've made a better effort to keep in touch.  i posted on twitter and facebook as soon as i heard the awful news, reminisced with other WW friends, accepted condolences from others.  and i feel like such a fraud, so fake, for it.  ugh.

i'm rambling, i know.  i'm sorry.  it's really effing hard to find the words i need to express how i'm feeling, and i'm doing an awful job of it.  it doesn't help that my thoughts are so jumbled and my emotions are just all over the place.  i guess, if nothing else, this inspires me to be a better friend.  to make sure i keep in touch with everyone i love, be more conscious about getting together, to tell them how much they all mean to me.  and to tell my current "invisible" friends - those of you who i've gotten to know, traded e-mails with, are facebook/twitter buddies with, but have never actually met or very rarely see - i love you and i'm happy that you're in my life.

rest in peace, dear friend.  i'm sorry i never got to tell you how i cherished our friendship.  i hope your close friends and family are dealing with your loss.  the world is less fun without you in it, but i sure am grateful for the time you spent in it.  i'll be wearing purple (the color for stomach cancer) tomorrow, the day of your memorial service, in your honor.  and i'm listening to wham! right now and thinking of you.

"careless whisper" will never be the same again.

edit:  i returned to WW last night after a long, long absence.  i wanted to be surrounded by people who had known and loved cinny as much as i did.  and i'm so glad i did - i found myself reminiscing and laughing as i read other knotties' memories of her. there were girls there who'd joined WW after a lot of us had left, and even more heartwarming was the return of an astonishing number of OG WWers like me.  i read posts from knotties i hadn't seen in ages, all back on the board as the word spread of our mutual loss.  there were a few who reposted some of her most fantastic stories, and links to some of her final posts before she got too sick to play.  it was fantastic to laugh all over again at a couple of her truly epic stories, and it really helped me to have people to grieve with.  and the most wonderful part for me was when a couple of them shared posts she'd written about me, long after i'd made my last appearance on the board.  it made me feel like maybe, just maybe, she'd felt the same way about me as i did about her.

i'd like to think she's up in heaven somewhere, reading our posts on a sparkly laptop and guffawing at the memories - just like we were.  man, i sure hope so.
at November 09, 2010