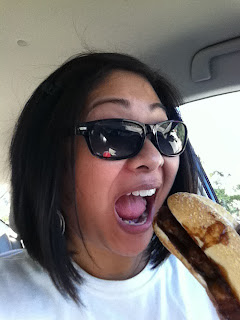 you know how much i love me some pressed pork at mcdonald's. hell, i've posted about it before.  and while it was only officially re-released on 11/1, my local mickey d's started serving it a full week prior. 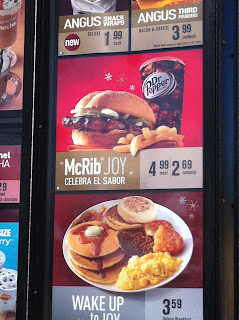 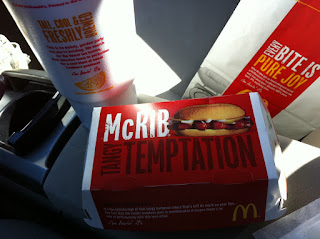 and so i might have had, oh, about three of them before the release.  heh.

what i don't get is why they wouldn't just put the damn thing on the regular menu already.  i mean, it's not like the mcrib doesn't have a gazillion fans, all of whom would likely frequent mcdonald's even more regularly if that yummy nugget on a bun was always available.  i mean, yeah, it's not exactly the healthiest thing in the world, but it IS mcdonald's.  as if their other sandwiches are any better for you.  and besides, it's pork!  pork is the other white meat!  it's what's for dinner!

wait, i think i'm getting my meat taglines mixed up.

whatever.  i think i'll go get a mcrib now, and wash it down with sweet tea.  which i actually started drinking at wendy's, until they stopped serving it.  how dumb is that?  wendy's is delicious too, but was even more so when you could get sweet tea there.  they do still serve regular iced tea, but it's not the same.  i hate having to put sugar in iced tea, because it takes forever to dissolve and you end up with a little mountain of sugar at the bottom of your glass.  and then you suck it up with a straw and find yourself with a mouthful of soggy tea-flavored sugar.  gross.

Email ThisBlogThis!Share to TwitterShare to FacebookShare to Pinterest
Labels: mcrib is back, nablopomo