friday night was the teen's high school's homecoming game.  i dropped her and rock-ell off to go and watch it with their friends, and then as i looked at my twitter feed, noticed that the hawaiian shave ice truck was going to be in nearby-ish el monte at 10:00 that night.

i texted the teen to let her know, and about two and a half seconds later received the predictable response:  "can you bring us after the game?  please?" heh.

the hub and MIL were gone for the night with a group from church building a house down in mexico for a needy family.  and so when i picked the girls up, i put the bean in her pajamas in anticipation of her falling asleep somewhere on the way.  sure enough, she dropped off right as we were pulling into the home depot parking lot - where the truck was scheduled to stop.  i'd meant to stop at an ATM to grab some cash, but after we pooled our funds, decided we had enough to buy our ices.

we were actually rather early and watched a couple of little kids running around the parking lot unsupervised, and talked trash the whole time.  yeah, we totally judged the lack of parental supervision of small children in a parking lot where cars were pulling in and out every ten seconds. 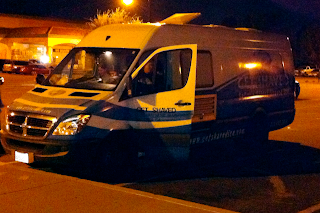 there was a good-sized crowd gathered around, but the teen and rock-ell were on top of it.  they were first in line, and not much later came back and handed me this little joyful cup: 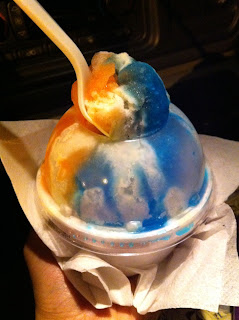 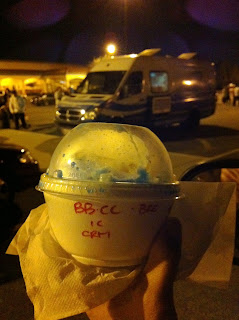 there was so much happy satisfaction in that car, between the three of us moaning in ecstasy over our delicious treat and the bean happily snoozing away after a long day.  seriously, it was kind of ridiculous.

but then, the unspeakable:  the kogi bbq truck pulled in.  i've been wanting to sample the korean/mexican fusion grub from that damn truck for months - and it was right there across the parking lot (with a line that was growing by the nanosecond).

and i had no cash.

the wave of bummer-ness that washed over me was even bigger than the satisfaction from the yummy shave ice.  i was so sad as i pulled out of the parking lot and headed home.  so close, and yet so far.