yeah, i've been in a baking mood lately.  i'm hosting book club next weekend, so i wanted to test out some recipes before i make a final decision as to what i want to make.

i'd been wanting to try making flavored macarons filled with something buttercream-y.  i'm not really a big fan of buttercream as i think it's a bit too sweet, but i found that the lemon curd and the salted caramel, while super duper delicious, made the shells kind of, uh...slippery.  like, the little sandwiches wouldn't hold their shape.  but the ones that had a buttercream type of filling seemed to stay together better, and since the shells aren't overly sweet anyway, i decided to give it a shot.

as i was browsing for ideas, i came upon this recipe for a chocolate macaron with a peanut butter cream cheese buttercream filling.  that's a whole lotta stuff i love, all wrapped up neatly in one little nugget of happiness.  i think i debated it for about three seconds before i decided that it was the perfect recipe to try.  not to mention, i already had all of the ingredients right there in my kitchen.

i'm feeling pretty comfortable with making these little things now, although i'd read on a few different blogs that cocoa does something funky to the shells and that it was tricky to work with.  but the macaron batter came together effortlessly, so either i'm just super awesome at it or those bloggers were doing something wrong.  i like to think it's the former vs. the latter.  heh.  and after learning my lesson the last time, i made sure to pipe these out without making the spiral motion and to leave lots of space in between each one. 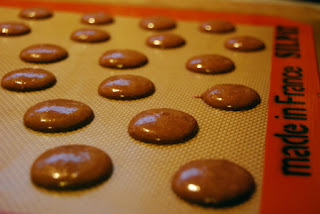 i piped out two baking sheets' worth of shells and then used the little trick i'd learned from tartelette - instead of leaving them to sit on the counter to form the "skin" on top, i baked them at a superlow temperature for 5 minutes.  you know me - i'm an impatient ass mofo.  instant gratification all the way for me.  then i took them out, upped the heat in the oven, and finished baking them for another 7 minutes.  they were almost perfect, except for one or two that cracked on top.  oh, well. 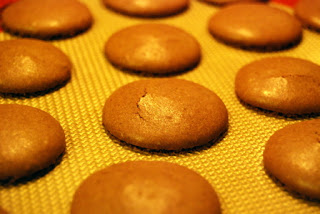 i still had a good amount of batter left, so i lowered the temperature again and moved the completed shells to a wire rack to cool.  i piped the rest of the batter out, checked the oven, and popped the pan in for that first 5 minutes.

except that i think that the oven was still super hot.  because as i waited for it to come back up to 375, that last batch of shells looked funky - see? 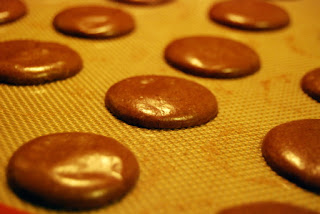 their "skin" got a little too done, and they started collapsing onto themselves.  ack.  next time, i'll just use parchment and pipe the batter out so that they can all be baked at 200 for the 5 minutes at the same time.  lesson learned.

but i still managed to achieve those cute little lacy "feet" at the bottoms.  and i still made pairs of similarly-sized sandwiches, despite my still not up-to-snuff piping skillz.  yay! 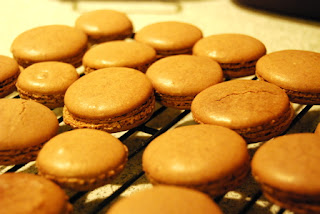 i got started on that peanut butter cream cheese buttercream, beating cream cheese and butter together with some sugar, and then whipping up some heavy cream to fold in.  dollops of peanut butter got thrown into the mix last, and it smelled almost as good as it tasted.  next time i do this, though, i'm cutting the recipe in half and adding a bit more peanut butter.  it made a shitload of filling, and it was very subtly flavored - a little too much so, i thought, but it was still really yummy.

i had to chill it for about an hour for it to firm up a bit, and then i scraped some of it into a decorating bag and snipped off the end to start filling my macarons. 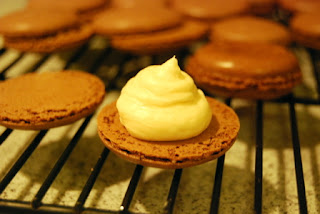 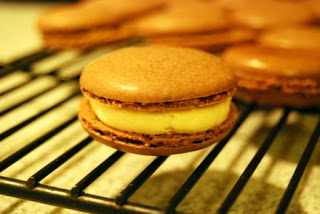 pretty, right?  and although the hub still isn't a fan, even he grudgingly admitted that they "weren't bad."  FIL, who's usually on the same page as the hub when it comes to creamy fillings in stuff, said he really liked them, as did MIL.  i handed one to brother wan the master chef too, and he seemed to enjoy it despite raising an eyebrow at my long-winded description of the filling.

i'd been to my candy supply store that day and picked up a couple of little window boxes to try out for size.  i'm thinking that making some macarons in holiday flavors (candy cane?  eggnog?  so many options!), boxing them in cute little containers and adding a festive ribbon would make for some fun christmas presents. 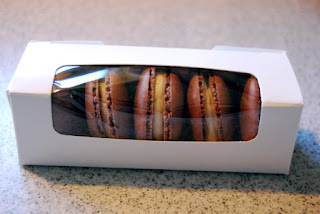 Email ThisBlogThis!Share to TwitterShare to FacebookShare to Pinterest
Labels: macarons are good, nablopomo