i was super excited to be hosting book club.  i love so much that we finally have a house of our very own, and one that's nice enough to have parties in.  and so i was totally the happy homemaker as i skipped around the house, getting set up for the girls. 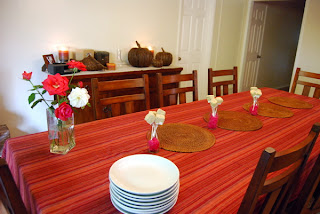 because i love to bake and serve sweets, i'd done a half batch of chocolate cupcakes and a bowl of buttercream frosting.  i portioned it out so i could make three different flavors:  chocolate, mint, and peanut butter.  i wanted to try and duplicate some of my favorite flavors from work, and even had the toppings for authentic recreations of their fleur de sel, chocobutter, and chocolate mint cupcakes. 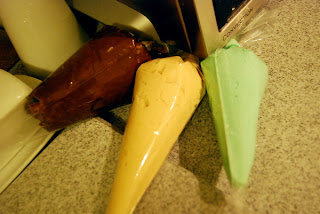 except that my little cakes didn't exactly turn out like dots, where they come out of the oven perfectly baked with beautiful round, puffed tops.  nope.  mine puffed up while baking, but as they cooled, they flopped and got all stuck around the tops of each cupcake.  eff, man. 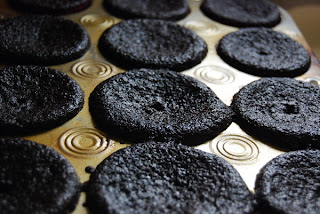 i'd had extra batter, so i busted out the liners i'd bought ages ago that are sturdy and don't require being placed into a cupcake pan.  those actually turned out okay, shape-wise. 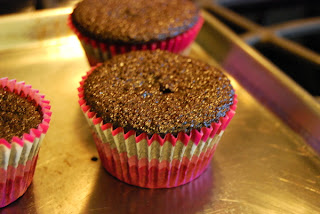 i've watched the girls at work quickly and expertly pipe out the frosting into perfect swirls, and hoped that i could do the same.  ha!  not even close.  check out my ghetto versions of dots cupcakes: 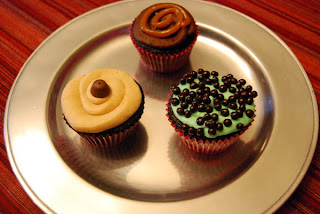 okay, maybe they don't look TOO bad, but i obviously cut too big of a hole in the bag when i attempted the caramel swirl.  next time, i'll know better.

by this time, the bean had finally gotten out of bed.  she likes to sit in our as-yet unfinished breakfast nook. 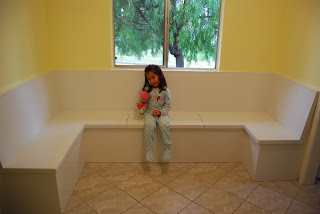 she, the teen, and the hub all got dressed and headed out to church while i got to have the house all to myself.  after getting myself ready, i ran out to the grocery store to pick up a few other things, and then came back to put my tater tot breakfast casserole in the oven.  oh, yes - i managed to find a way to incorporate my favorite dish into book club brunch!  sadly, i forgot to take pictures as from this point on, it was quite a blur as i raced to get everything into place.  oh, well.

i've had these in the fridge for a while, just waiting for the right time to bust 'em out.  and what better time than now? 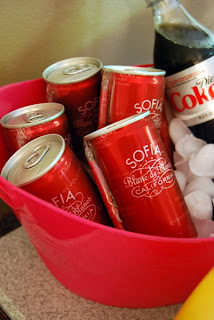 at first, i set up the desserts and drinks behind the dining table: 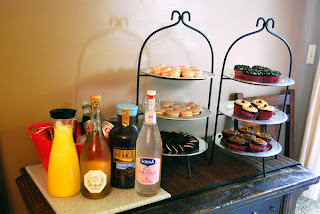 but i decided it looked too cluttered, so i moved it back into the kitchen. 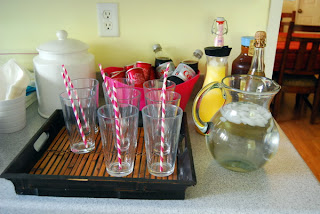 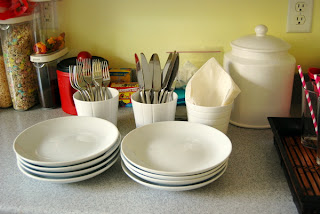 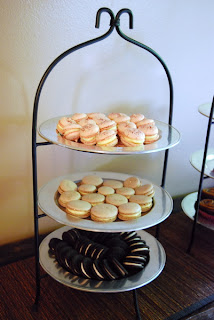 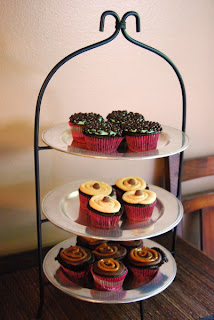 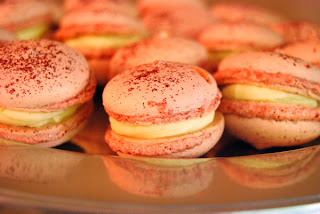 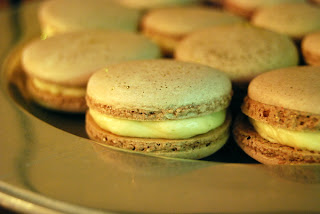 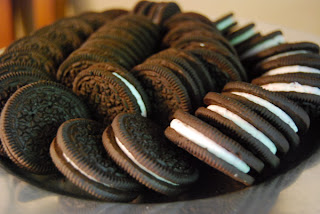 we were so amused at 10yt's amazement at the champagne in a can. 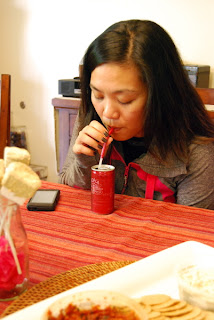 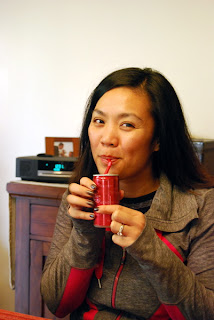 it was a lively group, and we had such a blast.  there was lots of yummy food, great conversation, just fun all around.  and my family got home just in time for me to snag the teen for her assistance in taking a group pic.  i was thinking i was gonna have to prop the camera up on one of the sweets trays and use the self-timer. 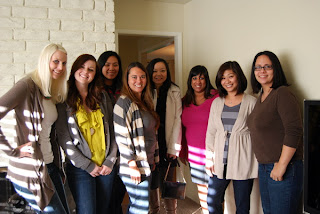 oh, and the book we read was one day, by david nicholls.  there's already a movie in the works based on it, and i'm thinking we'll have to go and see it as a group.  hey, any excuse for a GTG, you know.
at November 24, 2010

Email ThisBlogThis!Share to TwitterShare to FacebookShare to Pinterest
Labels: books are fun, nablopomo