okay, so the bean's checkup was a serious wakeup call for me.  like, i knew we needed to eat healthier and find a way to incorporate good stuff like fruits and veggies into our daily meals.  i've been really bad about that, because you know how i feel about fruit.  and my list of acceptable vegetables - well, let's just say it isn't particularly extensive.

when we took the teen out for birthday dinner at our favorite place, the bean's kids' meal came with a choice of steamed veggies, apple slices, or carrots and dip.  we thought maybe the latter might work out if we could get her to at least taste the dip.  i think the bean is the only child on the freaking planet who doesn't like dipping her food into sauces and dressing.  sadly, she didn't prove me wrong that night.

and to further cement my "mom of the year" status, i totally resorted to bribing her to eat at least one carrot.  we're talking baby carrots here - not even two inches long and definitely lacking in girth.  and the one i was dangling in front of her for eating said carrot?  a slice of the special strawberry birthday cake she and i had labored over that morning together. 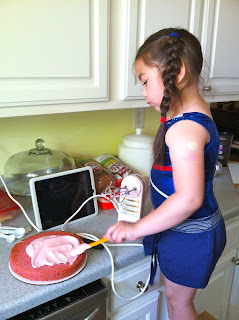 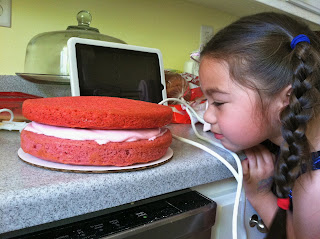 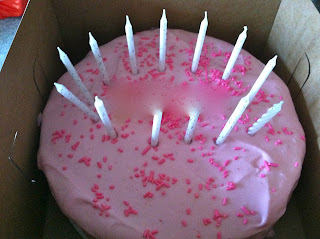 not very nice, i suppose, eh?  but you know what - i was desperate.  and as she bawled (yeah, this just keep getting better), she finally ate that damn carrot.  she bit it in half, let it sit in her mouth until we reminded her that chewing and swallowing would get it over with, and then wept even more as she ate the rest of it.

and then she threw it up.  at the table.  all over both of us.  fantastic.

while i really didn't want to have to resort to the jessica seinfeld approach, this little episode pretty much left me with no other options.  and so since that evening, i've been looking for ways to hide pureed fruits and vegetables in all of our meals.  actually, that cake we made included a full carton of fresh strawberries that took a whirl in my food processor.  that was the first attempt, and it was pretty successful.

like, i realized that the color of her favorite ice cream would be absolutely perfect for sneaking in some spinach. 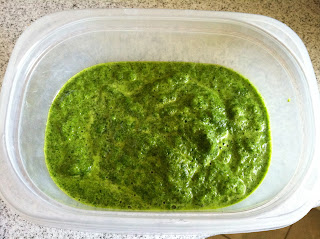 for her after-naptime treat that day, it was a mint chip milkshake. 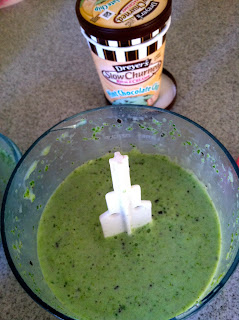 looks pretty legit, right?  and after topping it with a little squirt of nonfat whipped cream: 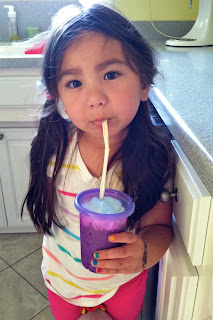 oh yes.  that's a full serving of spinach right thurr.  i was so proud of myself for being so darn clever.  she didn't suspect a thing, and gobbled the whole thing up as i beamed at her.

then i decided to try something else.  the deceptively delicious cookbook includes a recipe for chocolate chip cookies...with garbanzo beans hidden in the batter.  that's right.  i know it sounds all kinds of nasty, but all of the reviews i read assured me that the taste was undetectable even to the pickiest eaters.  but then i found a recipe for rocky road cookies that sounded even better.  i was quite torn between the two before i realized that the solution was obvious:  combine the two into a super delicious treat-slash-healthy snack. 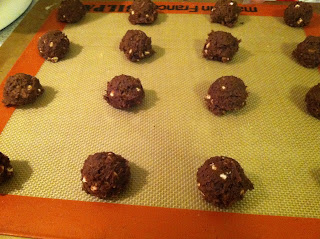 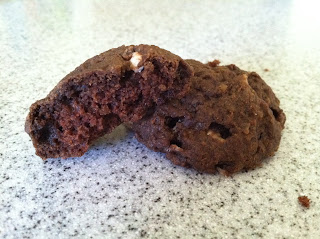 i gotta say, these really are fabulous.  the batter didn't spread much as it baked, and the result was a soft, cakey, chocolatey treat that the bean and the hub both enjoyed without suspecting that it contained anything out of the ordinary.  if you want to make a batch for yourself, here's what i did:

preheat your oven to 350 and line your baking sheets with parchment or silpats if you have them.

combine the flour, cocoa, baking soda and salt in a separate bowl.  cream the butter and sugars together until well combined.  add the egg whites and vanilla extract and mix until blended.  stir in the pureed garbanzo beans.

add the flour mixture slowly until combined.  stir in the chips, mallow bits, and almonds.  drop cookie dough by tablespoons about an inch apart and bake for 11 minutes.  you don't want to overbake these.

let the cookies cool on the sheet for a couple of minutes before moving to a rack to cool completely.  serve 'em up and watch the recipients dig in, totally clueless as to the healthy(ish) treat you've just given them.

neither the beans nor the splenda were noticeable at all, and in fact the bean proclaimed me "the best cookie baker EVER" as she devoured them.  so awesome.

i guess this isn't going to be too bad after all.  and i've got more ideas in my noggin to try and share.  thank god for my highish-end food processor...it's gonna get a whole lotta action from here on out.
at May 18, 2012