so it's no secret that i'm a dork when it comes to disneyland.  like, last time i checked my annual pass profile, my magic number (of visits) is 50.  FIFTY!  since september!  i don't know whether to be proud or embarrassed.

anyway, i happened to see a tweet posted by the disney parks blog that said to watch for a special announcement at 3:00 PST the next day.  so i did what any normal disney freak would do:  i set an alarm on my phone to remind me to hop online at about 2:58.  and when it went off, i opened the site in a separate window and went about my business - checking emails, twitter, the usual.  i refreshed the window about once a minute, and when the new post finally popped up announcing a special disney blog meet-up for a sneak peek at the brand-new cars land at california adventure, i sprang to action.  i fired off an email according to the instructions, hit "send," and hoped for the best.

within the hour, i had my answer:  i'd managed to squeeze my way in.  the email requested my information as well as for my plus-one, and since i'd already checked with the teen to ensure that she'd be able to go, i happily confirmed our attendance.  you know me - i love shit like this.  we were going to be among the first guests at this brand new land in the park, and the tour was going to be led by two of the imagineers who'd been instrumental in designing and creating it.  so. stinking. awesome.

of course, because cars land isn't going to open to the public for another couple of weeks, we were warned that phones/cameras/etc. would be checked in, and anyone who got busted taking pictures would get booted out of the tour and basically red-flagged for any future opportunities.  since i love to blog this kind of stuff, i was super bummed not to be able to have photographic evidence of this fabulousness, but hey - their game, their rules.  i'll play.

the teen had forgotten her annual pass at her dad's, but since you didn't have to be an annual passholder for this special tour anyway...no biggie.  we were going to be given a park pass for the day so we could play afterwards.  whee!

we dropped the bean off with the grandparents, who were thrilled to spend some quality time together.  the teen and i made our way down to anaheim, got decent parking, rode the tram to the entrance, went through security screening, and found our way to the check-in tent well before the 5:30 deadline.  doesn't she look stoked? 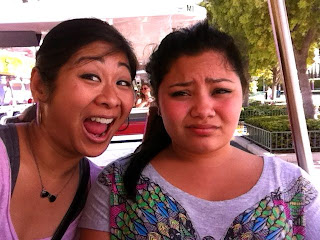 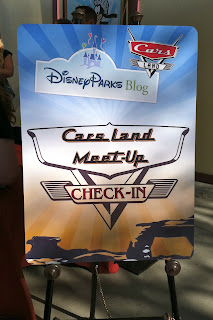 the cast members handling the check-in chuckled as i took this picture. 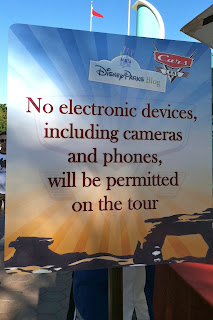 "it's part of my story," i said, and snapped away while i still could. 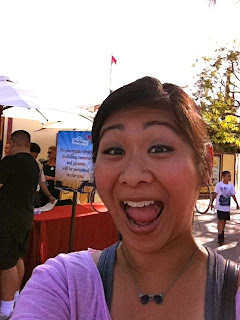 yay for another VIP-style wristband!  not to mention, it was our ticket to a special reserved section for that evening's 9:00 showing of "world of color." 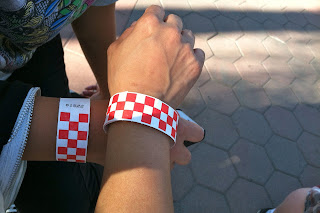 our one-day, one-park pass.  anybody else would have to pony up a whopping $87 for this thing, thanks to the newly-increased admission prices by the house of mouse. 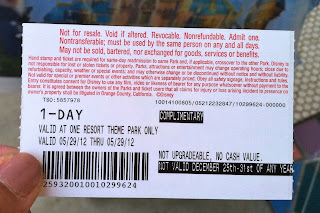 as we were led through the park by a rather intimidating bouncer-like cast member, we got our first look at the just-opened carthay circle restaurant. 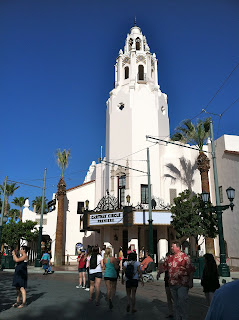 inside blue sky cellar, where renderings and models of cars land and buena vista street's remodeling has been located for the last year or so, we checked our phones in and were given headsets for the tour. 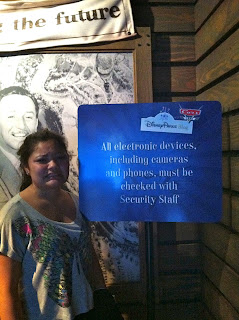 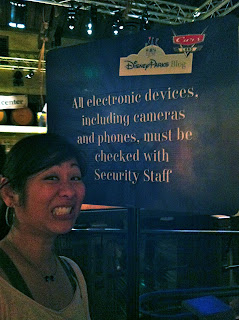 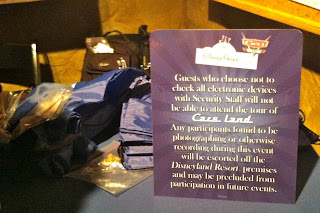 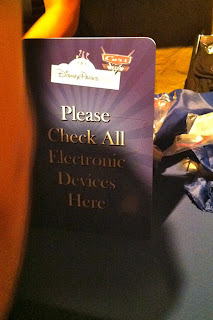 they were NOT messing around here.  even after you handed over your phone and allowed them to check your bag, they waved one of those metal detector wands over you to make sure you weren't hiding other electronics in your underwear.  not that i thought about that or anything.  so i have zero photos to share with you from here on out.

oh, except for this one - the teen and i were part of 66 (get it?) lucky disney fans on this tour.  do you see us?  it's the official disney parks blog group photo.  sweet.  and the blog post about our visit is up, too.  timely folks, those disney cast members. 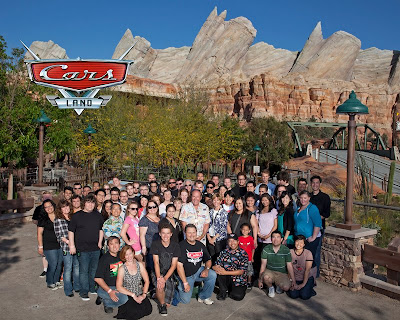 we were split into two groups and led off in opposite directions by our guides - imagineers kathy magnum and kevin rafferty, sr.  they were instrumental in the development of cars land, going on a road trip along route 66 to get inspiration and working with lots of other folks during the entire process.  we were in kathy's group, and she was really friendly and full of fun tidbits and interesting facts.

the teen and i were completely enchanted from the moment we stepped behind the food court area and wound our way through the gate into cars land.  not to mention, it was fun to watch the envious glances coming our way from other folks in the park who were watching us as we strode happily towards the new area.  tee hee!  it was just so exciting to be there, before anyone else, in the new section of the park that's sure to be a complete cluster when it's finally open.  we got to see the inside of all the buildings and check out the incredible detail that disney always puts into their creations.  even as workers were touching up paint, hanging fixtures, and working on final touches, we were walking through it all, basically watching it come together.  it was a phenomenal experience.

and as a special surprise, we got to test out one of the three new rides in cars land - mater's junkyard jamboree.  it's a super cute ride that kids of all ages will love - we sure did.  and we totally cracked up as we caught a glimpse of that unsmiling bouncer dude on the ride nearby...still completely stone-faced as he whirled around the track, alone in his car.  really, it was so funny.

the tour was over all too soon, although it's not a particularly huge "land."  we dejectedly trudged out through the gate and back up to blue sky cellar to reclaim our belongings, plus some fun swag.

i'm totally going to use this for every disneyland trip from now on (or, at least, until it falls apart): 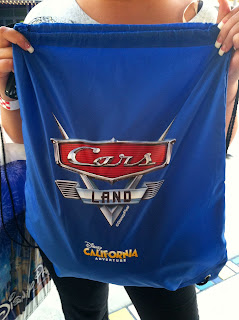 too bad i'm not a pin collector. 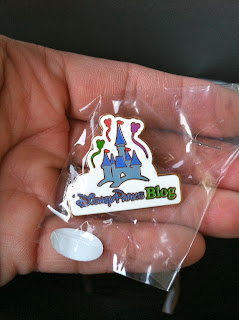 this thing was huge, and while it's cool and all, it was kind of a pain in the ass to drag it along as we decided what to do next. 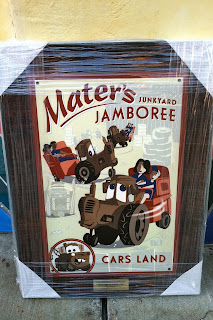 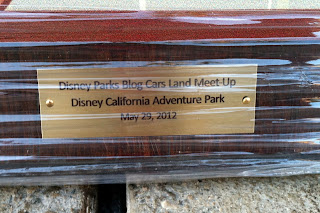 as we strolled along, i spotted something familiar.  "once upon a time" is one of my favorite shows from the '11-'12 tv season, so i stopped to check out the props and costumes on display. 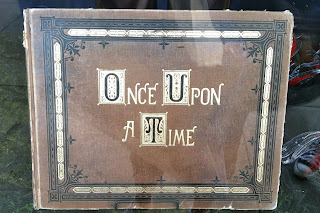 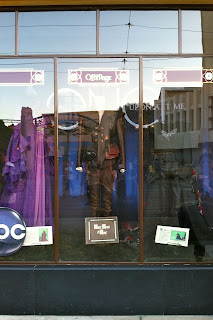 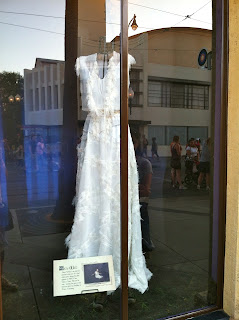 then my phone rang and our decision was quickly made for us - in all the excitement, i'd totally forgotten to take the car seat out for the hub to get the bean home from the grandparents'.  crap.  so we grabbed a drink, cast a forlorn glance at the not-too-long line for "tower of terror," and made our way back to the tram.  as we headed out onto ball road, i asked the teen to text the hub and let him know we were on our way.

and then she squealed.  really loudly.

didn't have to tell me twice.  i swung over into the left lane, caught the green, and headed back to the parking structure.  after pulling in, finding a spot, hopping on the tram, and getting through the ticket booth, we had just enough time to grab a snack and find our spot for "world of color."  pretty good view, wouldn't you say? 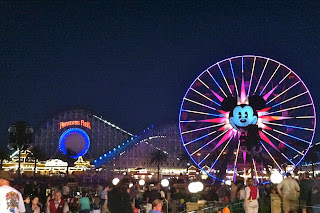 another funny moment came courtesy of mr. stone face at the entrance to our VIP viewing section, who was actually smiling as he chatted with his co-workers.  as the teen cringed and stayed right where she was, i headed over to take this. 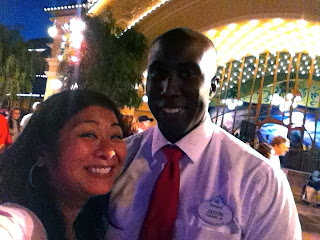 the bean hates "world of color."  granted, it does have some pretty scary parts to it, as most disney movies do.  so this was only our second time viewing the show, and we enjoyed it - especially with the sweet spot we were watching it from. 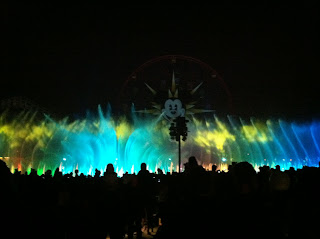 just before it ended, we snuck outta there and scurried through the crowds towards the hollywood backlot, where that "tower of terror" was waiting for us.  the posted wait time was 55 minutes, but with only 30 minutes till closing time, we knew it would only be about half that. 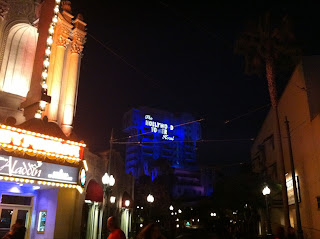 sure enough, we were on the ride and screaming our heads off within about 35 minutes. 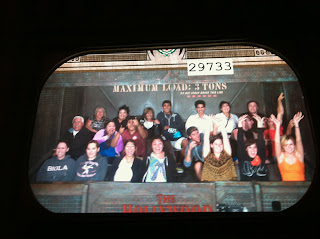 the teen and i have shared some pretty awesome moments at the ol' disneyland resort, but i'd have to say that this ranks right up there with our visit to club 33.  we toured cars land with people who helped create it, while it's still brand-spanking-new and untouched by hordes of folks who'll be stampeding every inch of it come june 15th.  we got to see it completely empty, with fresh paint everywhere and structures gleaming with brand new neon lights. we were the first non-disney people who were given access to one of just three new rides in the whole land, and even got an exclusive keepsake that no one else will get to have.

last month, i had the opportunity to indulge in a little "holy shit, i'm turning 50" narcissism...and i took it.  it happened ...