you know, it's been a really long time since i let my hair grow out.  it was almost always at least shoulder length up until the bean was a few months old.  and then i met my friend MBOC, who had the most awesomely flattering 'do, and i decided to give it the ol' mom chop.  i still love that cut, but i feel like i've been wearing it so long that it's just...done.

so here i am, with scraggly ends and a misshapen head, torn between cutting it off again for the summer and continuing to let it go, pulling it up in a rather unflattering ponytail.  pretty deep dilemma i'm stuck in, eh?  and when i busted out the flatiron last week for the first time in ages (longish hair also makes me pretty darn lazy), i was pretty surprised at how long it's really gotten. 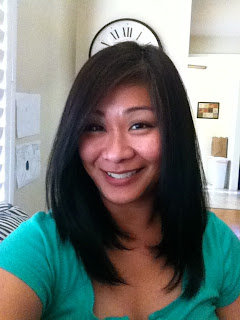 i realized that i had enough length to actually try something fun and new, and after perusing my pinterest beauty board, i settled on this idea - using my own strands to make a braided headband. 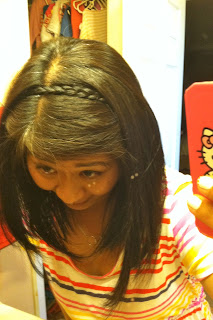 i thought my hair stuck out a little oddly on the sides, but after a little manipulation i got the stamp of approval from both the teen and rock-ell. 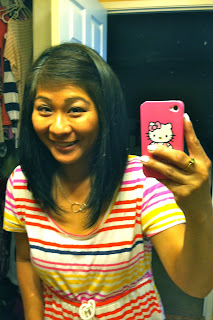 the only downside: i spent the whole evening feeling as though my sunglasses were perched atop my nugget.  plus, the hair at the top could've used a swipe or twelve with a teasing comb and some hairspray, to give it a little volume.  but hey, not too bad for a first attempt...right?

just smile, nod, and go with it.  thanks.