i talk about the bean a lot.  i guess it's because i spend a lot of time with her, since she's only in school three times a week, for only three hours a day.  so when the teen is home, every other week, we really love hanging out with her.

if you've been reading for a while, or have had the chance to peruse this post, you'll know that teen and i have a really special relationship.  i consider myself super duper lucky that she's still willing to be seen with me out in public, and even in places where we're sure to run into someone she knows.  hell, when i was 16-going-on-17 (do you have the song in your head now?  you're welcome), if i had a choice between hanging out with friends and kicking it with my mom, well...i'm sure you get it.  sorry, mom.  i love you.

anyway, i didn't know it was even possible, but i feel like the teen and i are closer than ever these days than before.  okay, so i don't actually believe that she tells me everything - i'm not that naive.  but i do think she voluntarily shares more with me than the average teenager does with their parents.  and we seriously have the BEST time together, no matter where we are.  we could be sitting at home and catching up on one of the shows we watch together, standing in line at disneyland, or just walking through target on a completely normal, everyday-type trip to pick up essentials, and we laugh like loons the whole time.  like this: 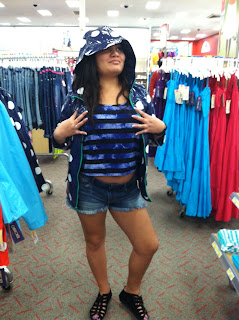 or like when we're at forever 21 and i discover that scrunchies are apparently making a comeback (barf), and she picks it up to model it for me. 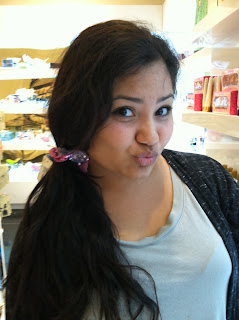 and then there's the super random moment while we're watching the bean at gymnastics class, and i happen to glance over and catch her taking a picture with her sister's little friend. 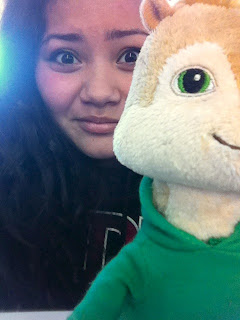 i swear, no one makes me laugh like this girl.  and from what i can tell, she gets a kick out of my antics too.  for the most part, anyway.

now i'm totally aware that there are times when i annoy the crap out of her, like when we're out somewhere and i start singing along to whatever's playing at the moment and completely messing up the lyrics.  or when i do a happy dance while we're eating ice cream or something.  i know, you just can't imagine being annoyed by stuff like that, right?  it's really endearing, or at least i think so.  unfortunately, sometimes, the teen doesn't agree.  oh, well.  to-may-toh, to-mah-toe.

over this past weekend, while she was at her dad's, i randomly sent her a picture or a video of the bean doing something silly.  you know, the usual.  i do this often when she's gone, so she can see what we're up to and knows we're thinking about her.  a couple of minutes later, my phone buzzed with a text back from her, and it simply said "i miss you guys."

and then i got a little choked up.  and it didn't even have anything to do with PMS.  because while this isn't the first time she's sent me a similar text, it was the first time i could remember that it wasn't in response to me saying it to her first.  on those fridays that she gets picked up by her dad, i'm always so freaking sad to watch her go.  the house just isn't the same when she's gone.  there's a little less laughter and too much quiet.  and more often than not, she's not even gone for more than ten minutes before i'm sending her the "i miss you already" text.

a couple of days later, it happened again - only this time, it was in person.  we were just sitting there, chatting for a few minutes after school as she prepared to hop in the car to drive back to her dad's, and she said "see, i miss you guys when i'm not here."  i managed to hold it together as she said it, but it stuck with me.  that text hadn't been a fluke after all...she really meant it.  this means so much to me.

exactly a week from today, my girl turns seventeen.  SEVENTEEN!  the next time we celebrate her birthday, she's going to be of age, legally a full-grown adult.  holy crap.  i can't believe it.  she'll be more than halfway through her senior year, getting ready to put on a red cap and gown, preparing to take that next step towards creating her future.  she'll likely be moving out on her own, going to school (hopefully FIDM!) and doing her own thing.  i'm sure she'll still come home on the regular, but it'll never be the same again.

she's always going to be my baby, but man.  my heart hurts a little already, thinking of how she's grown up so stinking fast.  when i look at her, i still see that sweet little baby girl who clung to a ratty tiger and could name all of the spice girls one by one.

Email ThisBlogThis!Share to TwitterShare to FacebookShare to Pinterest
Labels: sappy wan, the teen