i'm totally mom of the year material, people.  i kept forgetting to schedule the bean for her 4-year checkup at the doctor's.  um, her birthday was in october.  crap.

because i'm a total wuss, i made the appointment so that the hub would be free to join us.  those doctors always want to stick the poor girl with some type of vaccination, and i'm just not strong enough to handle it.  by that, i mean both physically (because she totally flails around in horror) and mentally.  so we showed up at kaiser bright and early yesterday morning, and while the bean didn't recoil in fear at the sight of the building like she has before, she kept asking "what are they going to do to me, mommy?"  eek.

the first part was easy.  she slid off her sandals and stepped on the scale: 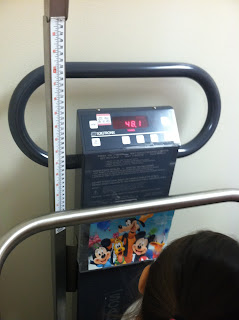 sat down and waited for the nurse. 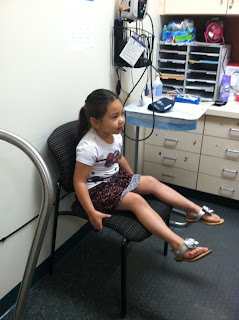 she wasn't sure of what to make of this business, but watched the nurse and listened carefully as she told her that her arm would get squeezed a little, but wouldn't hurt. 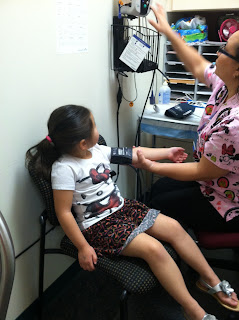 she went right outside and reported to her daddy.  "that black thing squeezed my arm, daddy.  i didn't like it."  i could already see the beginnings of tears forming in her eyes, and dreaded the rest of the appointment.

next was a hearing test, during which she shouted an enthusiastic "YES!" every time she heard the noise through the headphones. 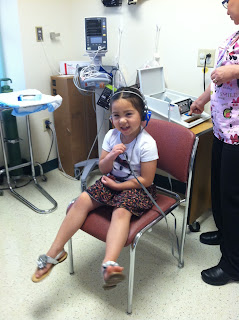 vision test.  i thought it was funny that she called the moon shape a "crescent."  she's such an old lady. 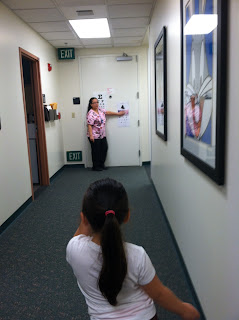 in the exam room, she questioned everything.  "why do i have to get naked?"  "are those puppies on this dress?"  "those sticks, are they lollipops daddy?"  oy. 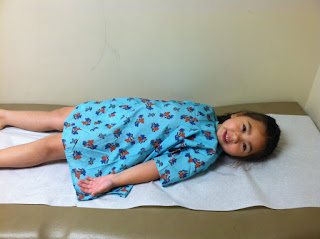 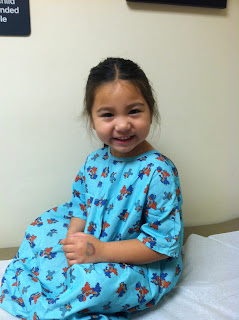 the actual examination with the doctor was easy peasy.  she checked her lungs, her tummy, eyes, ears, etc.  and then she dropped the bomb:  four immunizations.  all with separate needles.  whooping cough, polio, chicken pox, tetanus.  son of a...

she was predictably upset the nurse explained gently to her that she was going to give her some medicine in her arms.  she looked up at her with the saddest, scaredy-cat eyes and said "but i don't want to have any shots."  the nurse smiled and said "i don't want to give them to you either, but you need them to stay healthy."  and then the hub took her into his arms and i stood behind her to smile and try and keep her spirits up.  at the nurse's "1, 2, 3" her eyes got really big and filled with some serious tears, and she yelped "OW!" as she cried out in pain.

i'd snuck a new toy in my purse, anticipating a possible need for it.  i whipped it out and held it up for her to see, and while it distracted her for a nanosecond, the next "1, 2, 3" killed it.  two more times, and then she was done.  thankfully, the nurse just went bam-bam-bam-bam to get them over with, and while the bean was pissed as hell, she nodded as we explained that the medicine would keep her from getting sick.  but she cried for a little while longer, and the hub and i exchanged helpless glances as we continued to comfort her.

the doc said that her BMI was a bit high.  she's above average for height, but also for weight.  and so i got the eyes from the hub as we were told to limit juice (which she doesn't ask for often) and milk (which will be tough, since it's her favorite drink).  a reminder to fill up on fruits and vegetables got me another side-eye from the hub.  agh. 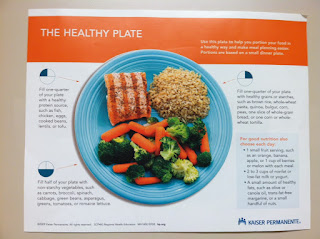 knowing that i need to do some serious rehabbing of our meals, i'm looking for good ways to incorporate the good stuff into each one.  unfortunately, the bean is even pickier than her mother - she won't touch ANY fruits or vegetables.  if she sees them mixed into whatever she's eating, she will take the time to painstakingly remove every bit of greenery before she puts it into her mouth.

i tried making us a smoothie with lunch - which was a pinwheel sandwich with turkey and cheese on whole wheat bread. 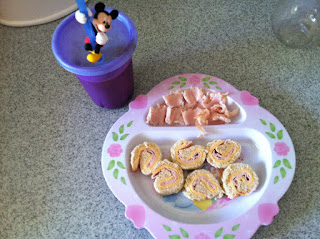 she took a sip: 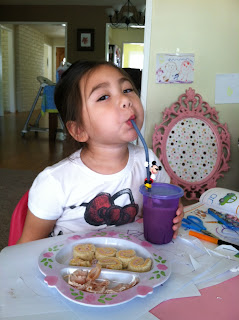 and she was NOT impressed.  she immediately went to work on making me this sign: 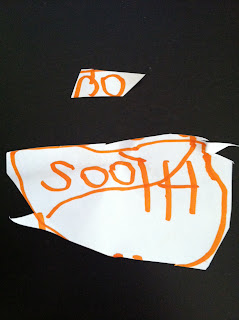 and as she handed it to me, she gave me a stern look and said "no smoothies, mommy.  i don't want to drink it.  i don't like the smoothie one bit."

help.  aside from pureeing the veggies and mixing them in so that they aren't detectable...what do i do?  i need suggestions, people!  please?
at May 09, 2012