you know how my MIL is always up for an adventure, right? well, she totally outdid herself during this last visit. get comfy, it's storytime.

once upon a time, we piled the whole family (ILs, grandparents, the girls and us)  in two cars and headed down to orange county to try slaters 50/50, where they were serving up burgers made with half ground beef and half bacon. but it was such a new and popular notion that there was a two-hour wait for a table. no bueno.

so when MIL and i were going over places to grab some delicious food during her last visit, slaters came up as an option. it just so happened that they posted on facebook about an upcoming spot on the travel channel that they'd be filming one afternoon. woohoo!

after we dropped the bean off at school and got a workout in, we got cleaned up and headed out to pasadena for lunch. when we arrived, the hostess explained that they were doing a taping and that they were offering an off-the-menu burger just for that day. 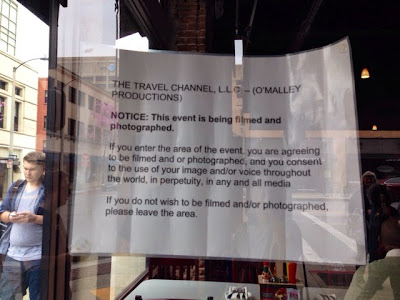 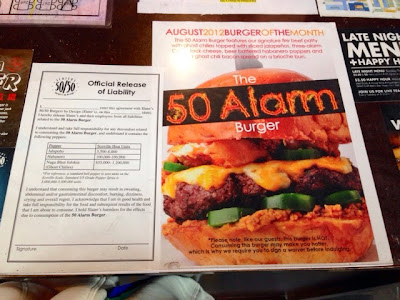 apparently, this thing is so chock-full of peppers in varying degrees of heat that they require a waiver to be signed and provide gloves to wear while eating it. MIL took one look at it and decided to
take the challenge.

"oh, cool! you'll probably be taped for the show then," our server said.  with a shrug of her shoulders, she reviewed the waiver before signing her life away. 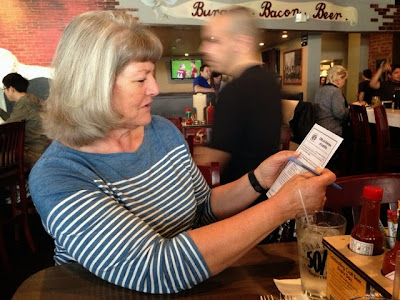 she was photobombed by kyle, slaters' floating store manager. he totally remembered me and the teen from last time. 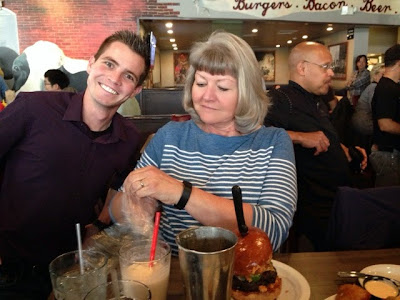 the teen was so annoyed. "i can't believe you're doing this to me again," my camera-shy kid lamented. i had told her about the filming, i remember it clearly, but apparently she'd forgotten. or, more likely, she hadn't been listening to me. wouldn't be the first time. and to rub it in, camera equipment was sitting on the bar just off to the side. 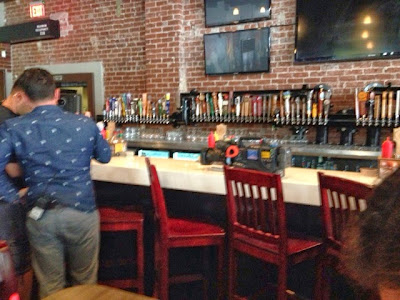 she and i had placed an order for customized burgers along with MIL's 50-alarm burger, plus a plate of appetizers. it arrived first: fried dill pickle chips, slaters fries, and mac & cheese balls. 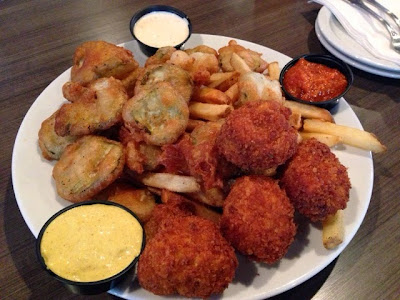 at that point, a couple of slaters employees came over to greet us and prep MIL for her moment in the spotlight. they did a double take when they saw the teen and me, and squealed as they recalled our last visit.

"OMG, you came back! this is so great, you're gonna be filmed again!" i just grinned like an idiot while the teen cringed and tried to shrink down into her chair. then they asked if we'd be willing to eat the crazy hot burger, which we definitely were not. i am a major wuss when it comes to spice, although i allowed myself to be talked into trying their sriracha burger for the camera, while the teen reluctantly agreed to an order of their buffalo chicken mac & cheese.

see how happy she was about it? 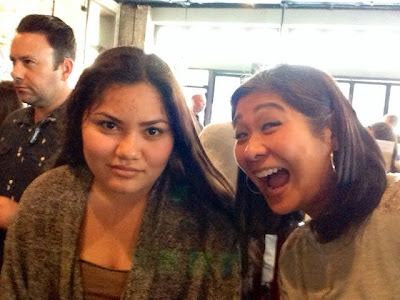 just like last time, our food was brought to the table only to be taken away again for the filming. this was the teen's pastrami-topped creation. 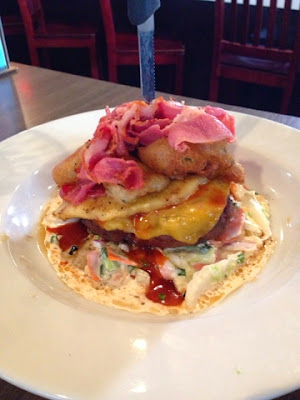 at the bar, we watched another sucker guy sit down, sign his waiver, don the gloves and tuck right into his spicy lunch. 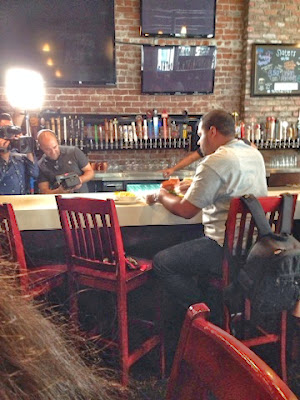 then the production guys came to our table to catch MIL signing her waiver on camera. 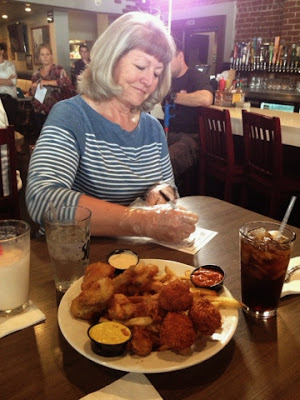 a few minutes later, the sound engineer came over and got us all mic'd up. 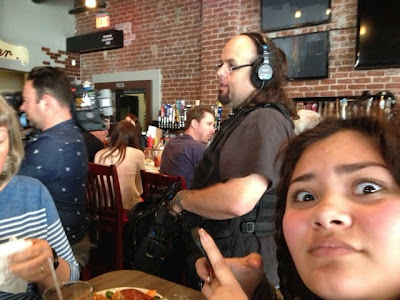 as they filmed MIL doing her thing, i watched on the little monitor. 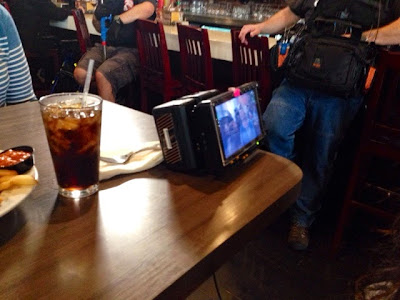 i was kinda nervous about my own segment. not only were the bright, hot lights beaming down on me again, but the spiciness of the burger i was supposed to eat was already making my nose tingle. while i was mortified about how sweaty i was getting (what else is new, right?), the guy conducting the interview seemed to love it. i guess if you're trying to highlight spicy food, breaking out into a sweat while eating it is the reaction you want, huh?

and just like last time, the burger was super messy. i had stuff all over my face and hands. so HAWT. 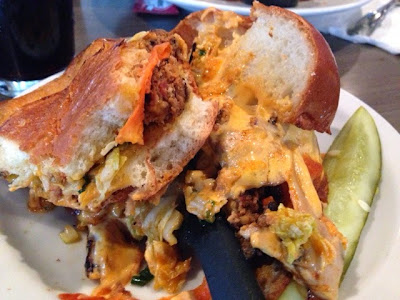 it was the teen's turn next to take bites of her mac & cheese and answer questions about the food from the dude standing just off-camera. 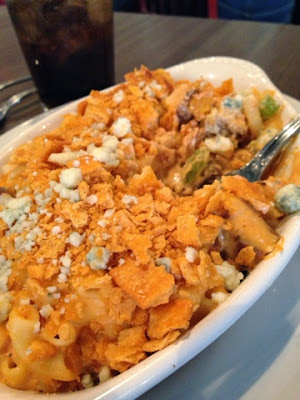 i managed to sneak this. 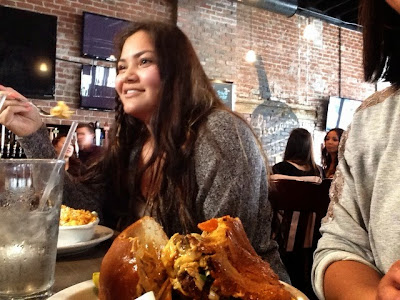 and just like last time, we had our burgers wrapped up to go and the entire meal was comped. 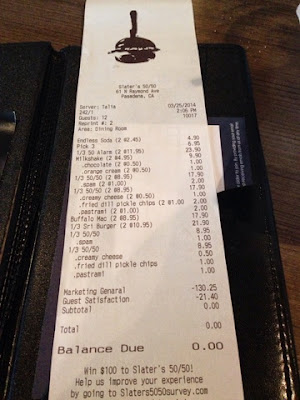 before we left, we managed to snag a photo with the executive chef (who had served the spicy grub to us for the camera) and the owner of the slaters 50/50 chain. 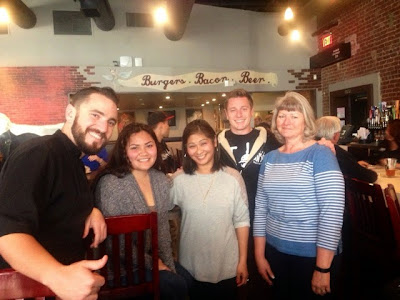 bacon paradise, travel channel, august. watch and see if we make it on the show or end up on the cutting room floor.
at April 07, 2014