a couple of weeks ago, i was lucky enough to catch a master class taught by andrea rogers, the very tiny, very fit, very gorgeous lady who created xtend barre.  you know me - i'm a crazy xtend groupie, and so i was pretty much fangirling all over the place as she introduced herself to me.  i managed to keep it together and didn't make an ass of myself, and i was all giggly and awkward when she gave me a big hug and said "oh! i recognized you when you walked in!"

because, after all, i'm the oversharer who posts constantly on all forms of social media about how much i love this place.  heh.

the rancho cucamonga studio is just so different from my comfy little home base in la verne.  it's gorgeous, but very modern and about twice as big, it seems.  it reminds me of one of those little boutique studio gyms on the west side that's totally intimidating and usually packed with cliques of skinny chicks clad in the same lululemon gear that i look rather stumpy and troll-like in.

there was another lady there who was traveling with andrea, and she was really friendly and chatted with me about xtend and how i liked it.  i turned the conversation around and said "so, do you do the PR for xtend?" and then i pretty much died and wished really hard for a hole to open in the ground for me to fall into when she said "oh, no, i'm the former CEO.  now i'm on the board."

after i tried to laugh it off and take a second to remove my foot from the gaping hole in my face, i changed the subject again and then i was saved by the bell.  like, literally - her phone rang and she excused herself to take the call.  holy shit.  how dumb did i feel?  her name is elizabeth lorber,
and although i was rather mortified at my blunder, i still managed to do this: 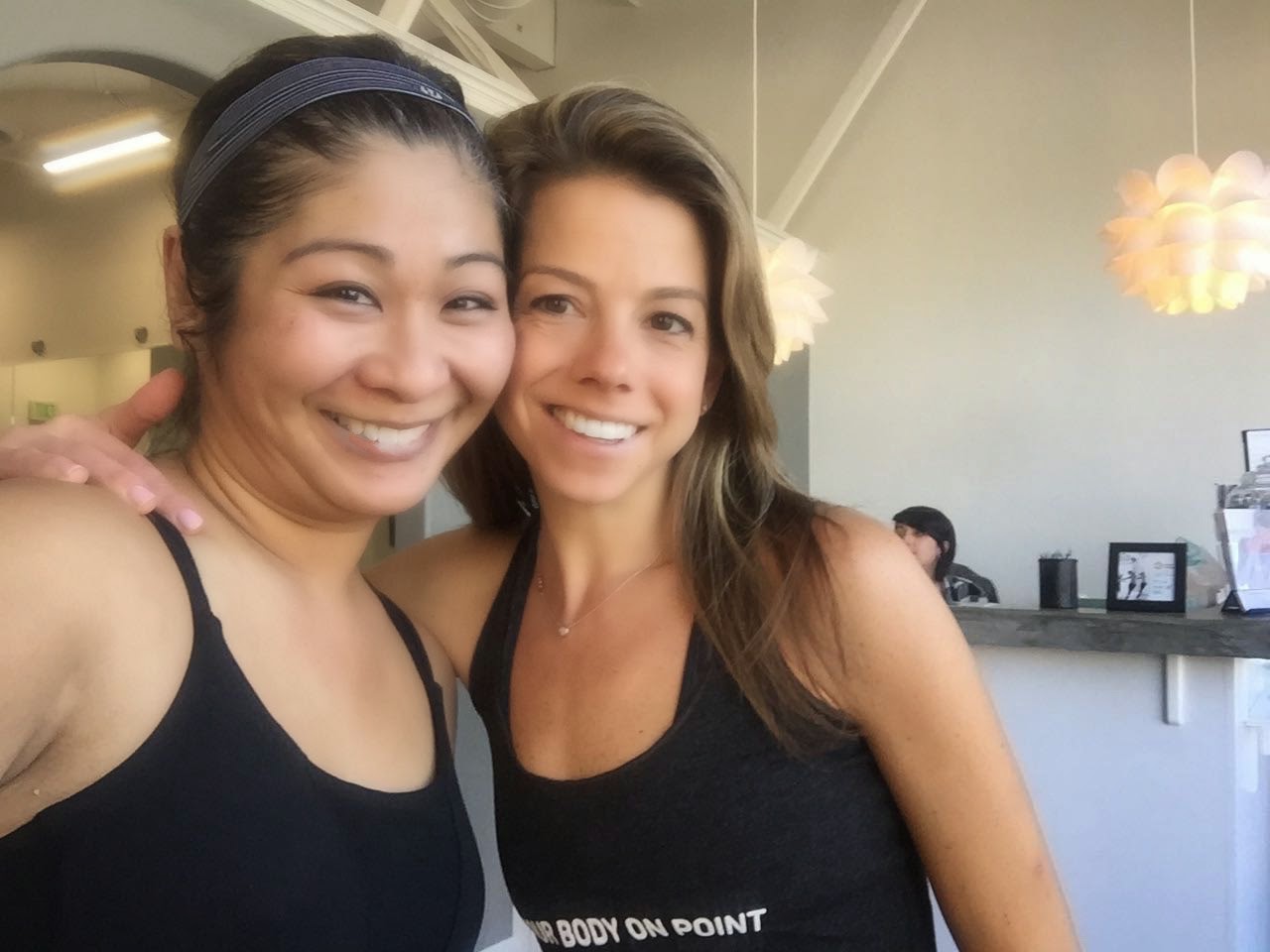 and then it was time for class to start.  you know it's going to be a tough hour when the instructor who usually kicks your ass confesses that even she's a little nervous for this one.  gulp.

as expected, we all got our asses handed to us on a silver platter.  in a good way, though.  if you look hard enough, you can spot me lurking in the back of class trying not to draw any attention to myself as i huffed and puffed through it. 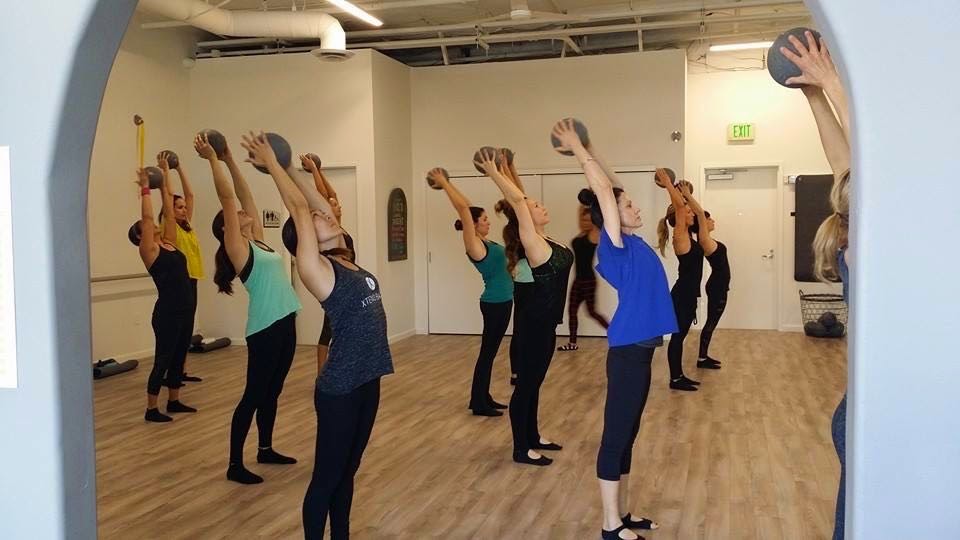 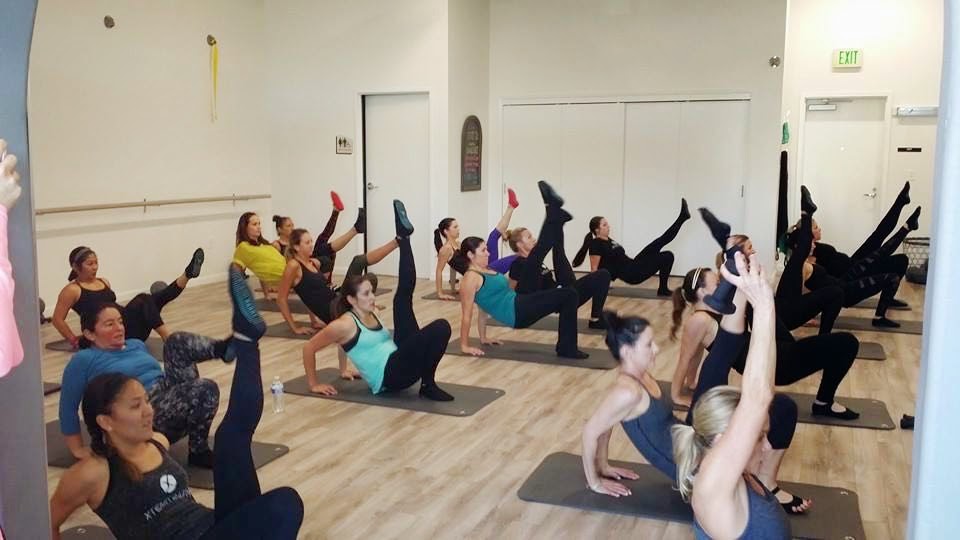 andrea is a fantastic instructor, and although it was damn hard, it was fun to see her teaching style and follow her cues through some familiar moves, plus a bunch of new-to-me ones.  i was disgustingly sweaty by the end of it, which is nothing new, and i knew i'd be sore for at least a day or two afterwards.  and despite my grossness, she gave me another hug and told me that i'd done a great job of pushing myself in class.  i love her. 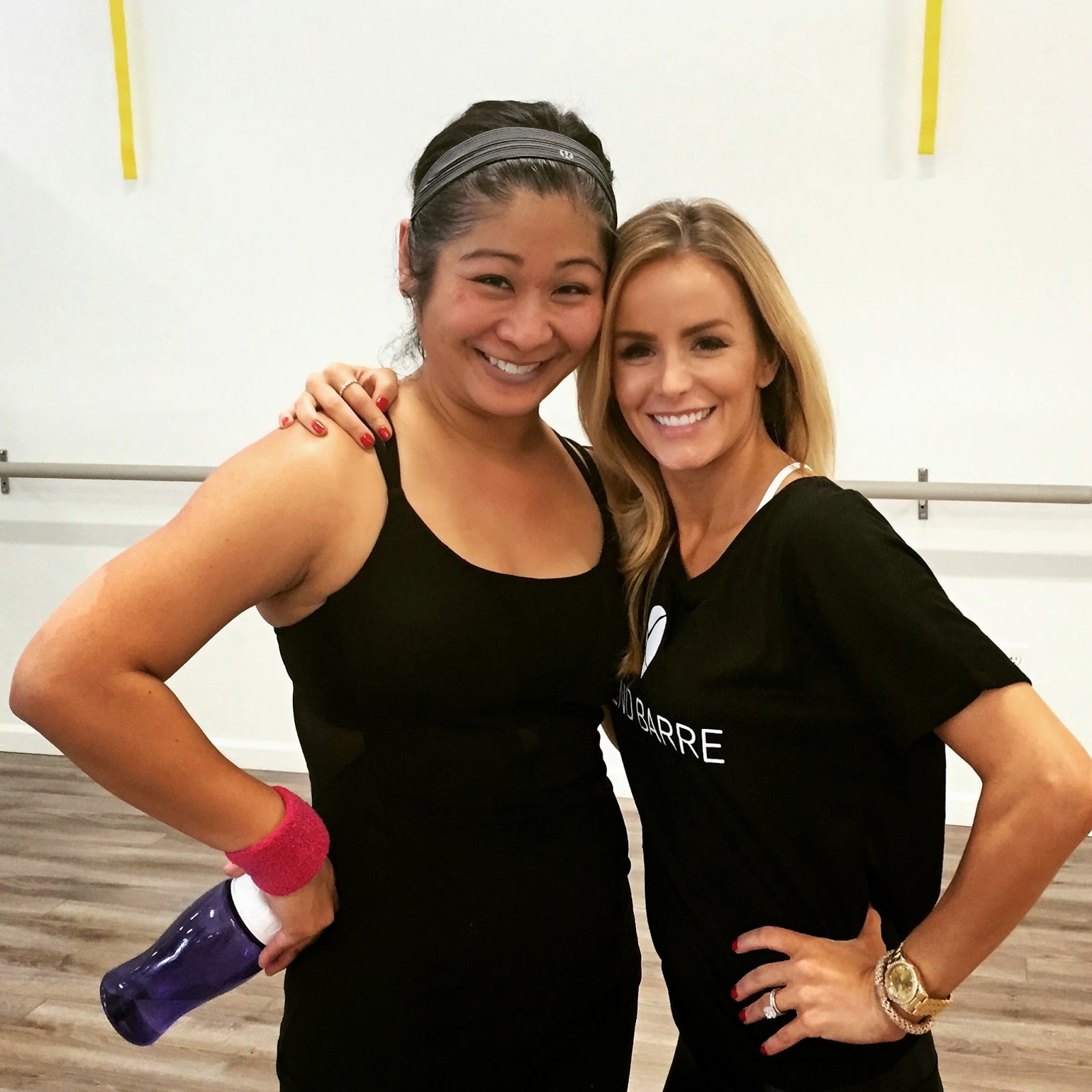 i look like a freaking giant next to her, though.  yikes.  and yes, i did wear makeup to class.  because DUH.

just a few days later, i was excited to cash in my prize from november's "bring a friend" contest.  i'd managed to drag in four of my friends to their first xtend class, and my reward was a free private class. 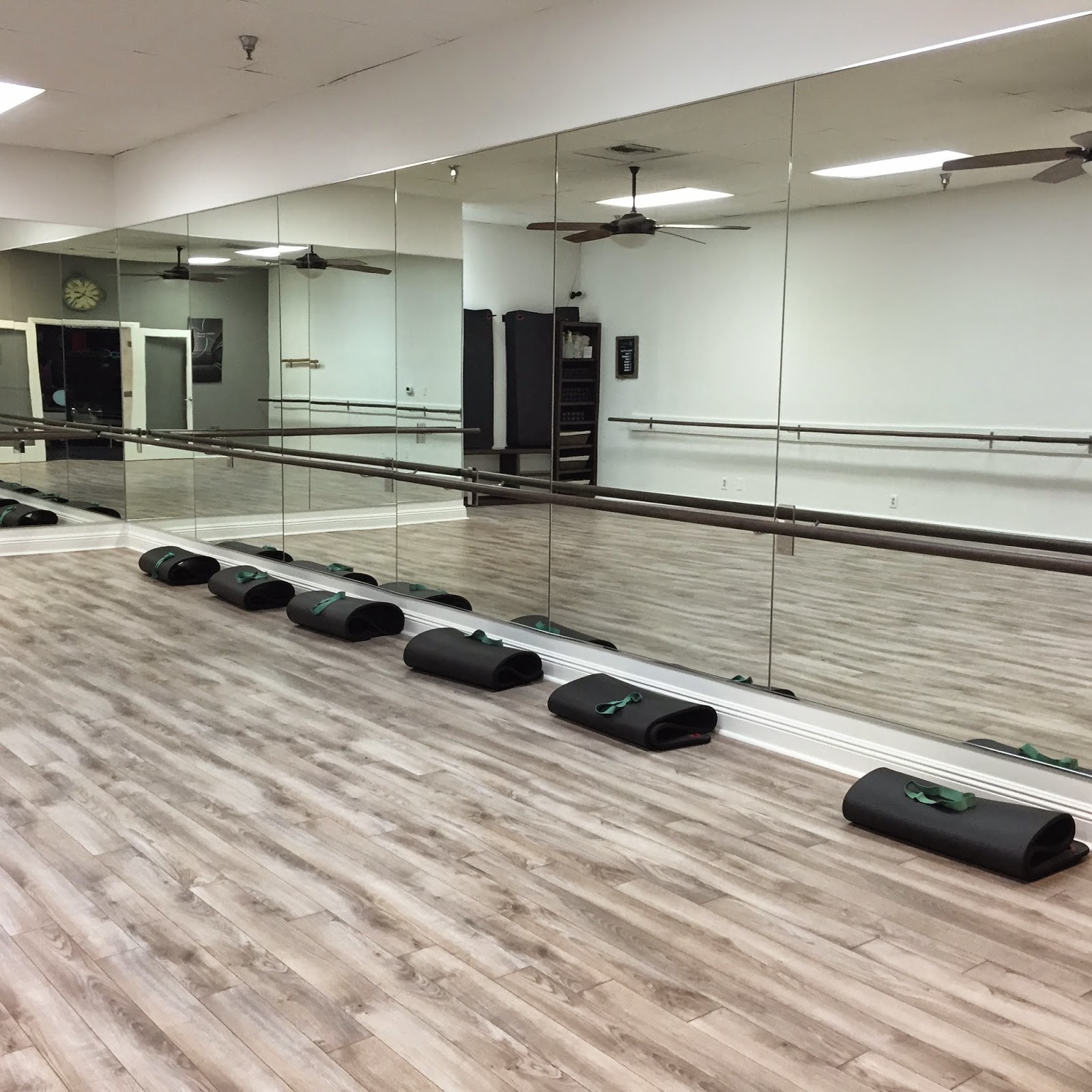 and so on a friday evening, a few of my nearest and dearest came to work it out and get a jump on burning the calories from the upcoming weekend.  here's the before shot: 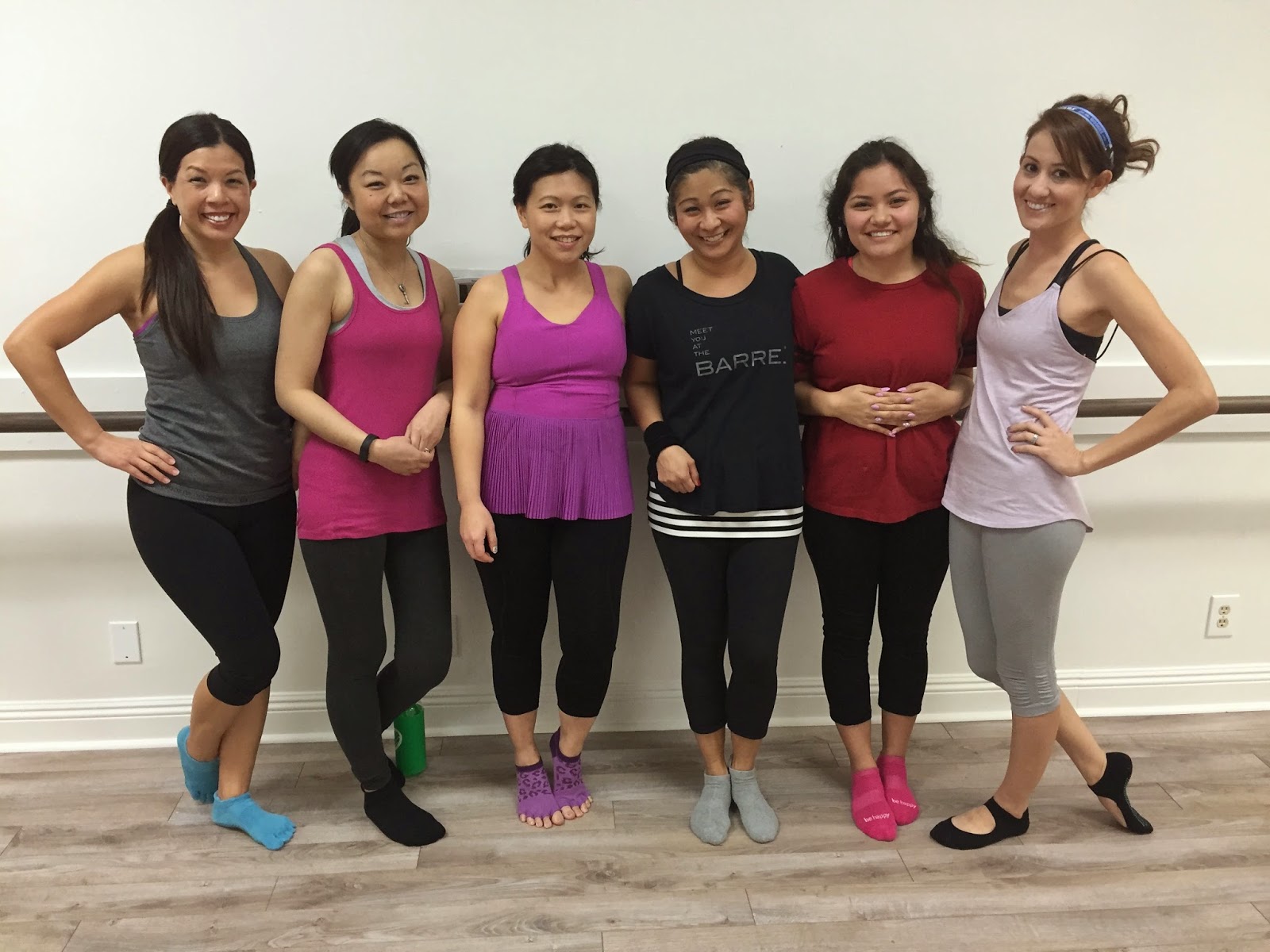 we did a little planking. 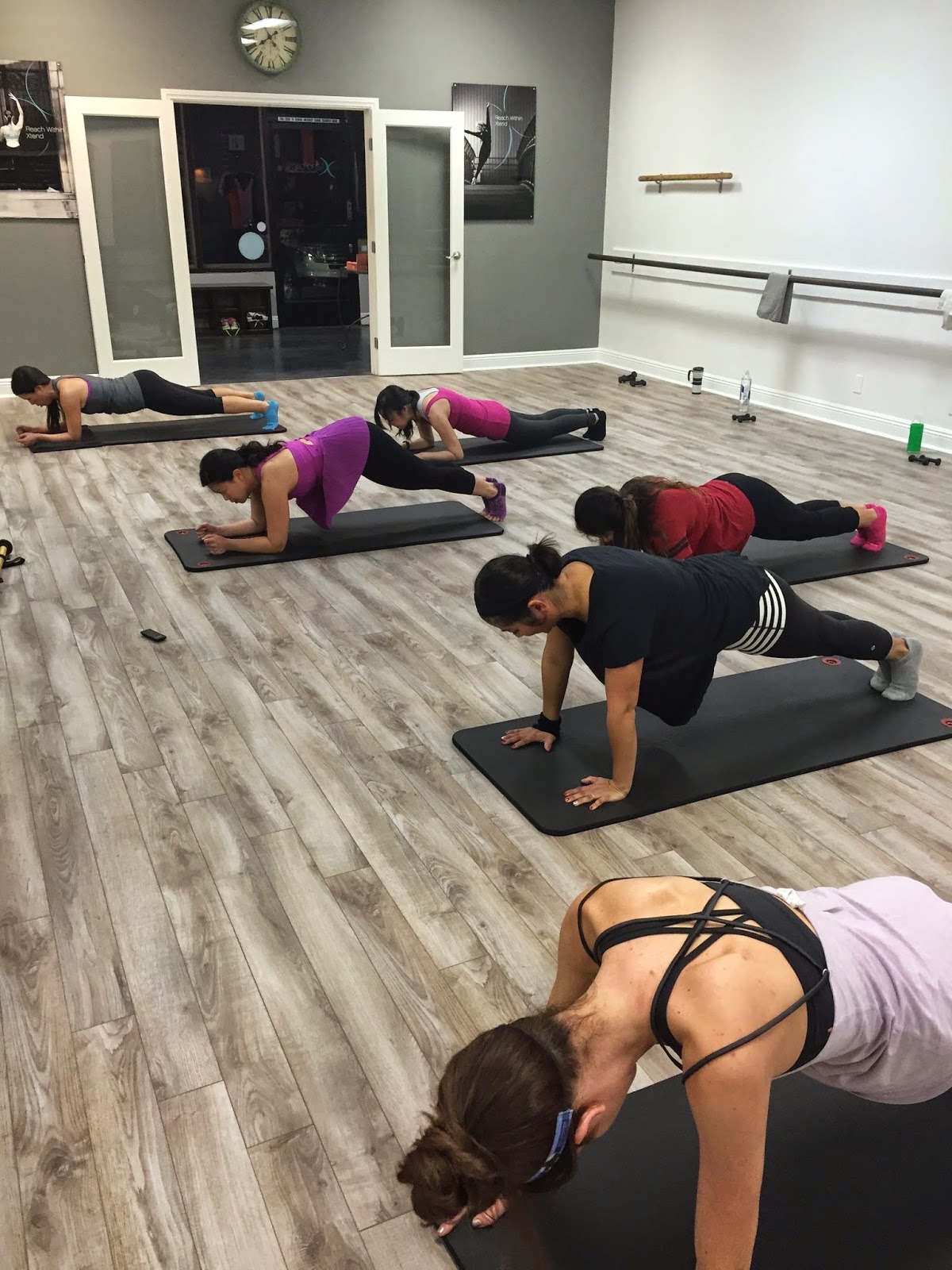 some pliés at the barre. 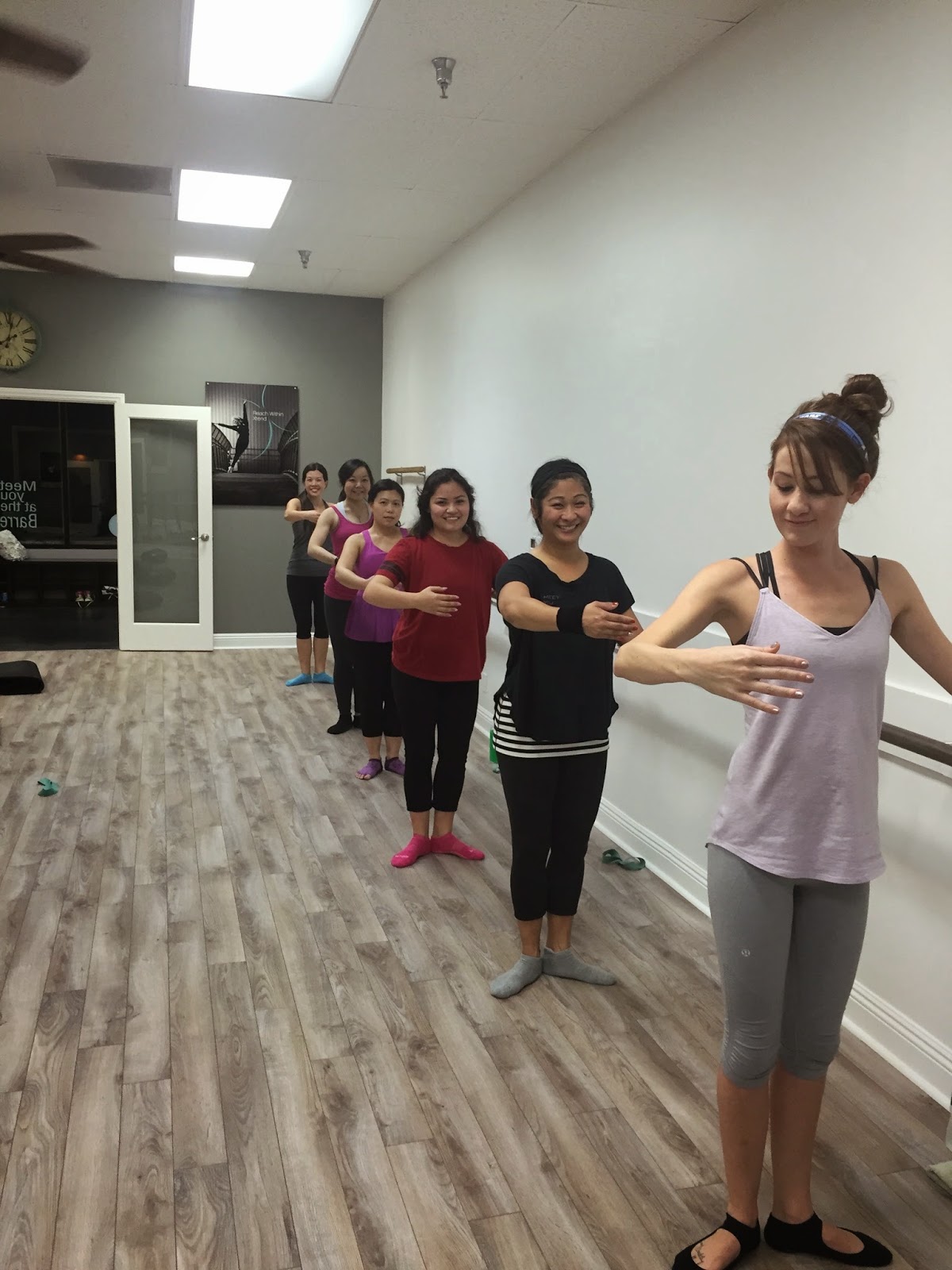 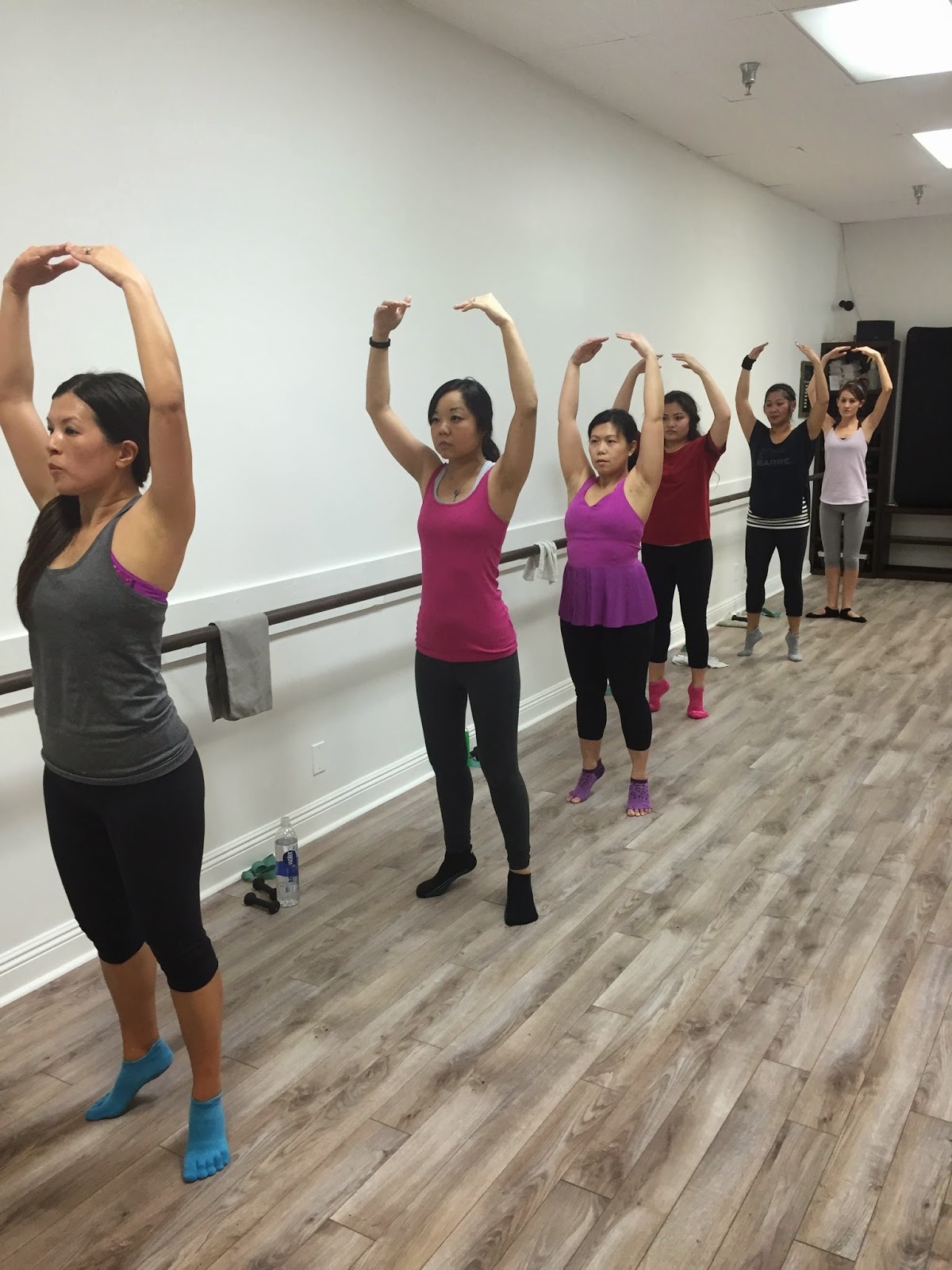 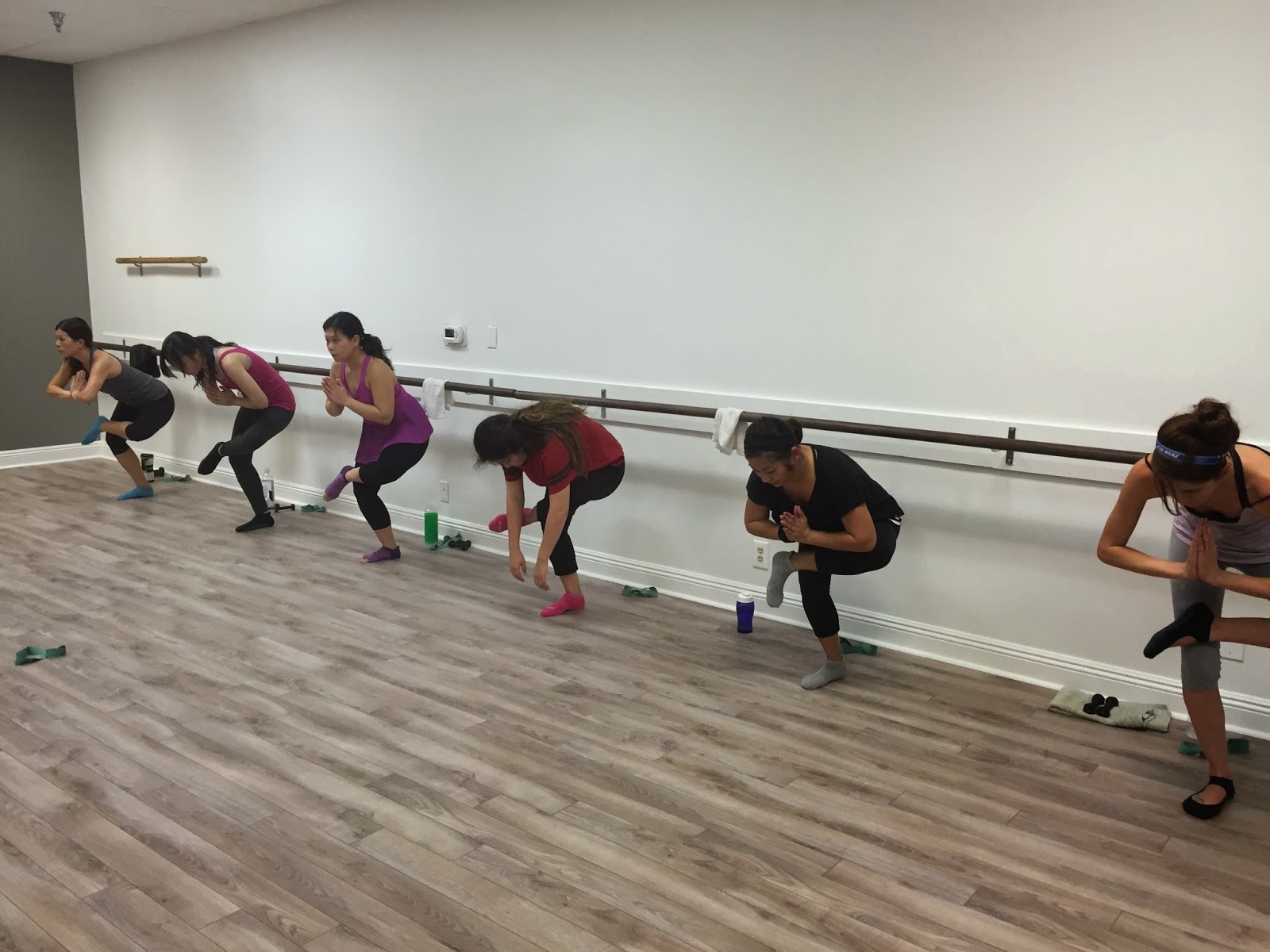 and finally, some core and ab work using the stick. 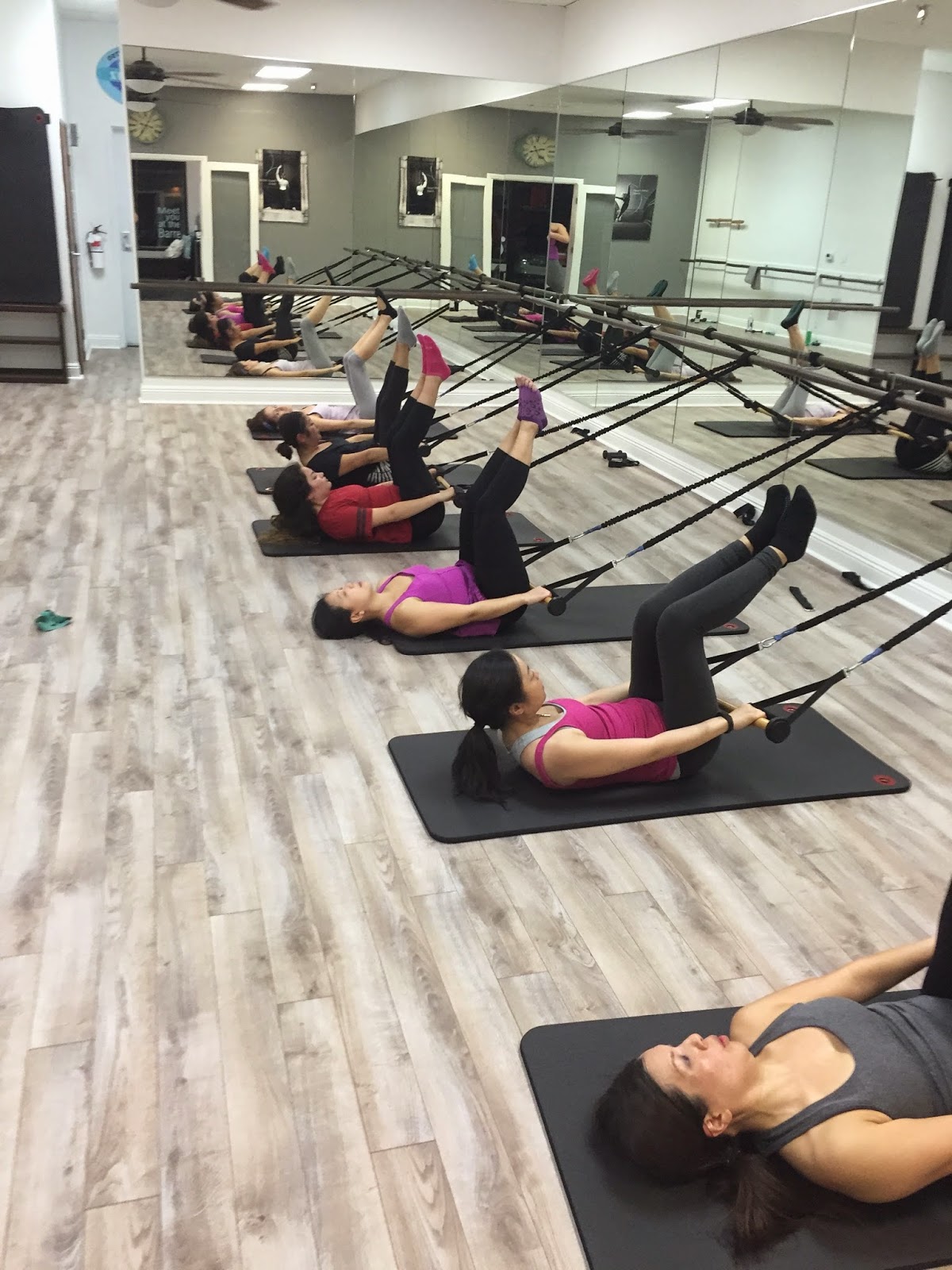 i'd show you the "after" photo, but it pretty much looks exactly like the "before" one.  instead, i'll give you me with rebecca, one of my very favorite instructors. 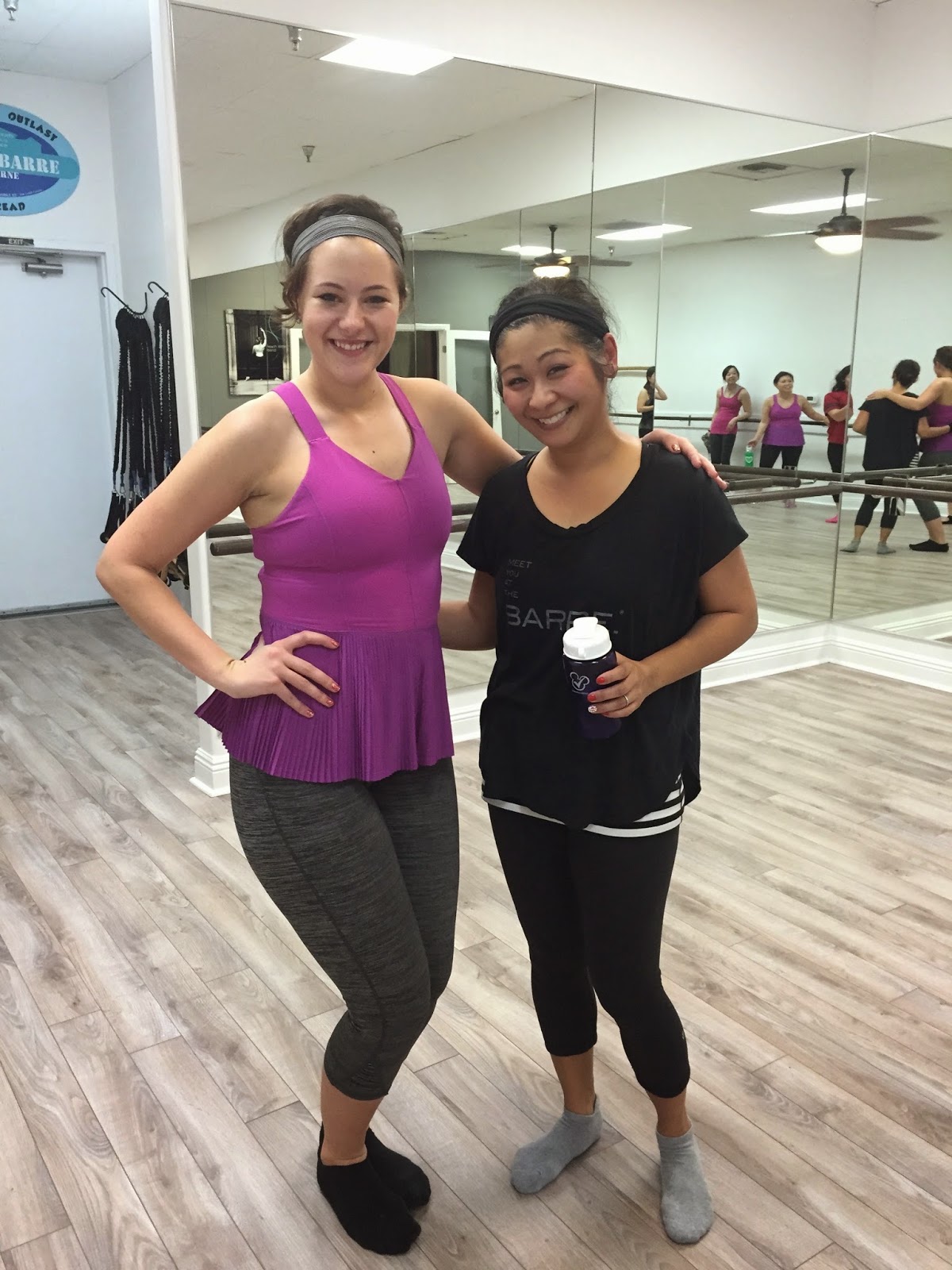 this is the only workout i've ever stuck to for this long.  it's been at least a year and a half, and i still love it.  it's always different, every instructor has their own style, and it never gets boring.  while i know the basic formula (warmup, weights, mat, barre, mat, stretch), i never know what to expect - and i still get my ass worked in every class.