okay, so although the bean is in her third year of elementary school, there's one special occasion that they celebrate that i still don't really get.  it's something i don't ever remember doing, nor does the teen.  and yet a quick search on pinterest tells me that a lot of schools all across the country commemorate this day.

i'm talking, of course, about the 100th day of school celebration.

well, i guess there isn't really any "of course" about it, considering i'm totally perplexed by the whole notion of this "holiday."  when she was in transitional kindergarten, parents signed up to bring snacks like cheerios and goldfish and other small edibles.  on the 100th day, they played a bunch of games and then got to fill ten little baggies with ten each of those snacks.  last year, they made hats that they stuck 100 of some random chosen item on and paraded around the school.

this year, we were asked to buy a plain t-shirt and stick 100 pieces of something on it for them to wear to school.  last year, i'd seen all sorts of things from legos to pieces of candy to stickers and all sorts of other stuff in between.  as the bean and i perused ideas on pinterest, one in particular caught her eye, and so off to michaels i went for some basic craft supplies.

one afternoon, while she was doing her thing in gymnastics class, i busted out the cordless hot glue gun to get to work.  can you tell what we were going for here? 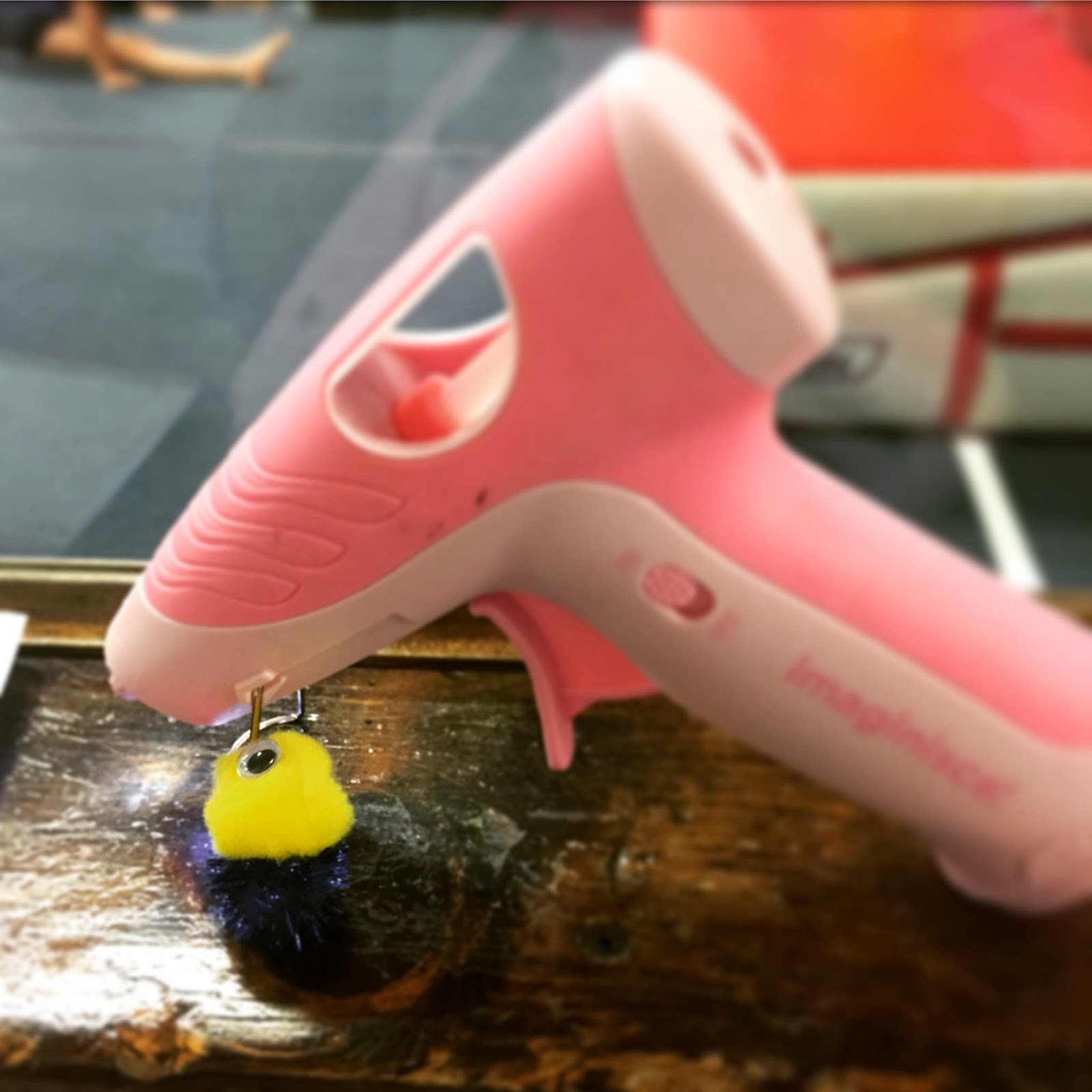 with the teen's help, i managed to put together 90 of those things over the course of a hour and fifteen minutes.  everyone out on the floor, coaches and students alike, got a kick out of watching the pile grow and grow. 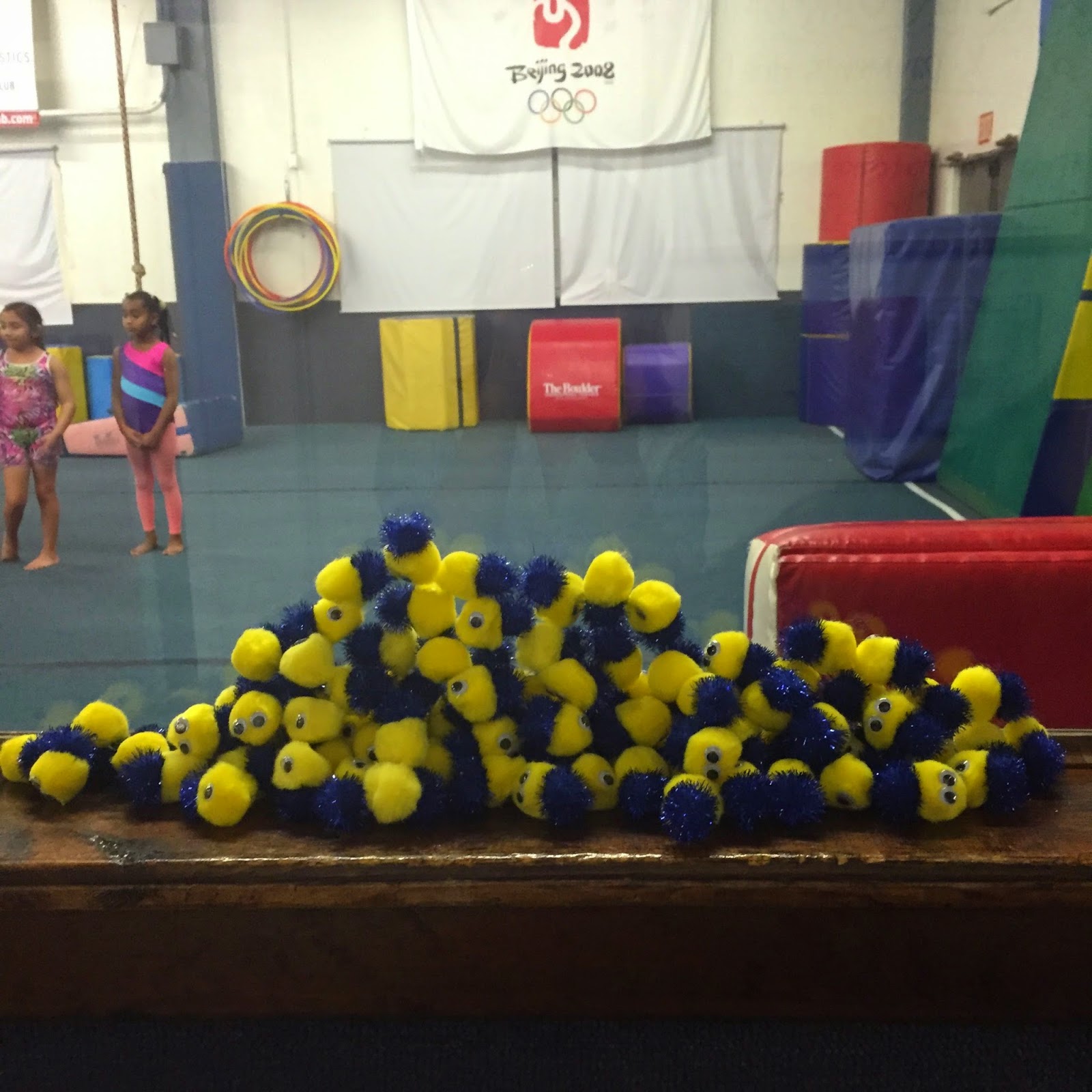 later that evening, after dinner was served and cleaned up, i got out the black and silver puffy fabric paints and added the final touches to each little guy.  pom poms aren't particularly easy to draw on, so they were far from perfect.  but with so many of them to be clustered together, i figured it was okay. 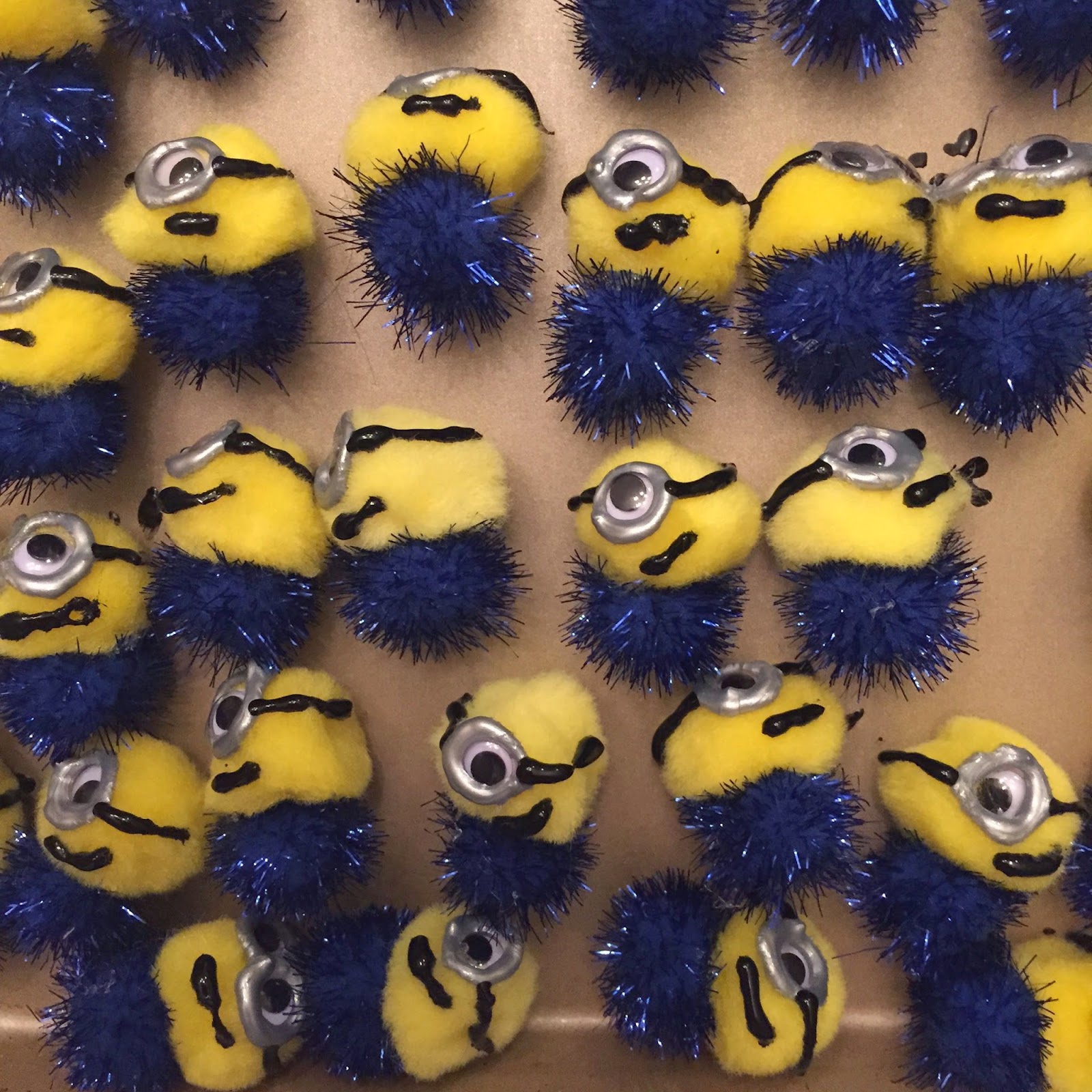 i finished every last one of those things and set them out to dry overnight.  and then they sat there on the table for a couple of weeks until - oh, hey, the night before she was to wear the shirt.  heh.  but it was fairly easy to get the project completed, and in between everything else i was working on that evening, i managed to get 'er done. 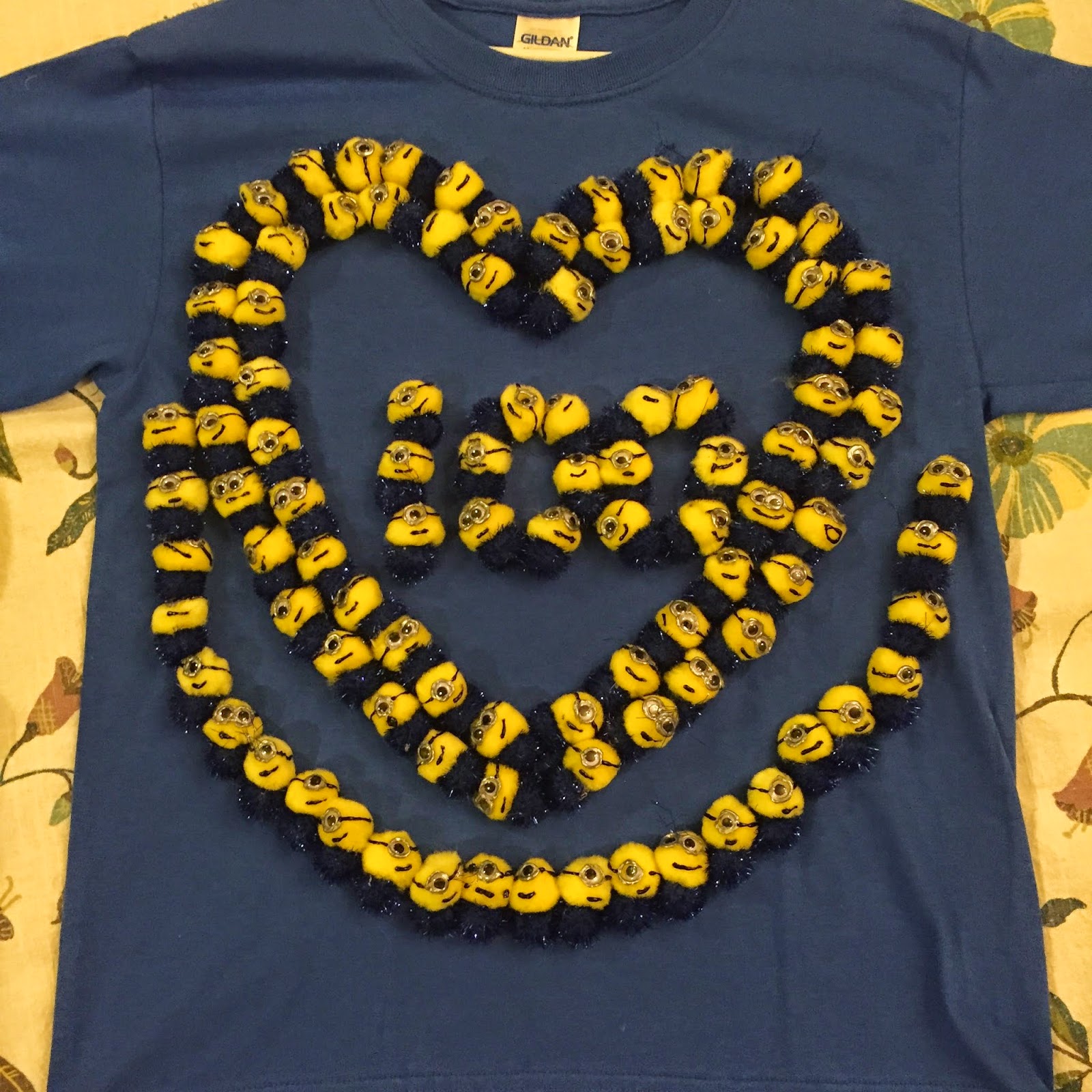 it's funny though - although pom poms are fairly light, when you glue them together with googly eyes and then cluster a hundred of the damn things onto the front of a shirt using more hot glue, it ends up with a fair amount of weight to it.  the bean didn't care, though.  she was really excited to see the final product, and even more so to put it on and wear it to school. 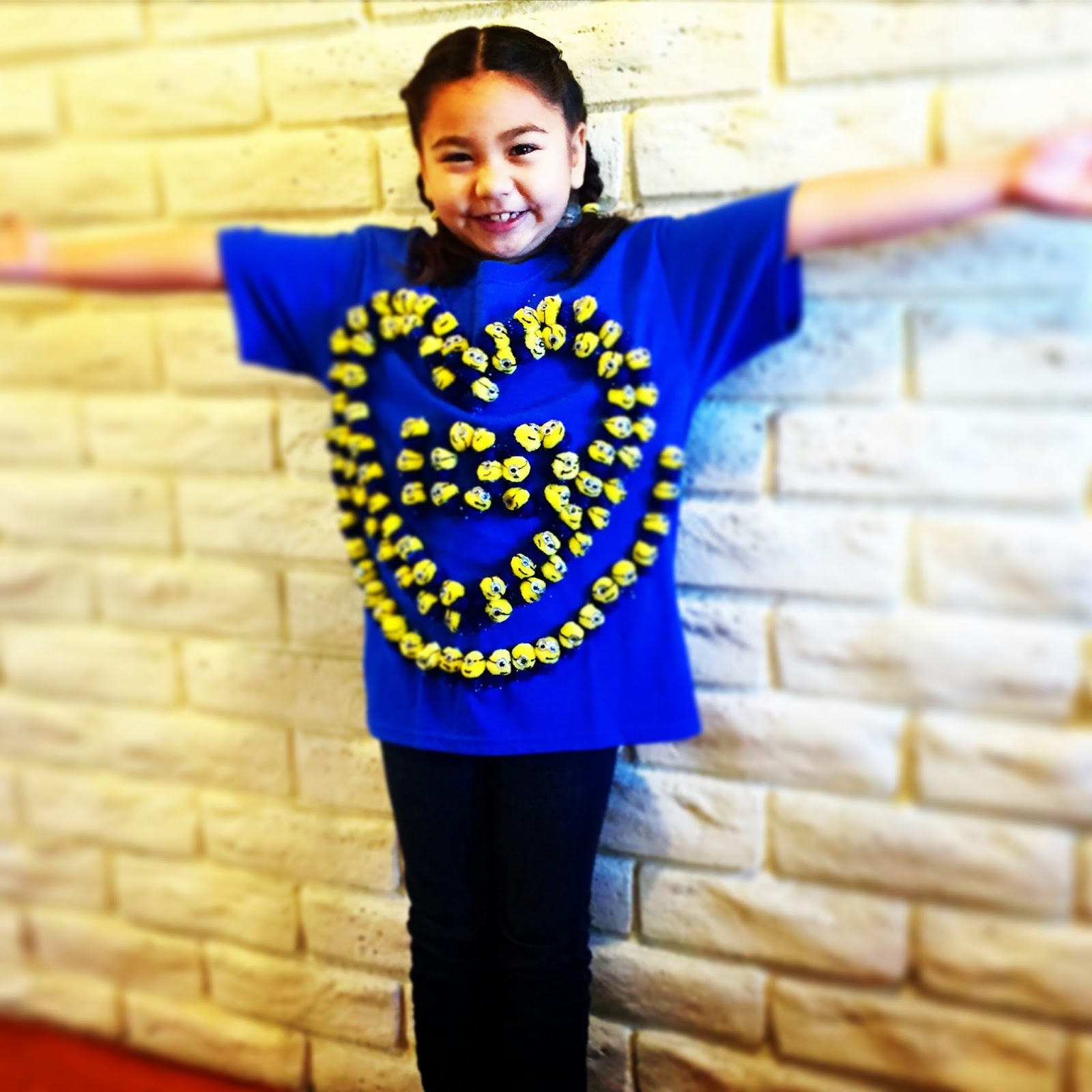 it was fun to watch people double-take as she walked onto campus that morning, and the look of pride and joy on her face was totally worth all of the hot glue burns on my fingers.  it always is, isn't it?