tales from a junk food junkie

remember when i went to xtend a couple of weeks ago for my official weigh-in and measurements for the challenge?  that juice bar that brought the samples of their juice cleanse had offered a tasting session to all challenge participants for free - usually $15.  we'd get to taste all of the individual juices that they mix up into the different concoctions for the cleanse, and i'd signed up for it.

except that it was on a sunday from 6:30-8 or so, and with the extra added wrinkle of it being super bowl sunday, i wasn't able to attend after all.  the hub was at the lounge hosting a big party for his customers, and i couldn't very well drag the bean to an hour-plus class that she'd 1. be super bored at and 2. miss her bedtime, which would 3. lead to a difficult monday morning.  i mean, mondays are a drag as it is.  i really didn't want to add to the misery.

but when i noticed a healthy cooking class on the schedule at noon on a weekday, i decided i wasn't going to miss out on another chance to add to my clean eating repertoire.  although i have to say, when the chef walked in wearing a jacket embroidered with a logo for a food processor, i was...uh, slightly apprehensive.  and sure enough, while she did educate us on different techniques and procedures for cooking healthy meals, her spiel was peppered with little hints at ways to earn one of those snazzy food prep tools for free.  it was a little like being in the audience of an infomercial.

as she continued with her presentation, she pulled out ingredients for an easy main course that she started throwing into an electric cooking device that apparently maintains the proper temperature for preventing nutrients and vitamins and other good stuff from escaping from food.  i guess when you cook things above 212 degrees, the healthy parts of food starts leeching out into the air or water or whatever is in there.  so this cooking thing starts sizzling or something when the food starts to get too hot, which is your cue to walk over and turn the heat down and save those nutrients.

also, she said that water and oil are unnecessary for cooking because those elements are already naturally in almost all foods.  so she chopped up some garlic and spread it on the bottom of the pan with some chopped onion, and then followed it up with a jar of organic marinara sauce.  next she put in a bag of brown rice pasta, and then a bunch of other veggies that i don't even remember anymore.  instead of putting in cheese, she added some shredded squash that she swore would fool even the pickiest kid (she clearly hasn't ever met mine), and then the lid went on and the pot was set aside to cook for about 20 minutes.

next, she proceeded to use that food chopper to create a salad for us to try.  into the bowl went things like cabbage, red cabbage, celery, cucumber, carrots, butternut squash.  but it took a weird turn when she grated some green apple into it.  and raw ass onions.  and then proceeded to juice and then toss in the pulp of a tangerine and an orange, which served as the dressing.  she plated it for each of us, and it looked like this: 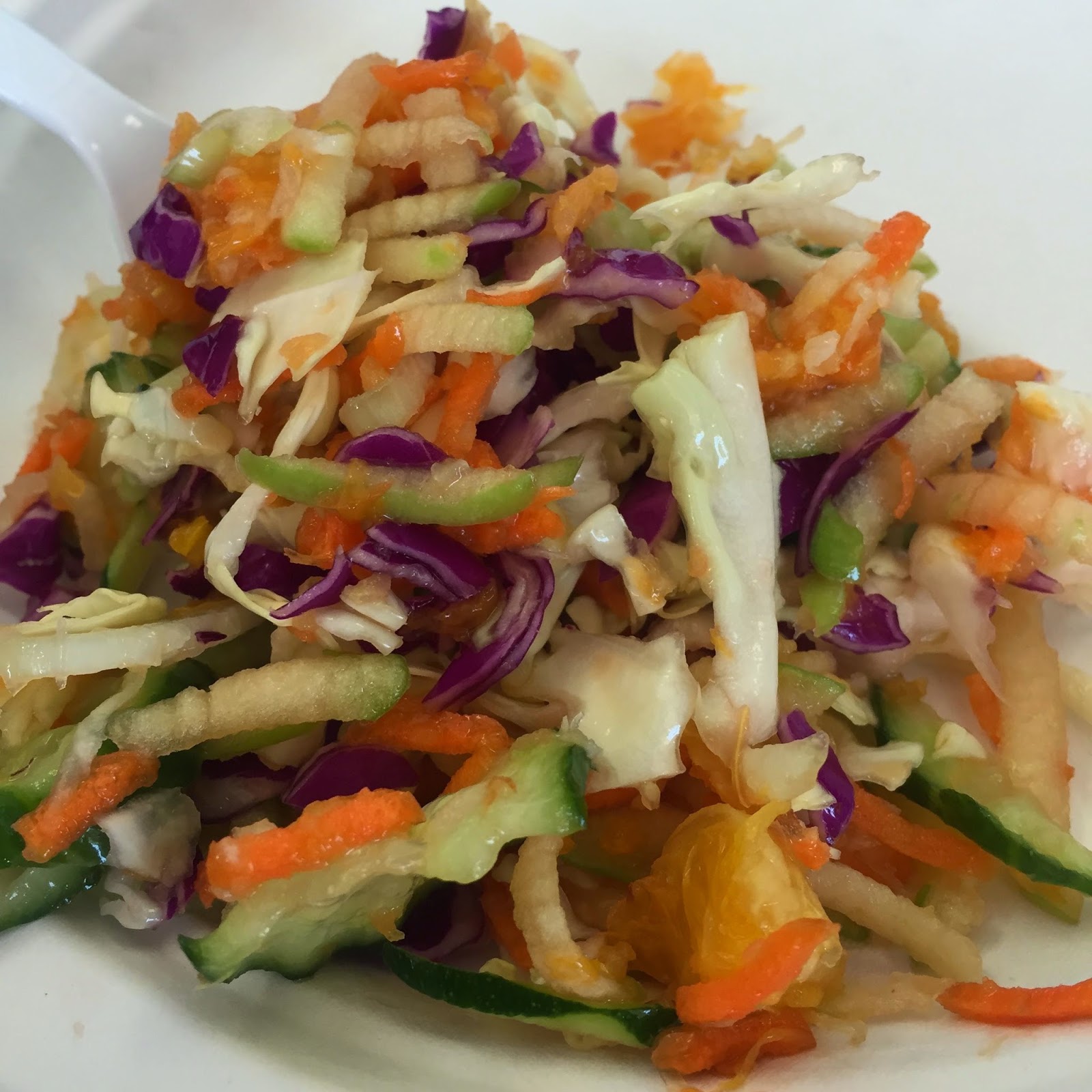 now, with all of the other crunchy ingredients in that salad, i actually didn't even notice the apple.  i honestly just kept shoveling it into my mouth as fast as i could get away with, just to get it over with. finally, all that was left on my plate were those few pieces of pulpy orange, and i would've totally left it there had i not looked around and noticed that everyone else's plates were completely empty.  i kind wanted to cry, but instead i sucked it up and ate it.  and then i wanted to cry again, because the texture of oranges is just WRONG.  ew.  vom.  yuck.  gag.

by the time i was done choking down that orange, the main course was done.  she lifted the lid to stir it up, and i had to say, it did smell good.  everyone received a generous serving, and it looked like this: 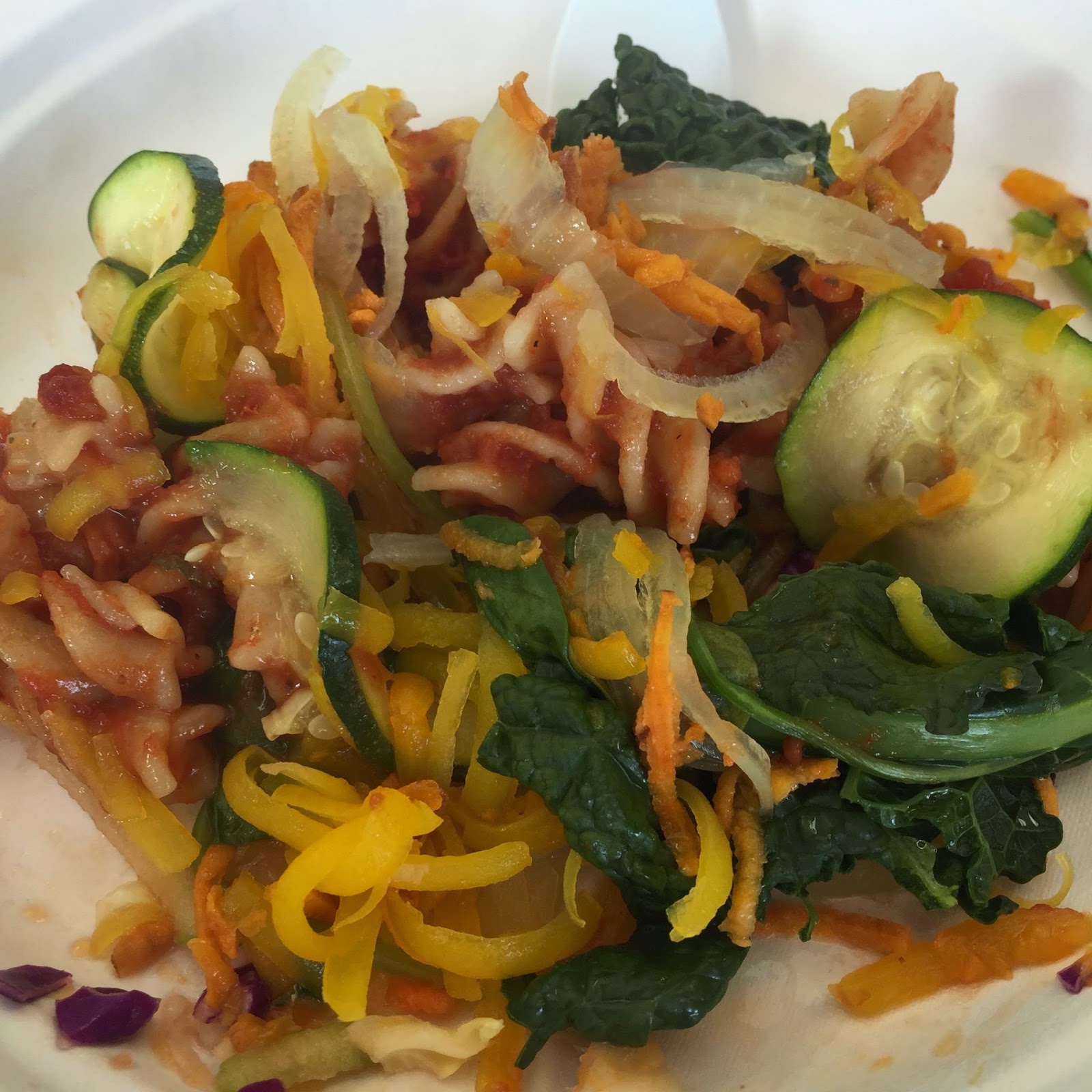 i didn't have much trouble eating it all gone.  it was nice and warm and comforting, and soon enough my plate looked like this: 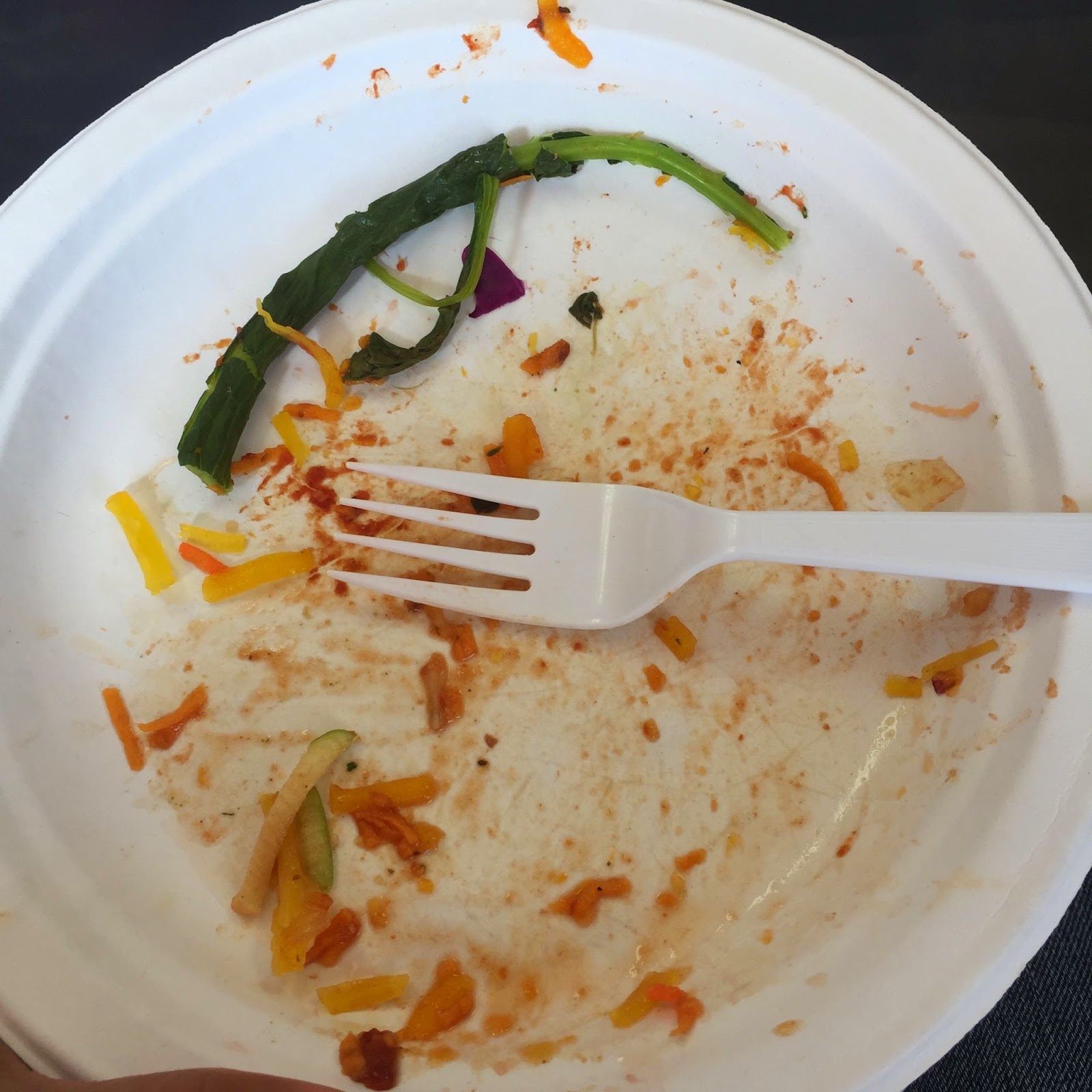 happily, there was even dessert!  this is an all-natural, gluten-free, sugar-free chocolate cake straight from the challenge manual: 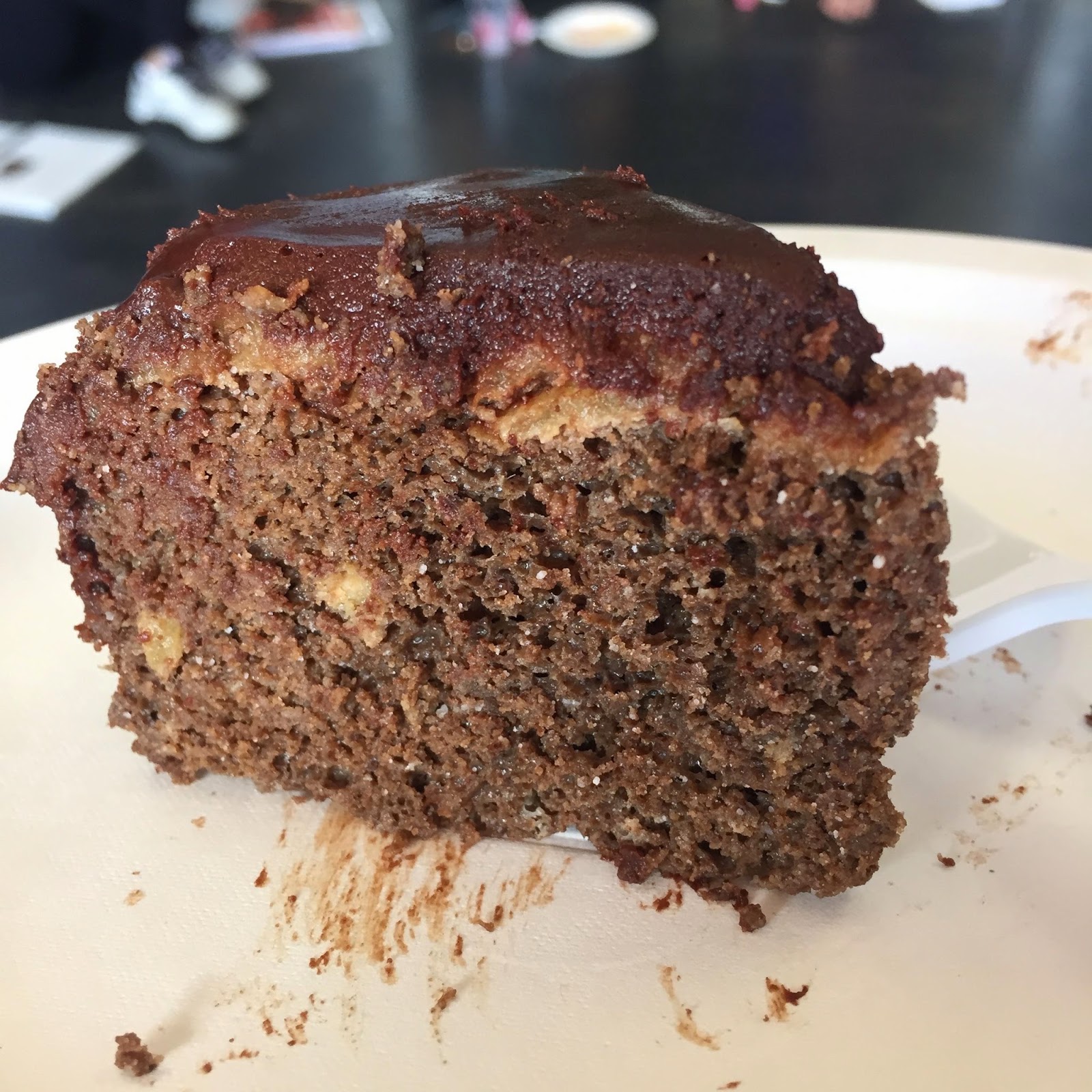 despite the horrors i'd endured involving that salad, i headed right over to trader joe's to stock up on smoothie and juicing supplies.  i'm still super amused that this cart actually belonged to me: 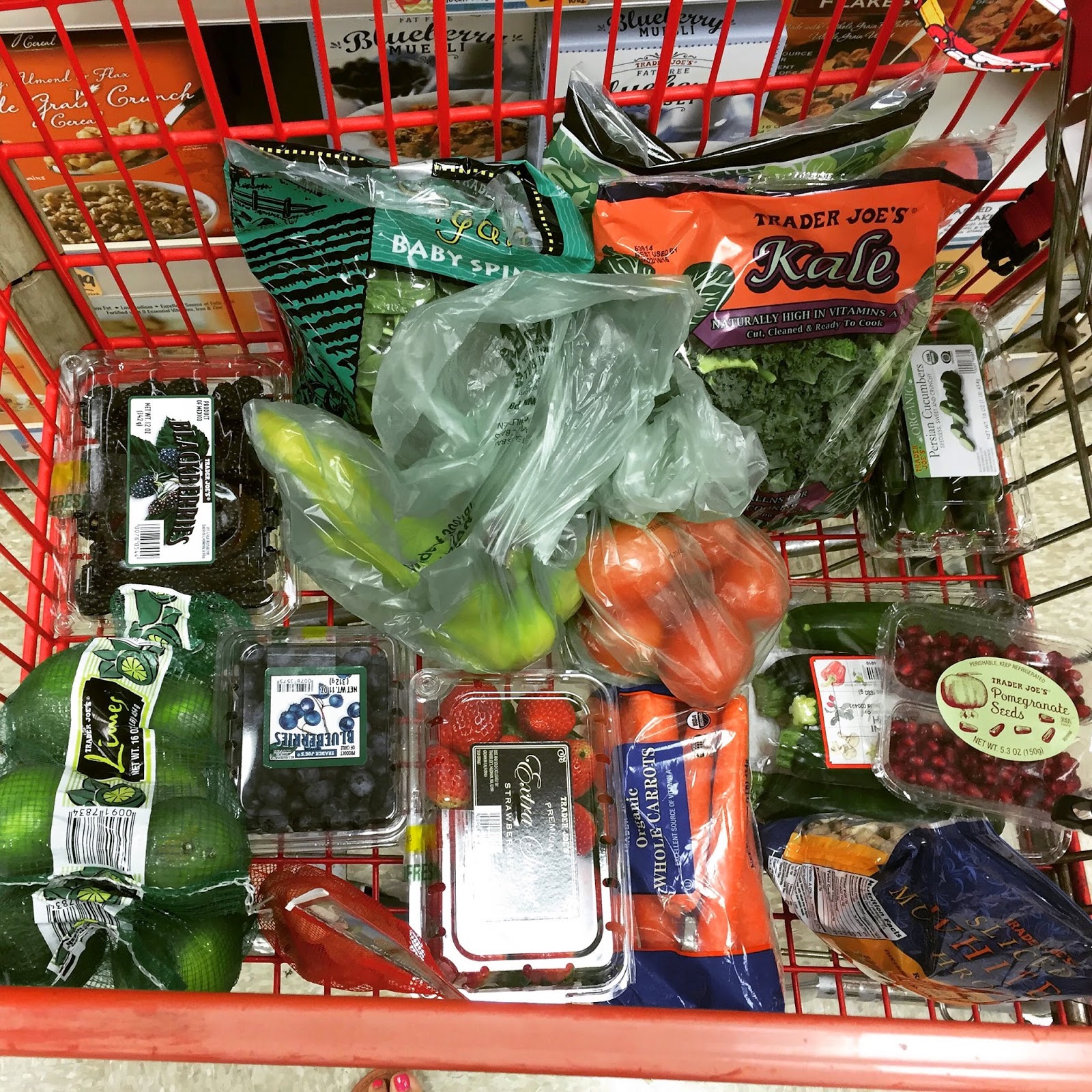 speaking of juices, that's pretty much all that goes into my in-n-out and starbucks cups anymore: 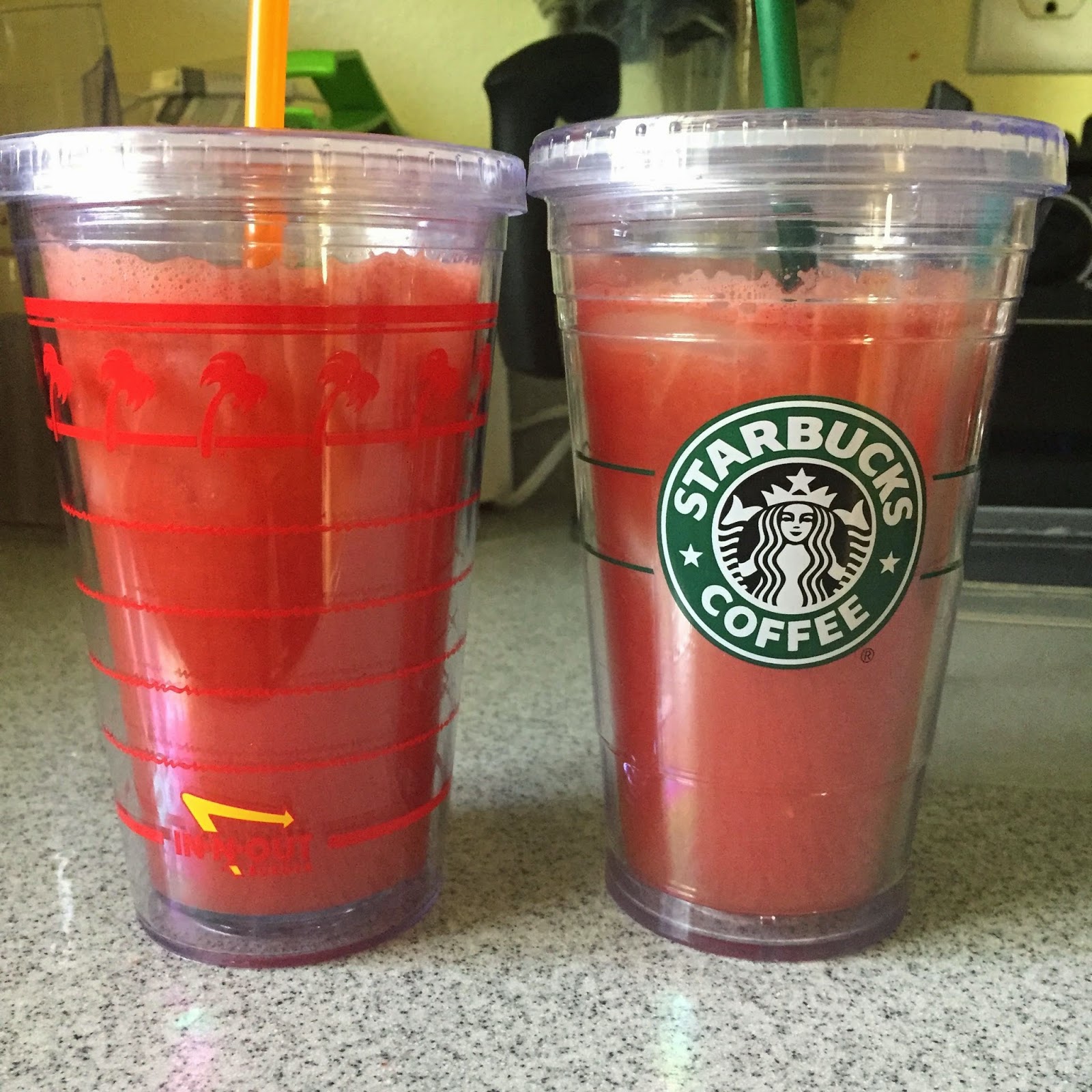 at least it's super tasty.  that's a lime/watermelon/coconut water concoction there, with a little organic raw honey mixed in.

and then there's the smoothies, which i'm having fun experimenting with.  like this one, with peanut butter and cacao powder: 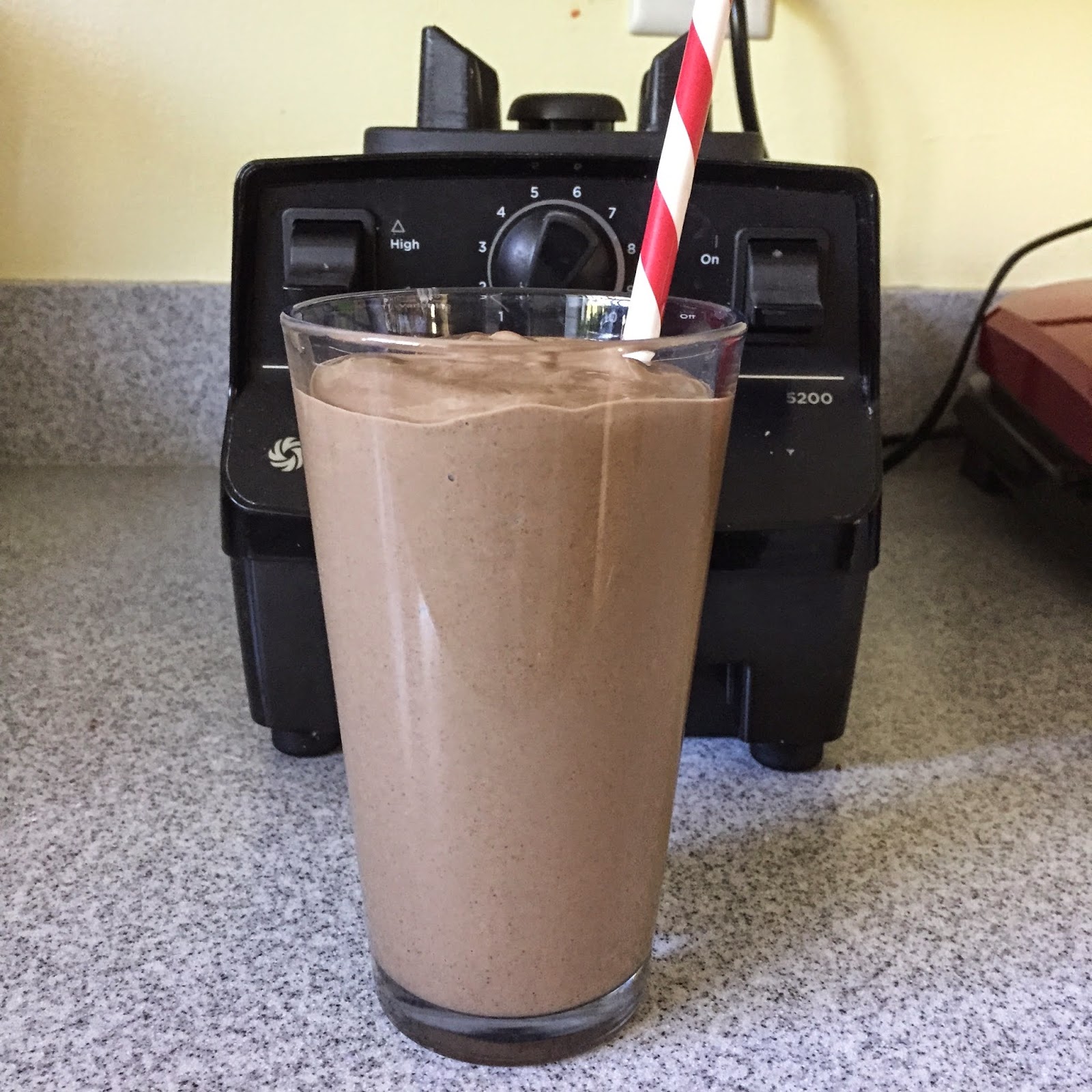 it's also got oatmeal, chia seeds, flaxseed, a banana and a handful of spinach in it.  the oatmeal makes it extra filling, which is good for me because i'm usually still hungry after one of the hub's smoothies. i guess that rather defeats the purpose, yeah?

as for dinners, i'm still working on creativity.  more often than not, it's a grilled protein of some sort with brown rice.  like in this case, it was salmon seasoned with lemon pepper and sea salt: 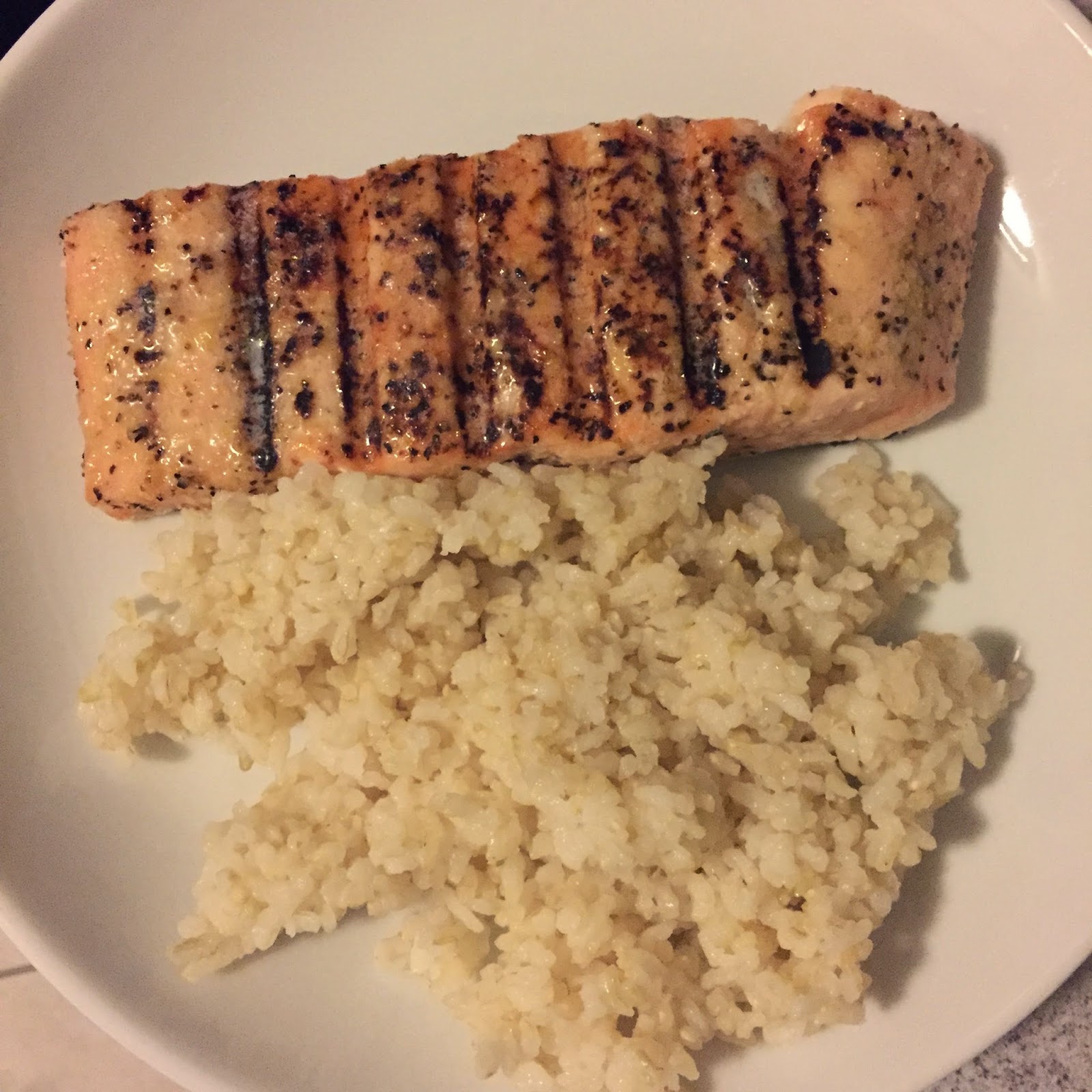 but that is no ordinary salmon, people.  nope.  in fact, that right there is some magical shit that has turned the bean into a salmon lover.  i'm serious.  she looked over at me and said "hey, whatcha eating?" and when i offered her a piece, i was floored when she first accepted and then completely fell in love with it.  and now, it's become her favorite thing to eat.  i'm still in shock, but i'm pretty much elated.  although that night, a little less so because she ate the whole thing, leaving me scrounging in the kitchen for something to eat.

here's another night's dinner that went over really well - roast chicken with tomato rice and sautéed asparagus and mushrooms with a little crispy prosciutto.  well, okay, the latter part wasn't appealing to the bean, but the hub and i hoovered it up like there was no tomorrow. 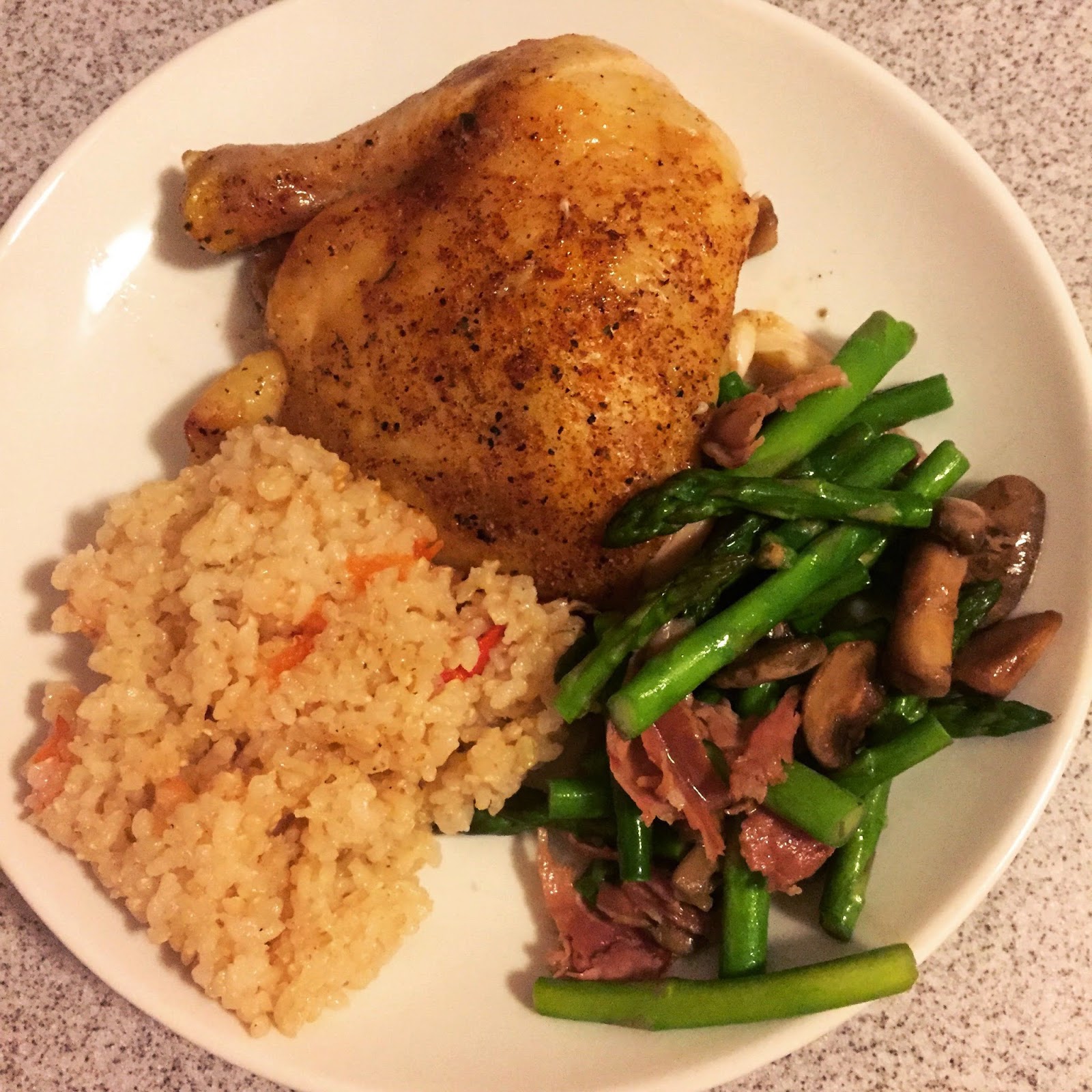 that chicken, by the way, was cooked in the crock pot.  can you believe it?  after sprinkling the whole chicken with a seasoning rub, it sat on a bed of balled-up aluminum foil that kept it above the inch or so of water at the bottom of the crock pot.  first it cooked on high for two hours, then turned down to low for five more hours.  it came out beautifully - tender, seasoned, delicious.  and so easy!  i'm definitely adding that to the rotation.

the teen and i have become fans of omelettes for breakfast - one whole egg plus two whites, with some sautéed spinach and prosciutto and a little cheese.  i like to add mushrooms to mine, too.  a little fungus won't kill ya.  well, unless you're allergic.  if that's the case, don't add the mushrooms. 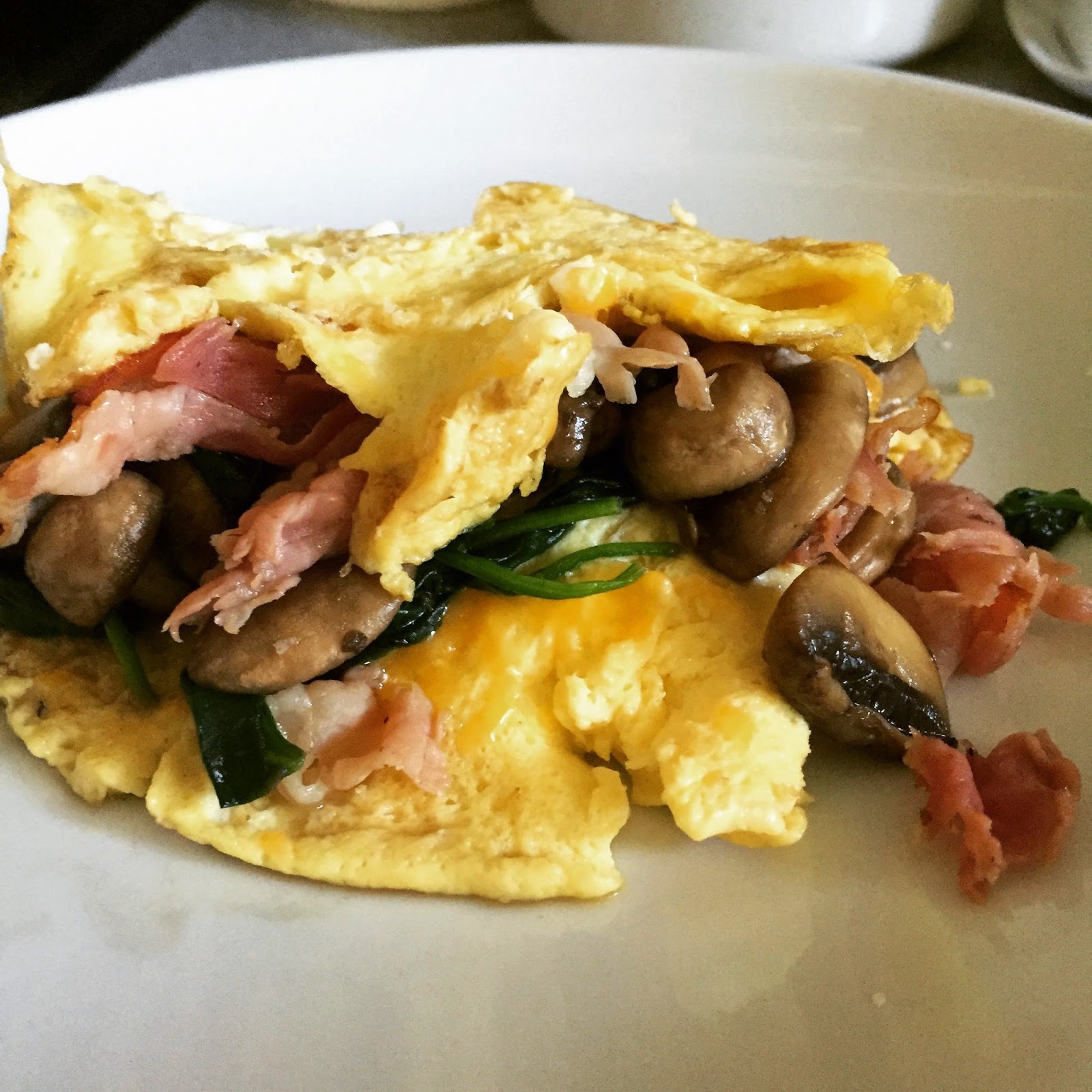 and an old standby - homemade spaghetti sauce.  i usually mix in cooked ground beef, but in the spirit of keeping things healthy (and at the request of the teen, who doesn't love beef) i switched to ground turkey.  served with organic noodles, it totally fits in with the clean eating regime. 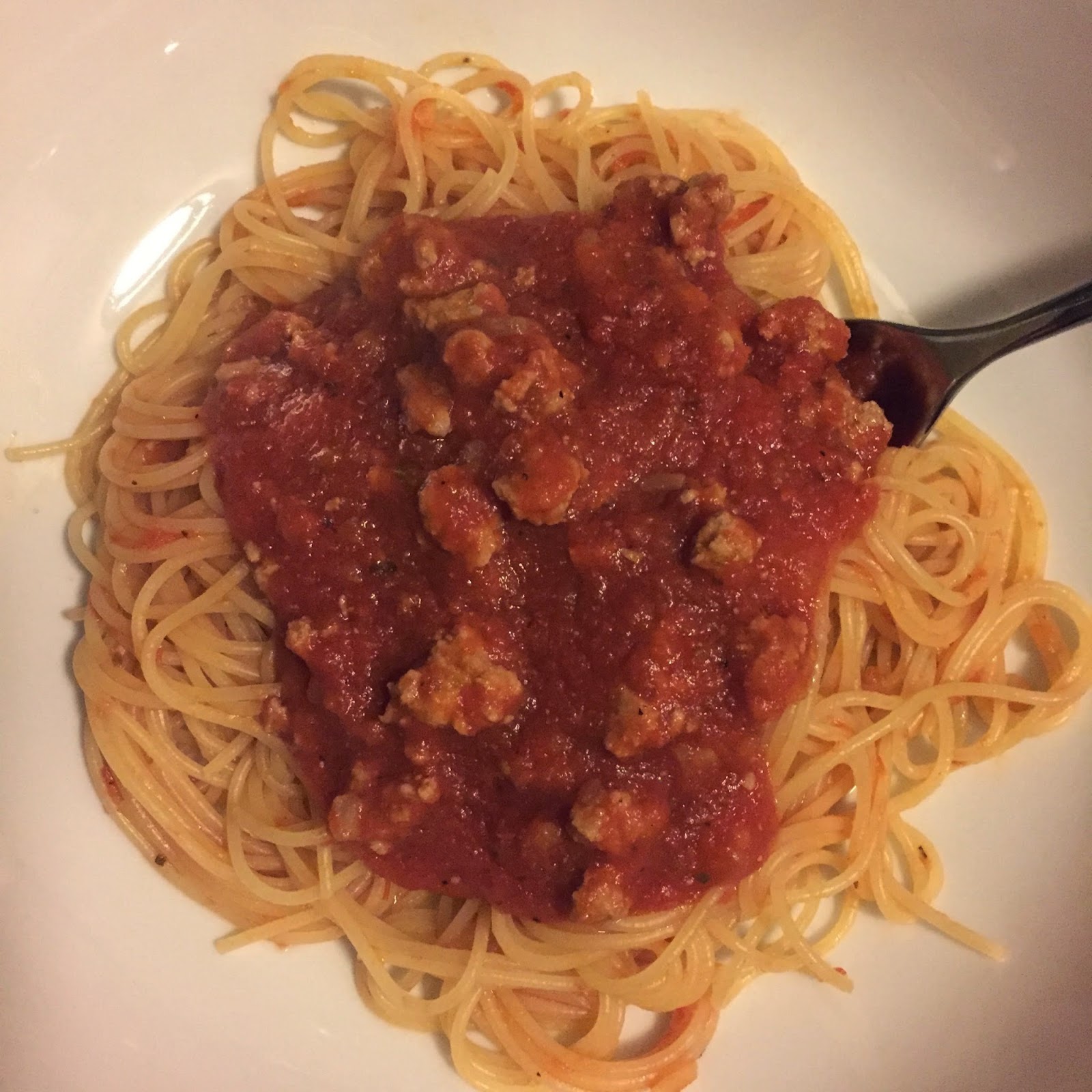 cooking ground turkey is a little off-putting, though.  that shit looks like cat food.  thank goodness the sauce disguises it quite nicely.

and here's what passes for dessert these days - zucchini bread.  it's also become a bean favorite. 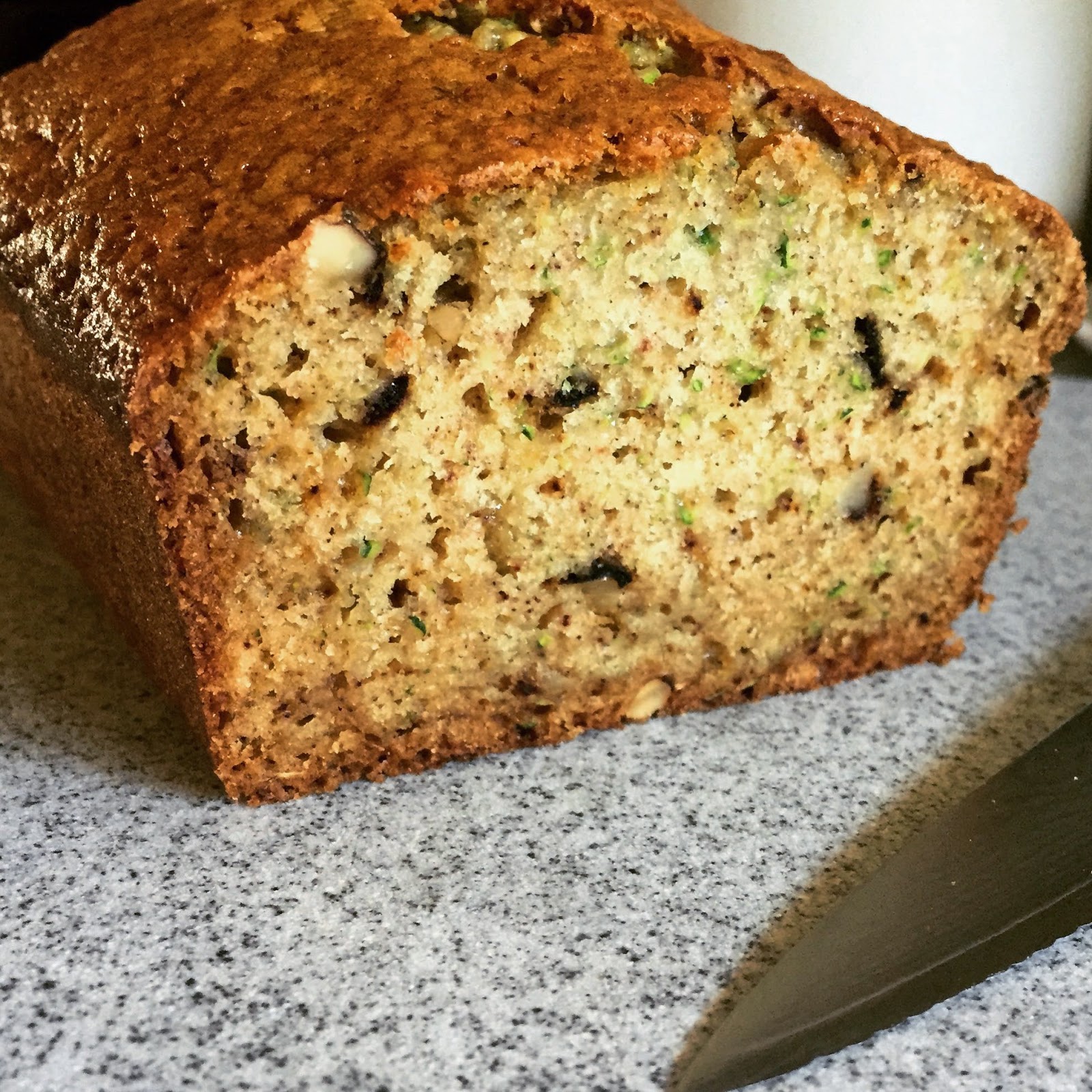 all of these dietary changes has really brought the adventurer out of her, which we're really enjoying.  it's pretty awesome that she's been more open to trying new things, and slowly but surely i'm adding to the list of things that i can make where i don't have to hide what goes in them anymore.  and seeing a little green in her food is getting less squicky for her.

it's happening, you guys!  we're crossing over to the healthy side of things!  and guess what else - i'm down three pounds from weigh-in day.  this shit is paying off!  it's amazing!
at February 11, 2015