out with the old, in with the new

okay, so this challenge business has truly taken over my life.  i'm finding myself hitting up the local health food store on a very regular basis, usually to pick up super obscure ingredients to try out a recipe i found on the xtend challenge facebook page.  it's really crazy, but kind of fun and really interesting to see how things work together to create some pretty delicious eats.

this time, it was a recipe for something called "life changing bread."  now, i'm all about some soft, fresh, delicious bread.  but that stuff is usually made with not-so-good-for-you, super-processed white flour and sugar.  don't get me wrong - i've definitely eaten my share (and more) of very, very unhealthy food.  and i'm sure that after this challenge is over, some of it will creep its way back into my belly.  although i must say, i'm pretty happy about this kick in the ass to cut out junk and coffee.  i actually do feel better, and even my skin is reacting happily to it.  yay for no pimples!

anyway, back to the bread.  it sounded interesting, and the comments on the post were mostly favorable.  and so i decided to go for it.  here's the ingredients: 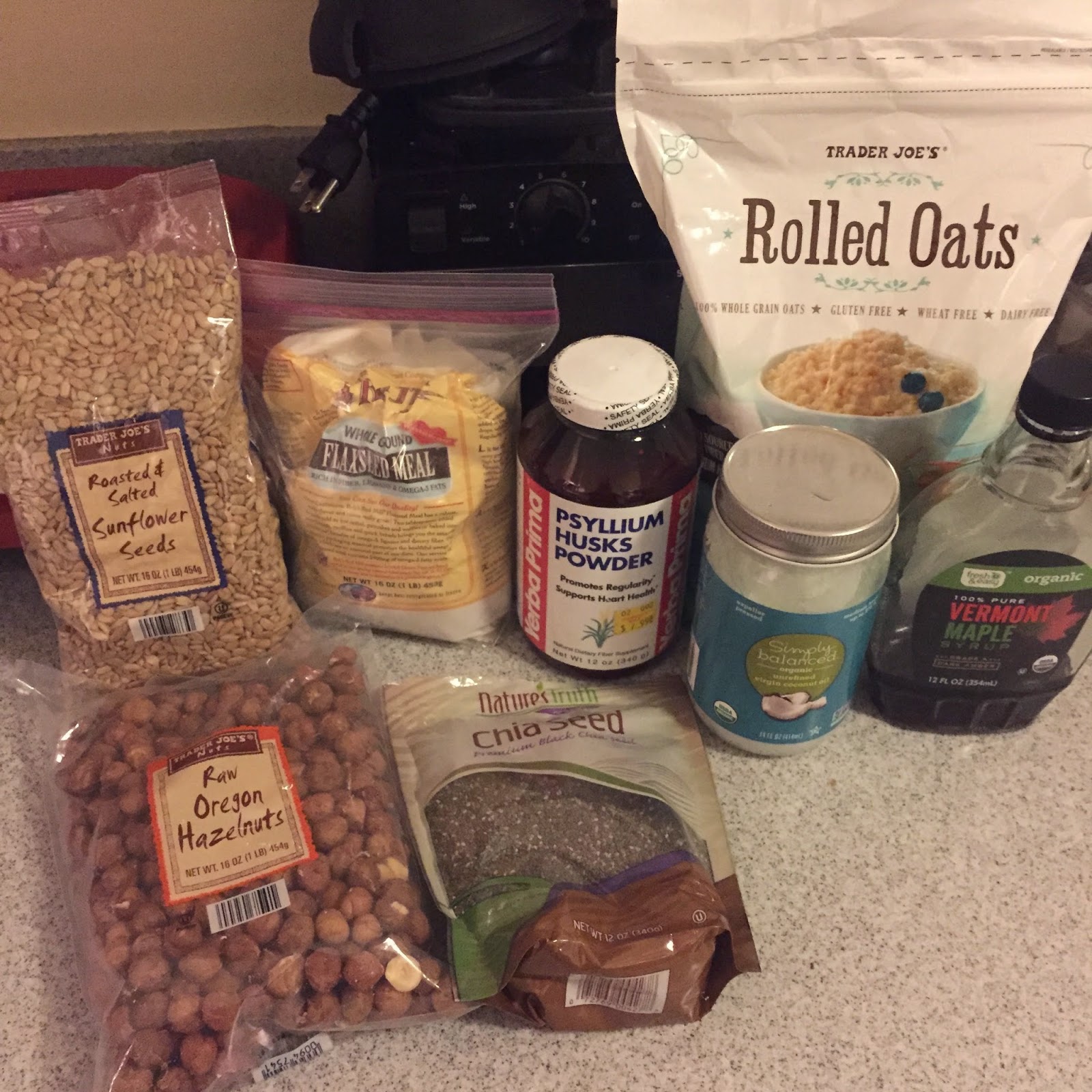 so, most of that stuff is pretty normal, right?  except for that jar right in the center - like, what the hell is psyllium husks powder?  well, apparently, it's some crazy absorbent fiber that's normally found in most laxatives.  and for this recipe, it takes the place of flour for the purpose of binding all of the ingredients together to make the bread.  and hey, a little TMI: all of the added fruits and veggies in my diet have made things very, very regular 'round these parts.  it's been very...pootastic.  and i was thinking that eating this bread would contribute even more to that regularity (now that post title makes sense, yes?).  heh.

looking at the ingredients in the bowl, i could tell right away that this stuff is definitely...healthy. 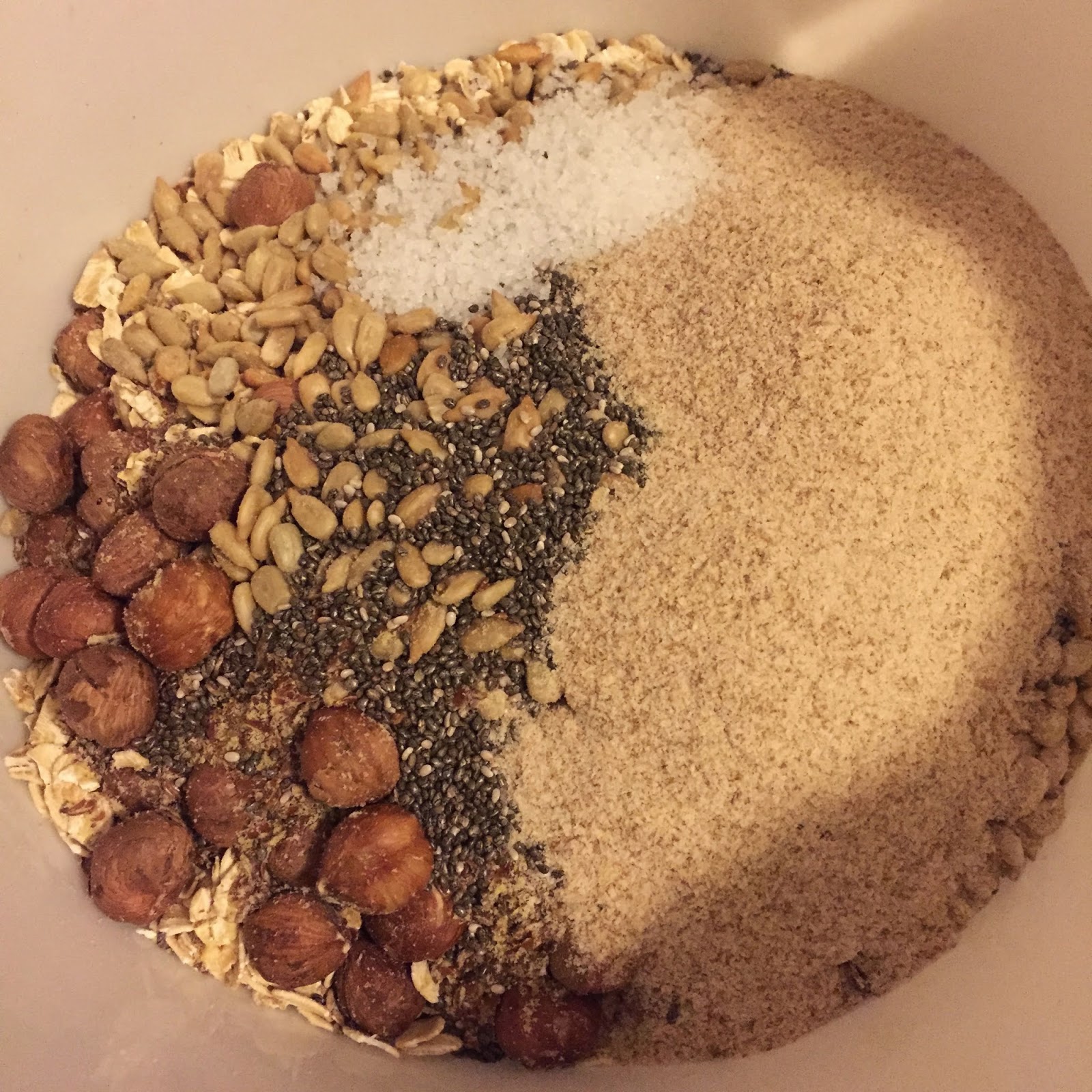 and when i mixed in the liquids, it looked like this: 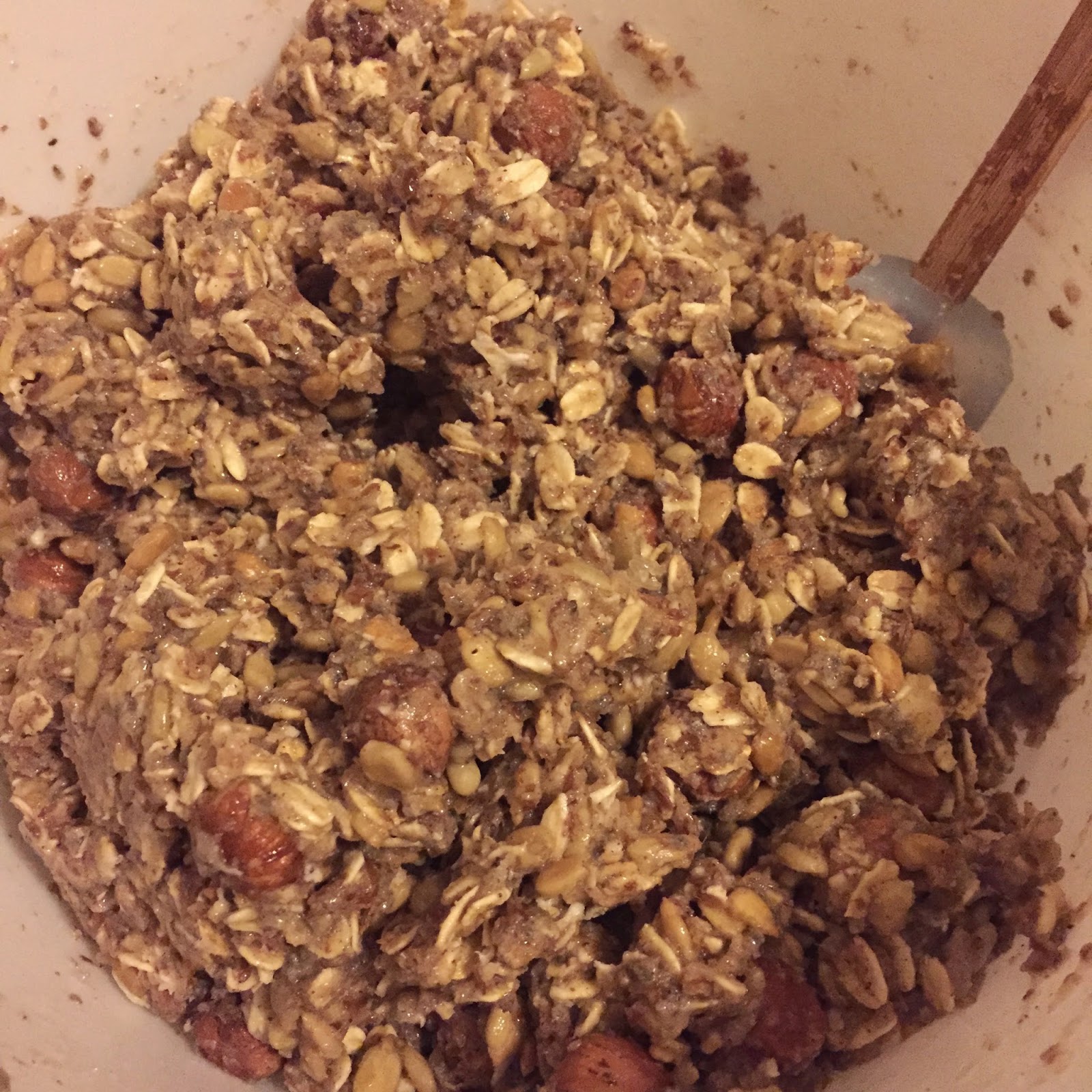 looks kind of like granola, yeah?  not too scary.

i packed it all into a loaf pan, covered it up and left it to sit overnight, per the directions.  the next morning, it went into the oven and when it was all done, came out like this: 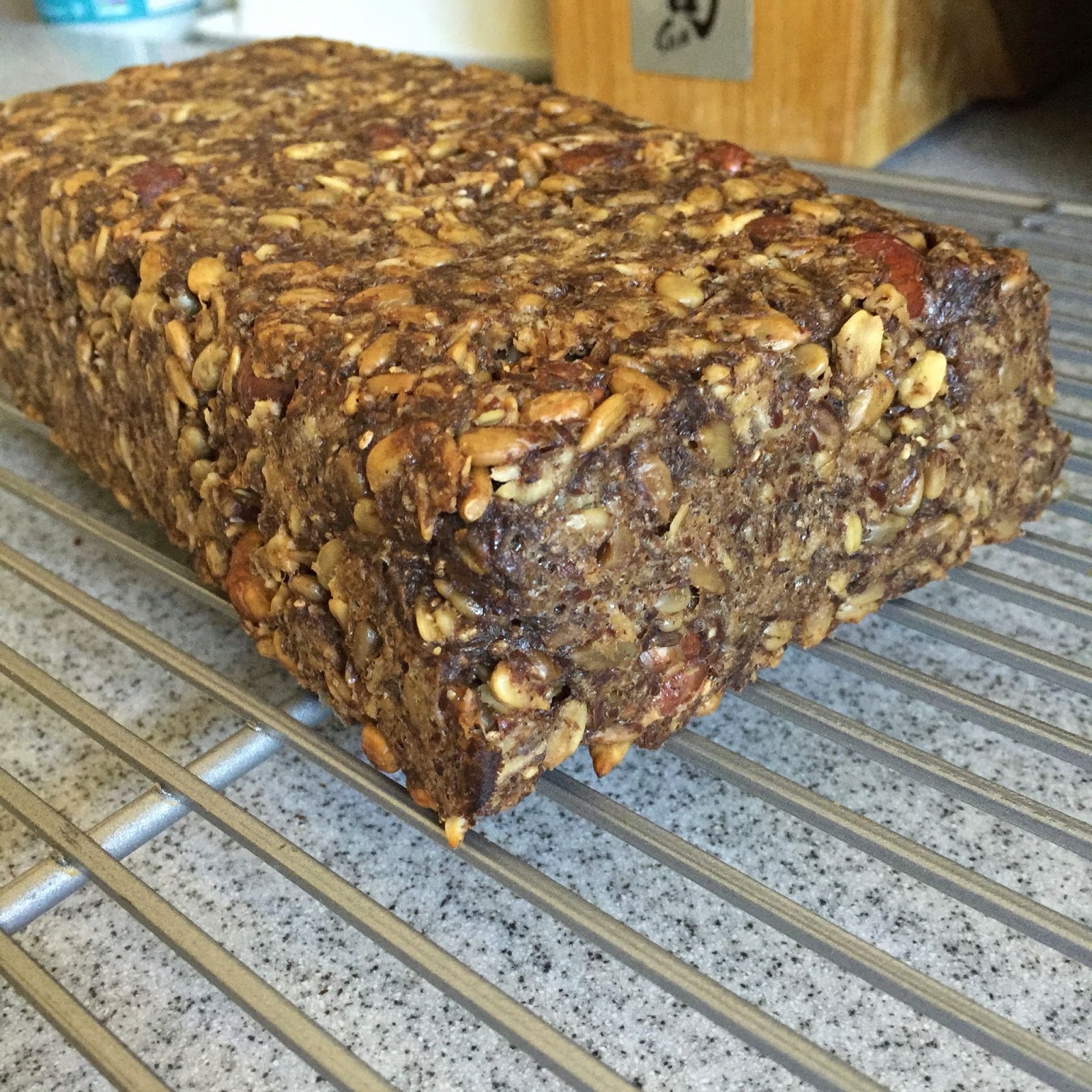 after it was completely cooled, i sliced some of that bad boy up and smeared a little natural peanut butter on it.  with a glass of freshly pressed juice, it made for a nice-looking mid-morning snack. 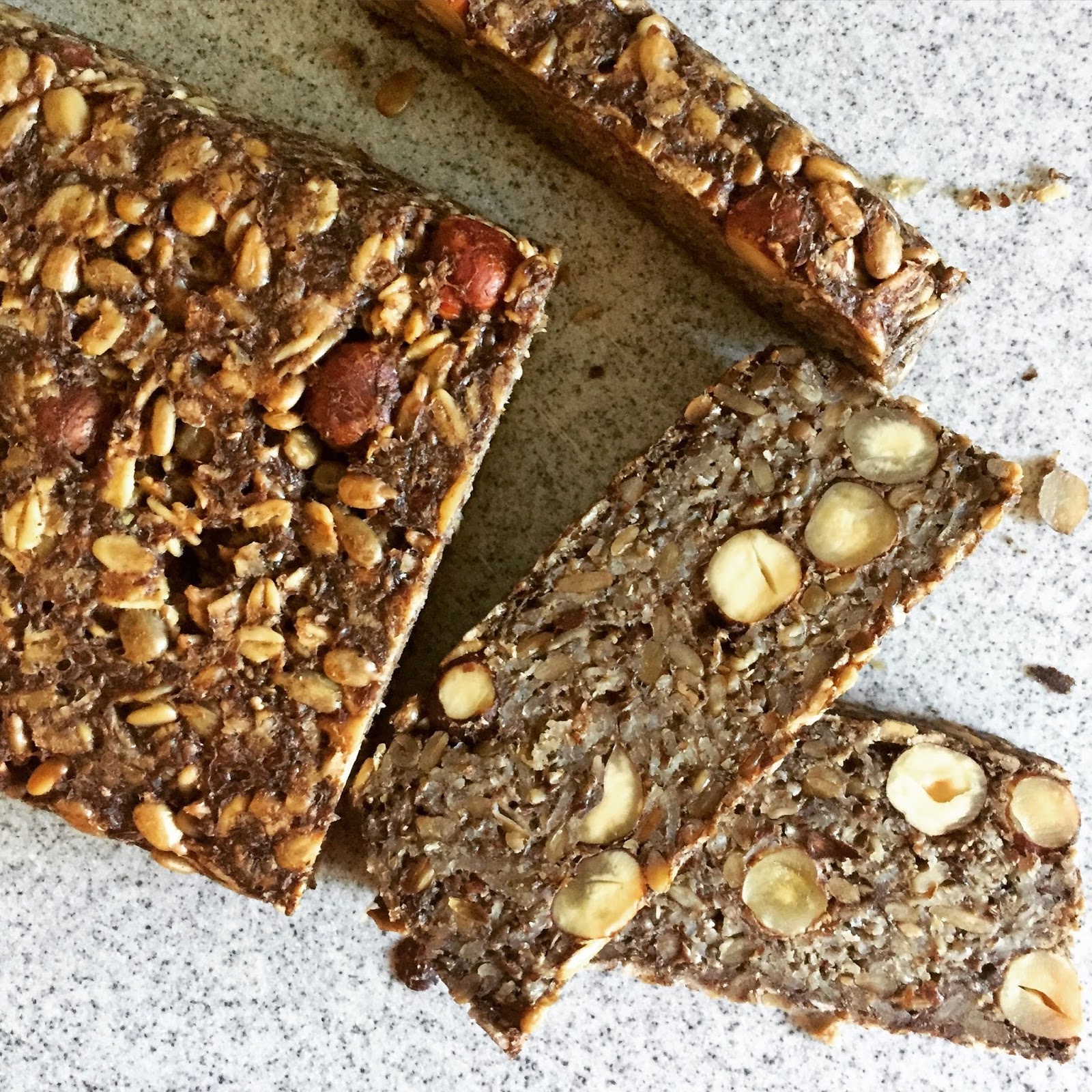 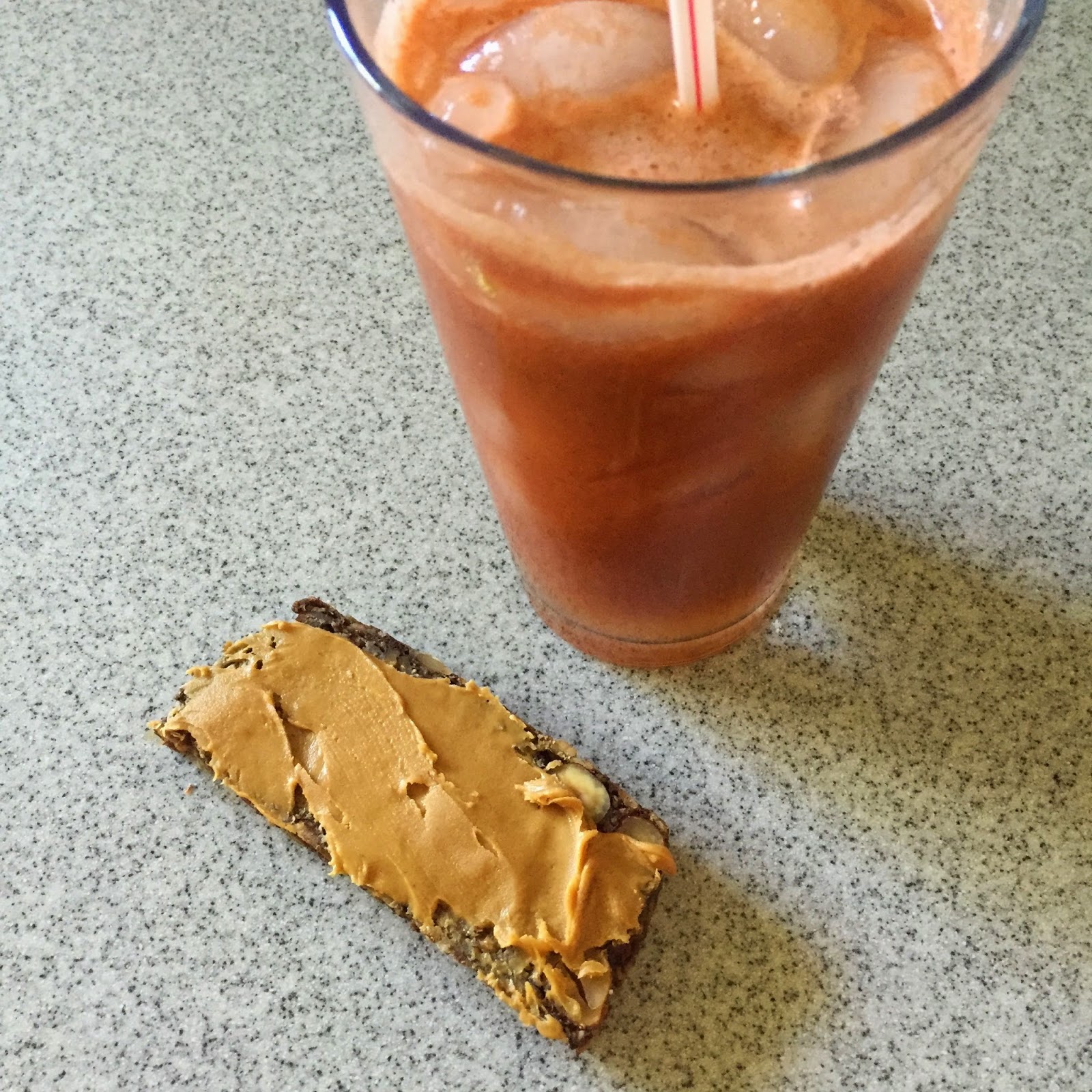 i'm not gonna lie - when it was finally time to take a bite, i was a little scared.  haha!  but i finally sucked it up and dug in, and i was pleasantly surprised to find that it was actually pretty good.  full of hazelnuts (yum) and sunflower seeds (also yum), it was soft and chewy and crunchy all at the same time.  in contrast, the teen took one bite and almost gagged, and her sister glanced over and went right back to doing whatever she was doing at the time.  but i was pretty happy with it, and decided that next time, i'd toast it a little and smear a teeny bit of butter on top.

except that a few hours later, i noticed that i was breaking out into an uncomfortable rash on my upper lip.  this happens to me now and then, and it's never a good sign.  i had to rack my brain for what could have caused it, and it took me a little while to narrow it down.  everything else i'd been eating hadn't caused any kind of reaction at all - fruits, vegetables, nuts.

it's gotta be that stupid ass psyllium husks powder.  bah!  it was the only new thing i'd eaten.  and now i have an entire jar of that crap, and i don't think i can take it back to the store.  plus, the recipe says there's no substitute for it.  not to mention, i ended up having to throw the rest of the bread out.  so, so bummed.

i guess it was a good thing i wasn't relying on it for a colon cleanse, huh?  hahahahahahahahahaha.
at February 16, 2015