who doesn't love a challenge?

i'm such a sucker for those challenges at xtend barre.  i don't know what it is, but when they announce another one, that competitive only child syndrome kicks in and that determination builds up in me like mad.  june brought a "take 20 classes in 30 days" challenge, and while i had my doubts about being able to swing it - that's only 10 days off, and the studio isn't open on sundays - i sucked it up, grabbed a punch card and put my name on the list. 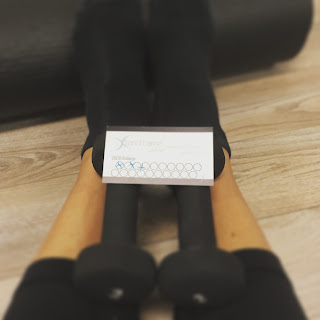 the final full week of june saw me in class for six days in a row, plus two more that took me to the very last day of the month.  but guess what...i made it! 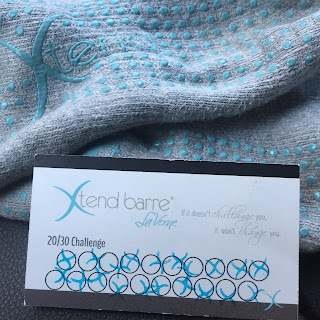 a couple of days ago, this landed in my inbox. 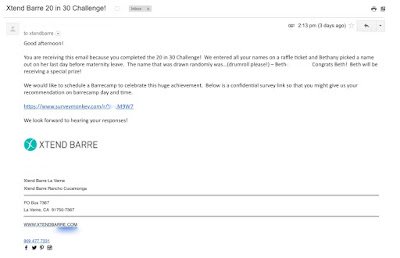 i was one of only seven who completed the challenge?  this surprised me, because i'd seen the list of folks who signed up and it filled an entire page.  but summer is a little nutty when it comes to schedules, what with kids being out of school and vacations and everything.  hell, i wouldn't have been able to even get halfway through had the bean not been in summer school.  in any case, i was proud of myself for getting 'er done.

and now this is happening: 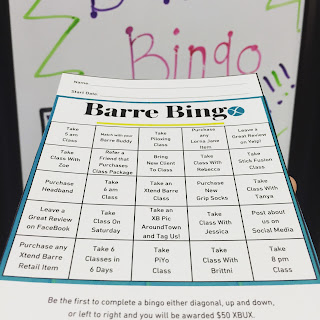 i hear that if you black out the entire card, you're entered in a raffle for something good.  and a few other folks have already completed a bingo.  but there are a good handful of tasks on that card that i know i'm not going to do, like taking an 8pm class.  i've done that, and it's not fun - i don't love waiting all day to work out, and then i can't get to sleep for hours afterwards.  and "take 6 classes in 6 days"??  um, i just did that.  it's not gonna happen anytime soon.