one of the old lady's all-time favorite movies is "back to the future."  so when we saw that the hollywood bowl was going to do a screening to celebrate its 30th anniversary (WUT) with a live orchestra playing the soundtrack, we bought tickets as soon as they went on sale.

as we've always done in the past, we hit up the shuttle that picks up in arcadia.  it's the only way to go to the bowl - driving there and trying to deal with the stack parking that's the only option is a nightmare.  this way, we just sit back in the air-conditioned bus, relax, and hang out while we breeze through the traffic and get dropped off right in front. 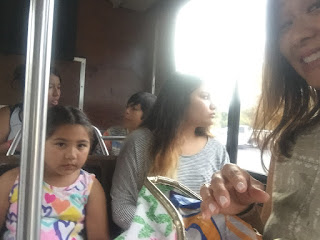 it was an odd day, weather-wise.  out of nowhere, between being butt ass hot and humid as all hell, we were getting gigantic raindrops that dried as soon as they hit the ground.  while i don't really mind the rain, the hollywood bowl doesn't allow umbrellas and i wasn't really all about sitting on a wooden bench in the rain, with both girls and opening up the possibility of getting sick.  meh.  luckily, the rain didn't follow us to hollywood, and when we arrived it was still warm and humid, but no more drops. 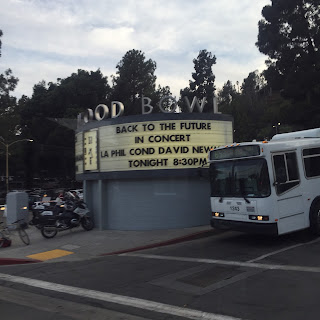 one of the deloreans was on display as we got off the bus.  obviously, it was quite popular with the crowd. 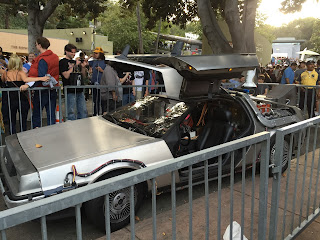 if you look really closely in the middle of this shot, you'll catch a glimpse of that fabulous 4x4 truck that marty was so excited to find in his garage at the end of the movie. 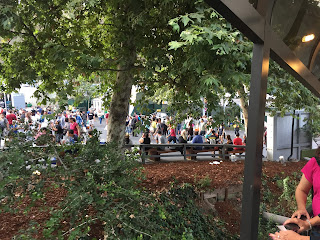 the bean has only seen parts of the movie here and there.  she wasn't all that excited about this outing, but she put her game face on and followed along. 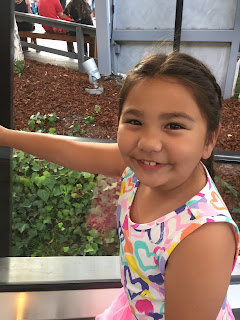 she was pretty amused, as we all were, at the folks who came dressed in costume. 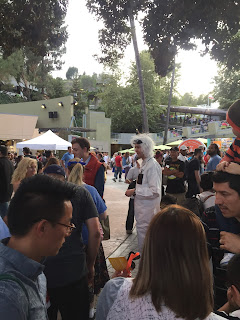 our seats were pretty easy to find and in a great spot - right in the middle of the theater.  we'd stopped to grab a few of the $1 seat cushion rentals, hoping to save our asses from going numb on the benches. 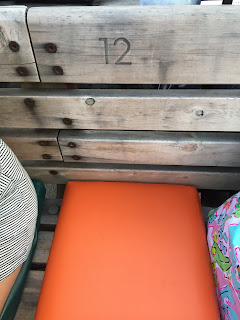 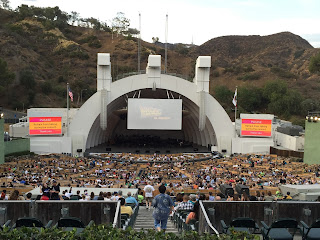 we were happy to get settled and start munching on the dinner we'd brought along - but first, let me take a selfie. 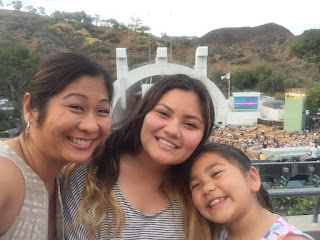 the old lady had a delicious korean bbq rice bowl, and there were poke bowls for me and the bean: 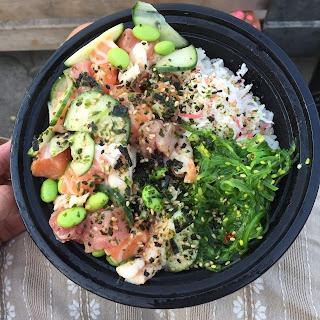 taking note of the obnoxiously loud group sitting behind us, i snapped this...just in case. 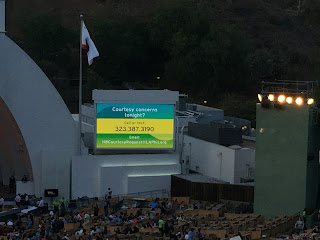 we didn't use it, although the noise didn't stop throughout the entire movie.  and then there was the family of four who arrived to take the seats next to the bean, crowding her and eventually asking me to move over because the one on the end of the bench was apparently falling off.  i explained that i didn't have any room to slide over, since there were numbered seats next to me.  "well, just move over so that we can fit on the bench and if they come to get their seats we'll move back."  grrrr.

despite the annoyances, we tried our best to sit back and enjoy the show.  after all, who doesn't love watching marty's antics with doc brown? 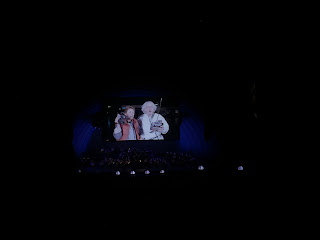 the folks holding tickets for the seats next to me did arrive, by the way, just as the movie began.  luckily, they just sat right down and didn't notice that i was encroaching upon their territory.  they were politely friendly (as much as one needs to be when sitting in close quarters on a wooden bench) and just enjoyed the evening.

it was well past the bean's bedtime when the scene faded to black halfway through the movie.  this flashed on the screen, and then the lights came up. 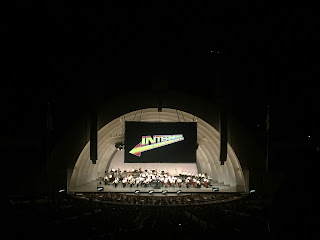 and then i looked over to find this: 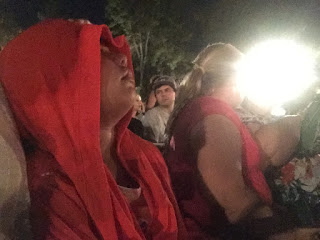 she was such a trooper, man.  she slept right through the second half of the movie despite the hooting and hollering of the audience and woke up so that she could walk down the hill to get to the shuttle.  as we made our way through the crowd, we got stuck next to some dude who had a gigantic cooler slung over his shoulder and kept weaving from side to side, nearly crashing into her several times without even noticing what he was doing. i literally shoved his ass to the side at least half a dozen times to keep him from knocking her over.  ugh.  i don't like people.

thankfully, the shuttle was easy to find and had plenty of seats when we got there.  the bean crashed for the entire ride home, and then slept some more in the car.  it was almost midnight when we got home, and having gone on a field trip to the roller skating rink earlier in the day, she was just done.

Email ThisBlogThis!Share to TwitterShare to FacebookShare to Pinterest
Labels: hollywood bowl, why you gotta be so rude