i know you've been on the edge of your seat, wondering to yourself "WHAT has she been making in that magical instant pot these days?"  it's the burning question, i'm sure of it.  right?  well, i'm here on this lovely monday to fill you right in on that.  i'm here for you, after all.

pinterest has, of course, been the source for almost all of my instant potting ideas.  what on earth did we do before pinterest came along?  bookmarks?  psh.  maybe emailed lists of links to ourselves?  hmmm.  pinterest has solved all of our website-saving problems.

aaaaanyway, one night the bean and i were hankering for something delicious.  and i, per usual, had nothing planned.  so i glanced at my "instant pot" pinterest board and found something that looked interesting - a shrimp scampi paella-type dish that would cook up in 5 minutes.

5 minutes??  sounded too good to be true.  and with stuff i already had sitting in my kitchen?  sold!  i poured the liquid into the pot, pushed the sauté button to get it warmed up, and measured and poured and stirred all of the rest of the ingredients in.  i plopped some frozen shrimp on top, put the lid on, and set the pot to cook for 5 minutes.

it always takes a little longer than the advertised cooking time to be completely done, because the timer doesn't start ticking down until the pot has reached the correct level of pressure.  but since i had the liquid boiling by the time i had everything ready to go, it didn't take too long.  maaaaaybe 10 minutes later, it was good to go.  i opened her up, stirred in some parmesan cheese, and served it up.  voila, easiest dinner ever: 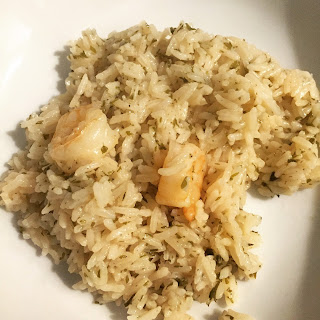 amazingly, it was delicious and we both loved it.  definitely saving that one for another night.

that one doesn't work so well when the old lady is home for dinner, since she isn't a shrimp fan.  but she does love pasta, and so i decided to try a chicken alfredo noodle recipe i'd found.  the only part that didn't work was trying to cube up frozen chicken breasts...i wasn't about to risk chopping off a finger or something for that.  so i threw it in whole, added the rest of the stuff and hoped for the best.

as i expected, the listed time wasn't enough to get the chicken cooked all the way.  and i realized that the noodles needed to be submerged in whatever liquid was in the pot in order to cook properly.  so i pulled the chicken out, cut it up into pieces, dropped it back in, added more broth and stirred it all up. about 5 more minutes under pressure and then it was done. 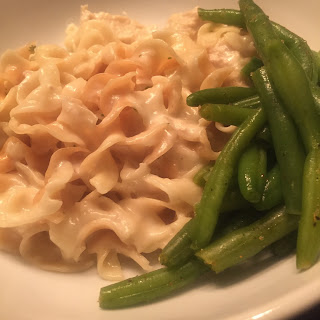 this one was actually really tasty.  i used the recipe that was given for the alfredo sauce (not a whole lot of ingredients, but better than buying a jar) and it was seasoned just right.  i don't think the hub is a huge fan of my pressure cooking escapades, but for quickie dinners during the week...well, i think it's pretty awesome.

i bought a slab of ribs at trader joe's just because they sounded good, and i knew that there were lots of folks who'd made them in the instant pot quite successfully.  i pulled up the first recipe i found and because it was so simple, i figured it was the best one to try.  not to mention, it was right from the instant pot website.  again, not a ton of ingredients: 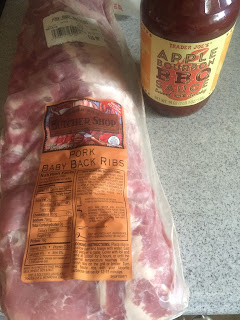 and they were done really fast.  the meat was really tender and fell right off of the bone, and it was so much better than screwing around with the oven, turning and basting and turning and basting again.  the only thing i'd do differently next time is to put an actual spice rub on the ribs, because while they were cooked perfectly, they lacked flavor in a big way.  still, slathered with bbq sauce and served with  some good ol' mac & cheese...not bad. 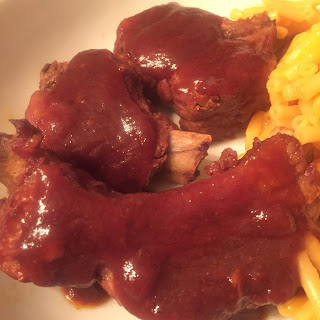 i really want to try a few sweet recipes i've found, like lemon curd and cheesecakes in a jar.  i don't really NEED to have these things in my kitchen, but with an abundance of lemons from the tree in the back yard, well...we don't want them to go to waste, do we??
at March 21, 2016