since we originally started planning the paso robles trip, one of the wives found out that she was pregnant.  so with me not being a huge wine drinker anyway and her not being able to partake at all, the hub asked me to work on finding a local day spa that we could visit instead.  with a little research via yelp, i settled on the spa central coast.  while it wasn't a resort-type spa where you can relax in robes and hang out in pools and saunas and such, they did offer reasonably priced packages.  so i made reservations for both of us and that was that.

we planned our day so that we could get a mani/pedi somewhere in the morning, meet up with the group for lunch at whatever local winery they were at, and then head to the spa.  i was a little annoyed when no one at the spa could give me a single recommendation for a good nail salon, so i turn to yelp again to find one.  the first one that popped up with a lot of great reviews was this one: 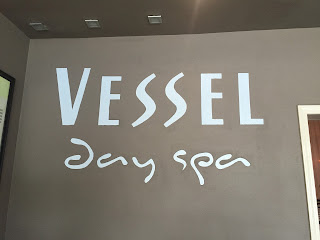 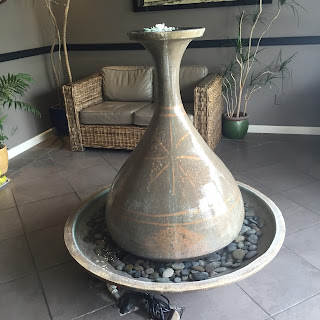 it looked really nice, but of course since it was a saturday morning they were fully booked until the afternoon.  the second place on the list was this one: 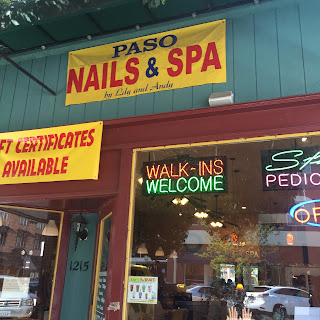 they were fairly close by and had a good number of happy customers based on the reviews, so despite the janky, cheesy exterior we decided to go for it.  it was nowhere near as nice as the first place, but they were available and we were running low on time.

i thought immediately of the bean when i spied this cute little kids' spa pedicure chair: 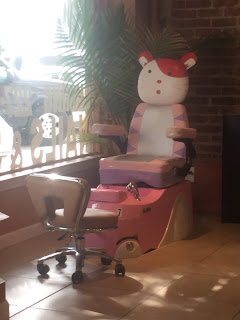 and okay, the free boba milk tea was a nice perk. 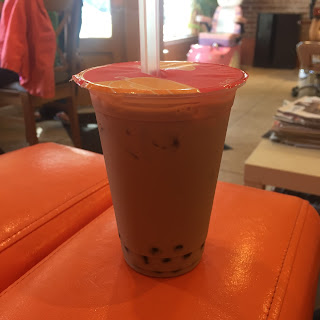 i was satisfied with my pedicure too, so i suppose it ended up being a win after all.

after a quick glance at the group's schedule, we hopped into the car and headed about ten minutes away to find them here: 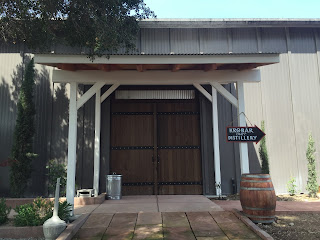 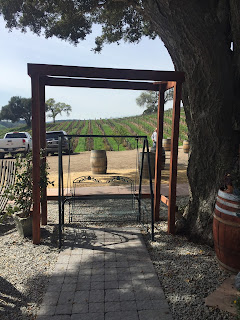 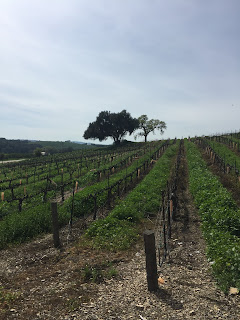 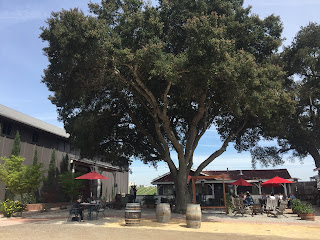 except that most of them were already done eating and ready to head to the next stop.  we got to hang out with our husbands for a few minutes while we ordered some food from the window: 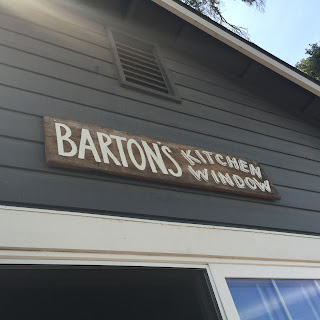 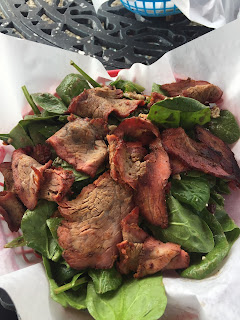 after the group left, we took a peek around the place.  it was really pretty there. 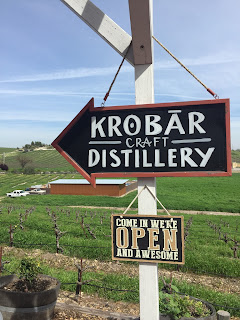 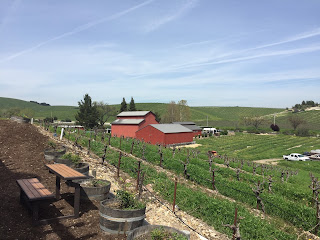 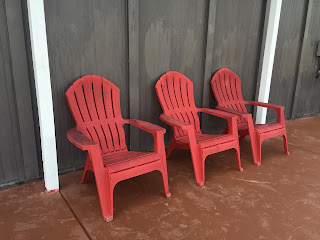 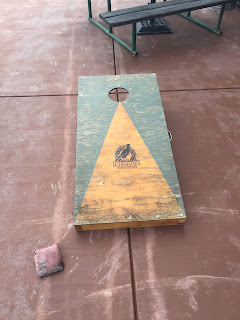 after doing a little browsing through a cute dress shop, we made our way to the spa.  we were led into the waiting area to fill out a form and wait for our therapists to pick us up: 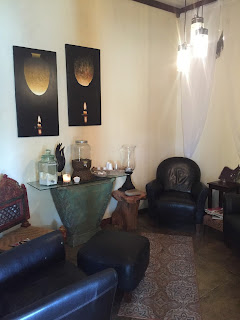 and then we were led down this hall to our rooms. 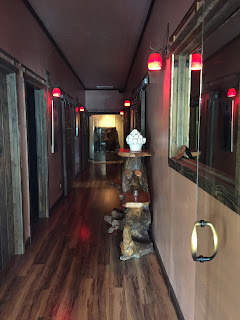 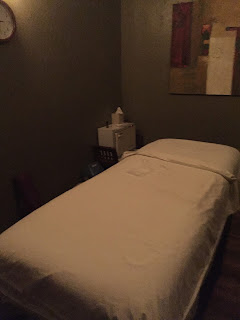 because i'd opted for a sea salt exfoliation treatment, i got to wear this.  sex-ay. 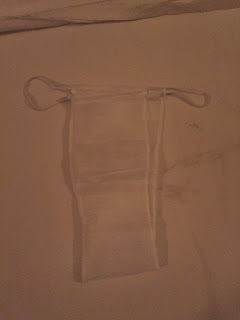 it was lovely and my skin was super soft and smooth afterwards.  the massage was lovely, as was the facial.  i was led into another room for the infrared sauna, which kind of reminded me of a coffin as i slid into it and pulled the lid over me.  now i'm not really a sauna kinda girl, because i'm not really into the idea of voluntarily entering a heat chamber.  i know, i know, good for the skin and melts fat and blah blah blah.  i don't care.  i'm not a fan.  but since i was there and it was part of the package, i gave it a shot.  i was scheduled to lay there, sweltering and sweating and literally melting away for 20 long minutes, but i only made it to about 15 before i just couldn't stand it anymore.

now that i think about it, i kinda got screwed over - that spa package was supposed to include a 30-minute spa foot treatment, and that didn't happen.  ugh.

by the time we got back to the hotel, the rest of the group was just pulling up in their party bus.  they all looked sleepy and a little tipsy, and everyone retreated to their rooms to get a little rest and sneak in a nap.  for dinner that evening, we decided to just walk over to the bbq restaurant next door.

it was really cheesy looking, and for some reason they couldn't figure out how to seat us all together despite the fact that the place was damn near empty.  so we split up into two tables, situated next to the "jail cells." 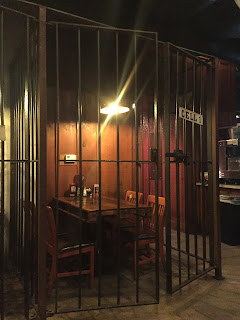 i decided to go for it and have an adult beverage - some concoction with rum, watermelon liqueur, and sweet & sour mix served in a boot. 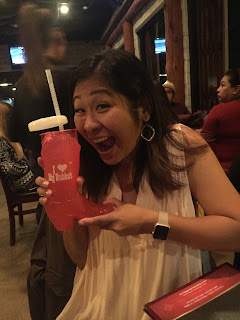 oh yeah...the place was called "big bubba's."  heh.  whatever.  i ended up getting a refill in my boot and built up a fun little buzz - which was a little anti-climactic since everyone was all done with alcohol for the day, leaving me the only one doing any drinking (aside from a few who halfheartedly ordered beers).  and then when dinner was over, we walked over to the 24-hour starbucks. 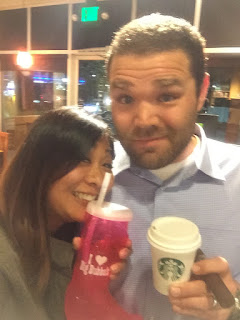 i kind of don't even remember taking this, so there you go. 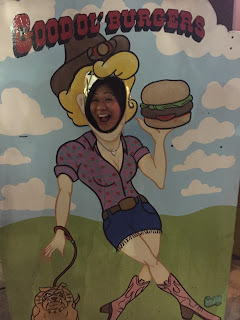 and then i went back to the room and passed out cold on the bed while the hub enjoyed a cigar with the guys by the pool.  muahahahahahaha.  i'm a terrible drunk.

Email ThisBlogThis!Share to TwitterShare to FacebookShare to Pinterest
Labels: paso robles, so not an alcoholic, wan is a spa whore