it truly is our happy place

thanks again to the magic of twitter, we were lucky enough to get in on an annual passholder-exclusive sneak preview screening of the newest disney movie, zootopia.  we decided to make a whole day of it and headed out early to ride a few rides before showtime, although we were a little startled when we pulled up to the entrance to the parking structure and saw this madness: 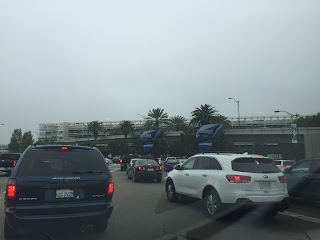 we'd never seen it that crazy busy on an early sunday morning before, but our patience was rewarded when we scored a spot right next to the escalators.  like seriously, we've never gotten parking that close before.

and although we missed the official rope drop, it was still early enough for us to head right over to tomorrowland and score some fastpasses for the ultra-popular hyperspace mountain. 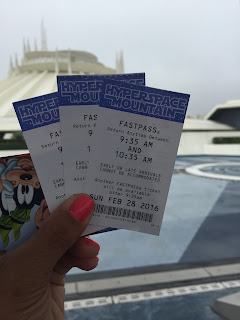 the standby line was short enough that we decided to just go ahead and make it our very first ride of the day.  it wasn't long before we were seated and ready to go: 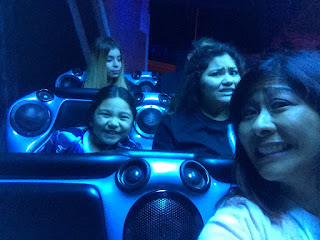 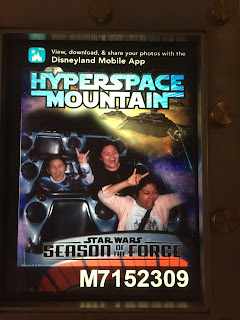 we were pretty hungry when we got off, and so we decided to hit up tomorrowland terrace for some breakfast.  i love how everything is star wars-themed in that area.  we decided to each try a different entree from the menu: 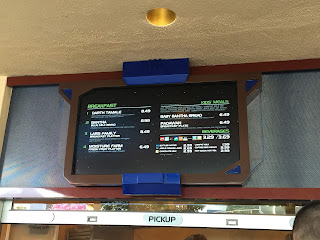 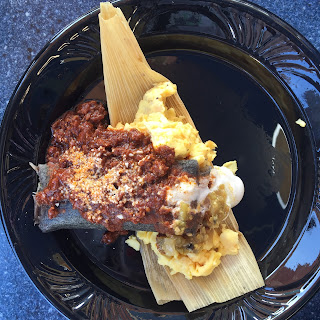 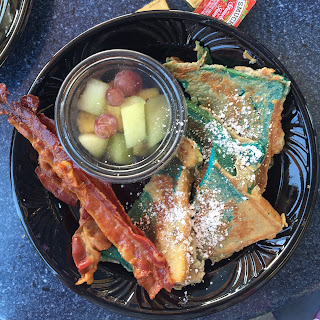 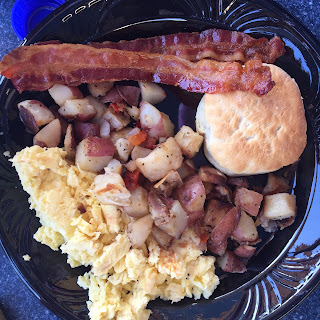 we chowed on those plates like it was our last meal, and then we hopped onto the monorail to take us to downtown disney. 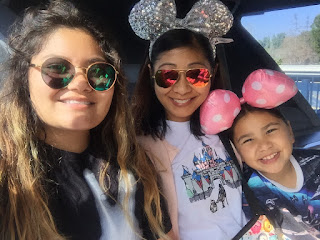 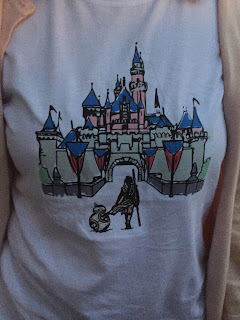 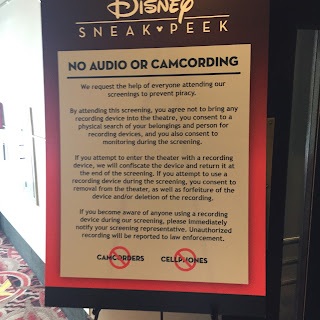 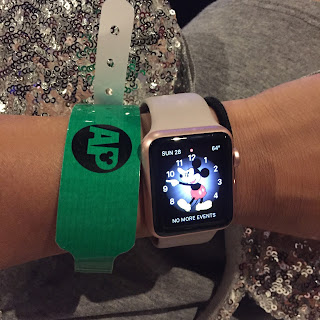 i'm not going to say anything about the movie, but i will tell you that it was super cute, you should definitely go see it, and i'm definitely going to see it again...partly because i might have dozed off in the middle of it.  oops.  it really was very entertaining, i was just really tired!  anyway, on our way out we were each handed a pair of novelty sunglasses with the movie logo on the side.

we decided to head into california adventure and check out what was available for the last day of "ap days" - a month-long event that offered various activities and giveaways to annual passholders. 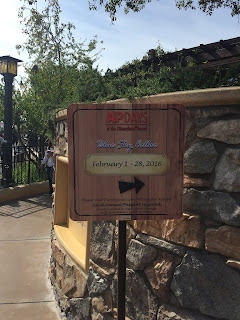 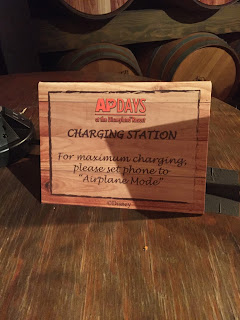 the old lady had already scooped up most of the items that were available - brochures with fun facts about the parks, various exclusive buttons, and recipe cards for some of the resort's best menu items.  the bean enjoyed the coloring station and spent a little quality time with a cast member. 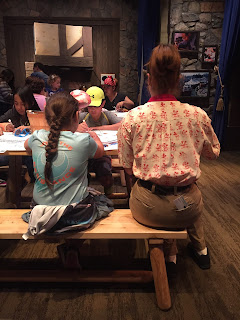 then we headed outta there and over to the hollywood studios area to check out what we could find in stage 17. 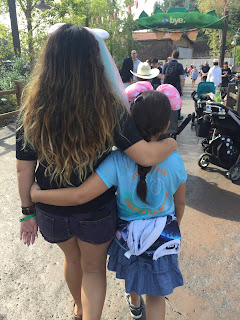 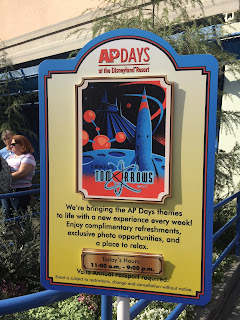 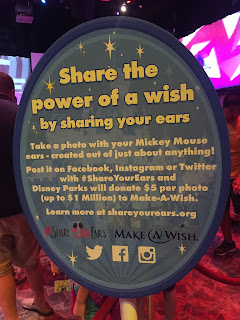 baymax was up there making a rare appearance, but by the time we got there his visit was winding down.  we settled for watching him pose with other folks and then making his way to his charging station behind a curtain. 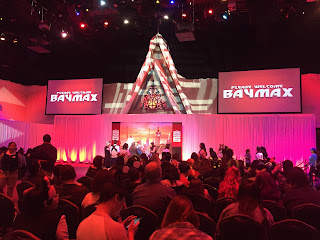 we did manage to score some free bottled water and popcorn, though. 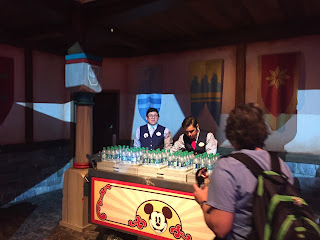 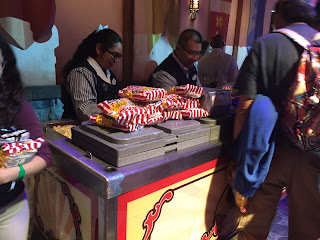 one of the last rides that the bean had yet to conquer in the parks was the very ominous, intimidating "tower of terror."  i've been convinced that it could just be one of those rides that she isn't really ready for, with the ghosts and twilight zone storyline and the drops and everything.  but she'd been watching videos that people post on youtube and asking us a bazillion questions about it over the last couple of months.  though we assured her that it wasn't a requirement and that she didn't have to ride it, she finally blurted out "i want to ride it and get it over with."  and with a 40-minute wait, we scooped up fastpasses which she clutched nervously for this photo. 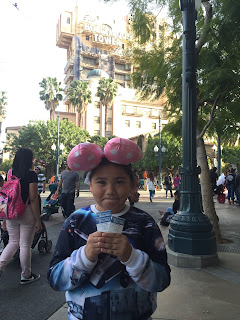 to take her mind off of it, we took her to the animation academy to do some drawing.  and by the time we were done with the class, it was time to ride.

and she loved it. 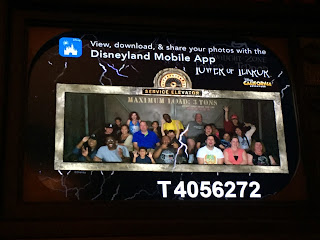 in fact, she wanted to ride it again right away.  heh.  but it was getting late, and so we decided to grab some dinner instead. 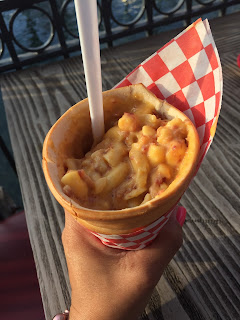 one more thing we'd been talking about for weeks was the churro funnel cake that was offered at hungry bear restaurant over in the frontierland area of disneyland.  and since we had something to celebrate, we decided to go for it.  it was...magical. 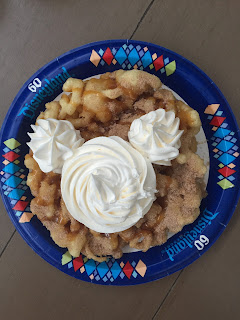 funnel cake dusted with cinnamon sugar, drizzled with caramel sauce and topped with a mickey head of whipped cream.  glorious.  and we discovered that they also offer funnel cake with a chocolate brownie topping.  something to keep in mind for next time.