it occurred to me last week that the hollywood half is coming up in just over a month.  and of course, i haven't run anything further than a 10K since the run to remember back in january.  oops.  so i realized that i've gotta get back into training mode, and so i kicked off the weekend with a quick 3-mile run. 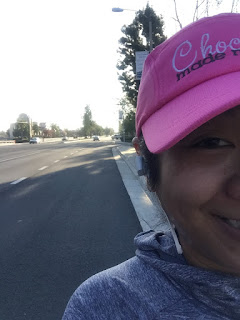 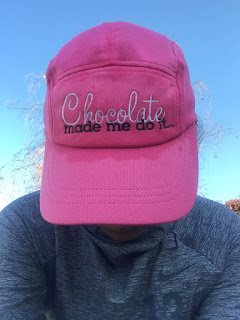 and i took those tinkerbell half shoes out for her first test run to see how i liked them in action. 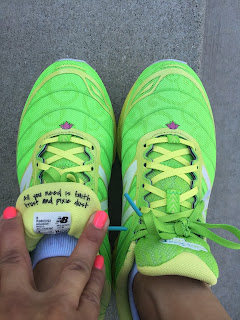 this year is the 5th annual hollywood half.  i hadn't even given it much thought, but that star wars half i ran a couple of months ago was actually the fifth anniversary of my very first half marathon!  yo, i've been running for FIVE YEARS.  that's kind of crazy.  i'm definitely not as crazed about it as i was when i first got into it, but i still run my fair share of races.  in fact, i've got a doubleheader this weekend - a 10K on saturday and another installment of the coaster run 5K at knott's berry farm on sunday.  definitely getting started on that half training, i'd say.

a couple of hours later, i found myself here, for my cousin r's baby boy's baptism. 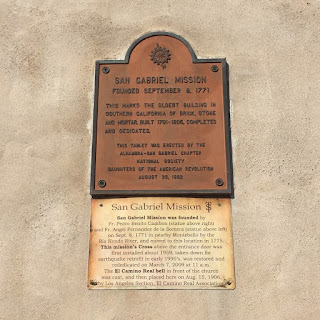 i haven't been to one of these in years, so i had no idea that they now do these en masse - they pick one day each month during which the priest will baptize all of the babies who show up.  there were maybe ten of them there that morning, and the church was packed.  i sat a few pews behind my family members and just watched and listened.  also, it's interesting to note that one can be absent from church for a really long time and still be able to recite the lord's prayer word for word. 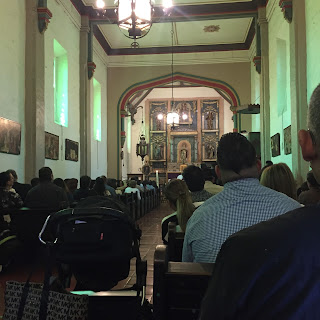 after the priest's assistant for the day mangled the baby's name up on the mic, we all headed up the aisle into the small room where the actual baptism was performed. 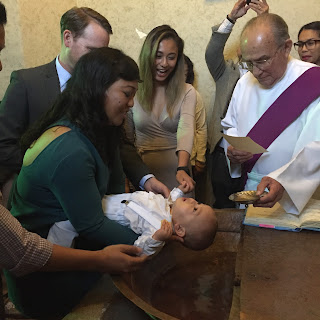 when it was all over, everyone hopped into their cars and drove the short distance to my aunt and uncle's house, where we proceeded to party all day long in celebration of both the baptism and the baby's first birthday.

it was really fun to hang out with my cousins, who i hadn't really seen in awhile, and we spent a good chunk of time in the newly redone backyard.  we laughed and chatted and got caught up on each other's lives, celebrating one cousin's recent engagement, reminiscing about the old days, and marveling at the notion that the old lady turns 21 in a couple of months. 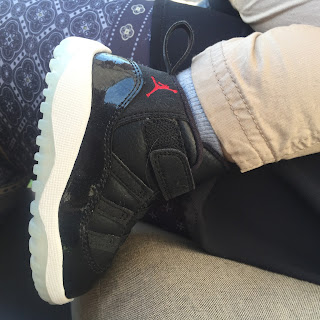 despite the barely-warm-enough so cal february weather, the bean and my cousin's two kids donned swimsuits and spent the afternoon in the pool.  they would jump in and out, alternating between swimming and splashing each other and munching on delicious lumpia: 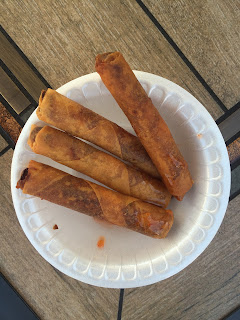 and when the novelty of the water finally wore off, the party moved inside for more food and some karaoke fun: 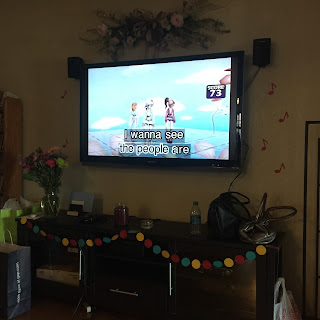 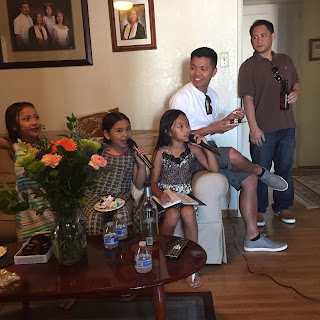 it was a good day, full of food and family and fun, and makes me look forward to the next gathering - which will likely be my cousin's as-yet-unplanned wedding.  i can't wait.
at March 01, 2016

Email ThisBlogThis!Share to TwitterShare to FacebookShare to Pinterest
Labels: family bonding, running my ass off