this week has been full of all sorts of fun stuff.  like, i put out a "last call" post on my facebook page for those mermaid tail blankets - i figure, winter is almost over and nobody's going to want fleece blankets much longer, right?  and i had piles of excess material sitting around, which was driving the hub absolutely crazy.  so i just said something like "hey, if you want one, let me know" and immediately got requests for like 5 of them.  sweet!

cutting out fabric is my least favorite part of sewing in general, so i just sat my happy ass down one morning and got through all of it in one shot.  and then of course life got in the way and it was another couple of days before i could sit down at my machine and start sewing.  but i did it: 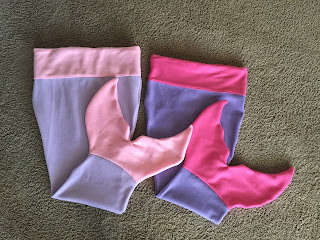 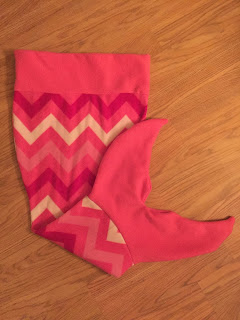 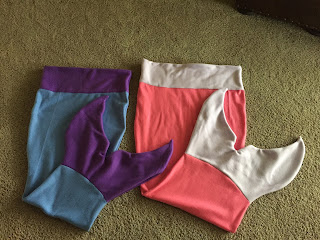 i actually have two more to get done, and then that does it for that round of mermaid tails.  i also need to crank out one adult-sized shark tail blanket to fulfill the IOU i gave the old lady's special friend back at christmas.  and the nice thing about all of this is that it's given me the motivation to start sewing again, which is particularly great because i have a ton of fabric lying around, just waiting to be used for something fantastic.  don't worry, piles of fabric, i'm comin' for ya.

because guess what?  this is the final weekend of girl scout cookie season 2016!!!!! 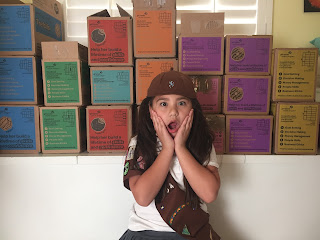 that's right, folks, this is it.  sunday is your very last chance to get your fix of thin mints, samoas, do-so-dos, trefoils, tagalongs, savannah smiles, rah rah raisins, and toffeetastics until next year.  look for your friendly neighborhood girl scouts in front of local grocery stores this weekend and show 'em some love while you stock up on treats that you can stick in the freezer to make 'em last for months.  and if you're local, hit me up - we can deliver!

i dragged the old lady out for a 3-miler the other day, and when i opened my nike+ app i found that i'd hit a milestone of sorts: 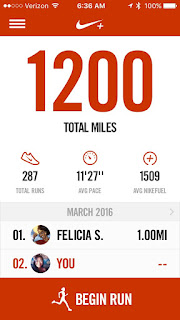 that's my lifetime mileage right there.  i suppose it's not particularly impressive considering a lot of my runner friends do that in one year, and that's taken me five.  heh.  but still...it was kind of cool to see the number.  i'm still adding to it, after all.

the old lady and i also attended the bean's award assembly for the second trimester of the year.  she's continuing to kick ass in school, and i love seeing her accept awards for her hard work. 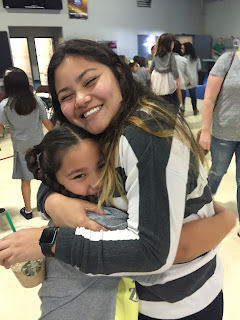 that 60-day challenge is winding down to an end.  i'm fairly certain i haven't lost any poundage, or any inches considering i didn't alter my diet even one bit. i did, however, commit to doing at least 3 barre classes per week.  so when i found myself having to cancel one of my classes this week because of a conflict in my schedule, i realized i'd have to do something a little crazy to make up for it:  do two classes in one day.  eek.  thursday saw me in the studio for the early 6:05 class, after which i headed home to get the bean ready and dropped off at school.  and then i changed into fresh workout gear and showed up again for the 8:30 class. 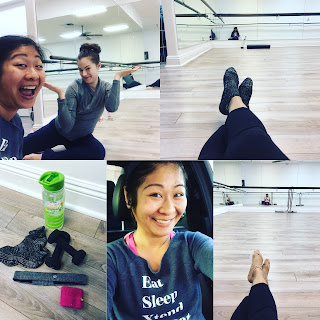 i'm not gonna lie, you guys - that shit was rough.  and probably not something i'll do again if i can avoid it.  but i'm glad i did, so that i can at least tell myself i met the fitness part of the challenge.

oh, and one last thing - my friend jessica love released her second book this week! 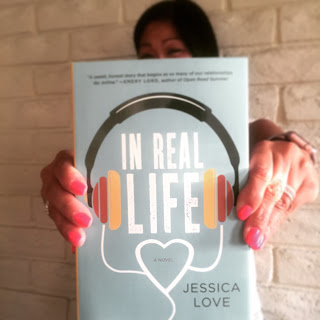 i'm super proud and excited for her, and i can't wait till i have some free time to dive in and read it...most likely in one sitting because i already know i won't be able to put it down.  you should totally get a copy too!

and now i'm going to mentally prep myself for the weekend of running i have ahead of me.  this is after tonight's girl scout meeting and amongst a bunch of other stuff to get accomplished over the next couple of days.  phew...i'm tired already.
at March 04, 2016

Email ThisBlogThis!Share to TwitterShare to FacebookShare to Pinterest
Labels: barre love, books are fun, everybody wants to be a mermaid, girl scouts, running my ass off