still trying to be a ballerina

i love shoes.  well, don't we all?  i don't know...maybe not everyone does.  i definitely do.  like, one of the things on my bucket list is to own a pair of those gorgeous red soled christian louboutins.  even though i know i'd stumble and fall on my ass at least once while wearing them.  or look incredibly awkward teetering around on those high heels as i try to get from point A to point B.  but i would look really effing great when i was sitting down, dammit.  i just want to have one pair of bangin' shoes in my wardrobe to pull out when those random special occasions come up.

who knows if and when that will ever happen, though?  and in the meantime, i'm more of a flats kinda girl anyway.  i spend most of my time in either some sort of athletic shoe or flip flops.  i'd been on the lookout for some good casual shoes that i could wear with anything, look semi-cute and still be comfy.  this is what led me to tieks.

tieks are ballet flats crafted from italian leather, featuring a hand-stitched leather insole, and fold up so that you can easily toss a pair in your purse.  you know, like if you're wearing a pair of those kick ass red soled shoes and want to have a backup in case your feet are ready to kill you where you stand?  now, i've had those shoes before and they were super cheesy and not much more comfortable than the heels i wanted to kick off.  but these are different.  much better quality and way more comfy.

it took me a really long time to suck it up and splurge on a pair of these things.  i mean, let's face it - they're not cheap.  i did a lot of googling and reading and asked around, but the final straw was an endorsement from a friend whose opinion i pretty much take as gospel, especially when it comes to fashion.  and because i had some fun money to play with from all those mermaid tail blankets i made during christmastime, i just went for it.

i placed the order online at around 11 in the morning, got the "your tieks have shipped!" notice a few hours later, and BOOM...with the magic of priority mail (and the fact that the company is located in beverly hills), the box was on my front porch the very next day.  i was pretty excited to crack it open and check it out. 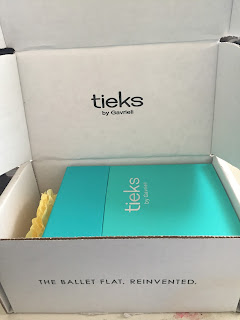 i pulled the bright blue box out (why do all the best things come in pretty blue boxes?) and admired the packaging for a second. 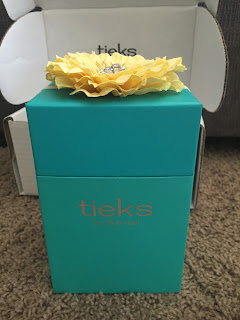 i slid the flower off, popped the lid open, and pulled out the contents of the box: 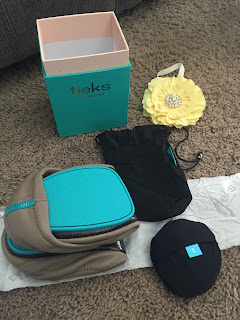 on the very top was a brochure about the shoes and a handwritten note from one of their customer service reps.  nice touch. 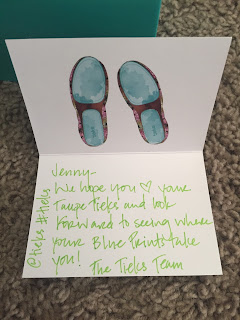 the little drawstring pouch is made for putting the folded shoes in your purse.  the round thing is a second bag for your heels or whatever shoes you're changing out of, and it opens up like this: 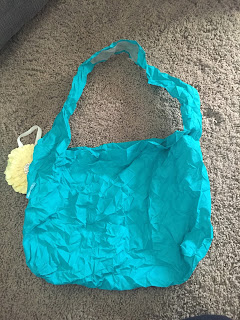 i put those suckers on right away to walk around the house in and get the feel of them.  my first thought as i tested them out was that they actually were pretty cushy and comfy, and the leather upper was really soft and molded to my awkwardly-shaped foot.  me likey.

since i had a few errands to run, i figured i might as well put them through a normal day and see how they held up. 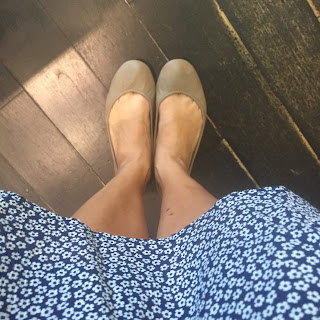 as i walked from one stop to the next, i found that the back of the shoes, while not that annoying elastic that you often find in ballet flats (hello, tory burch), still took a bit of getting used to.  and because i'm not getting paid to write this review, i can be totally honest and say that that "cushioned back for softer support on my achilles" didn't feel all that cushiony.  in fact, my achilles was pretty red and sad and crying out for a foot massage after wearing them around for a few hours.  i may have gotten a little disillusioned as i tried to rub the pain away.

but i was determined to make them work.  not to mention, since i'd already worn them out it wasn't like i could have returned them even if i wanted to.  but they were the perfect color and go with damn near everything i own, and i kept wearing them in the days that followed.  and sure enough, on the third day...they were fully broken in and i was in love.  they're simple enough to match everything from dresses to jeans to leggings to skirts and even yoga pants, and after that initial getting-to-know-you period, they really are very comfy.  i love them...so much so that i may have dipped into that fun money again and scooped up another pair, this time in metallic gray.  and the handwritten note that came with them this time said something like "hope you enjoy your second pair of tieks!"  ha.

these, too, took a couple of days of wearing before they were perfectly perfect.  and then i decided to take them on the ultimate comfort test: 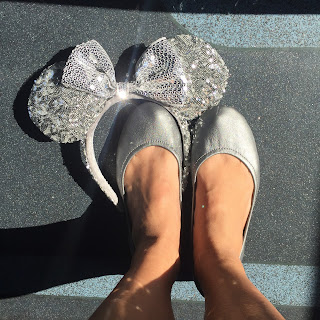 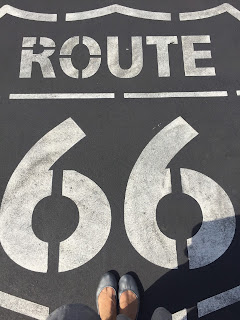 oh yes.  my tieks went for a trip to the happiest place on earth.  they looked great with my little outfit that i put together for the day: 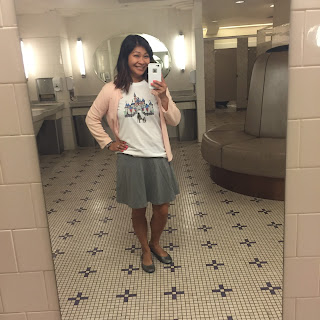 and guess what?  they held up really well!  we walked around the parks for several hours and i didn't have any problems at all.  and i even managed a jumpy photo before we left. 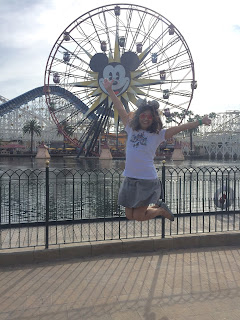 the only problem with tieks and their awesome array of fabulous colors?  i'm officially addicted.  i want them in every color.  there are lavender ones and mint ones and turquoise ones and they come in shiny patent and understated matte and different textures and i want them all.  i...uh...also now have them in fuchsia: 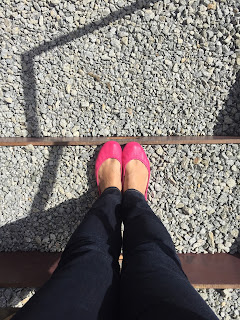 aren't they pretty?  i love them and i think they may be my favorites...so far.

tieks offers gift cards!  so in case anyone who loves me is reading this and looking for gifting ideas...well, i'm just sayin'.
at March 22, 2016