BFF's a freshman too

on wednesday, the teen, the bean and i headed to my alma mater for BFF's 8th grade promotion ceremony. it was "hot balls," as the teen likes to say, and we were sweating our asses off as we made our way to the bleachers.


our timing was pretty good, because as we found a seat, the music started and the ceremony began. the procession was led by students clad in red gowns, carrying the flag. 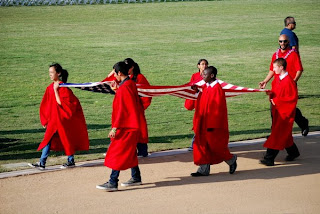 we were pretty amazed at the sheer size of BFF's 8th grade class. it looked so big - it seemed as though it were double the size of the teen's class at her own ceremony a couple of weeks ago. 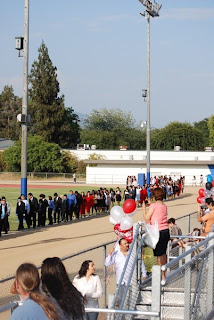 finally, we spotted BFF, looking gorgeous and so grown-up. i always thought she was a pretty girl, but when she gets dressed up and stuff, wow - i fear for her parents. heh. i should start a support group with them, because we're going to need each other in the coming years. 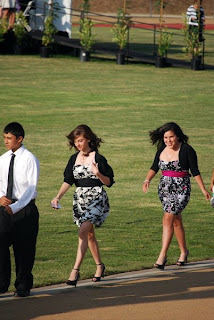 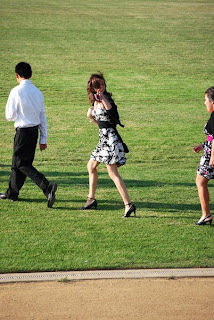 i was totally smiling to myself as i noted some of the girls COMPLETELY overdressed for the occasion. the teen was manning the camera, so i couldn't take any pictures of the most...interesting ensembles, but these two were rather prom-y looking. 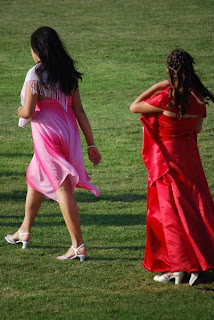 as the kids made their way to the lawn and got themselves situated, the school officials and seven - yes, SEVEN - valedictorians waited at the podium. for middle school. 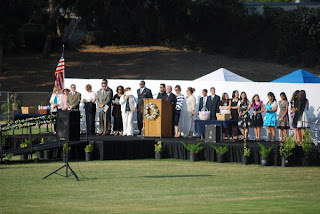 we all stood for the pledge of allegiance, and then four students stepped up to the microphone to perform the national anthem. 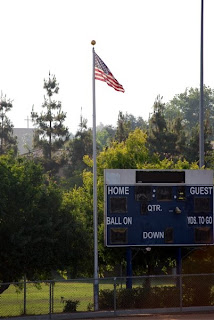 i must share this - one of my pet peeves is when people are completely disrespectful during the singing of the national anthem. there was a group sitting in front of us, and two of the guys were talking to each other really loudly during the song. i was SO annoyed. i seriously wanted to throw my shoes at them, but i settled for an icy glare and some not-so-subtle "shush"ing. yup, i was actually the shush-er instead of the shush-ee for once. heh. one of the women in the group noticed and motioned towards the guys to pipe down, but they ignored her as they had me. ugh.

and then one of the balloons they had brought for their promoting student came undone and flew away. i totally snickered and took a picture. bye bye, balloon. 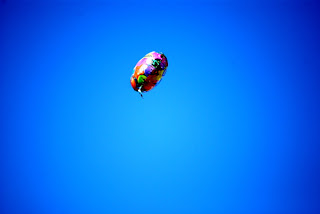 the bean started to get wiggly and impatient, so the teen took her for a walk during the seven valedictorian speeches. i knew it was a big moment for them and their proud families, but good lord, i was bored. don't get me wrong though, i listened to every word and clapped in all the right places like a good girl. 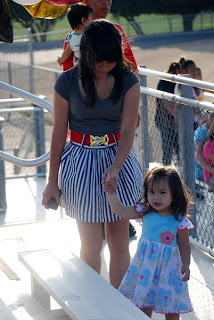 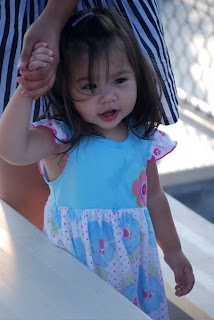 finally, the principal began the long process of calling up each and every student to accept their certificate of promotion. and when it was BFF's turn, we clapped and cheered for her. 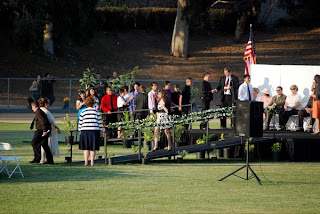 like at the teen's ceremony, the kids were well-behaved and the process was smooth and well-organized. and when it was over, the bleachers emptied out onto the field and it was a major clusterfuck. i can only imagine what it'll look like in four years, for high school. 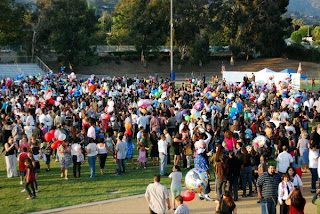 the teen's "friend," who was sitting with us, took the teen's sign that she'd made and held it up in an effort to help us connect with BFF. it kind of made me laugh - he reminded me of sally field in "norma rae." 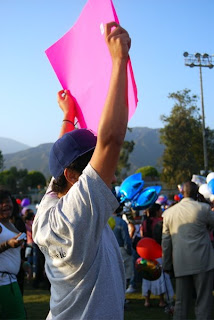 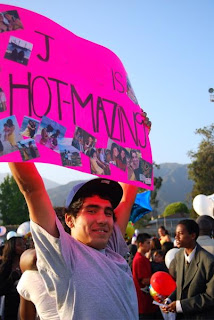 
at last, we found her. the two girls hugged and screamed as though they hadn't seen each other in ages. but it had been three whole days, you know. 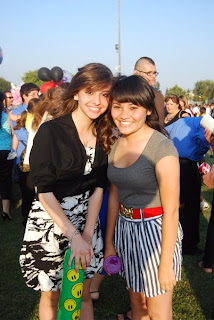 i was slightly confused over seeing BFF tower over the teen, because usually it's the other way around - until i looked down and noticed this: 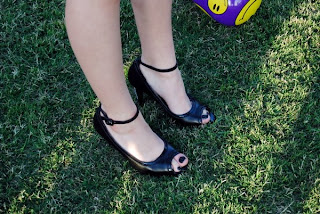 ouch. i can't even wear shoes that high - i would've been toast after about 2.5 minutes of it. and BFF confessed that her feet were, indeed, killing her. ha!


we found her parents in the bleachers and went up to join them. after the rounds of hugs, BFF's mom slipped an envelope into the teen's hand and whispered something in her ear. i was a little startled to see the teen's eyes get a little watery, and it was because BFF's mom was telling her that she was such a good friend and that they really missed having her around since we'd moved away. awwww. she goes over there to hang out as often as she can, but it's not like it was when we lived around the corner from them. kind of made me a little nostalgic. they'd come to our wedding in hawaii, and we consider them family - i miss them, too.

the girls laughed at the pictures that the teen had chosen to decorate the sign with. 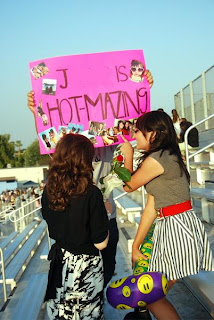 here's nostalgia for you. i don't have some of the older pictures on hand, but looking at some of these and seeing how much they've grown up really make me smile. these two have been BFFs since the first day of kindergarten.
from these: 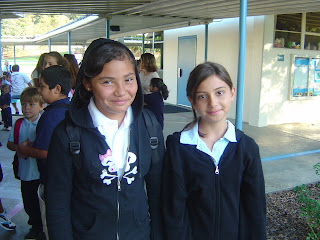 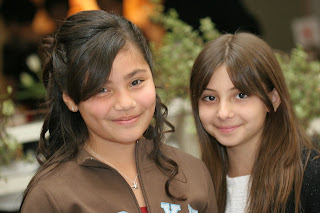 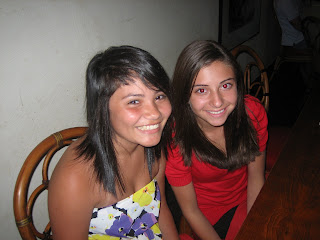 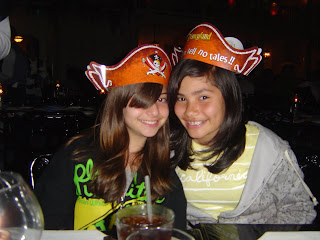 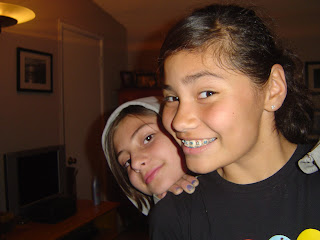 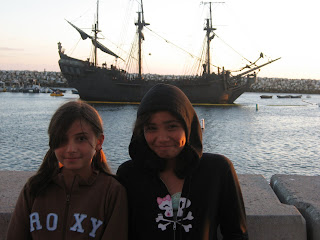 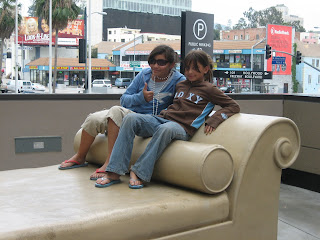 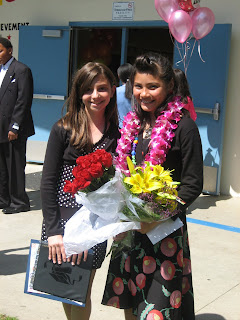 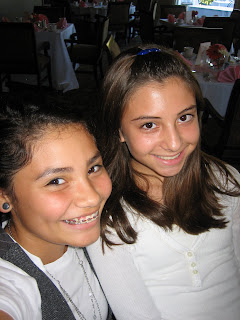 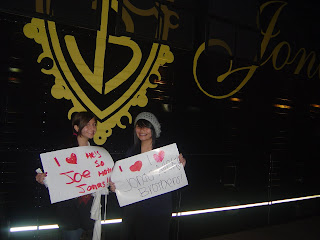 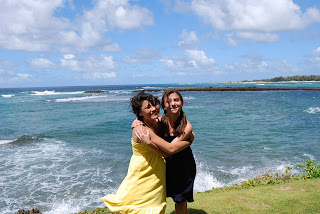 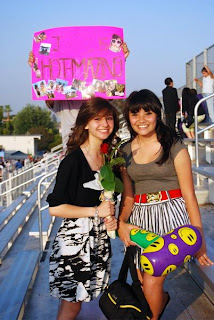