making it up as i go along

it's been quite a sad food week (well, couple of weeks, really) at the wan house. i've totally lost my mojo and have hit a cooking rut yet again. it kind of sucks, and i find that we're turning to drive-thrus, boring pantry meals, or recipe repeats all too often lately.
the most fun we've had is giggling over my dorkiness on sunday night, during the laker game. we were totally excited, because they were kicking ass, and i declared it PB&J night again - and why?
because peanut butter and grape jelly = purple and gold. oh, yeah. i grilled mine again, as i seem to be addicted to eating them that way these days, but the hub passed on that. he doesn't know what he's missing. anyway, we devoured our sandwiches between cheering and clapping, and rejoiced when the game came to an end with our boys on top.
oh! i did discover that when you replace the jelly with a nice smear of nutella, that peanut butter sandwich is magical. oh, yum. 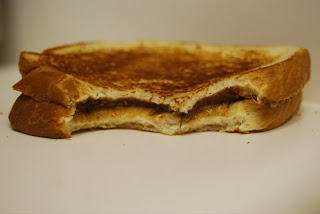 my go-to meal when the teen is home is to cook up a nice batch of simple marinara sauce and whatever pasta i happen to have in the pantry. on monday, i was actually planning on making some broccoli and cheese calzones. but the teen wasn't feelin' it, although those are typically on the teen-approved list. i peeked into the pantry and found that i didn't have any pasta on hand aside from a package of busted-up lasagna noodles, so i boiled some water, found some parmesan and mozzarella in the fridge, and presented her with...broken lasagna. 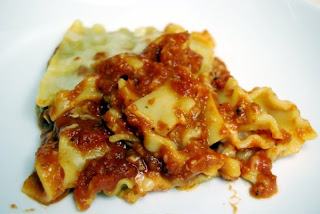 it was actually pretty tasty, and even the bean got in on the action - she grubbed down on a nice serving of it, managing to get most of it in her belly. well, and on her face, too. ha! i totally should've taken a picture. that's so unlike me.
tuesday night saw us at the table enjoying some soba noodles with stir-fried veggies. that was the day we'd hit up costco for the teen's new favorite CD, and i'd also picked up one of their rotisserie chickens that's always so tasty. and cheap! you get a 3-pound bird, cooked and seasoned to perfection, for like $5. and it's not all dried out and gross like the ones you so often find at the grocery store. costco rocks. 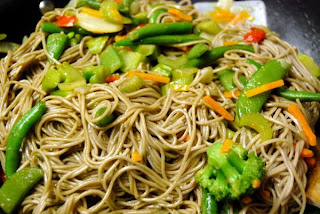 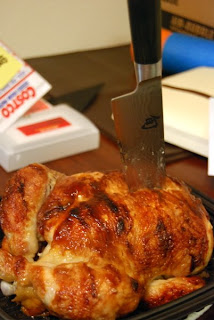 we ended up with half of the chicken left over, and now it sits in the fridge, waiting for me to come up with some amazing recipe to use it all up. got any ideas for me?

Email ThisBlogThis!Share to TwitterShare to FacebookShare to Pinterest
Labels: costco rocks, in a recipe rut