i got 99 problems but shopping ain't one

when the girls and i get bored at home, we often hop into the car and go drive around aimlessly to find something to do.

yesterday was one of those times. while it wasn't the 9th circle of hell at home as it had been over the weekend, we were restless and not really in the mood to kick it in the living room, watching "blue's clues" with the bean. so into the pri-YES we went.

knowing that traffic would kill us later on, we headed east into san dimas. we turned up san dimas canyon road and drove past the park, waved to the horses, past the golf course, and all the way up to the entrance of camp glenn rocky. we didn't know what it was, but i was intrigued by the signs that stated it was part of the los angeles county probation department. were there ex-cons up in here? in sleepy san dimas?

later, after turning to my friend google, i learned that it had once housed juvenile offenders who were sentenced to working off their debt to society. now it's a facility dedicated to conservation education. the things we learn from our random drives. heh.

as we drove into the la verne area, i spied the 99¢ store out of the corner of my eye. "ever gone in there?" i asked the teen.

and when she shook her head "no," i swung across three lanes of traffic and pulled into the parking lot. "OMG, mom, you're crazy!" she laughed. but i was kind of over the pointless driving and the bean was getting a little antsy sitting in the back seat, so we parked the car and got out. 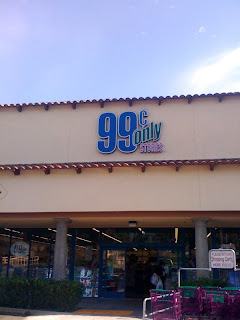 the bean slid into the seat of the very bright purple cart, and i was amused at the slogan embossed on the handle. 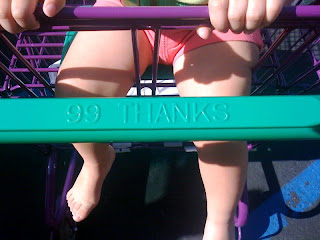 i hadn't set foot into one of these stores since i lived at home. my mom used to love going to places like this, where you could get a screaming deal on shit you never knew you wanted. hell, for all i know, she still does, ha! i remembered that i used to scoop up snacky stuff here all the time. shops like this always buy leftover crap that nobody else wants, and i often fell victim to discovering treats that i thought were delicious, but no one else did. finding shit like that at the 99¢ store always meant "buy a bunch of it, because you ain't gonna find it anywhere else ever again." and if you did find "normal" products, the first thing to do was check the expiration date. i saw stacks of turtle chex mix and i was totally ready to stock up until i flipped the bag over and realized that they were sporting "sell by" dates from may. poop. 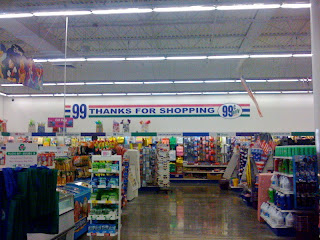 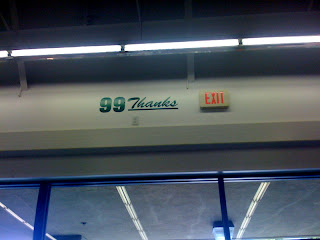 after wandering up and down all the aisles, we found ourselves in the check-out line with a cart full of all this crap: 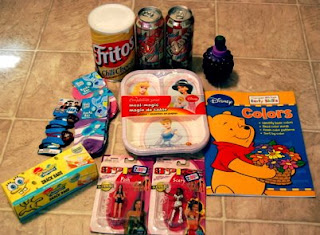 and only paid this: 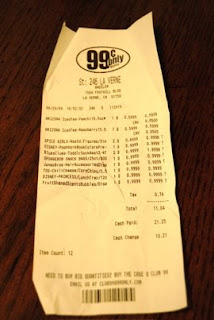 whee! and everyone was happy. the bean had two pairs of "blue's clues"-themed socks, a pack of disney princess paper plates, and a pooh coloring book. the teen had found an entire display of JoBros hair accessories and scooped up a set of clips adorned with JB "guitar picks," plus a couple of spice girls dolls (so funny!), some flavored arizona iced teas, some spongebob squarepants ziploc-type bags, and a bottle full of grape-scented bubble stuff. and as for me, i picked up a canister of non-expired chili cheese-flavored fritos.

"this store is MAGICAL!" the teen said. tee hee! 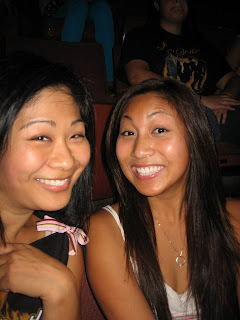 just you wait, cousin dear. the longer it is before we take new, cute pictures, the more motivation i get to dig out OOOOOOOOLD ones from the archives. i'll even scan 'em in - and we all know how lazy i am, so the effort it will take to get this done is significant.

Email ThisBlogThis!Share to TwitterShare to FacebookShare to Pinterest
Labels: wan is a bargain shopper