listening to my beloved ryan seacrest on my way in to the office this morning, he said something that sent chills down my spine and made me want to go back home and crawl back under the covers (well, aside from the fact that i still feel like shit and my chest is so achy i feel like i got run over by a mack truck):

today marks exactly six months until christmas.
for real? i mean, has it seriously already been half a year since we did the whole holiday thing? it honestly seems like just yesterday. but then again, i'm still somewhat in denial that the teen's school year is over and that she's heading off to high school in a few short months.
oy. i'm really getting old. the time just goes by too stinking fast.
the hub and i were chatting after the whole bridesmaid dress extravaganza a couple of weekends ago about my brother and o's upcoming november wedding. he's going to be a groomsman, which will be fun because i'll get to walk down the aisle with him again. yeah, i'm a goofball, i know it. but you know i'm totally corny like that. ah, i so love weddings. i know i'm gonna be all nostalgic and romantical and stuff on that day. our engagement and wedding was such a wonderful time in our lives and i always hop on any opportunity i get to reminisce and bask in the memories of all that love and happiness and stuff. of course, it's only gotten better as the days go by, but that year was really magical.
but i digress. as usual.
anyway, he was telling me that they're considering doing somewhat of a joint bachelor/ette party in sin city with the entire wedding party and some of their other friends. now, despite the number of weddings i've been in and attended, i've actually never done the vegas thing for a bachelorette bash. and since my brother and o have always been the attached-at-the-hip kinda couple (they're so cute), it didn't surprise me that this is potentially the plan.
and then i was slightly paralyzed at the realization that this meant i'd have to leave the bean.
overnight. maybe even two nights. oh, shit.
i haven't done that yet, and i'm ridiculously skittish about the whole idea. but really - WTF is wrong with me?? by then she's going to be two freaking years old. TWO!! who's the baby here, her or me? well, as evidenced by monday's episode, i suppose the answer is clear. heh.
operation "get seven on the blog as much as possible" continues: 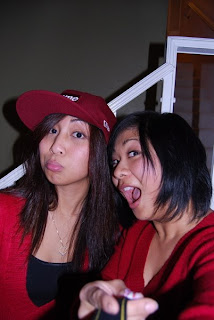