operation "get seven on blog as much as possible" starts now

my dear cousin seven graduated from UCSB last weekend. due to logistical bullshit, we weren't able to attend her ceremony - but most folks found themselves in the same boat. in anticipation of this, she and her folks put an insert in her announcements inviting one and all to a celebration in her honor at their home. that party was this weekend.

of course, between the ceremony and party, a pipe burst in the house, flooding the entire first story. amidst the clean-up and craziness that ensued, they scrambled and relocated the shindig to my aunt's home - typically known as party central, being laid out perfectly for entertaining large groups and the usual location for family GTGs.

seven loves my cookies. i know it's torture for her to read my blog and see the pictures of all the baked goodies i'm always making. and so i decided to make her a quickie batch of chocolate chip cookies, and as i pulled them out to let them cool, i realized i was sorely lacking in cute containers for food gift-giving. damn. so i turned to my meager supply of ziploc containers and threw in some half-assed decorations. at least it was girly and pink. i knew it wouldn't matter, as seven would push right past the presentation to get to the goods anyway. 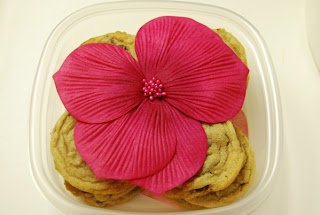 now y'all know i make cards for a living (sort of). this is what i do, and i love doing it. but what i don't love is the fact that all my supplies are all spread out between about four places in the thimble we call home, the garage, and storage. it sucks. i am also the ultimate procrastinator. these facts led to the bean and me stopping at a hallmark store on our way to the graduation party - hey, at least if i have to buy a ready-made card, i care enough to send the very best.

and of course, being at the height of graduation time, we walked in to find nearly empty card racks. eff, man. i was faced with several styles of greetings for high school, a few for middle and elementary school, even one for preschool. WTF? however, there were quite a few cards to choose from en español. after turning to the bean for her thoughts on the matter, i bit the bullet and just picked one. i figured it would be funny, anyway. and it was.

i handed it and our little cookie care package to seven as we arrived at the party and made her open the card right away. she, as expected, squealed at the sight of the baked goods and then giggled with me as she read the card. yay! 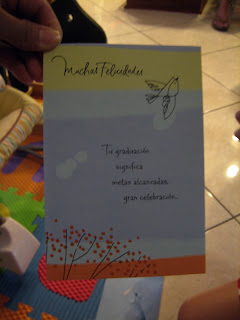 remember my cousin and his girlfriend, who had their baby just short of a week before the bean was born? they live in this house too, and the bean wasted no time and made herself right at home amongst the plethora of toys set up in the corner of the dining room. she thought it was cool that there was a tent that she could play in, like her little house at home. 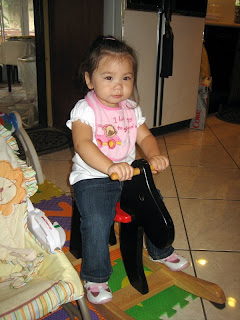 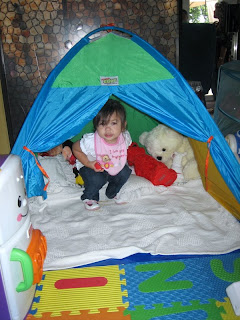 smiley was napping in her room when we arrived, but it wasn't long before she woke up and came out to play with the bean. 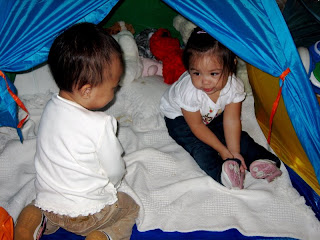 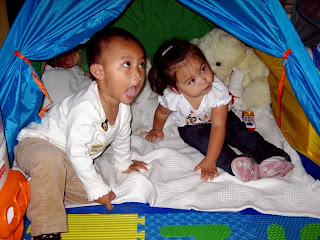 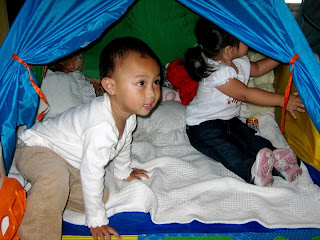 "mmmm, have you had these apple pies from mcdonald's? they're delicious." 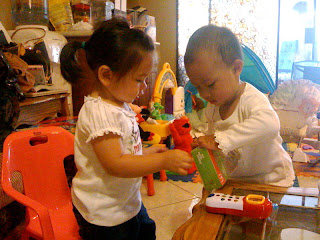 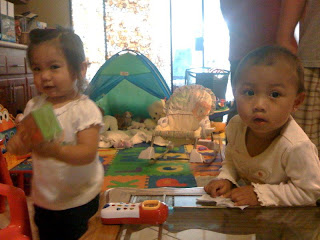 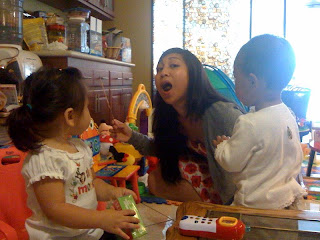 and not long afterwards, the gathering turned super awkward and uncomfortable for me. as i sat on one of the elmo chairs, playing with the kids and [unsuccessfully] trying to get a good shot of them together, the front door opened and a bunch of folks walked in. as my eyes adjusted to the sunlight that streamed through the open door, my heart sank as i realized it was the side of my family who'd turned against me during last year's drama. the folks who tried to take my painful revelations and manipulate them to make me look like an unhinged liar with a bad memory. the very reason i'd avoided family gatherings just like this.

as i sat stiffly on the too-small chair, unable and/or unwilling to move, from behind me came a cheerful "hello!"

i recognized that voice. this great-uncle (purely his title. not the way i feel about the man himself) had chosen to send out several e-mails to multiple family members last year, questioning my story, picking apart every tiny detail, attempting to twist things around to make me sound completely deranged. since my back was to him and it'd been so long since we'd been under the same roof, he totally didn't recognize me and thought he was simply greeting fellow partygoers.

i turned slowly, a tense, tight obligatory smile on my face. "hi," i said.

and when he realized it was me, his face fell, his mouth closed over further felicitations, and he slunk away and out into the next room with the rest of his family.

relieved, i turned back to the girls, who were playing nicely together with the oodles of toys that were available to them.

"moooom, i simply can't figure out what to play with next." 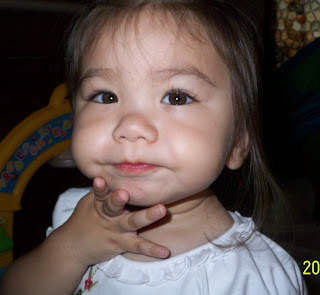 "well, stop for a second and take a picture with me." 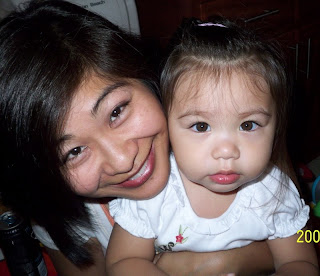 while i enjoyed chatting and catching up with seven and her brother, i honestly just wanted to get out of there. i hung in long enough to catch my mom and stepdad as they arrived, hopped in a group picture with her, seven, and a couple of my aunts, and then we bounced. 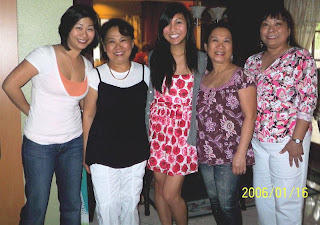 we had a legitimate reason to leave, though - dinner with the ILs at nearby north woods inn to celebrate the hub's uncle's 50th birthday. and since we were dining with a bunch of old folks (i say that lovingly!), dinner was at 5:15.

Email ThisBlogThis!Share to TwitterShare to FacebookShare to Pinterest
Labels: awkward family encounters, seven is a grown-up