choco pies all around

with the teen under weather and out of commission for the new year's 5K we'd signed up for months ago, the hub stepped in to make it his first race of 2014.  we left the girls happily giggling and watching a disney movie at home and headed out to the metro station in pasadena. 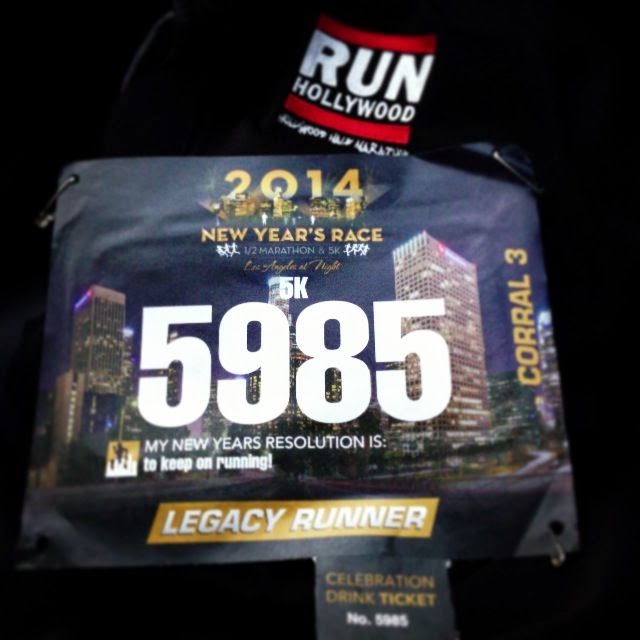 we arrived with just enough time to park, buy train fare, and hotfoot it across the bridge to get on the train that had just arrived.  we'd just taken a seat and gotten settled when the driver (conductor?  i don't know what to call the dude who runs the train) came through with his personal bag in hand and telling everyone that the train wasn't running anymore due to some sort of accident at union station.  that was where we were supposed to switch to another train that would stop right near the start line of the run.

well, crap.  i was annoyed that we'd just spent the cash for the tickets and would end up having to navigate street closures to find parking that would likely cost an arm and a freaking leg.  the hub didn't seem too upset, though, and because we'd allowed a good chunk of time for the train ride, we ended up in downtown l.a. a good hour before the start time.  parking wasn't as difficult to find as i'd anticipated, and we found ourselves standing near our corral with plenty of time to kill.

this speaker was really annoying.  it was turned up to full volume, but was clearly blown out.  there was a staffer who kept fiddling with it and trying to fix it, and it alternated between crazy loud static and silence.  i wanted to tell him to just ditch that shit and save our ears, but he seemed determined to get it up and going. 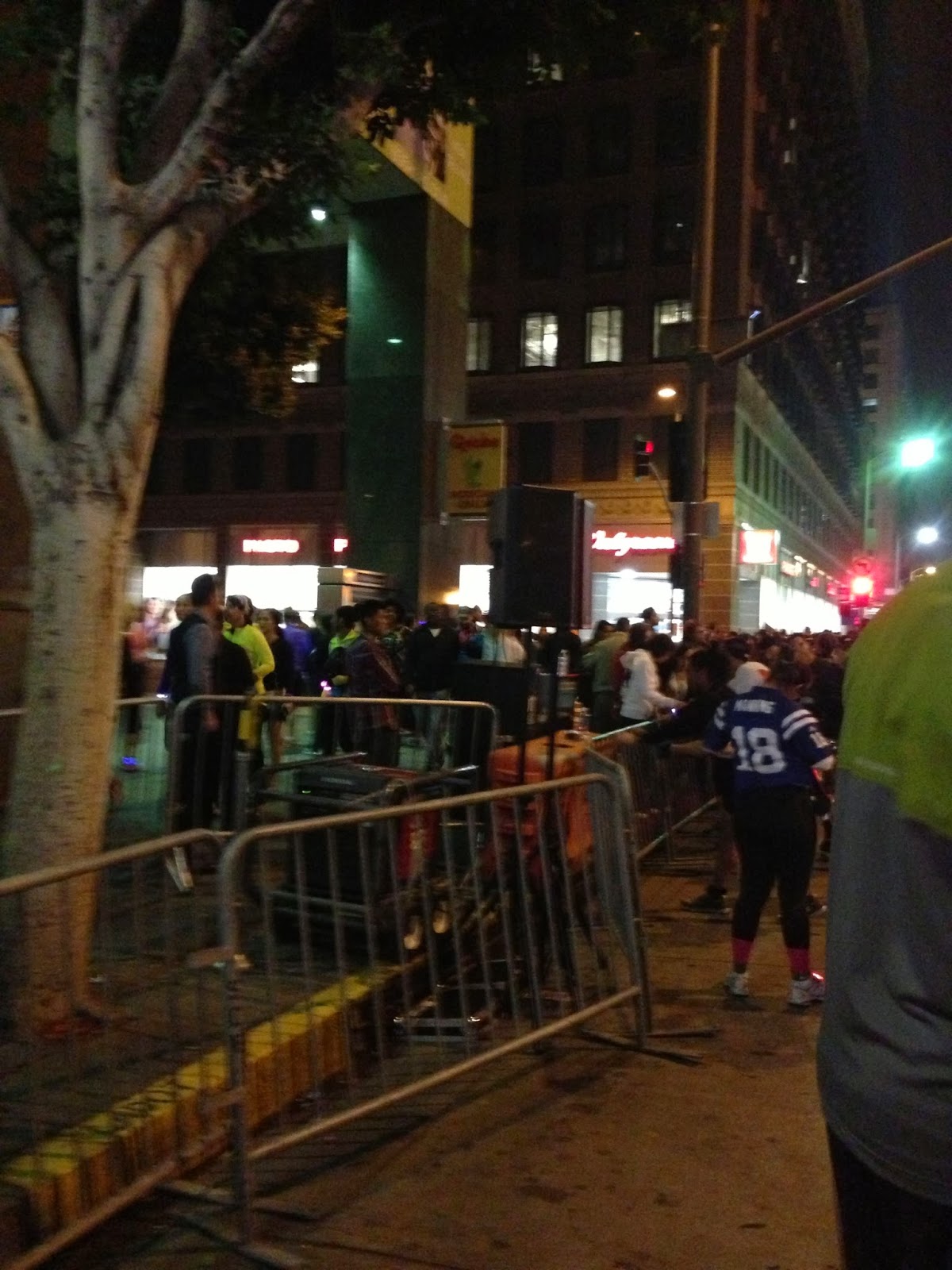 along with our bibs and t-shirts, we'd been given fun blinky bracelets.  the hub just gave me a look when i offered him the blue one, so i slapped my pink one on and was a happy camper. 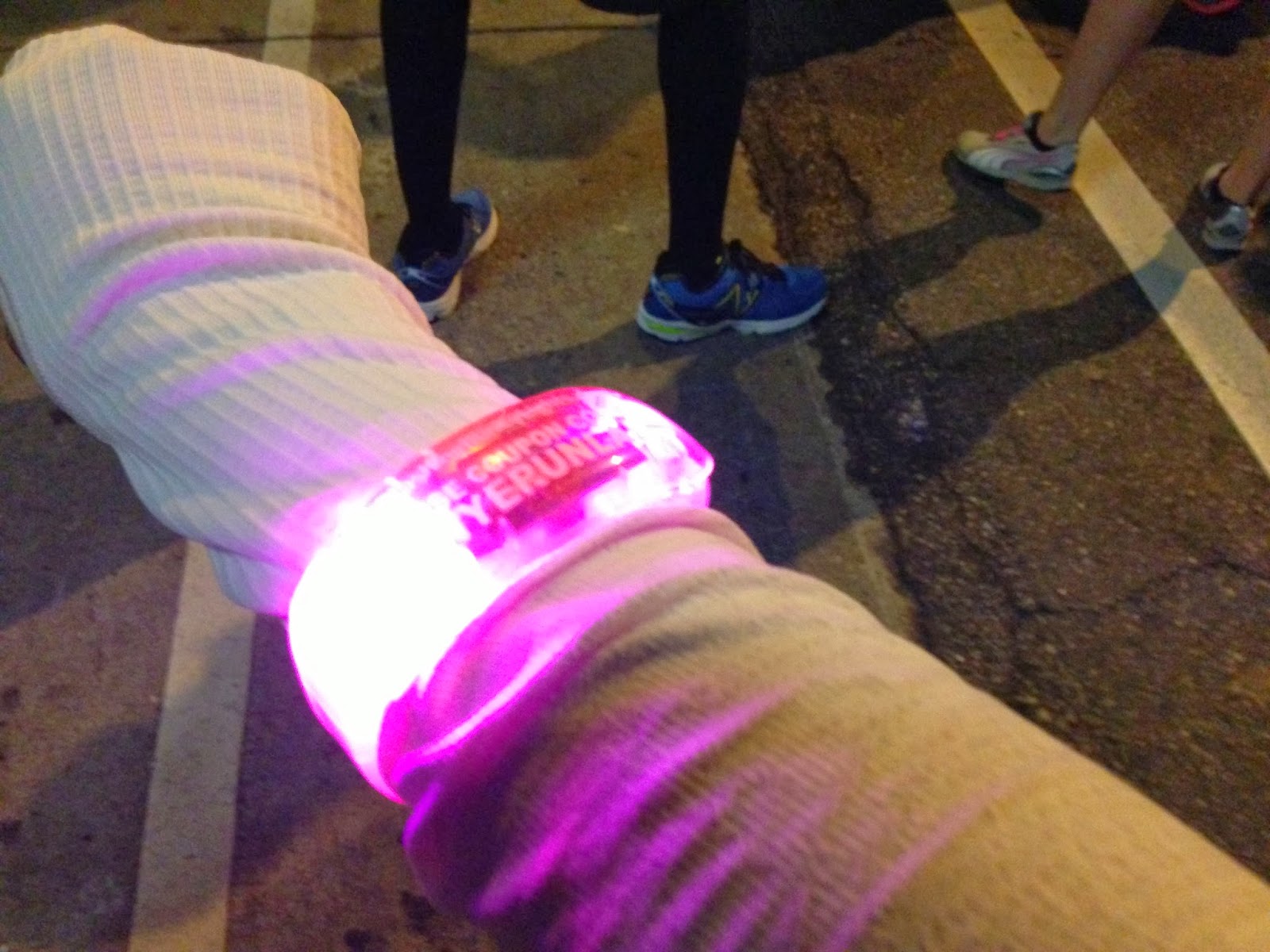 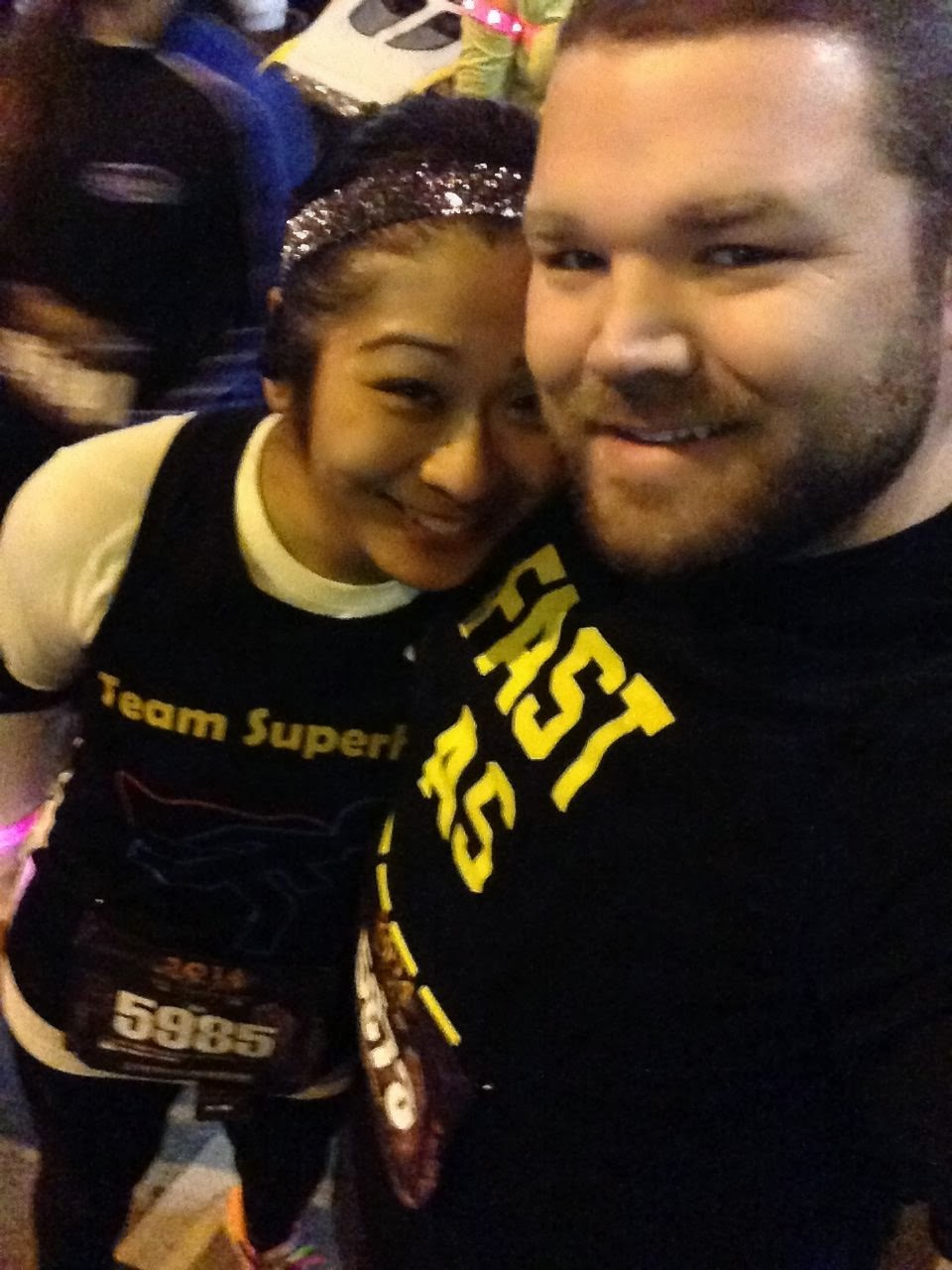 the hub's bib placed him in corral 6.  mine was in 3, which would have been kinda cool, but i didn't want to start the race solo when we were there together.  and when it was time to start, the gap between start times for the corrals wasn't too bad anyway.  we were at the start line in no time. 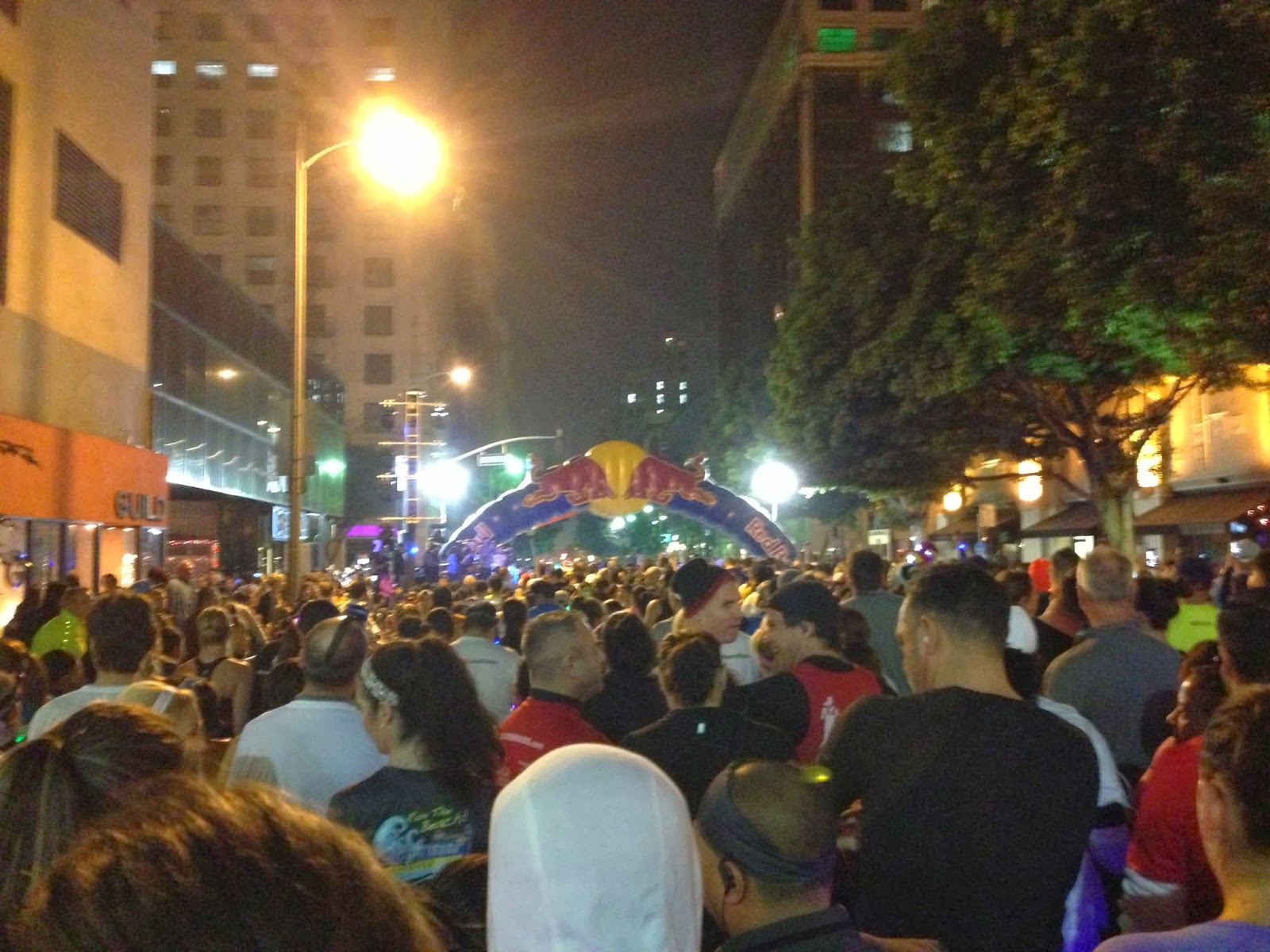 from here on out, my pictures are horribly blurry.  i'd like to say that it was because i was just moving that fast, but we all know the truth. 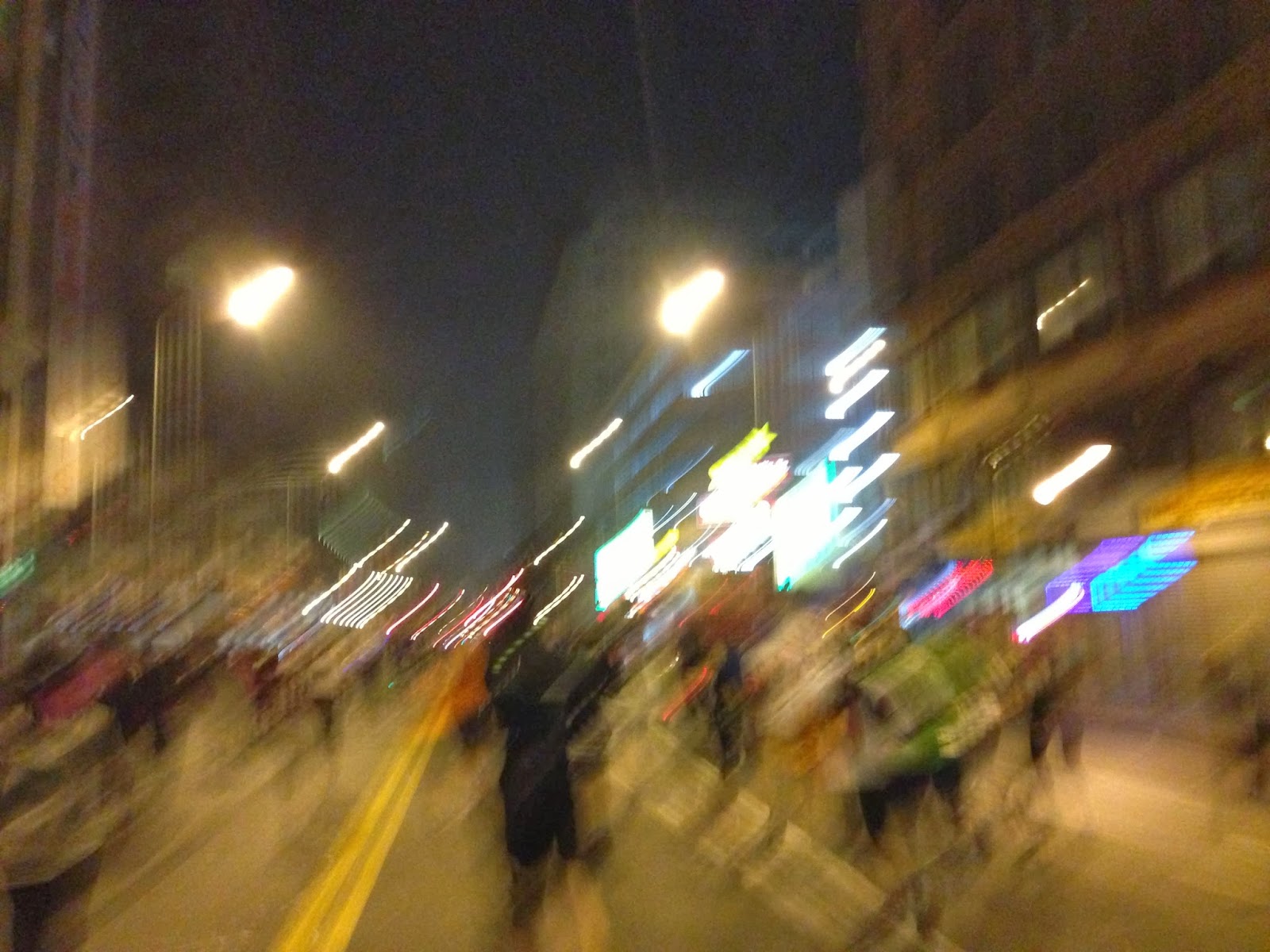 we stayed together for the first half of the run. 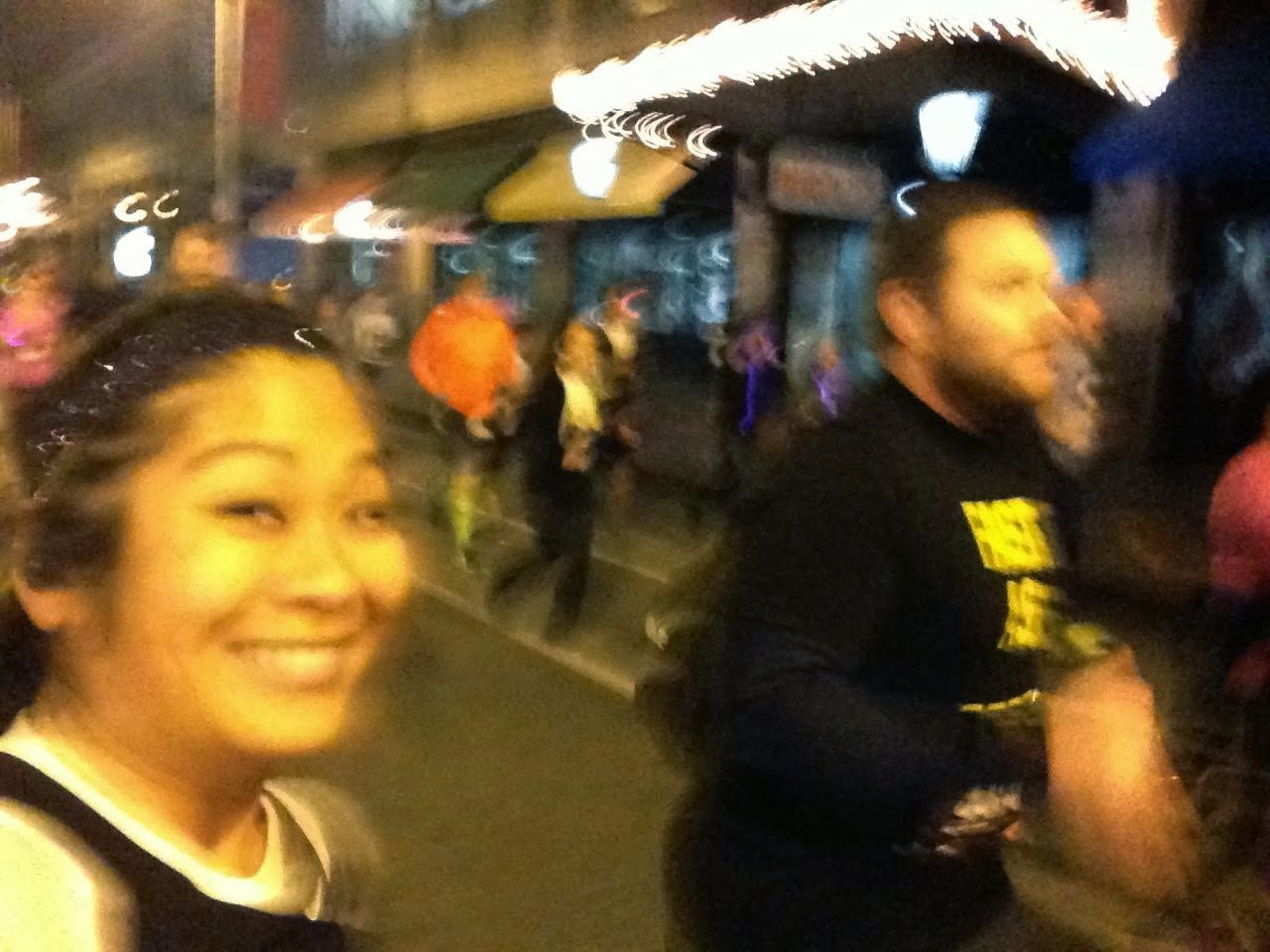 the course seemed slightly different this year, with a bit of an uphill near the halfway mark.  after that, it was all on a downhill, which was fabulous.  i somehow managed to get through the whole 5K without stopping for a single walk break.  yay for me!

i didn't get anywhere near a PR this time, but i was still happy to average at about a 10:30 mile. 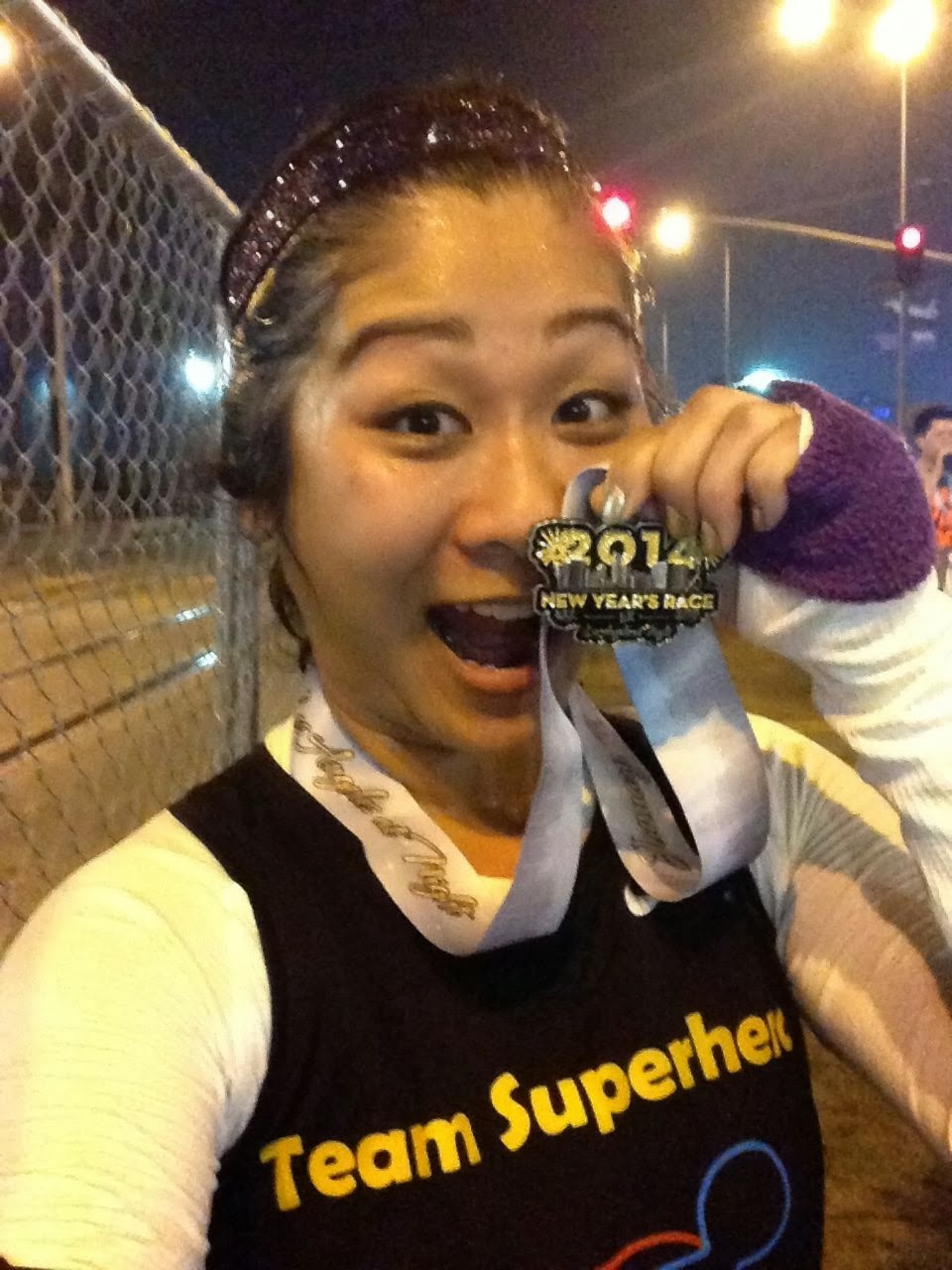 the hub crossed the finish not long after i did. 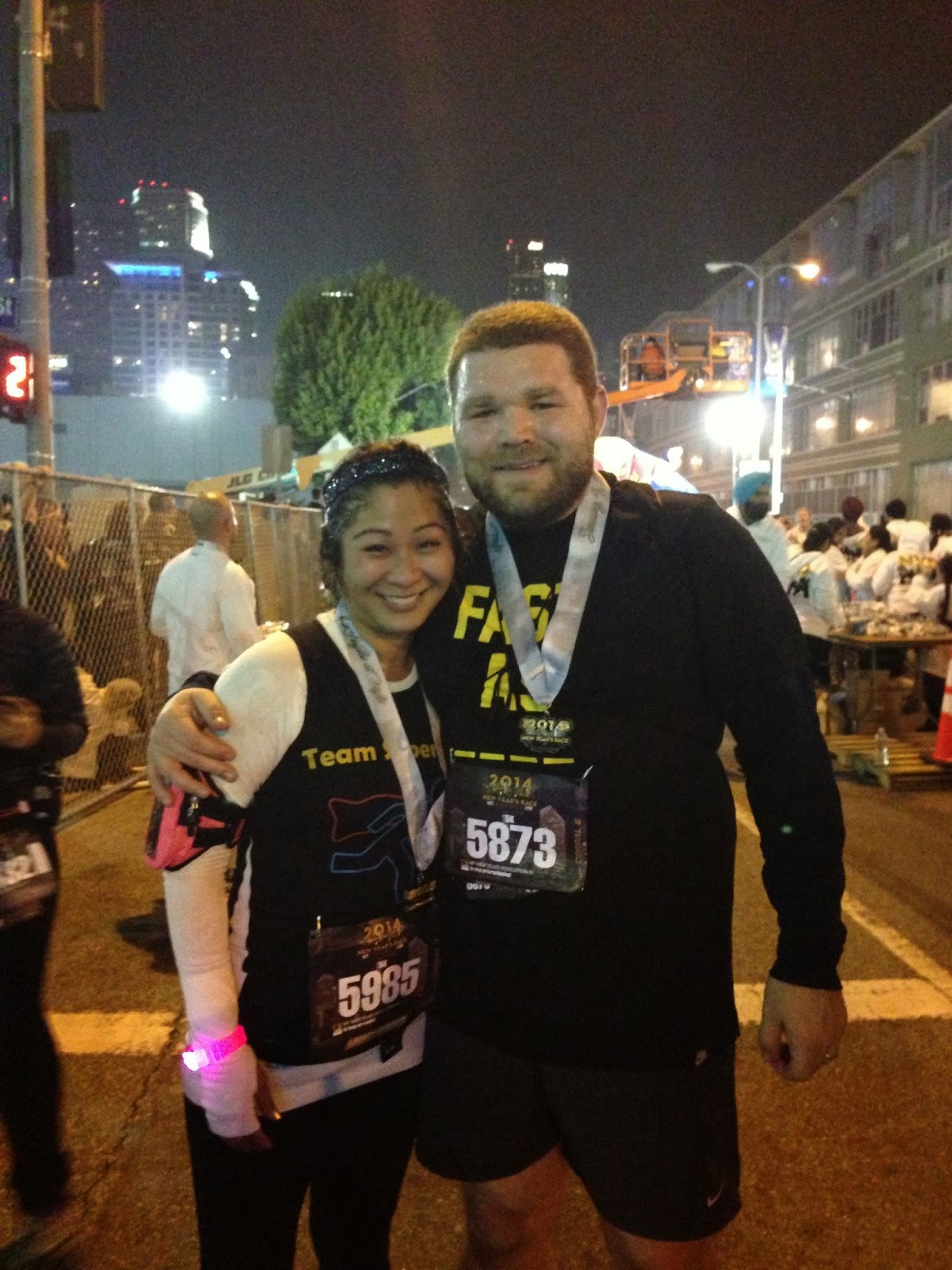 i couldn't help but laugh at this table of post-race snacks. 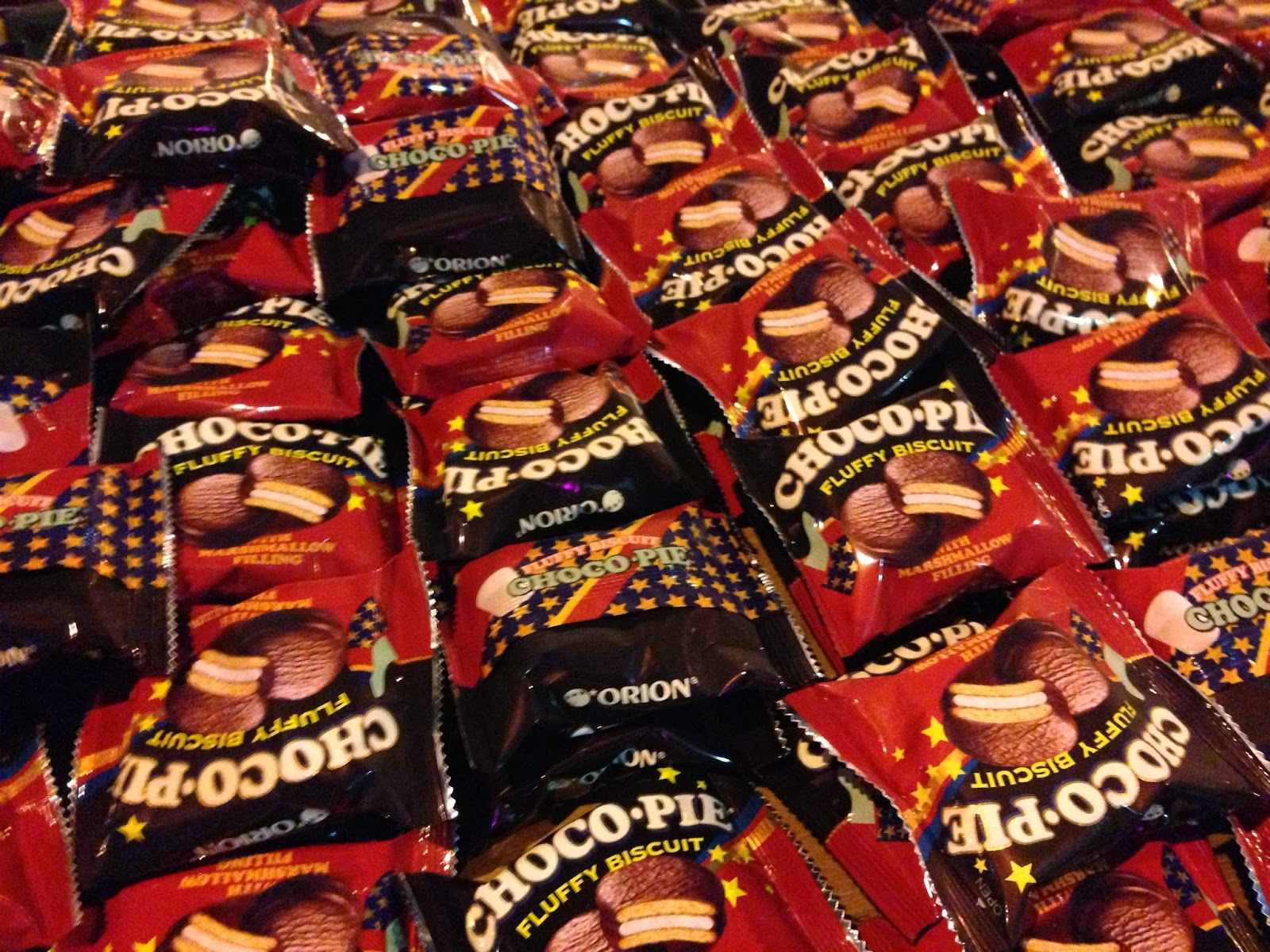 there was quite a line-up of food trucks, too. 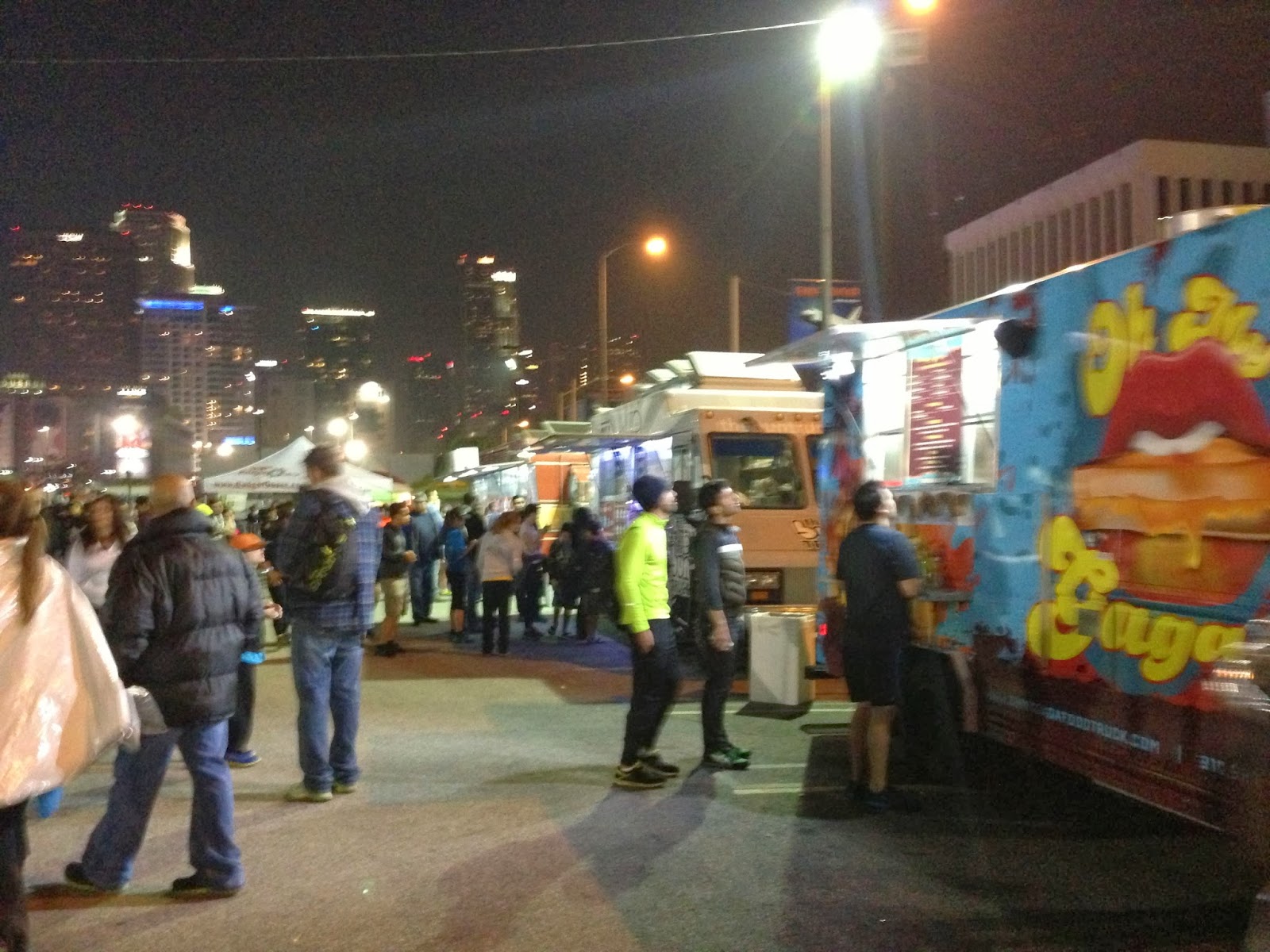 i offered my free beer ticket to the hub, but he wasn't feeling it. 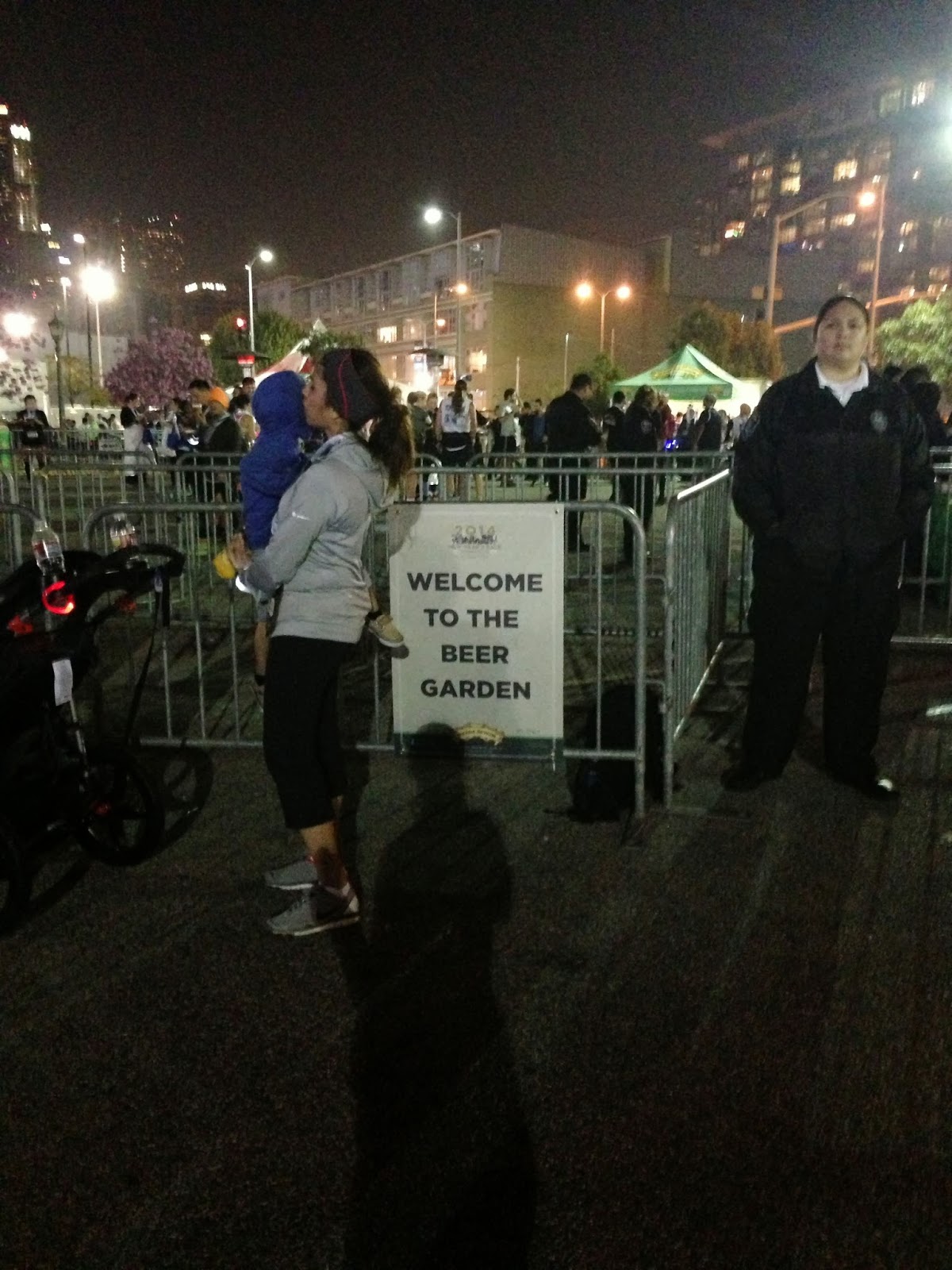 because i couldn't get a decent shot while running, this was the view approaching the finish. 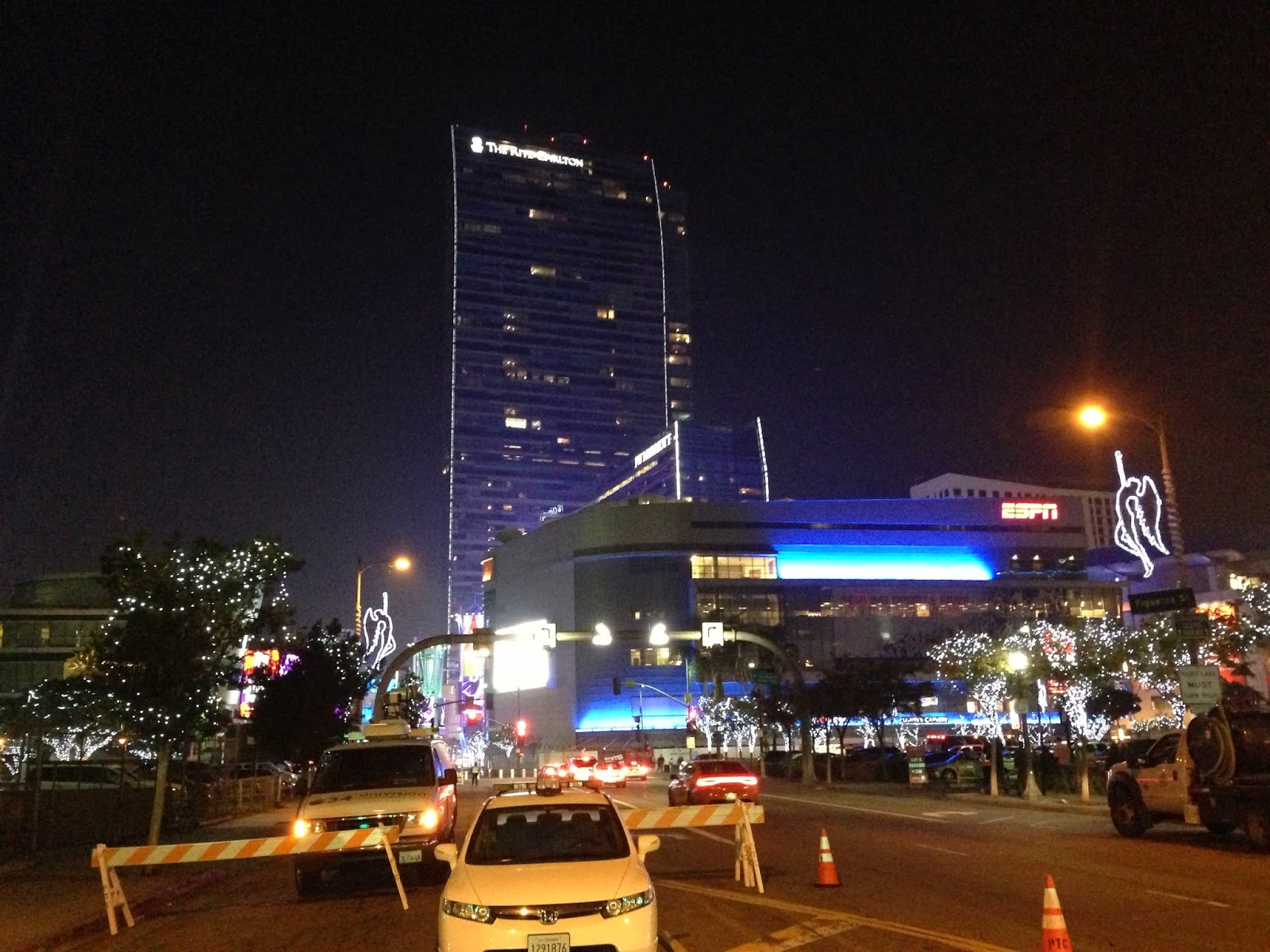 since we were all sweaty and grungy, we grabbed some food at the krave kobe burger grill not too far from home.  my steak sandwich was really tasty. 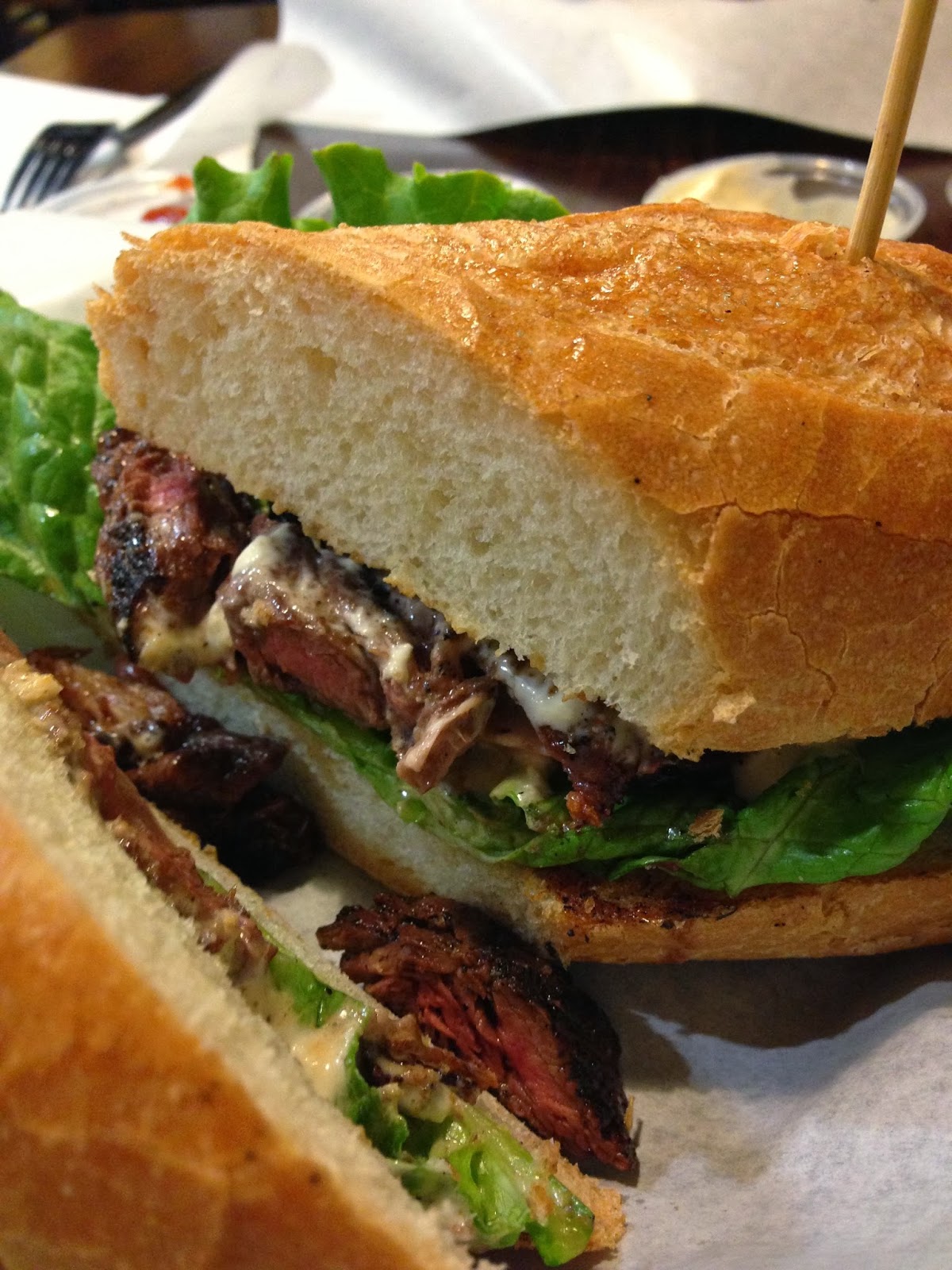 and the first thing we saw when we got back home was the awesome living room fort the girls had worked on. 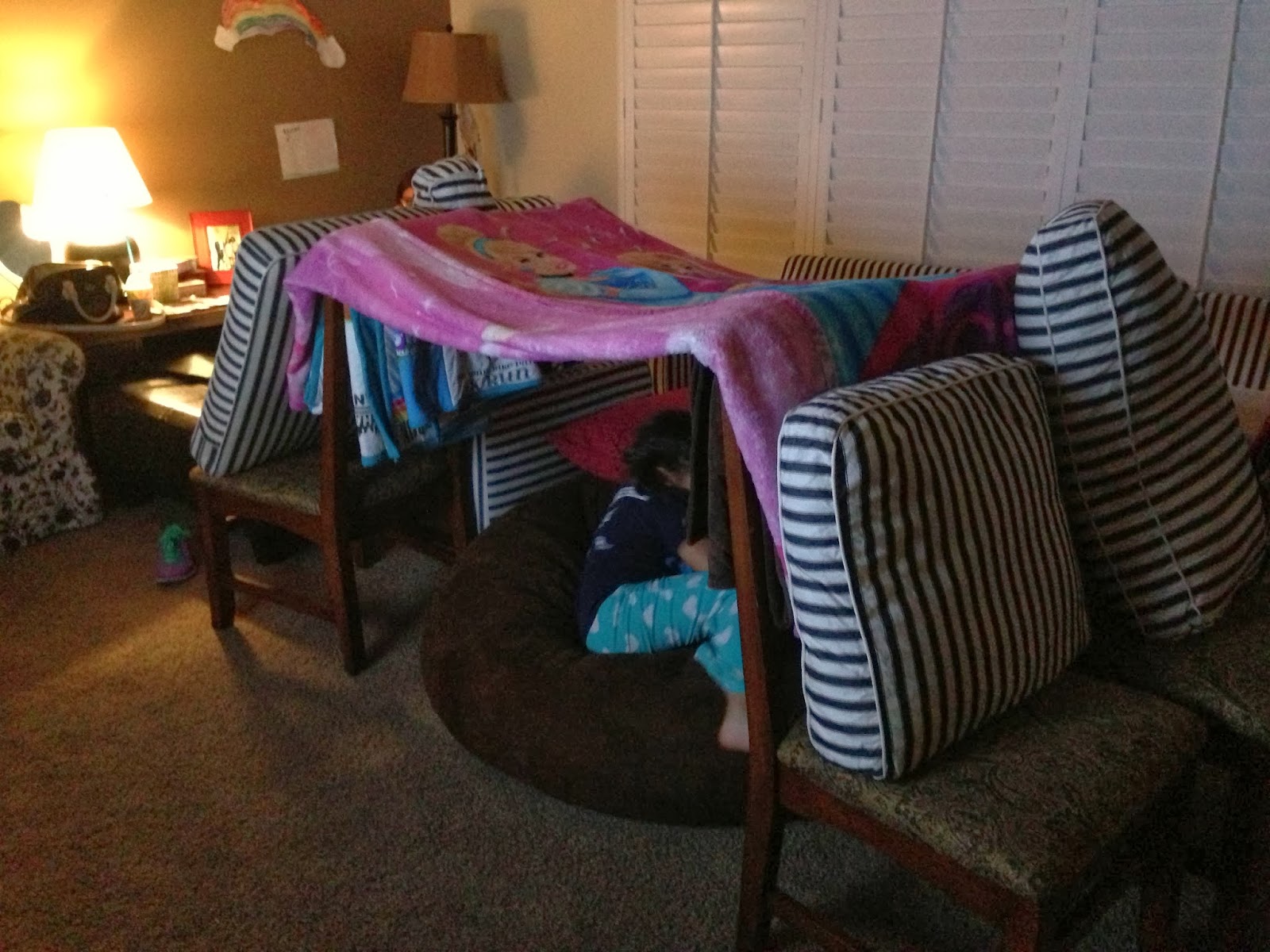 Email ThisBlogThis!Share to TwitterShare to FacebookShare to Pinterest
Labels: new year's race, running my ass off