with the soundtrack on continuous loop in the car and three trips to the theater to see it on the big screen, i'd definitely say that this house is full of "frozen" fans.  the bean has several dolls and received both "anna" and "elsa" costumes from santa at christmas.

except that the dresses were of that awful "one size fits all" variety, marked to fit up to a size 6.  i just knew that she'd outgrow them in about three seconds, and without any urgent need to wear either of them i managed to convince her to return them both.  i told her to pick her favorite character, and we'd just use the money we got back from the returns to buy it at the disney store, where the costumes are available in actual sizes.  plus, she'd already been invited to her first birthday party of 2014, and i'm sure you can guess what the theme was.

and then that totally backfired on me because she chose "elsa," the older sister who has magical ice powers.  apparently, every other little girl in the whole world loves elsa more than anna, because the only costume i could find in her size was on amazon for a whopping $400.

as i clicked on the box to close that window, i decided to take a closer look at these dresses to get an idea of the level of difficulty.  there was this one: 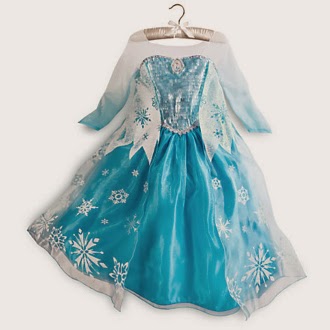 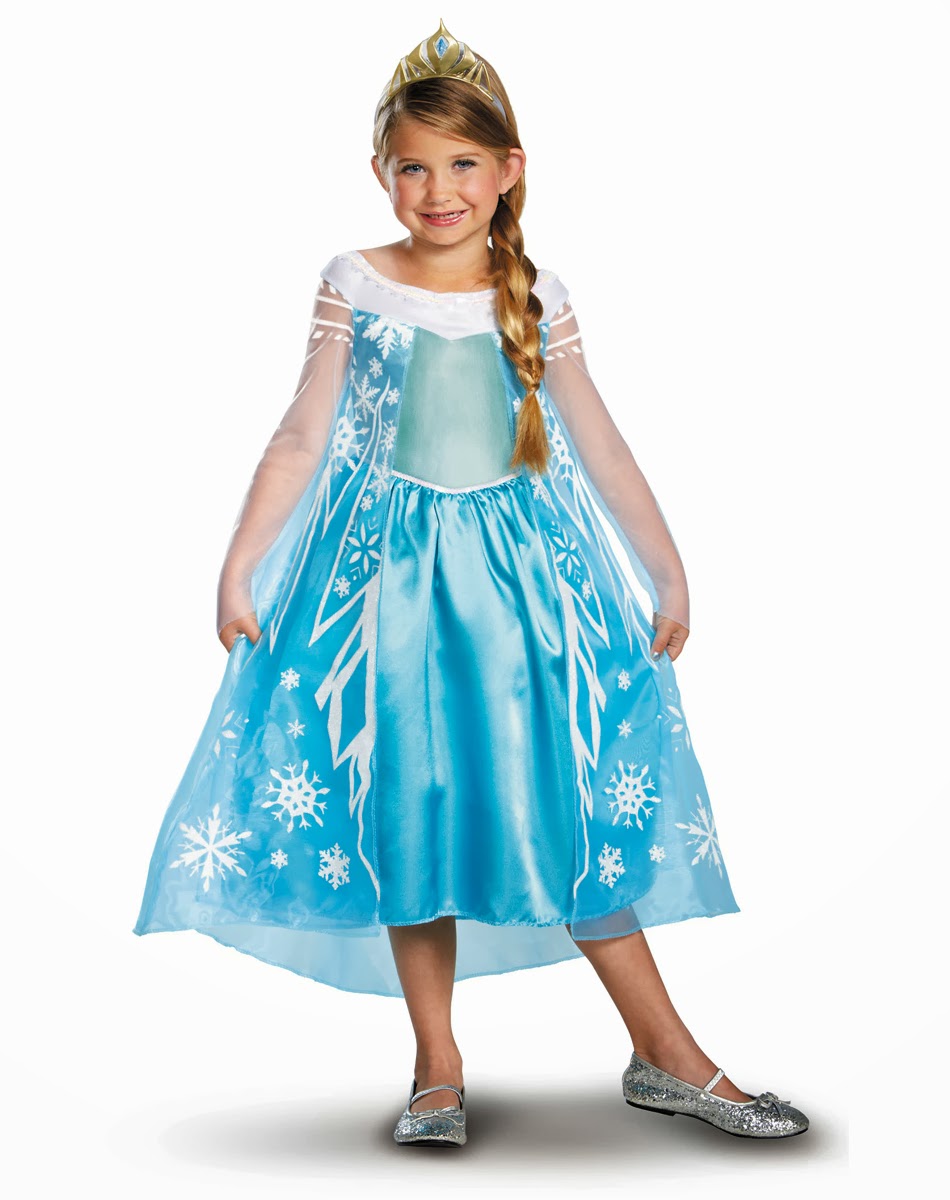 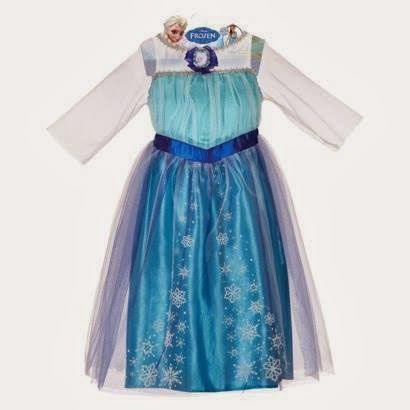 all pretty similar, and all fairly simple as long as the right fabric was on hand.  then i came across a tutorial by a mom who'd managed to cobble together a pretty cute version using a white long-sleeved leotard and fabric she'd found at her local joann's.  she made it look easy, and after checking the joann's website to see if the sheer snowflake material was still available (it was!  4 yards of it, at my local store!), i literally ran out the door to snap it up.  i'm sure the other customers in the shop thought i was batshit crazy when i let out a victorious whoop and grabbed the bolt like it was lost treasure.  and then i likely solidified that assumption as i scurried through the aisles mumbling to myself, searching for just the right fabrics to create the rest of the dress.

when i got home, i sat down and created a super rough sketch of what i wanted to accomplish: 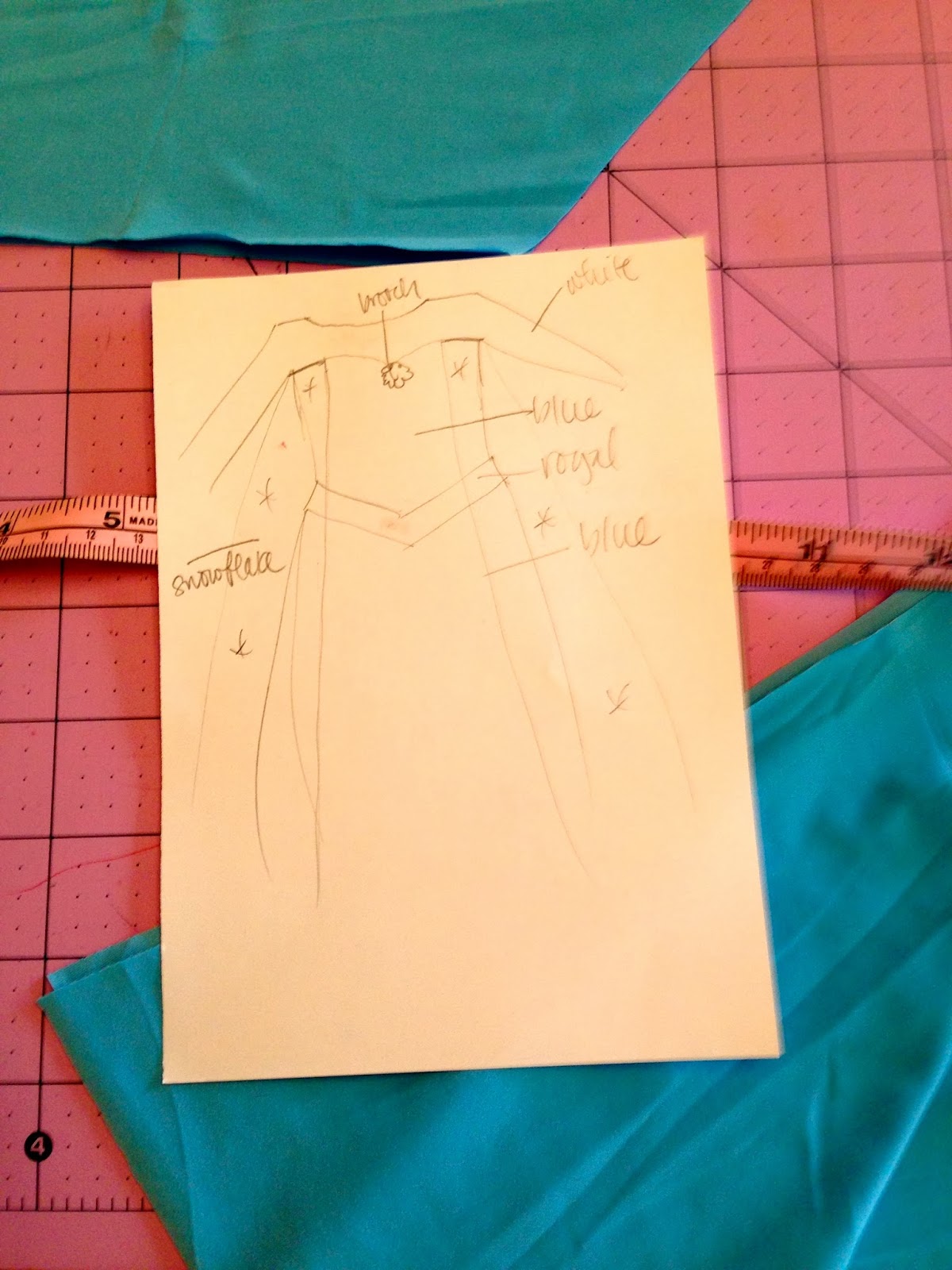 and gathered all of my supplies together. 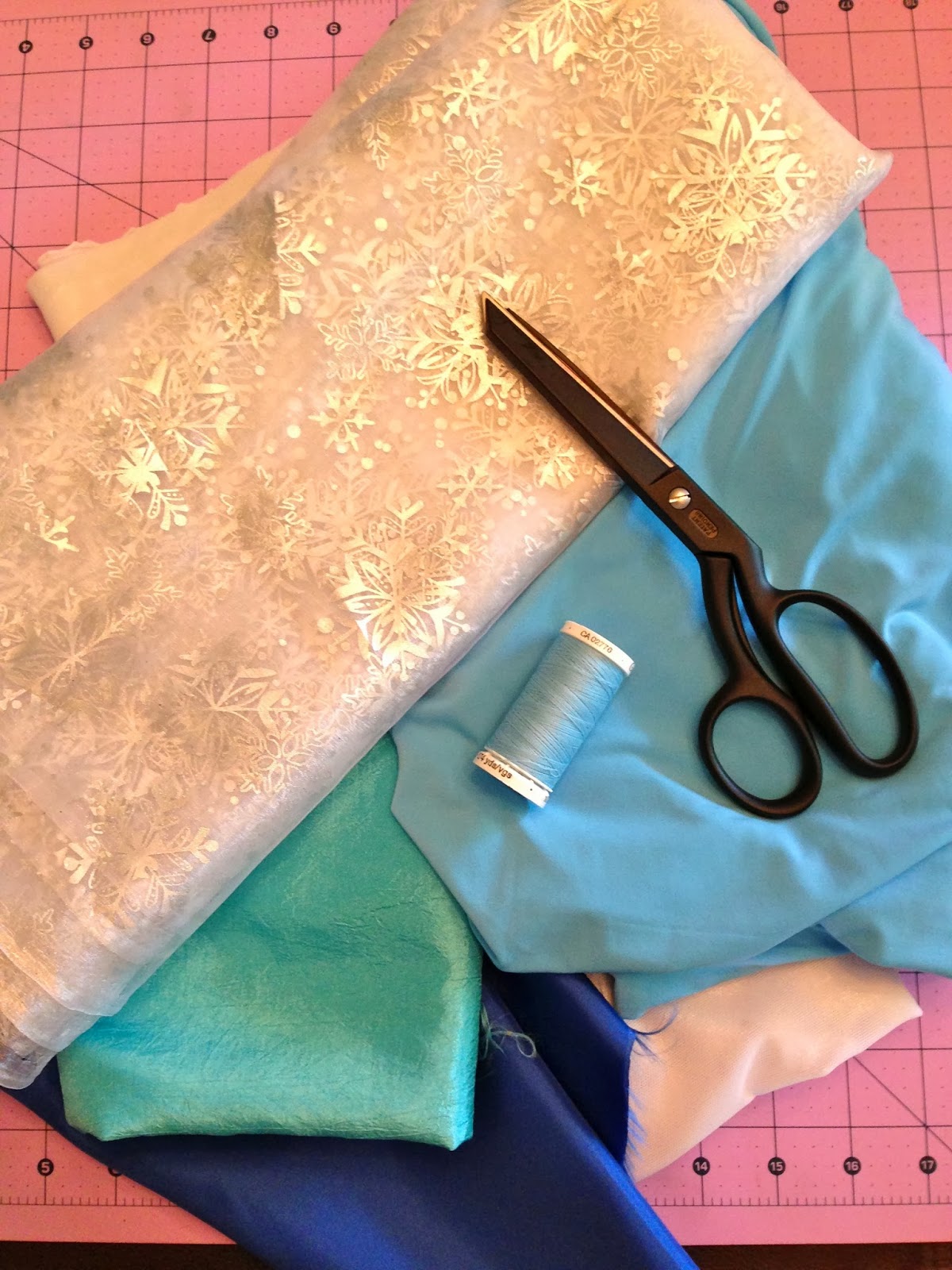 for additional guidance, i fished out the bean's beloved elsa doll and inspected her little dress closely. 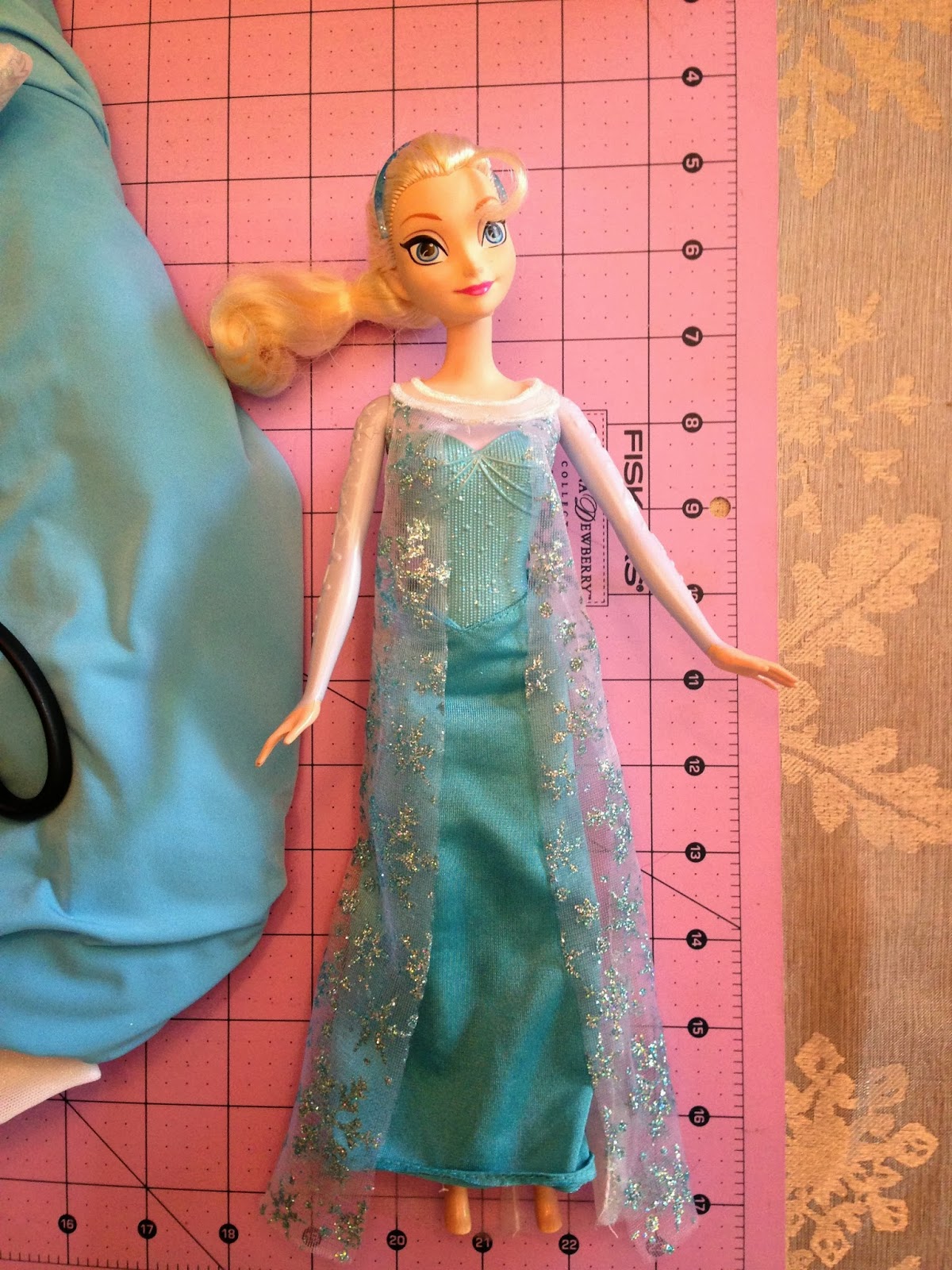 a piece of the front of the bodice, using some fun stretchy material i'd found on clearance in the dancewear fabric section: 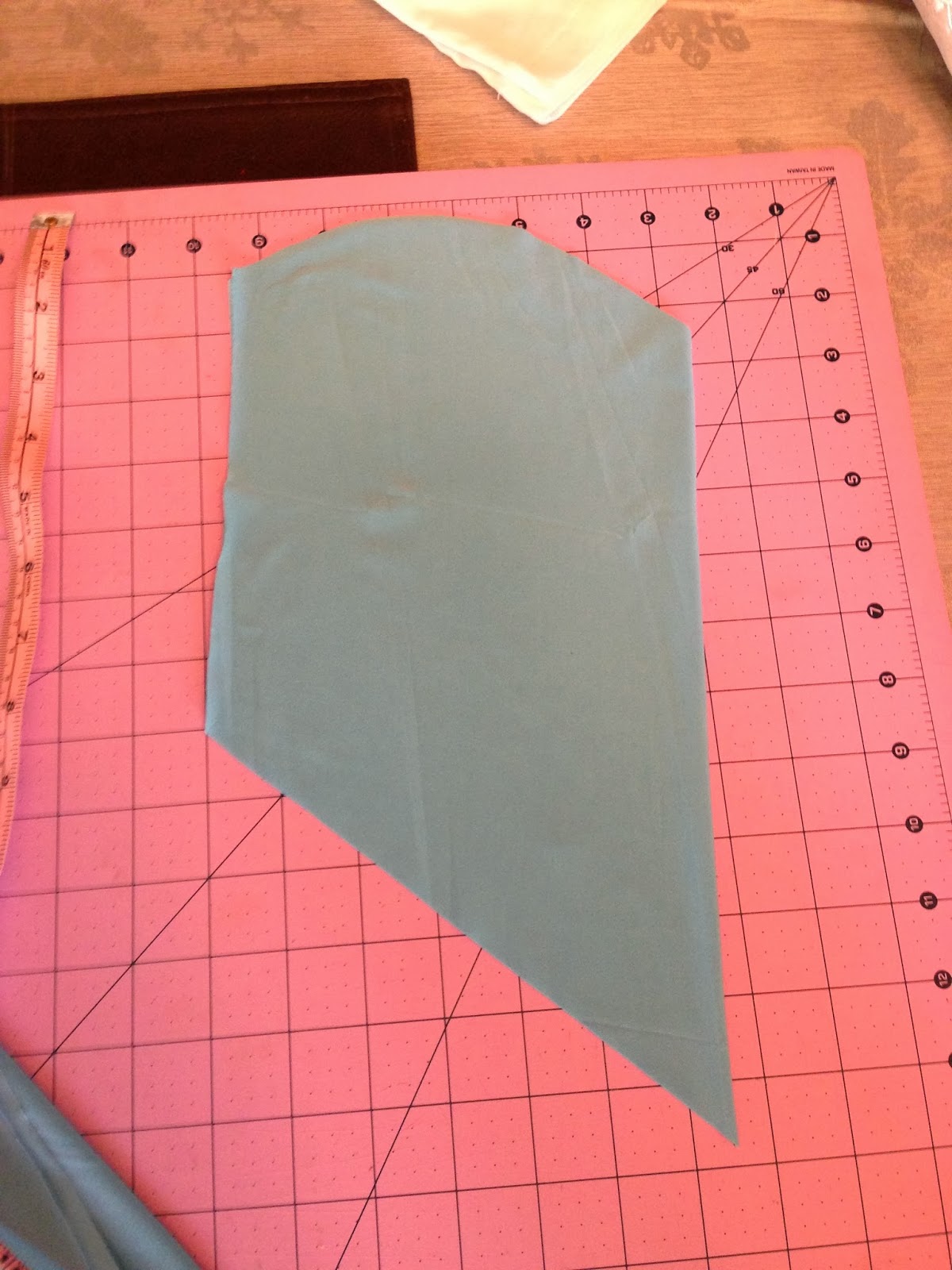 using one of the bean's shirts, i cut out the rest of the top from the length of white/silver dancewear fabric i'd picked up.  i decided to start out by pinning and sewing the shoulders together. 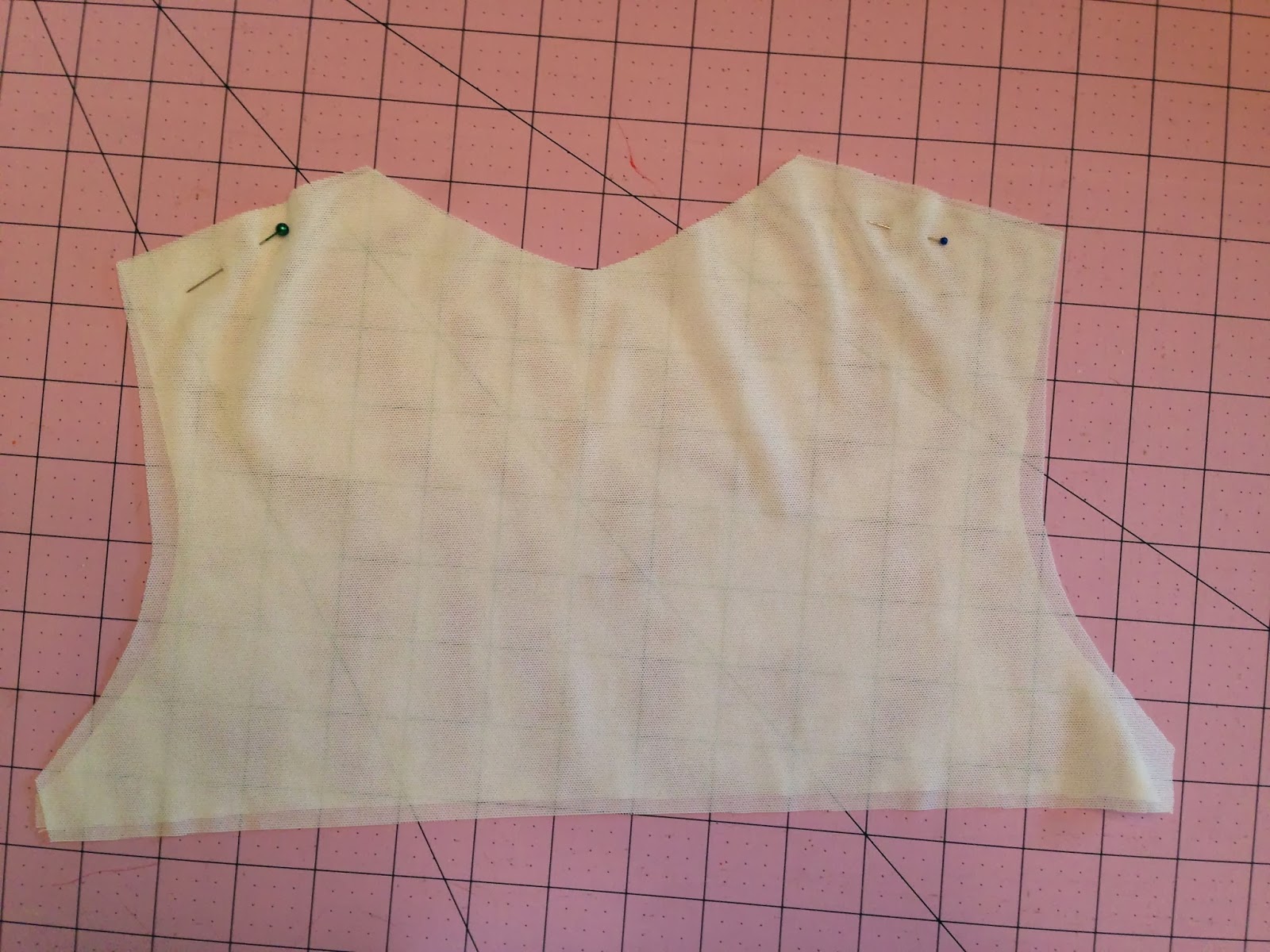 i moved on to sewing the neck opening, and when i was done i took one look at it and realized that my kid's big ass nugget would never fit through it.  so i used a little trick i learned from another project i did last summer and sewed a little rectangle of fabric to the middle of one side: 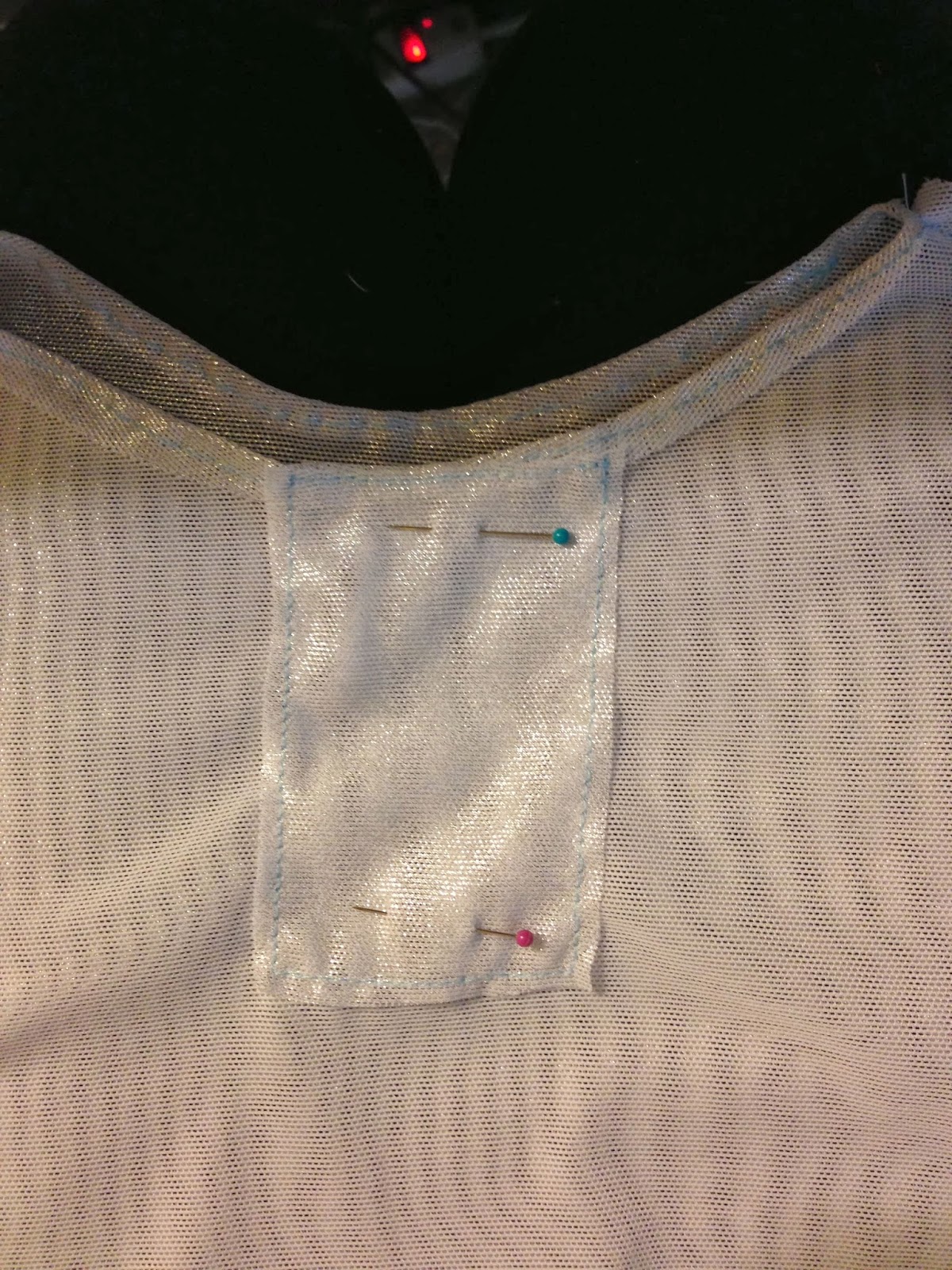 then i sewed down the middle(ish) of the rectangle, moved over just a couple of stitches, and sewed back up.  a snip of the scissors, a little bit of velcro, and my problem was solved. 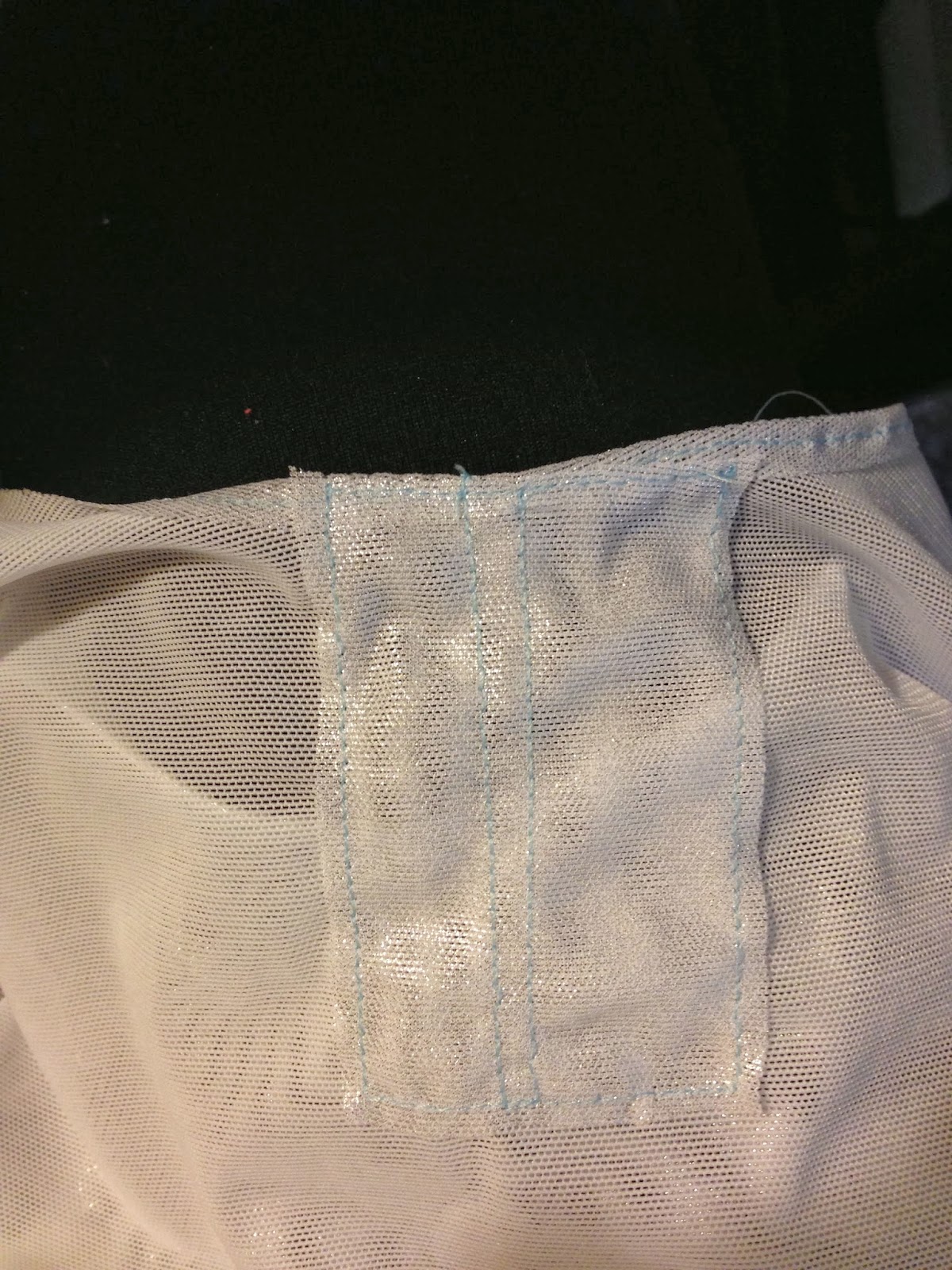 also, yes, i'm totally aware that this is far from perfect.  like, that little slit trick is way off center.  and the stitches are anything but straight.  but you know what?  it's just a costume, and as long as it fits and doesn't fall apart it's all good by me.

sewing the two pieces together to create that faux sweetheart neckline was a BITCH.  i likely did it all wrong, but whatevs.  it was done, and i had a completed bodice! 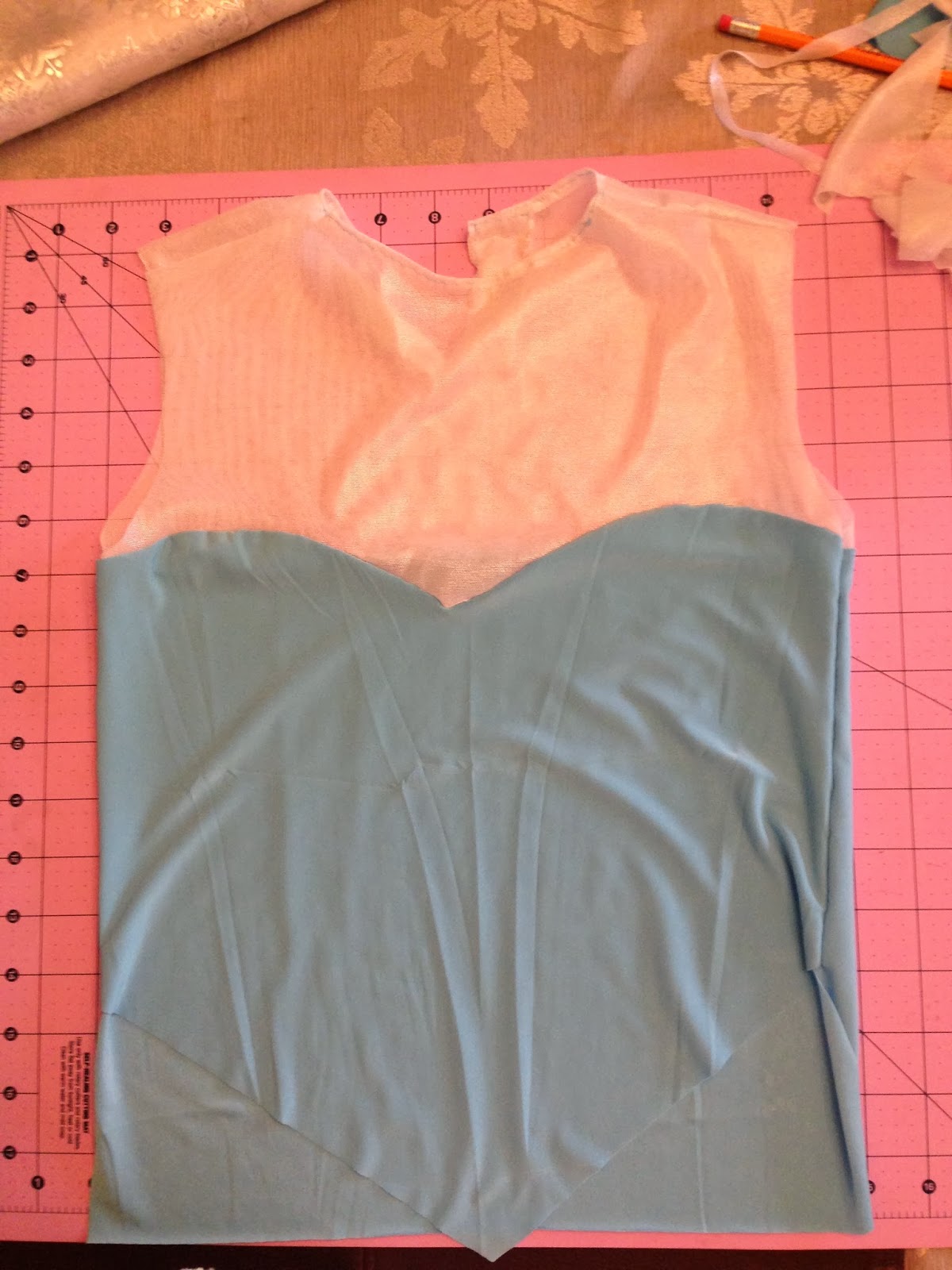 by the time i was done with it, the time had come to pick up the bean from school.  i had her try it on when we got back, and she was so stinking excited at the sight of what i was working on.  look at this smile - so worth the trouble. 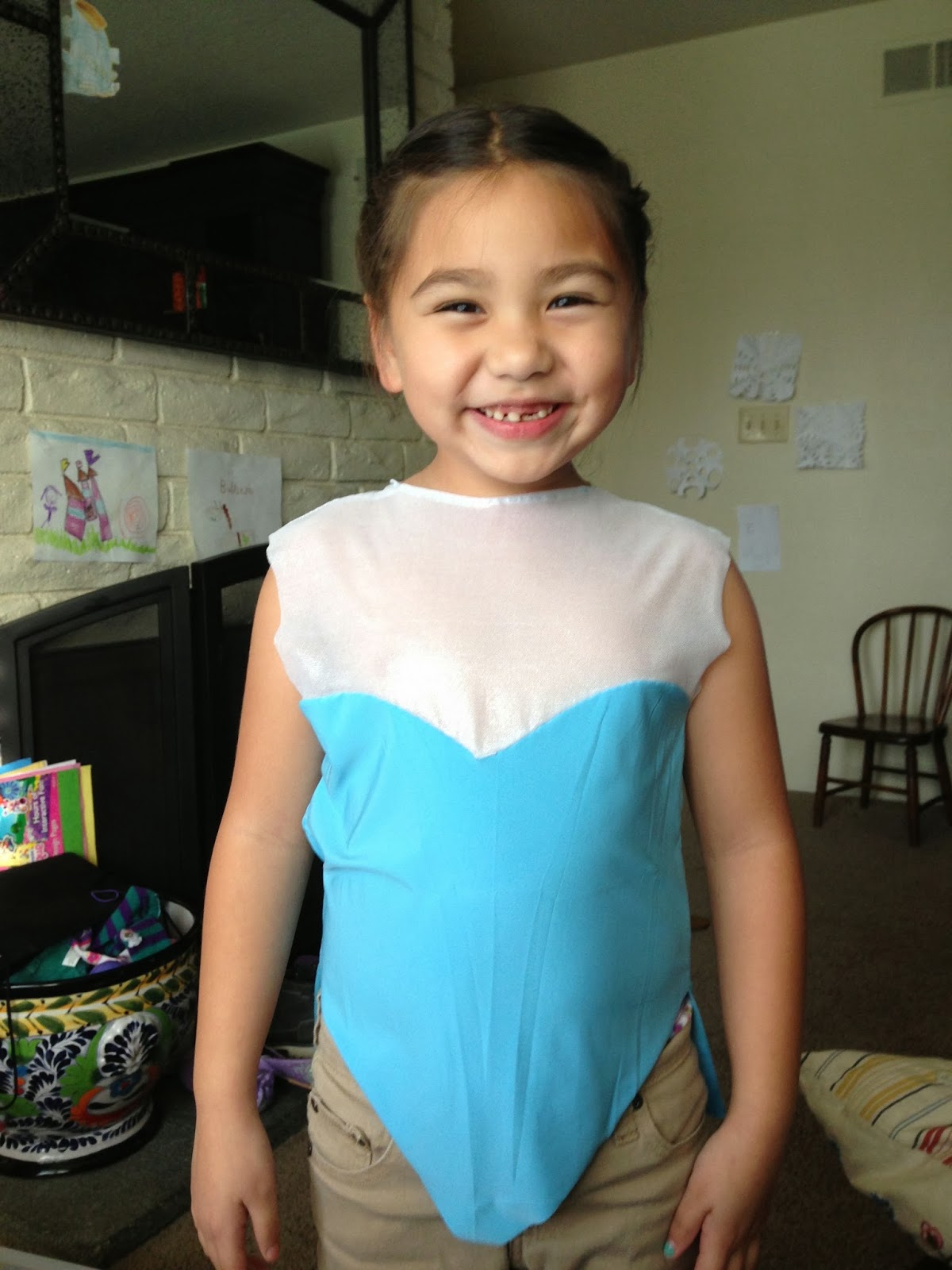 that's also when i realized that i'd totally overshot the measurements - and that the silvery white fabric was totally see-through.  oops.  but i figured she could just wear a t-shirt (and probably some shorts or capris) underneath, and all her private bits would be covered up.  crisis averted.

the rest of it was easy breezy.  i added the sleeves, the skirt, the sheer snowflake cape, and hand-sewed on the little snowflake brooch i'd found in my stash of crafty crap.  and voila: 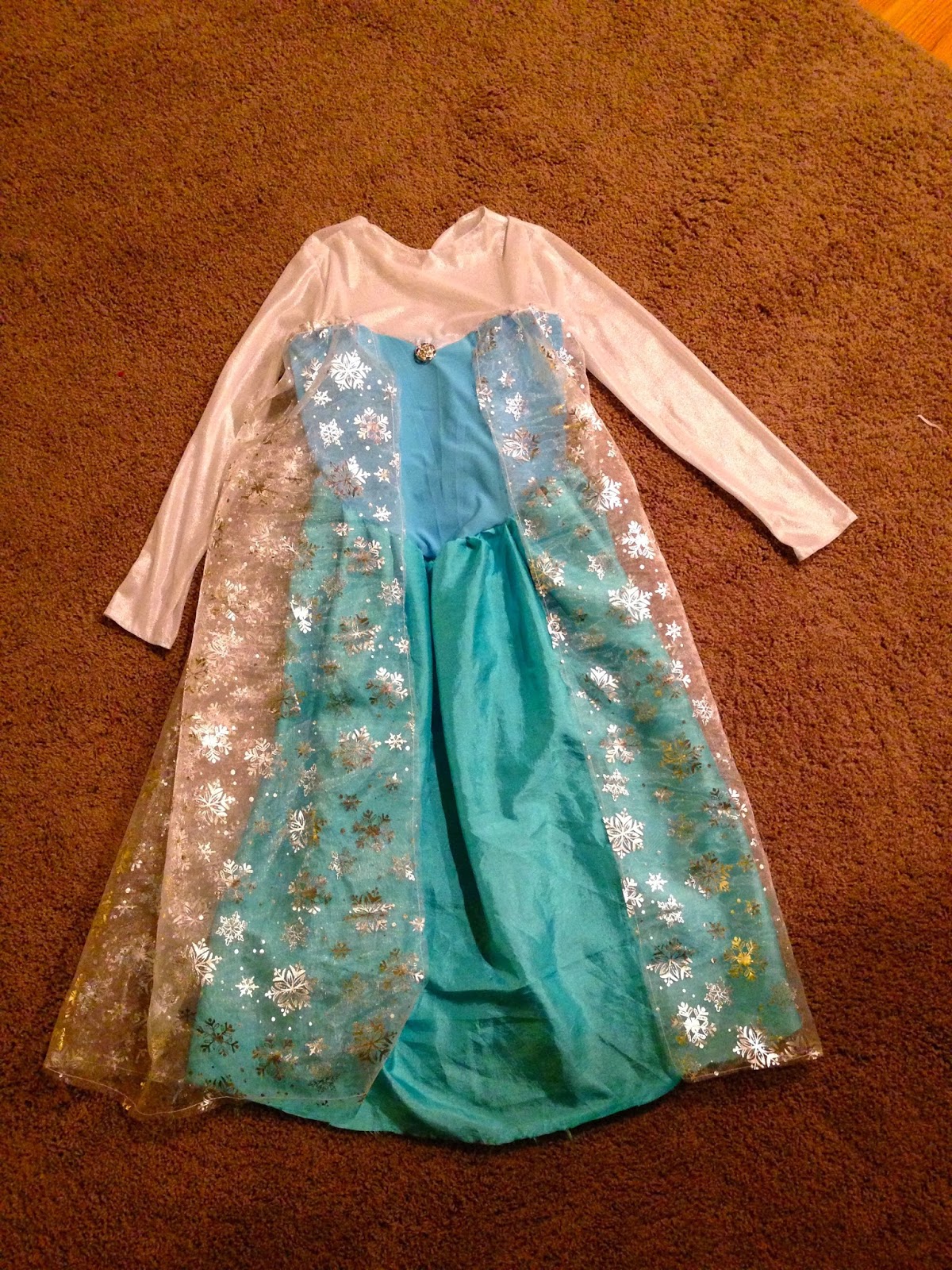 i'm pretty stinking proud of myself for pulling this one off.  it's far from perfect, and god forbid you should turn it inside out to inspect my handiwork, but it's good enough.  and with her elsa braid in place, the bean was one happy camper and all ready to strut her stuff at the birthday party. 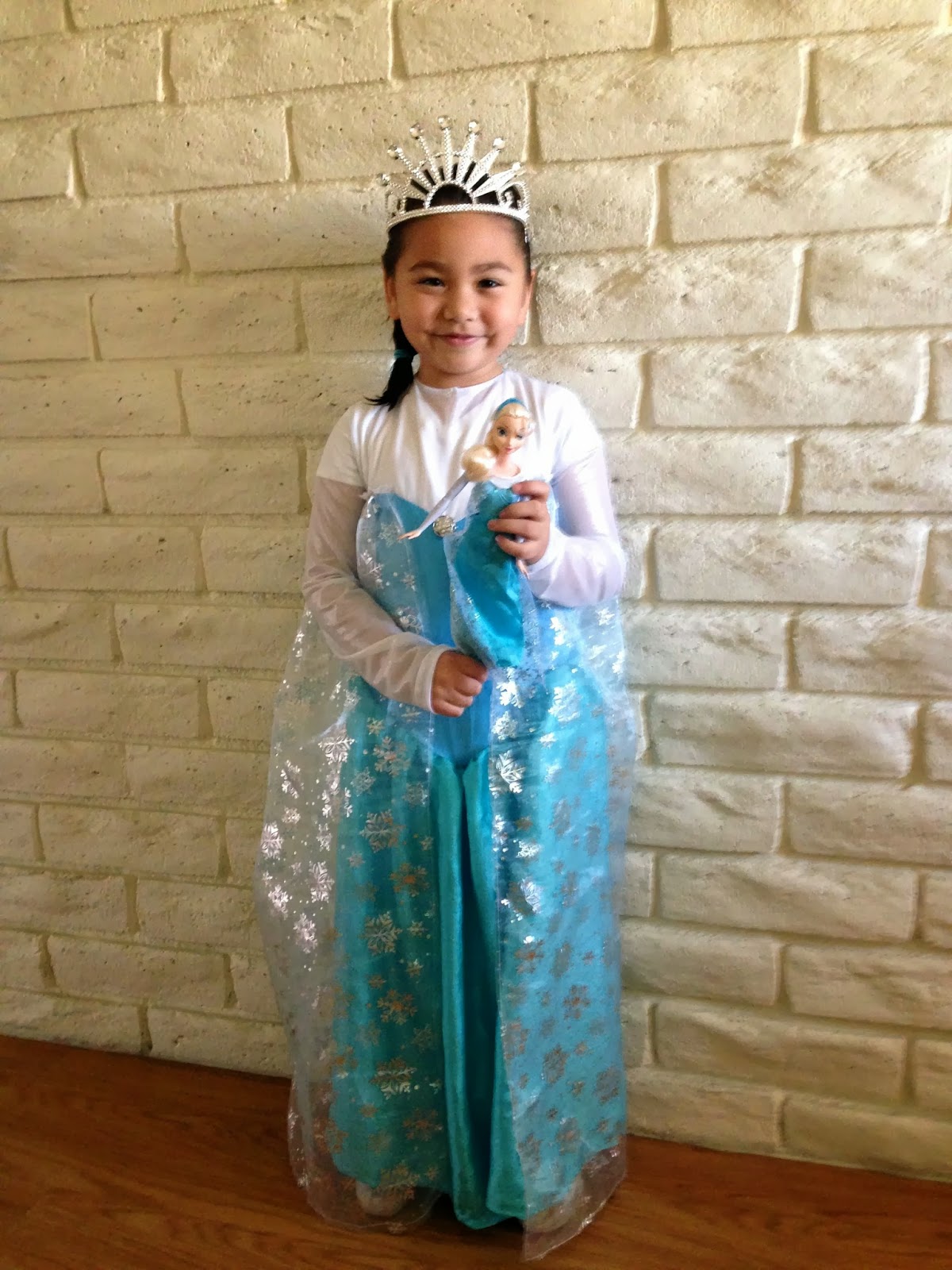 after i took this, she pulled the tiara off.  "what if there's a bouncer there?  i don't want to break my tiara while i jump," she said.  hey, who could argue with that logic?  i just hoped that the dress would survive said bouncer.  the stitches are pretty sturdy though (which i learned the hard way several times as i had to pull a few mistakes apart with my seam ripper), so i just rolled with it.

her little friend's mom did a great job of decorating their house for the party.  check out the birthday girl's throne: 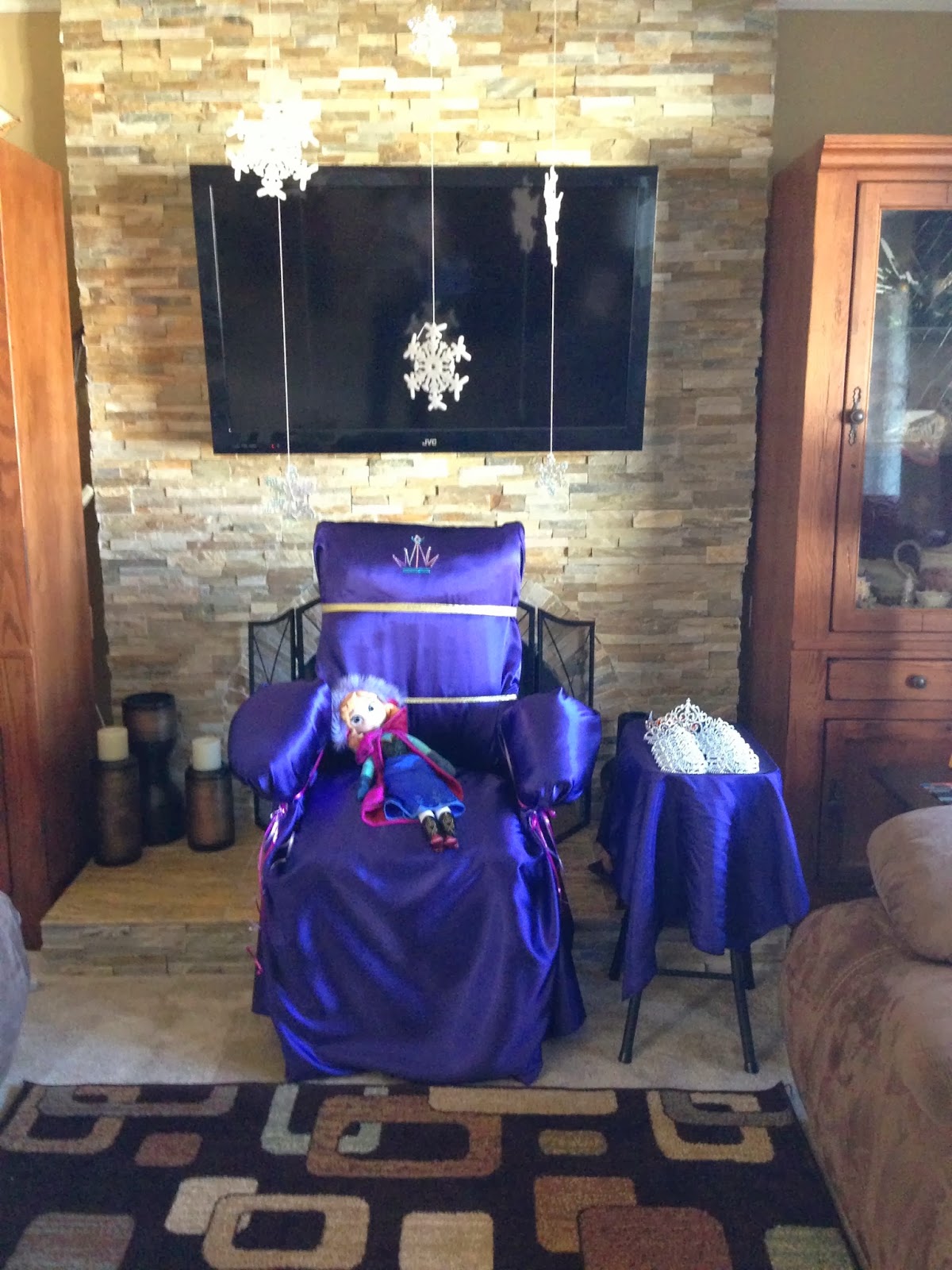 and her prediction was dead on. 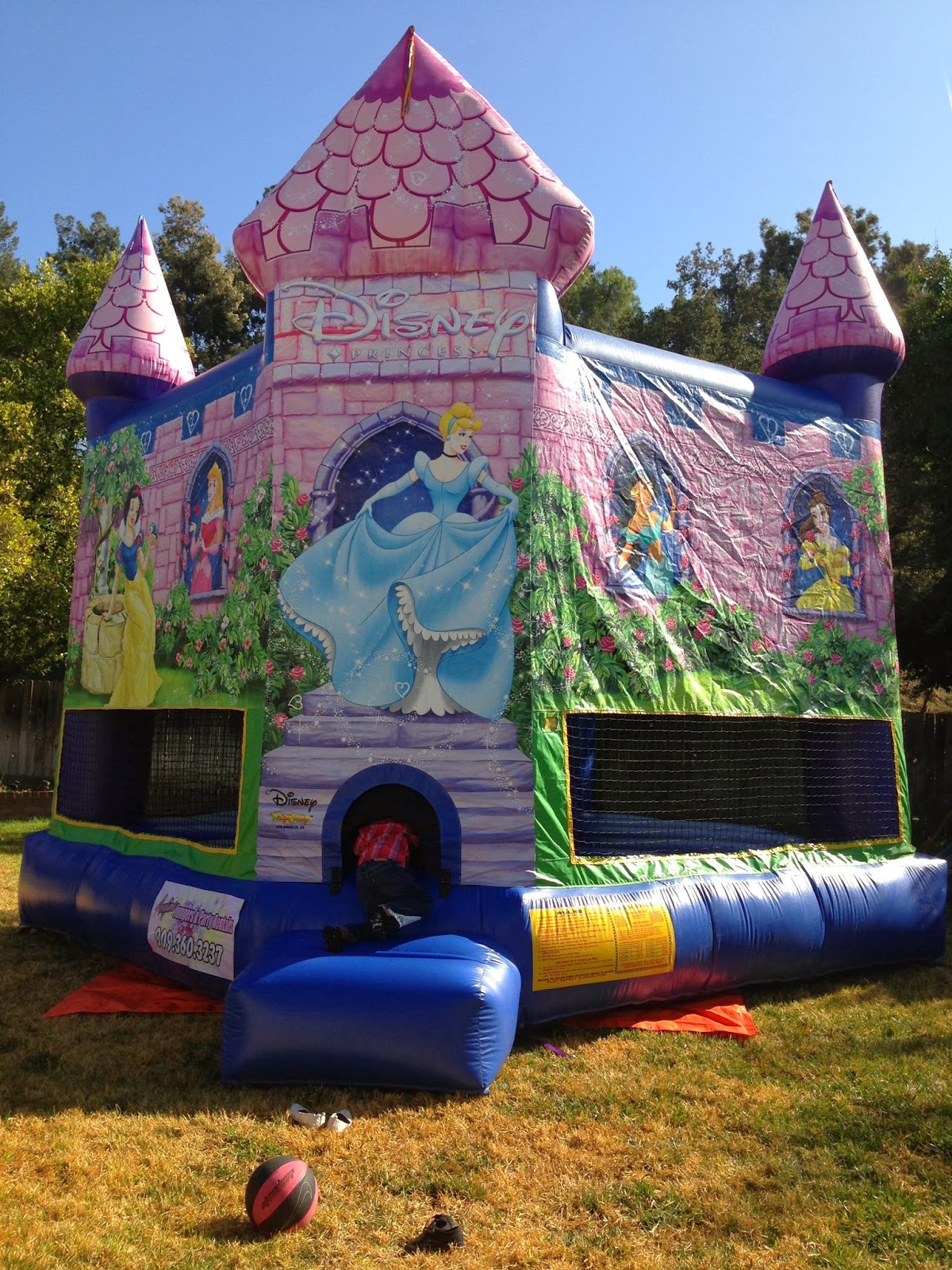 she had enough time to grab some lunch and get her jump on before a special guest arrived to entertain the masses. 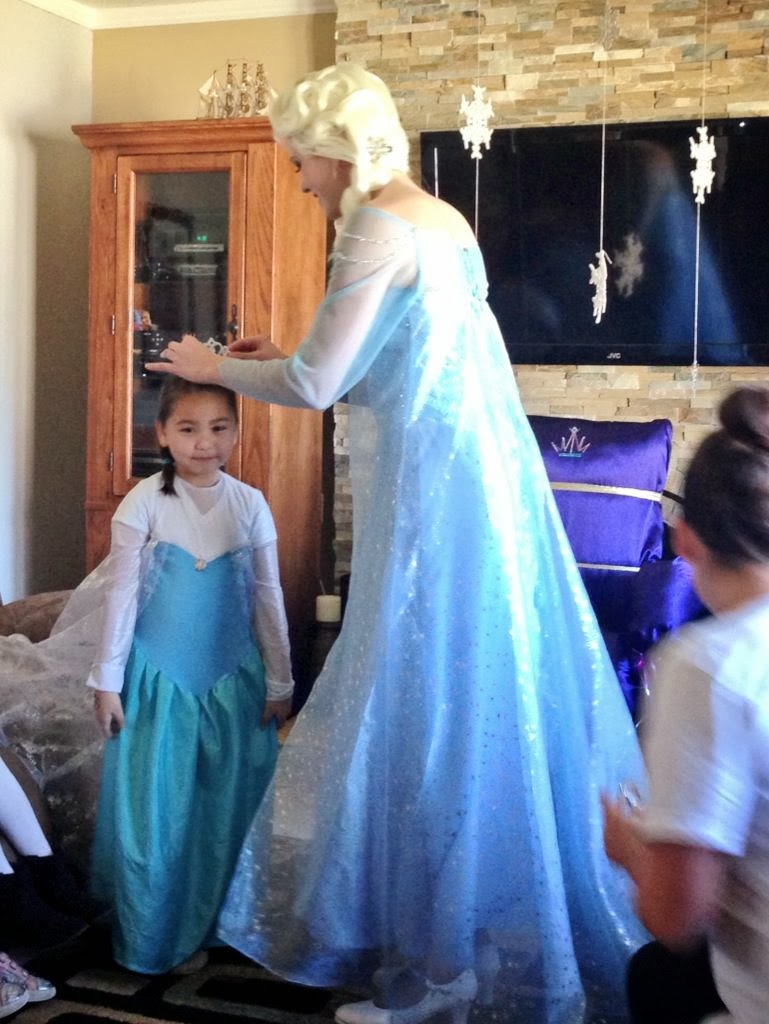 yup - those party companies are already fully armed with elsa and anna characters.  sheesh.  anyway, she ended up wearing a tiara after all: 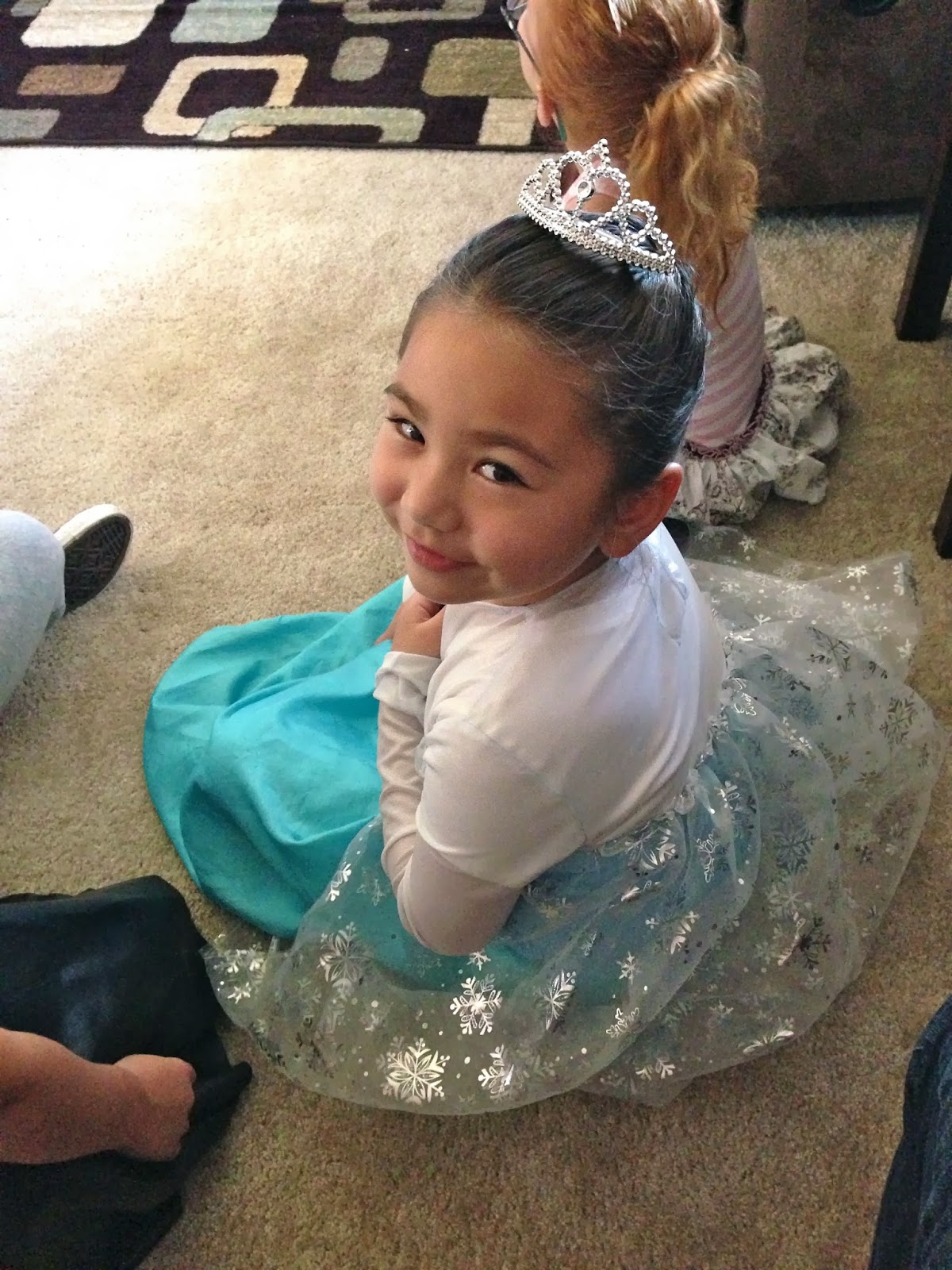 and there was jewelry and make-up, too. 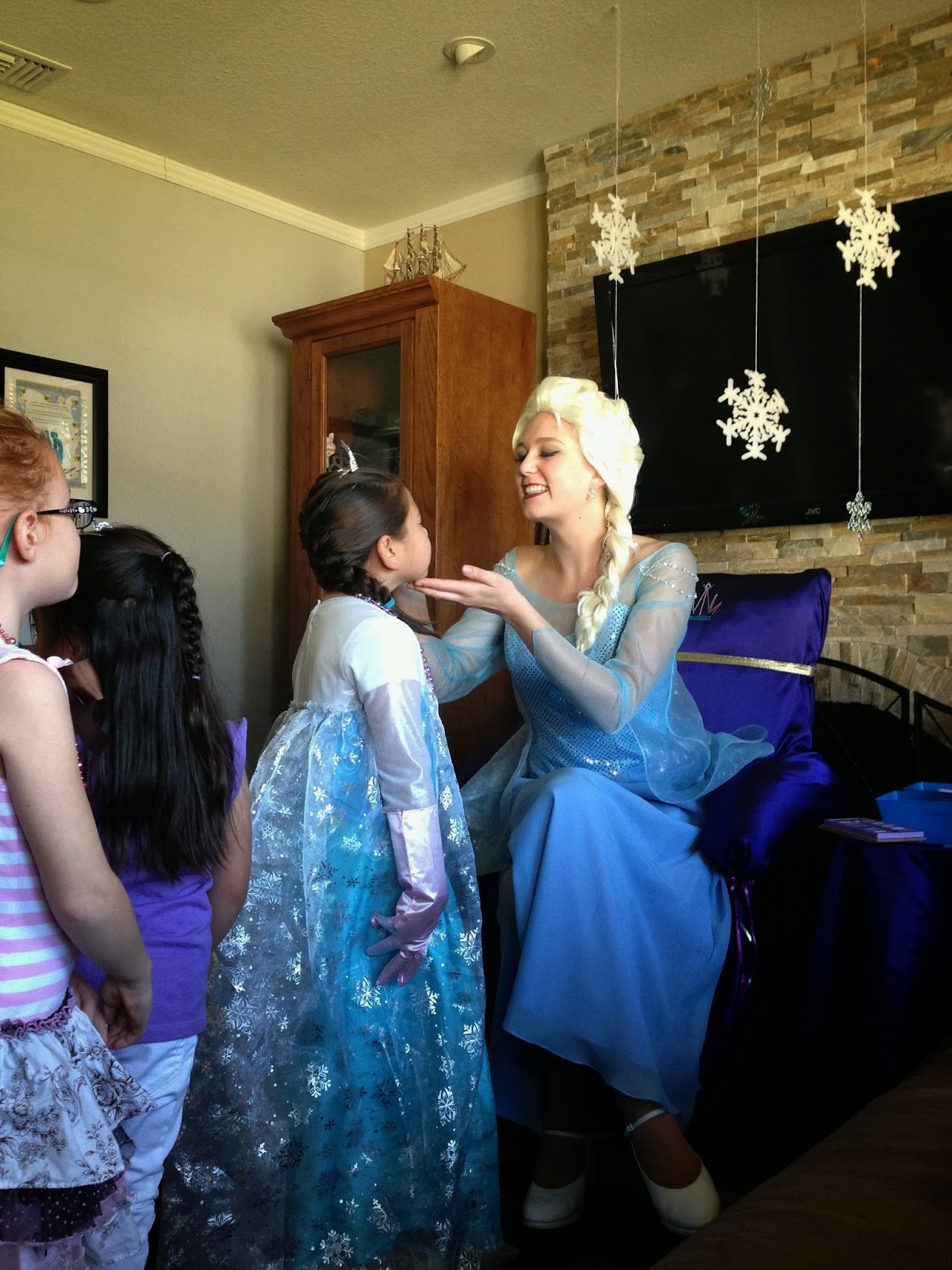 i may be biased here, but i think she looked better than the hired elsa. 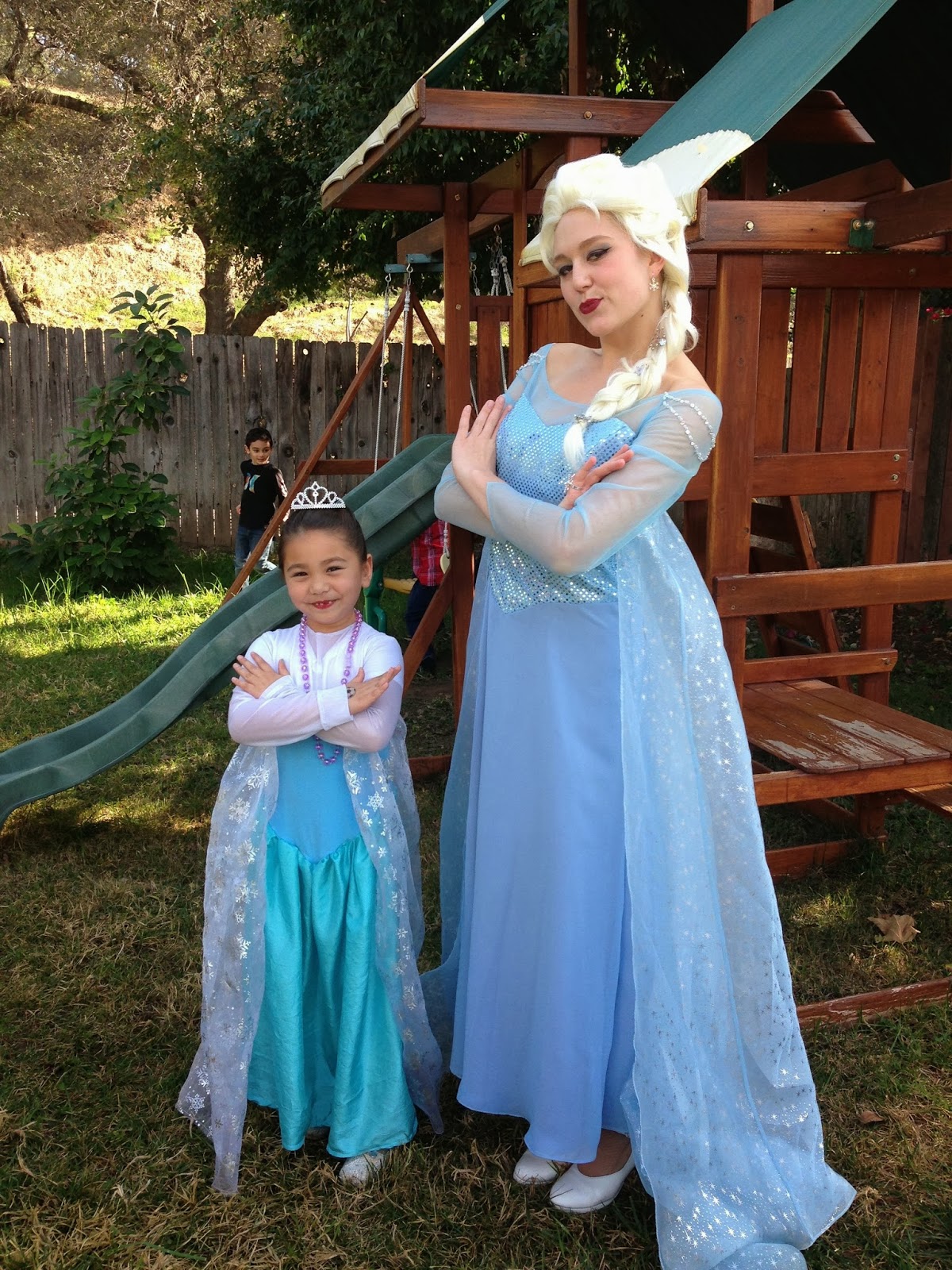