with the teen set to volunteer for a shift at the tinkerbell half expo and the bean out of school for a teacher in service day, we headed down to disneyland for the first time since early november. armed with the brand new annual passes we got from santa last month, the pri-YES was loaded down with three very happy campers.

as we turned onto disneyland drive, we were greeted by the start line for the weekend's activities. this was for the inaugural 10K, scheduled for early the next morning. 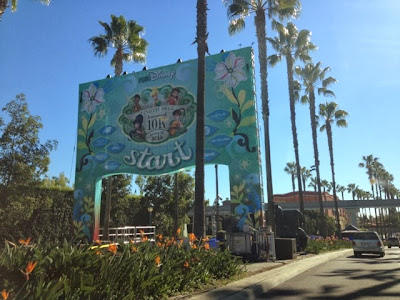 oh, foursquare. tell me something i didn't already know. 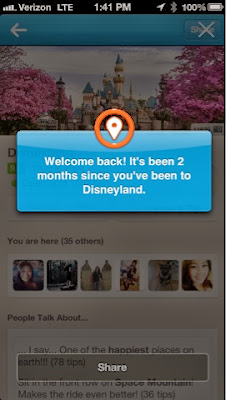 while our original plan had been to head to the parks for a little fun before heading to disneyland hotel for the expo, we'd run a bit later than we'd expected. so all we had time for was a quick stroll down main street before veering to the right and heading straight for the monorail station. it dropped us off at the far end of downtown disney, not too far from the hotel and convention center. 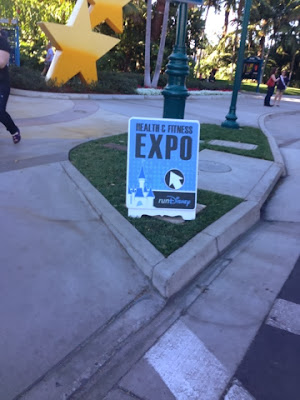 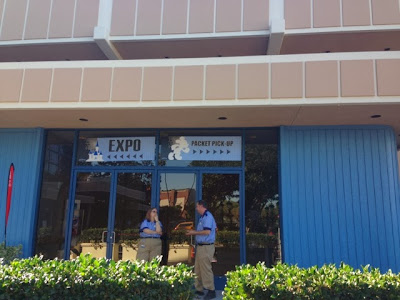 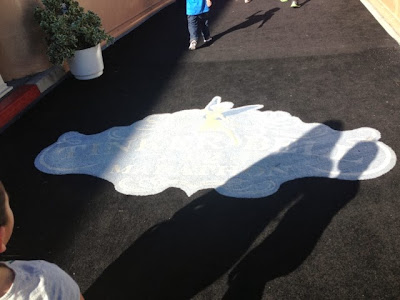 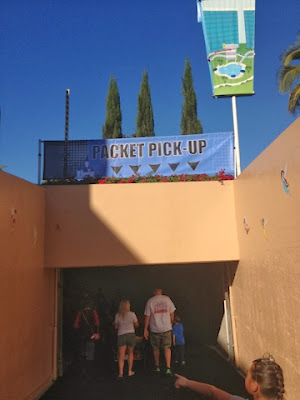 we parted ways with the teen when we got downstairs. she followed the signs to the volunteer check-in, while the bean and i got in the (blessedly short) lines to pick up our race bibs. 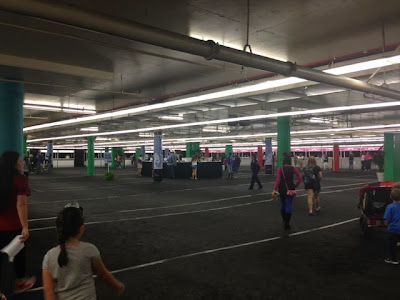 from there, we headed back upstairs to grab our race shirts and peruse the offerings at the expo. 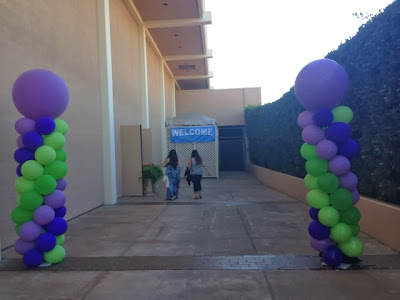 she thought her t-shirt was super cute. i sure didn't argue with her. 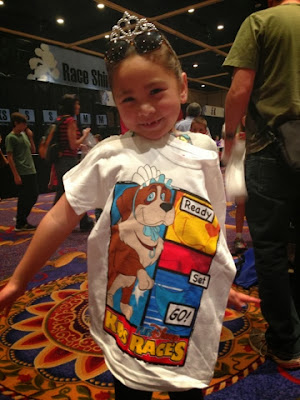 i tossed a quick longing glance over my shoulder at the new balance booth. this year's limited-edition run disney shoes had mickey and goofy options for men and cinderella or minnie for the women, plus kids' versions. but as most exclusive disney items do, they were in crazy high demand with people lining up at the asscrack of dawn to get a sizing/buying appointment. 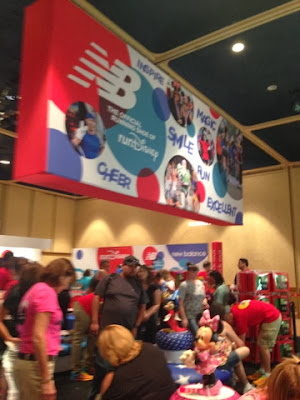 as we walked along, something here caught my eye: 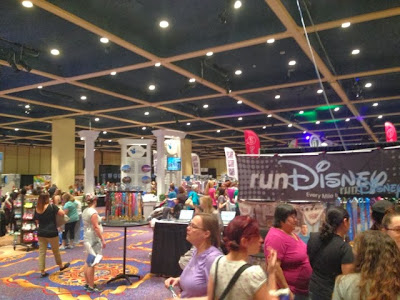 i was super bummed that i'd done the coast-to-coast challenge last year instead of this year. and why? well, because for 2014, if you do the tinkerbell and princess half marathons, your medal looks like this: 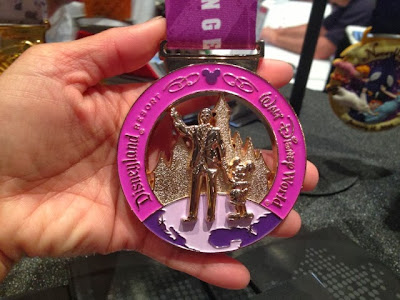 out in the hall, we decided to wait in the (again, blessedly short) line to take this: 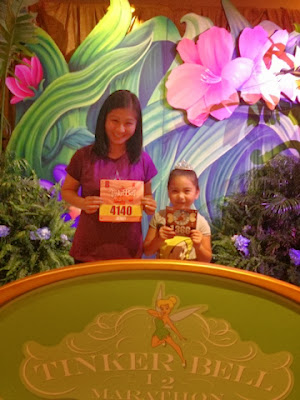 in the official merchandise area, i found myself getting totally suckered into stuff i'd thought i could avoid this year. i didn't think i'd want another "i did it!" shirt since i already had two from each of the other tink half marathons i've done. but those sneaky disney people must've anticipated this because this year's version was not only a brand new design but a tech shirt instead of the cotton tees offered previously. and the running hat was super cute this year, too.

oh, and the bean sweet-talked me into a little memento for herself, too. 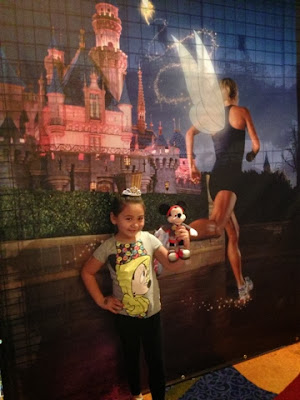 before i found more must-haves out on that expo floor, we skedaddled right outta there and into the hotel to kill a little time. my friend delovely details, who'd been there the day before and scored a jacket for me that was now sold out, was coming to bring it to me and then work a shift at the expo.

in the lobby, the bean ran into an old friend. 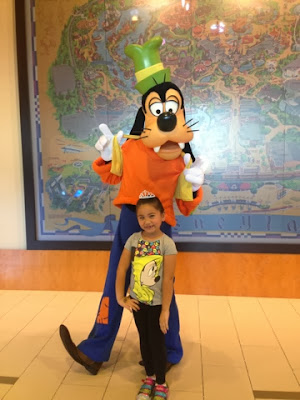 the waiting area at the registration desk offered fun seating: 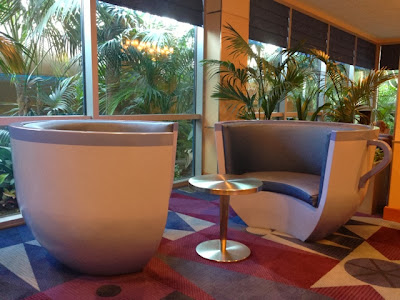 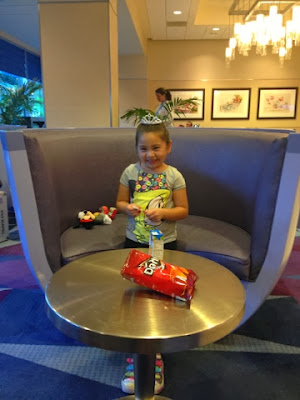 we strolled through the grounds, enjoying the lovely weather and each other's company. and took pictures. 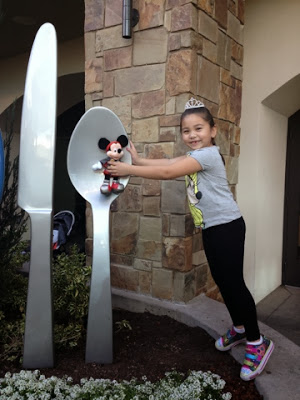 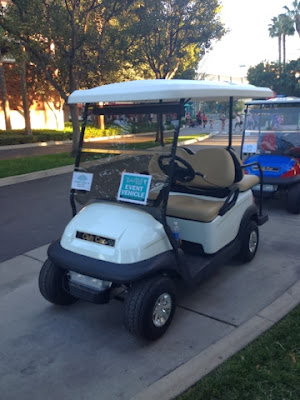 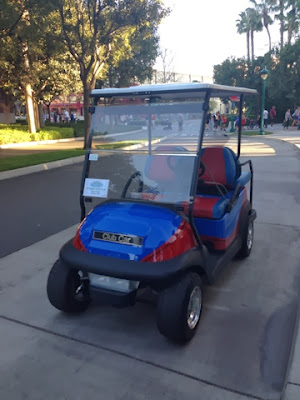 later, we made our way back into california adventure for a treat. 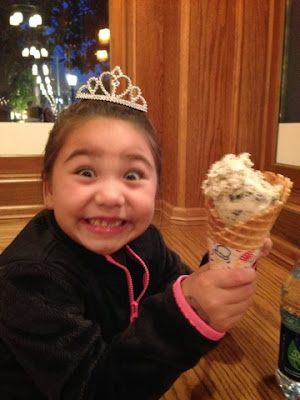 the teen's shift was scheduled till 8 that night, and her sister and i spent the rest of the time at the animation academy. she was excited to add more characters to her portfolio. 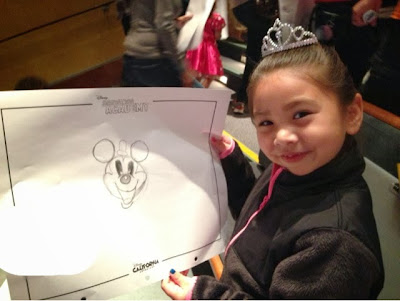 and okay, i may have been a little bit happy to learn how to draw olaf, the funny snowman from "frozen." 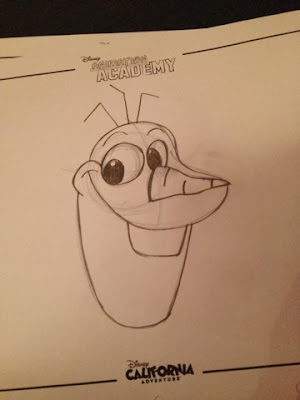 when we finally met up with the teen, i was bummed to hear that her experience was a little less than magical. because we'd both misread the fine print, she didn't end up receiving a free park ticket for her service. turns out she'd have needed to work TWO shifts to earn it. and she was also really annoyed at having been treated rather like crap by some of the run disney staffers. she said she was yelled at for things like daring to fold shirts on the table and having her back turned briefly as she reached for more work to do. i mean, god forbid anyone think she was ignoring them for half a second.

as it usually goes when working with the public, she encountered her fair share of rudeness from the people who were coming to pick up their race shirts. she got yelled at again, this time by expo attendees, for not allowing them to exchange sizes, pick up extra shirts, and other things that were explained in detail both on the website and in the race programs provided to all attendees. and while she's not necessarily put off of volunteering in general, this experience definitely soured her outlook on it a bit. ugh.

at least we capped off the day with dinner together in the parks and a view of the fireworks as we left for the night.
at January 23, 2014