= me hitting this table for some desperately needed equipment. 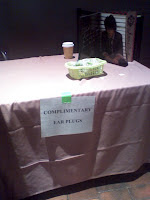 holy shit, people - i'm old. heh. okay, so i didn't actually USE the earplugs, but i scooped up a pair and stuck 'em in my pocket for just in case.

the kid was absolutely out of her head with excitement yesterday, anticipating being THISCLOSE to the jonas brothers. the gibson ampitheater is relatively small, compared to other venues like the honda and staples centers, and there's almost no bad seat in the house. plus, the tickets she and her BFF had were in the front row of her section (which was fairly close to the center), so they were excited about that too.

so we left my brother (he and o were going to spend the night and head out at the butt crack of dawn to go snowboarding - they were hoping to play in fresh powder and avoid crowds, since it's stupid bowl sunday) with the hub and the bean to bond, hopped in the car, and off we were to tween nirvana. 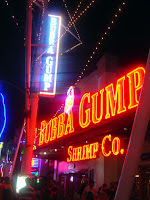 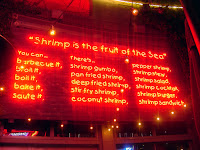 once we finally got to universal city and made our way through the traffic on the way to the parking lot (there had been an afternoon concert too, and the girls had fun screaming out their love for the "joe bros" along with the other tween-filled cars coming and going), we made our way through the citiwalk in search of food. the original plan was to eat at bubba gump, but that didn't happen since that stupid traffic left us with about 45 minutes before the show's start time, and there was quite a wait for a table. boo. i'd been looking forward to some shrimp, too. 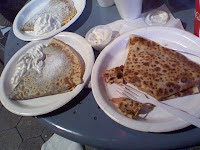 instead, we settled for the crepe cafe. i went for a ham and cheese crepe with some of their yummy fries and ranch dressing, plus a dessert crepe, filled with nutella. o and i decided to share our desserts because it was simply too difficult to choose between the nutella and dulce de leche crepes. the girls shared a chicken crepe and a strawberry-filled one for dessert, and everything was delicious - even though we had to eat it all huddled at a table outside, freezing our nuts off.

and as we waited for our crepes, the girls borrowed the pen i had in my purse and took the opportunity to decorate themselves with proclamations of love for their favorite brother - nick for the kid, and joe for BFF. "kevin's not that cute," they said. ha! they were cracking me the eff up with their enthusiasm. it reminded me of how i felt about duran duran back in the day ("i love simon!"  "no, i love simon.  you can have nick."  "no way!  i'll take john, then."). i never got to see them in concert, though. [sigh]
as we made our way towards the venue, we came across hordes of other giggling, decorated girls who were also on their way to the concert. i couldn't help but laugh my ass off at their antics, although i could totally remember doing the same shit. i guess i'm not THAT old.

and then we came across a concession stand, offering all sorts of tees, hoodies, posters, totes, etc. - of course, all emblazoned with the JB logo and various portraits. i stifled a snort at the "future mrs. jonas" tee and was actually surprised when the kid didn't choose it. she did go for the hoodie, though, and insisted on paying for it herself. i bought them both tees, which they immediately put on, and then they made a beeline for the KIIS-FM booth, where the band's music was blasting and girls were crowded around making posters to take to the show. i had them pose in front of the tour bus: 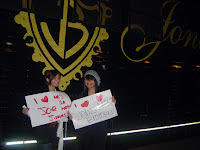 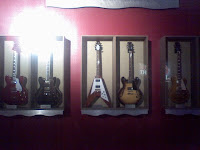 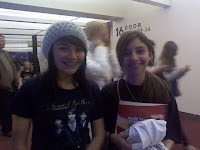 once inside, we split up and headed to our seats (i'd gotten two sets of two tickets, but not together), but not before a potty pitstop. and being the "gibson" ampitheater, the place was decorated with lots and lots of guitars. 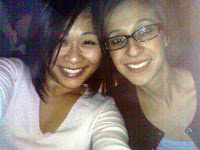 our seats were pretty far - way off to the right of the stage, and damn near at the very back. but as i said, the place isn't that big, so we still had a great view. and not more than five minutes after we sat down, the lights went out, the screaming started, and out from behind a plain white curtain, the band came running out and started to play. o and i got into the spirit, screaming and clapping and acting like fools, and watched the others around us dancing and singing along.

but a few things were...well, off.

i remarked "wow, this is a pretty low-budget show, isn't it?" and o nodded in agreement. "and they've got a pretty normal sound, not too pop-y," she said. then they did a few close-up shots on the big screens, and we noted that the guys looked older than we thought.
and then i saw it: 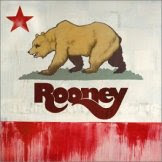 i pointed it out to o, we looked at each other in amazement, and cracked up. this wasn't the jonas brothers! it was the warm-up act! bwahahahahaha! oh mah gah, i'm still dying at the memory. so.damn.funny.

i texted the kid to be sure: "is this them?" and got an immediate answer: "PSH no!" i showed it to o, and we started cackling all over again.

and when they finished, the lights came back up and on the screens came scrolling text messages that audience members were sending via verizon. "scream if you love the jonas brothers!" (loud, shrill screeching) "i *heart* nick (or joe, or kevin)!" and there were even a couple of "nick, will you be my prom date?"s.  with every new text message that came on, a whole new group of girls was screeching loudly with delight.
all of a sudden, there was even more screaming than before, and when we looked down onto the floor, there was a major hubbub going on - girls running towards the center, flashes popping, and all i could see was a sheaf of long, blonde hair. paris hilton? lindsay lohan? britney? i couldn't figure it out.

one of the girls behind us was on her phone, talking to her friend: "ohmuhgawd, this is soooo cool. i wish you were here! too bad you didn't have any money. ooh, but guess who's here? you know that old guy who was the choreographer for "high school musical" - i think his name is kenny ortega? yeah, he's totally here. isn't that so cool?"

that didn't explain the blonde hair, though. i could still see her down there, posing and waving.

and then my phone buzzed with a text message from the kid:

just like that, in all caps, with a shitload of exclamation points. ha!

finally, around 9:30, the jonas brothers finally made their grand entrance. that plain, boring white curtain dropped to the floor, revealing a multi-tiered stage with slides and lights and more video screens. the girl sitting next to me (i guess i should just say "the girl whose seat was next to me," because she didn't sit the whole time) screamed her head off and shouted "damn, he is SO fucking hot!" hilarious. the audience went absolutely fucking NUTS. 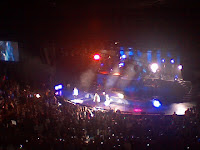 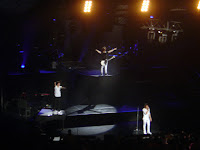 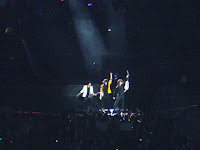 (i wish i had more pictures, but somehow i forgot my "real" camera at home and had to settle for crappy ass cell pics instead)
and i have to admit, their music is pretty likable and catchy. typical teenybopper kind of stuff, with lyrics about friends and girls and school. they introduced themselves (which was silly for 99.9% of the audience, but at least now i knew which one the girls were in love with) and played songs from their current CDs, plus a couple of new songs from the CD they're working on.

i was impressed with their talent, too - they each played several different instruments, from guitar (bass and lead) to drums to piano/keyboards. plus, they could sing, although the kid's favorite, nick, took the lead in some of the songs and kept losing his voice in parts. ah, puberty.  i giggled, the girls in front of and next to us got all sappy ("awwwwww, he's so cuuuuuuute!") and o and i just looked at each other and shook our heads.

when the set was almost over, they did the typical "thanks everybody, good night," the back-up band put their instruments down, and they did the faux "show's over" exit. of course, you KNOW they're coming back, because the theater is still dark and they haven't played their most well-known song yet. and thirty seconds later, a white piano appeared on stage and nick walked back out and sat down. "were any of you guys here for the afternoon show?"

i was shocked and awed to hear half the audience (including swoony girl next to me) scream "YESSSSSS!!" wow.  that's dedication - two shows in the same day.  dedication probably isn't even the right word.  i wonder what they had to do to get their folks to buy them those tickets.  i'm holding this concert over the kid's head for whenever she brings home a shitty grade - and yes, i know that's ass backwards.  shut up.  it works.

"that's so cool! okay, now who out there has had their heart broken?"

half the audience's hands shot up in the air. [snicker]

"well, i know what it's like to have a broken heart ("awwwwwww," said the audience), and i wrote this song to talk about what it feels like. you know that feeling when your world just falls apart around you?" and on and on.

seriously, folks, DEEP THOUGHTS about life and love. from a 15-year-old. to a crowd of girls mostly ranging in age from 8 to 17. it was too stinking funny, and i damn near busted a gut laughing over it all.

it was over not long after that, and we stopped for some caffeine at coffee bean before getting back into the car and driving home. and you'll never guess what we listened to all. the. way. home. ;)
rambled on and on by wan at 2:20 PM